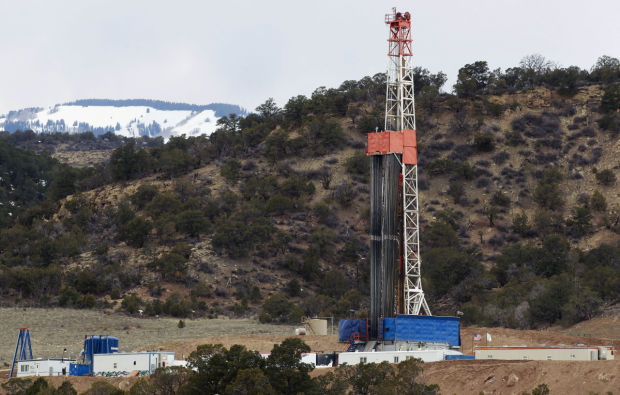 In this 2013 file photo, a rig drills for natural gas which will eventually be released using hydraulic fracturing, or fracking, on leased private property outside Rifle, in western Colorado. Once drilling is completed, wells are fractured to allow the flow of gas from deposits typically more than a mile underground. 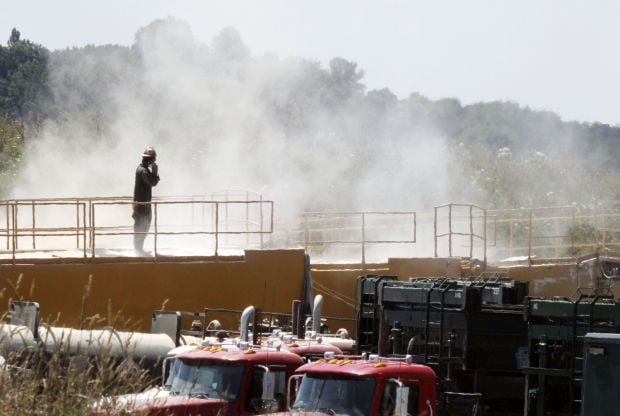 In this photo made on July 27, 2011, a worker stands on top of a storage bin as the dust of the powder used to make a mixture with water used in the hydraulic fracturing process in the Marcellus Shale layer to release natural gas billows above him at a Range Resources site where the process was underway in Claysville, Pa. 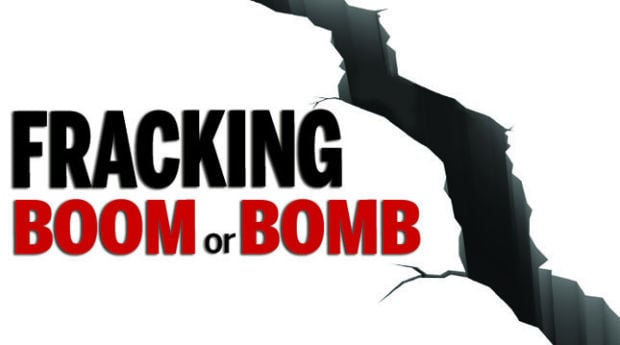 Plunging oil prices sparked largely by surging U.S. production on the global market are not expected to slow prospecting energy companies that have invested hundreds of millions of dollars in Southern Illinois.

Putting aside current and any future litigation to fight fracking, the controversial drilling practice, the forecast for high volume horizontal hydraulic fracturing in Southern Illinois calls for drilling to start by mid-year in 2015, now that Illinois rules governing the practice passed the last legislative hurdle in November, clearing the way for permitting to begin.

An appeal of a judge’s denial of a preliminary injunction seeking to halt permitting is expected to soon be heard by Fifth District Appellate Court justices in Mount Vernon. A spokesperson for the court said the hearing has yet to be scheduled.

But when it comes to oil prices, now in the $60 per barrel range, down from more than $100 per barrel six months ago, energy companies are not yet turning their backs on the region because of the less profitable market.

“We are going to continue with our evaluation in Illinois even at these prices,” said Mark Sooter, business development manager of Woolsey Operating Co. The company’s sister corporation, Woolsey Energy, is a leading holder of oil and gas leases in the region.

“For our particular company, it is not going to slow us down,” he added. The company is now conducting exploratory vertical drilling to determine resource levels and does not anticipate horizontal production until the second quarter of next year. It has yet to apply for a state fracking permit.

U.S. crude oil production has skyrocketed, now primed for a predicted output of 9.3 million barrels per day, the highest annual average since 1972, according to a U.S. Energy Information Administration forecast earlier this year.

Couple that with global production — including a decision in November by member states of the Organization of the Petroleum Exporting Countries to maintain production at 30 million barrels a day — market prices for crude have plummeted to a five-year low this week, falling between 30 and 40 percent since June.

The drop is not without its impact. ConocoPhillips, a major U.S.-based international oil producer, announced this week it would cut capital spending by 20 percent next year to $13.5 billion.

For companies with interests in the Southern Illinois basin, it remains to be determined just how profitable the New Albany Shale oil reserves might be, which for the time being remains a speculative market.

It all depends on how much of the black gold there is, how much it will cost to extract the commodity and at what price it is selling for at the time, Sooter said.

Fracking, as the drilling practice is commonly called, has led to an unprecedented surge in U.S. production, tapping into reservoirs that could not previously be reached through conventional vertical drilling, the Congressional Budget Office reported Tuesday.

The same goes for natural gas plays in the basin, another commodity saturating the energy market because of fracking and lowering prices.

“That heightened productivity has increased gross domestic product and will continue to do so,” the CBO stated.

Just how far prices have to drop before companies say never mind to Southern Illinois continues to be a question, said Executive Vice President Brad Richards of the Mount Vernon-based Illinois Oil and Gas Association. Right now, it is too early to tell where prices in the volatile market will be in six months and, depending on volume, whether Southern Illinois fracking will be feasible, he said.

For the time being, companies are expected to continue their homework.

“My expectation is we are going to see the companies that have invested these hundreds of millions of dollars in Illinois continue with their exploration,” Richards said.

Sooter noted the break-even point fluctuates from one shale operation to another, largely because of variations in resource accessibility and what it costs to reach those reserves, he said.

He pointed to the Eagle Ford Shale in South Texas as a good barometer of how far prices could drop before halting production, putting the price per barrel at around $55. Other shale plays need higher prices — some at $80 — to remain economical, he said.

The New Albany Shale reserves, he noted, are likely around 5,000-feet into the ground, whereas other shale plays are much deeper, some as much as 15,000 feet.

No one is panicking yet, said Seth Whitehead, an Illinois field director for Energy in Depth. EID is the research and educational arm of the Independent Petroleum Association of America.

“Everyone remains committed that has come into Illinois. They have waited a long time already. I haven’t seen any indication that they are going to jump ship,” Whitehead said. “There isn’t going to be a panic.”

In six months, the volatile market could change. OPEC, for instance, could change its strategy on market share capitalization and lower production if it sees no dampening on U.S. supplies, particularly if American consumer demand for the supply remains strong at lower prices.

Gasoline, for instance, is now projected to average $2.60 a gallon in 2015 across the country, raising prospects of increased use, according to federal reports released this week.

Former Rep. Mike Bost, who is now preparing to be sworn into Congress next month, expressed frustration with the year and a half it took for Springfield to finalize rules after Gov. Pat Quinn signed the fracking bill in June 2013. Bost was a leading sponsor of the bill, as were other Southern Illinois legislators.

Quicker action in Springfield may have led to sooner capital outlays for fracking and, in the least, reduce some of today’s hand-wringing over oil prices, the Murphysboro Republican said.

“Since they haven’t started and with the prices falling, sure there is a concern. The concern is they associated the amount of profit they would have made before … but if those prices continue to fall you would see their interest wane and then stop expansion for a while,” Bost speculated.

Regardless of what happens with prices, opponents of fracking are not taking pause in their efforts, including grassroots group Southern Illinoisans Against Fracturing our Environment, which filed a November lawsuit against the Illinois Department of Natural Resources and sought the injunction against permitting.

“We are very happy to see that the price of oil has had an impact around the country, and we are sure that will continue,” SAFE spokeswoman Annette McMichael said. “However, that does not slow us down from our community efforts to ban fracking in the state.”

SPRINGFIELD — Two months since Illinois enacted rules for high-volume oil and gas drilling, no company has applied for a state permit to put h…

How to decide whether to get a debit or credit card

How to decide whether to get a debit or credit card

In this 2013 file photo, a rig drills for natural gas which will eventually be released using hydraulic fracturing, or fracking, on leased private property outside Rifle, in western Colorado. Once drilling is completed, wells are fractured to allow the flow of gas from deposits typically more than a mile underground.

In this photo made on July 27, 2011, a worker stands on top of a storage bin as the dust of the powder used to make a mixture with water used in the hydraulic fracturing process in the Marcellus Shale layer to release natural gas billows above him at a Range Resources site where the process was underway in Claysville, Pa.