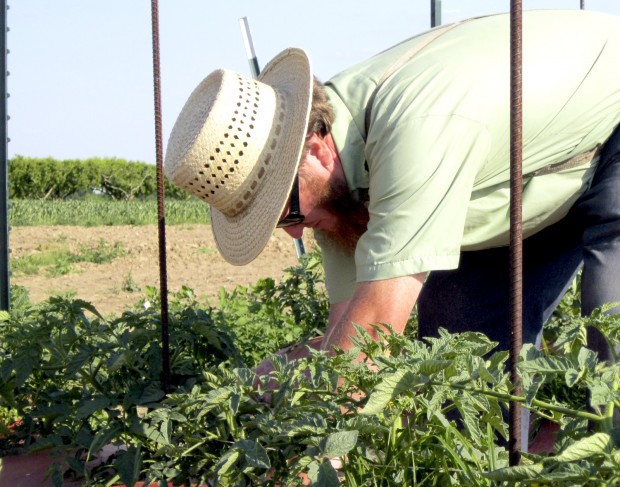 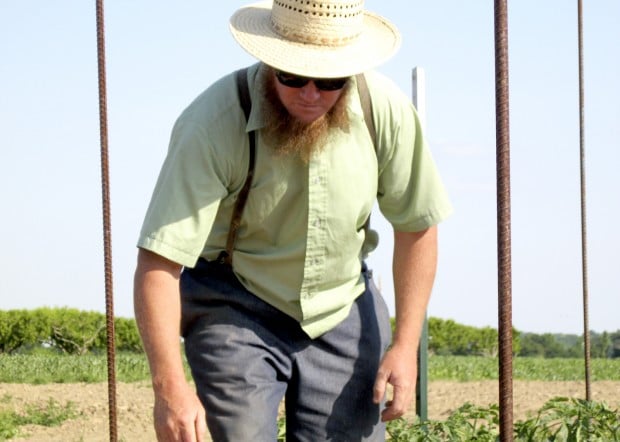 BY SCOTT FITZGERALD, THE SOUTHERN

Joas Troyer and Warren Yoder point at a small produce acreage while they identify a multitude of vegetables grown on such plots at their Echo Valley Orchards, south of Carbondale off Dutch Ridge Road.

“Based upon the price of fruits and vegetables coming 1,500 to 2,000 miles away, this is a superior product,” Troyer said. “There is such a positive effect to buy locally grown. It’s such better quality for a few cents more.”

Troyer’s statement about buying locally grown produce is no longer an idealistic dream spoken by independent producers. Consumers are swaying more toward locally grown, according to the University of Illinois Extension Service.

Growers such as Troyer and Yoder say they are enjoying new heights of success and finding new markets for their mainstay crops of peaches, apples and strawberries while expanding their harvests to include a variety of vegetables.

SIU, for example, purchased 1,000 quarts of strawberries from Echo Valley in 2011 and returned this spring with an increase in their order, Troyer said.

Consumers visiting Echo Valley’s roadside stand during the warm weather months are saying they are freezing more of their purchases to have for the winter months, Troyer said.

“With just 20 acres, there are a lot of things you can do with high value vegetable crops. This is a changing time in agriculture. There are more opportunities now,” said John Pike, a U of I Extension educator for local food systems and small farms in Franklin, Jackson, Perry, Randolph and Williamson counties.

“It’s not the amount of acreage that ensures profitability. It’s the quality. Ten to 20 years ago, it was hard for independent producers to compete with commercial growers because of economies of scale. But that’s no longer the case. Consumers are more curious about how, where and who is producing their food. They are demanding in some instances,” Pike added, noting major retailers are enlarging their locally grown produce sections.

Although it’s been a hindrance to the general public’s pocket book, rising fuel costs have actually benefited smaller growers because of the extra expense large commercial growers in California and Florida incur in trucking their produce throughout the country.

“Transportation cost is the biggest component of the total price. The fact transportation is going up for everyone has created more opportunities for local producers. As fuel prices have increased, it has put local producers on a more level playing field,” Pike said.

Even though Troyer and Yoder have seen fuel prices nearly double in a four-year span, they said the highest cost of their operation is labor, which has increased by about 30 percent during the same time.

“Everyone wants a higher wage. The state minimum wage has gone up,” Yoder said.

Sometimes hidden factors related to profitability come into play. This year for Southern Illinois independent producers, it’s been the weather with a mild winter and dry spring absent of freezes.

“This spring has been super crazy,” Troyer said about finishing the strawberry harvest recently, three weeks ahead of schedule.

Peach harvesting begins this month, two weeks ahead of schedule. Echo Valley, like other local orchards, is opening its roadside stands before the end of the month.

When it’s hot and humid, produce acreage becomes a breeding ground for fungus and other diseases. Fortunately, there have been minimal mornings this spring with heavy dew, Pike said.

Richard Kelly still keeps a handwritten tally of each’s day’s business in a ledger book, just like his dad taught him to do at Kelly’s Big Star.

DETROIT  — Rivian Automotive Inc. beat the Detroit Three to market with its all-electric pickup truck the R1T, which started rolling off the assembly line Tuesday, according to CEO RJ Scaringe's Twitter feed.

The news surrounding SIU athletics has been tough to watch, especially as allegations of inappropriate behavior by male sports coaches come to light.

Walt Breitinger: Oats blow up; Watch out for farmers

The crazy wild explosion in oats continued this week, with oats climbing an unprecedented $.60 per bushel over corn. It’s counterintuitive for…

Joe Szynkowski: How – and why – to start a freelance business

When I ghostwrote the book “Freelance Nation” back in 2015, the gig worker was just beginning to be recognized as a viable professional.

Amazon on hiring spree in Illinois, other states

Amazon wants to hire 125,000 delivery and warehouse workers and said Tuesday that it is paying new hires an average of $18 an hour in a tight job market as more people shop online.

Watch now: 60 million Americans who got the Pfizer COVID shot can get a booster