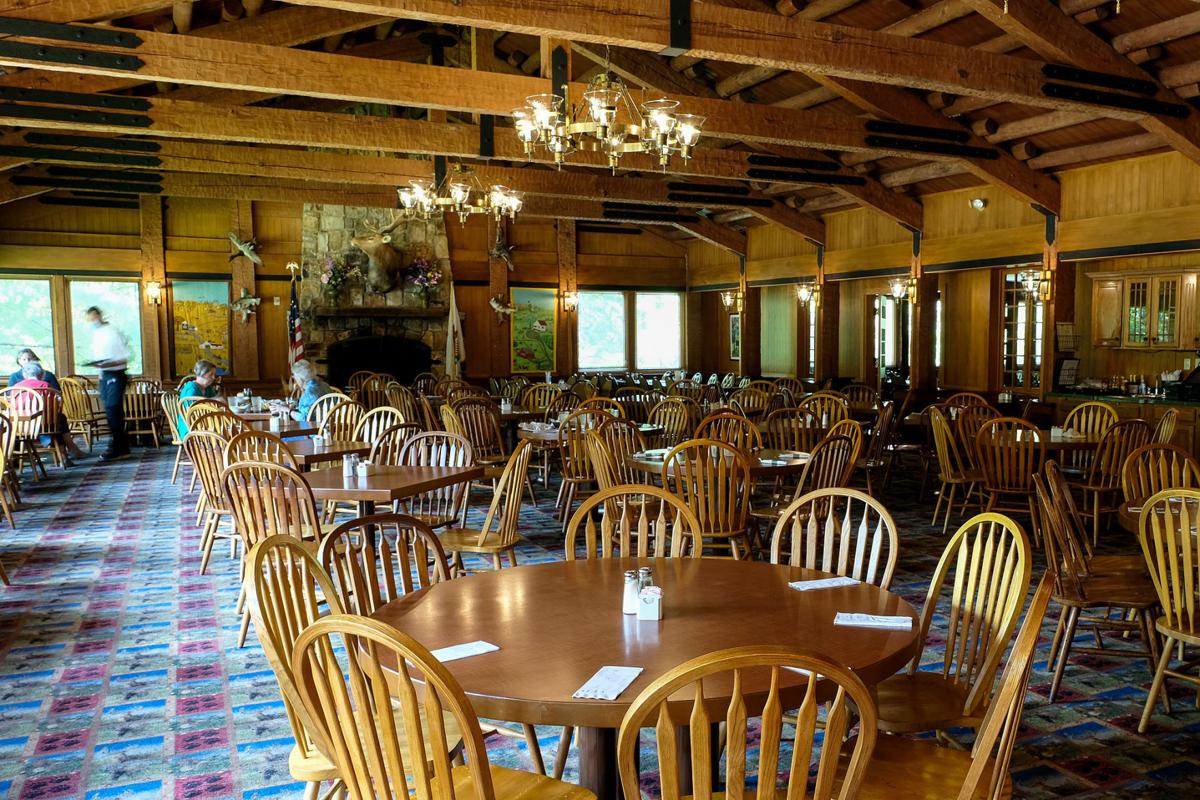 The Bald Knob Dining Room at the Giant City Lodge was renovated and expanded in 1985 and is home to the famous all-you-can-eat family-style chicken dinner. 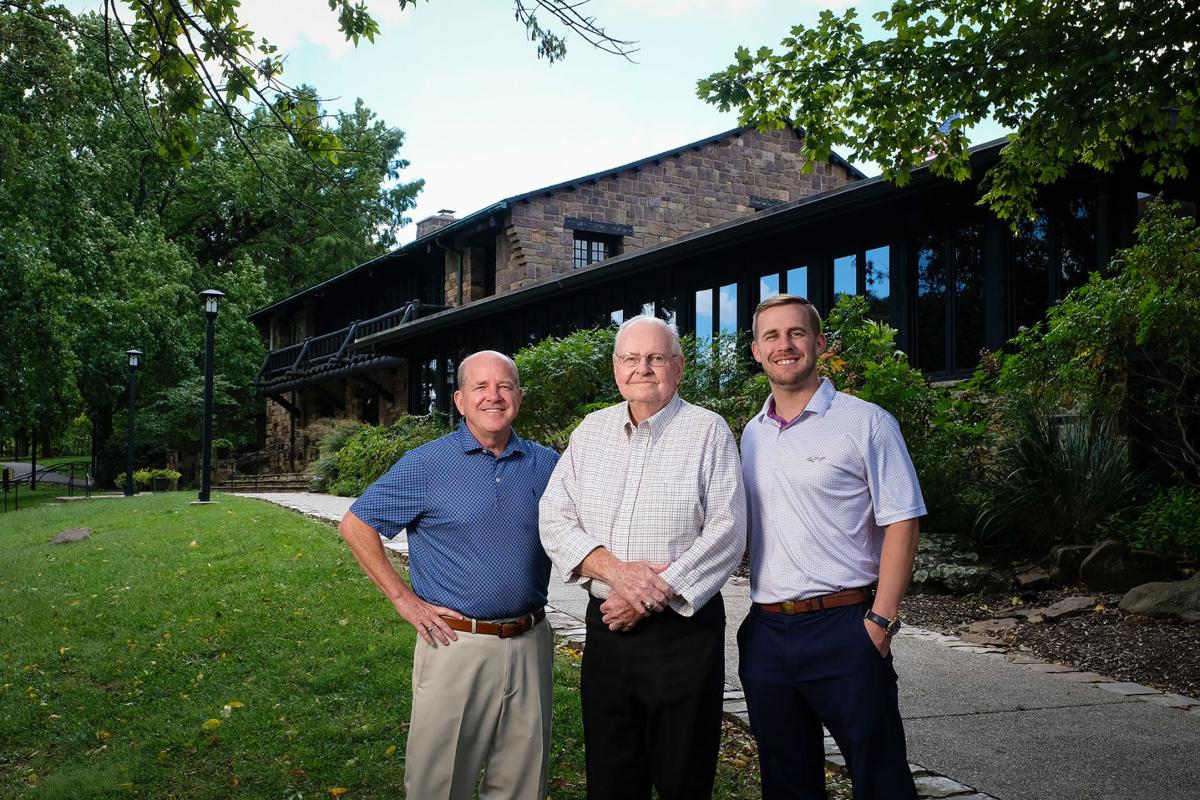 Three generations of the Kelley family Mike, from left, Richard and Mikey are involved in the management of the Giant City Lodge in Giant City State Park. The Kelleys have managed the lodge since 1981. 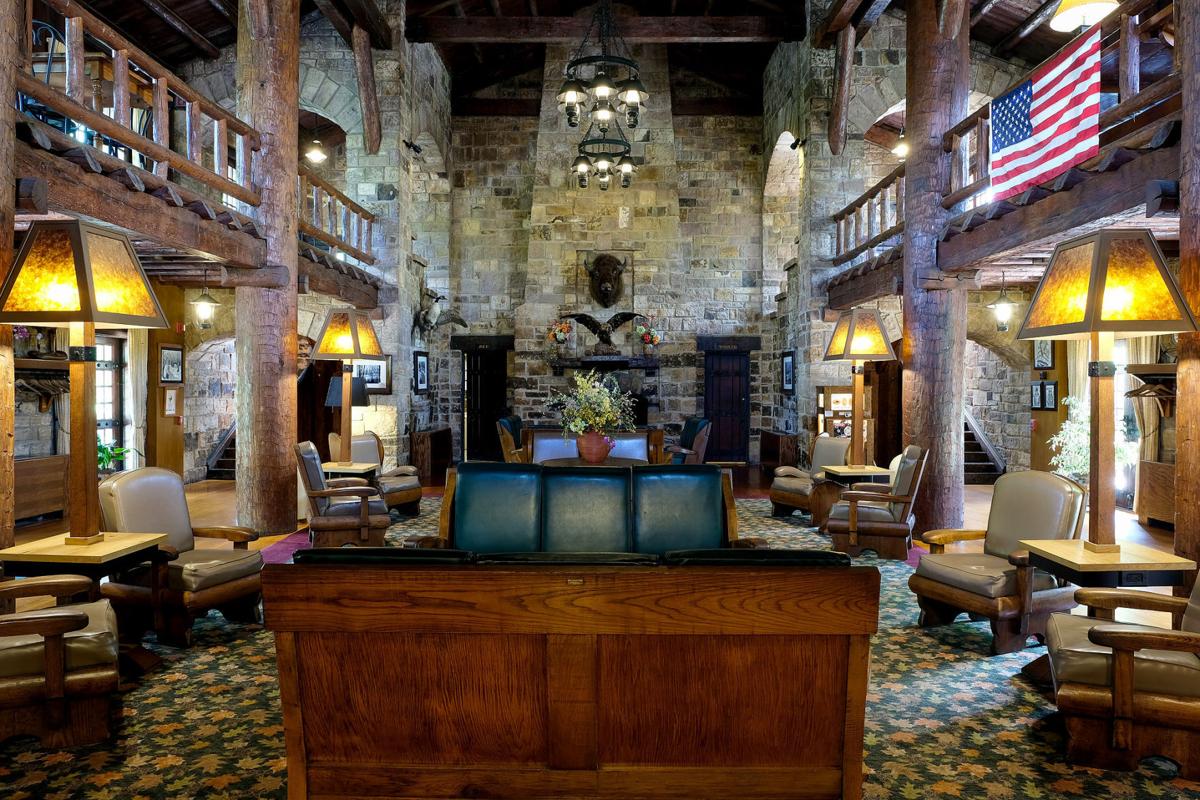 The Giant City Lodge was built in the 1930s by the Civilian Conservation Corps and has been managed by the Kelley family since 1981.

MAKANDA — Richard Kelley learned to work hard from his father in the family’s grocery, Kelly’s Big Star. It’s a trait he that helped him get the contract to run Giant City Lodge and cabins 1981.

This year, the Kelly family is celebrating their 41st year of offering Southern Illinois hospitality at its best at one of the region's favorite spots.

Richard’s son, Mike, was 19 when they got his dad was licensed to run the lodge.

Richard Kelly was a mess sergeant in the Army and had been around food all his life. Applying for the license to run the lodge seemed natural for him.

“We did a lot of cleaning and took some screens off windows to brighten up the place. We opened on March 1, 1981,” Mike Kelly said, adding that they shined it up, turned on more lights and made the lodge more welcoming to visitors.

Mike and Richard Kelly have been at the lodge almost daily since opening.

“Dad was a forward thinker. After two weeks of getting overwhelmed on Sunday lunch, he decided we would just do the chicken dinner,” Mike Kelly said.

That decision enabled the lodge to serve a larger number of people each Sunday. Today, the lodge’s famous family-style fried chicken dinner is still the menu for Sunday lunch.

Illinois to invest over $40 million in workforce training

SPRINGFIELD – Gov. J.B. Pritzker announced Thursday that the state will award more than $40 million in workforce training grants, focusing on …

“That was a really smart move,” Mike Kelly said.

However, he wanted to make it clear that fried chicken dinners are available for lunch and dinner every day at the lodge. Guests may also order off the menu throughout the week, but the fried chicken is definitely the favorite.

In the mid-1980s, the late Gov. James Thompson’s Build Illinois Plan expanded the lodge. Giant City Lodge doubled in space, but Mike Kelly said it allowed them to triple their business and do bigger parties and meetings. The dining room itself went from a 200 person capacity to seating for 400.

In addition to expansion of the historic lodge, the site went from 12 old cabins to 34 new cabins with outdoor swimming pools.

A rite of passage

The Kelly family does not own the lodge. It is a state park facility, operated by Illinois Department of Natural Resources. Ownership aside, it is the Kelly family business.

“Everybody in the family has worked at the lodge. They usually start hosting or bussing tables and graduate to the waiting tables. Mikey (Mike’s son) joined us a few years ago after college,” Mike Kelly said. “My brother-in-law Jim Booziotis joined us years ago. He certainly has a big part in the business.”

For members of the Kelly family, working at the Lodge is a rite of passage. Mikey Kelly started working helping set and clear tables on busy Sundays when he was in about third grade. Of course, that meant getting some money for working from his grandpa.

“That’s kind of the way it is. If you’re in the family, you work at the lodge,” Mikey Kelly said.

He said he couldn’t pass up the opportunity to work with family, his parents, grandparents and uncle.

“We all get along pretty darn well,” Mikey Kelly said.

On any Sunday, you will find Mike and Mikey Kelly and Jim Booziotis hard at work at the lodge. Kay Kelly is usually at the hostess stand and Richard is in his office, just off the dining room.

He makes the bills, he pays them

Richard Kelly still keeps a handwritten tally of each’s day’s business in a ledger book, just like his dad taught him to do at Kelly’s Big Star. The bookkeeping is computerized, but he takes the computer printout and adds the numbers to the book.

“I’ve carried my dad’s habit into the business at the lodge,” Richard Kelly said.

They are lined up on the bookshelf behind his desk, along with one of his dad’s ledger.

They joke that Mike Kelly makes the bills and Richard Kelly pays them.

Mike Kelly said that, in addition to family, they have been fortunate and blessed with a good staff, especially the past year and a half. They have gone through closures, indoor dining, outdoor dining, runs of exposure to COVID-19 and all the ups and downs that pandemic has brought.

“At one time, we had eight people quarantined (because of exposure). None had COVID, but they couldn’t work. Other employees filled in their spots,” Mike Kelly said.

The walls give visitors an idea of how popular that fried chicken is, too. There are pictures of Giant City State Park, celebrities who have visited, politicians and family, as well as newspaper and magazine articles celebrating Giant City Lodge.

“Forty-one years have flown by and now three generations of family operate the lodge,” Mike Kelly said. “We may be a little bit Mayberry, but it works.”

“I have been so blessed,” Richard Kelly said.

9 photos from the Giant City Lodge

An attorney filed the suit on behalf of three parents who have nine children enrolled in Triad Community Unit School District 2.

Praise the Lard kicks off in Murphysboro Friday

The Praise the Lard Murphysboro Cook-off is underway.

SIU Friends of Morris Library will gather on Thursday, Sept. 30 at Morris Library to honor two historical books. The presentation and award ceremony will be held in the library’s John C. Guyon Auditorium at 5 p.m.

Watch now: Black Friday remains a day for family to shop together

Watch now: Black Friday remains a day for family to shop together

What you should ask if retirement is just around the corner

What you should ask if retirement is just around the corner

The Bald Knob Dining Room at the Giant City Lodge was renovated and expanded in 1985 and is home to the famous all-you-can-eat family-style chicken dinner.

Three generations of the Kelley family Mike, from left, Richard and Mikey are involved in the management of the Giant City Lodge in Giant City State Park. The Kelleys have managed the lodge since 1981.

The Giant City Lodge was built in the 1930s by the Civilian Conservation Corps and has been managed by the Kelley family since 1981.