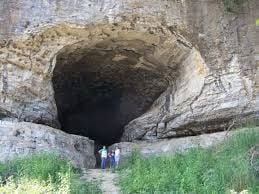 View of the cave from the River Bank 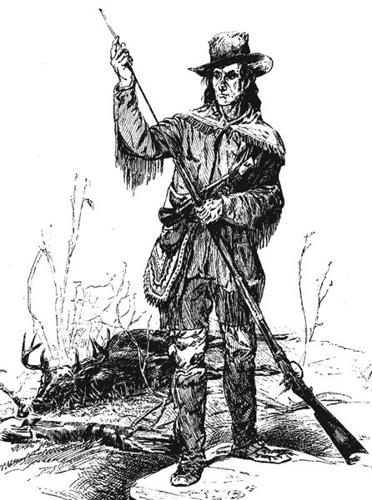 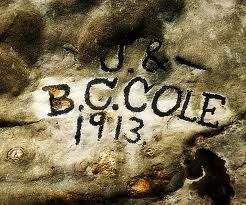 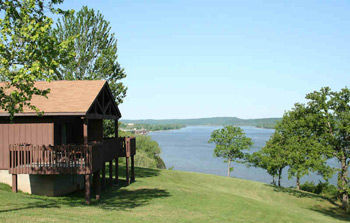 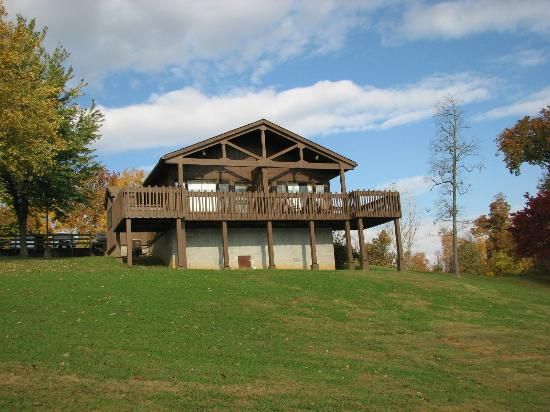 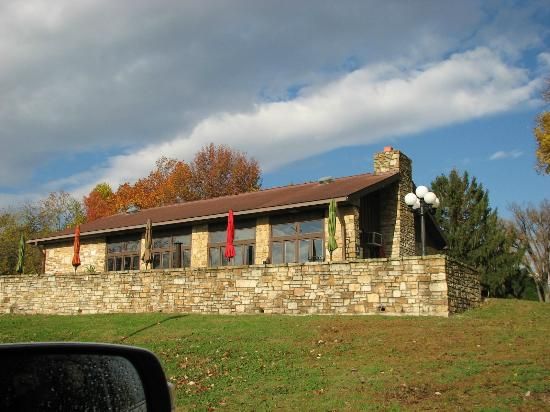 Hardin County, Illinois was formed in 1839, but the natural centerpiece of the whole county was first seen by European eyes a hundred years before. In 1739, the French explorer M. De Lery found and mapped the cave and gave it the name it still bears today. The cave had, of course, been in existence for thousands of years. It was worn into the bluffs by Ohio River flooding, probably extensively during the melting following the Wisconsin Ice Age. The effects of the 1811-1812 New Madrid Earthquake may have further contributed to the formation of the cave.

Many caves are the topics of stories told about the happenings in and around the premise. Possibly no cave, though, has more stories and legends told about it than this cave! Cave In Rock outlaws, pirates and counterfeiters reined for fifty years beginning in 1790. As is true with most legends, facts are few and sometimes even local folklore is hard to document in any credible way. However, legend holds that notorious counterfeiters Philip Alston and John Duff used the cave as a meeting place in the 1790s. Through a relationship with Duff, Samuel Mason moved his base of operations to Cave In Rock in 1797. Mason had been a Revolutionary War militia captain and later served as an associate judge in Pennsylvania, before moving his family to Kentucky. After arriving in Kentucky, Samuel Mason became the leader of a gang of river pirates and highwaymen outlaws who wreaked havoc around Cave In Rock, Stack Island (a point on the Mississippi River about 200 miles north of New Orleans) and along the Natchez Trace. Mason’s gang’s practice was to rob travelers going down the rivers. They also pirated boats carrying merchandise and supplies down the rivers. It was common practice for men to move supplies down the rivers, abandon the flatboats at the end of their journey, then return home along the Natchez Trace. If the Mason gang missed robbing them on one of the great rivers, they’d have yet another opportunity to rob them on land along the Natchez Trace.

Samuel Mason used Cave In Rock as a central point of his base of criminal operations which stretched all the way to New Orleans. His tavern in the cave created an easy lure for travelers to stop as they passed by, but the combination with gambling den, brothel and refuge for criminals made it the perfect trap.

There is some belief that the first recorded serial kills in American history might have spent time at Cave In Rock. Micajah and Wiley Harpe, known as “Big” and “Little” Harpe, were active during the last decade of the 18th Century. The Harpe brothers (who may actually have just been cousins) spread killing and despair wherever they went. While they operated primarily in Kentucky and Tennessee, there are some accounts of their horrible activities on the Illinois side of the Ohio River.

“Big” Harpe was the first of these three bandits to lose his head to captors, but eventually Samuel Mason and “Little” Harpe were captured, killed and beheaded. Their heads and skulls were left in strategic places in plain view to deter any future outlaws. Their departure only made way for the next generation of thieves and counterfeiters!

In the early 1800s, the Sturdivant Gang and the Ford’s Ferry Gang made appearances in the region. The Sturdivant Gang originated in Colonial Connecticut and by 1810, third generation counterfeiter Roswell S. Sturdivant lead his gang, which was primarily based in St. Clair County Illinois, but also occupied a fortress in nearby Pope County. The Ford’s Ferry Gang had a more local foundation. James Ford (1770-1833) was a business and community leader in Kentucky and Southern Illinois, in the areas on both sides of the Ohio River. The other side of his dual personality was that of a gang leader, and his bandits high-jacked flatboats for a couple decades!

Two of the most colorful characters in our story are perhaps Isaiah Potts and his wife Polly who owned a tavern near the Ford’s Ferry. Ferry goers would depart the boat then take the short trek to the tavern as they ventured inland. It was a common occurrence for the travelers to be attacked, robbed and killed along the route to the tavern. Although one descendent of Isaiah and Polly believe their behavior has been highly exaggerated over the years, there is one story that seems to live on. Did they murder their own son, when he returned after having been gone for years? While there is no credible evidence, legend holds that young Billy Potts left home after having been caught by locals while in the act of murder. Young Potts changed his ways and prospered. He returned home after many years, but his parents didn’t recognize their well-dressed son and lured him to the infamous spring for a drink, robbed and murdered him. They buried him, as they had often done, in a shallow nearby grave. The next day, friends of Billy Potts came looking for him and described having seen him the day he got off the ferry. Isaiah and Polly realized what they had done. They dug up his grave and found a young man bearing a birthmark just like their son had. If it is true; it is a sad ending.

Happily, outlaw folklore isn’t the only history associated with Cave In Rock! Although not too highly revered today as a highly educated researcher or author, in 1833 Josiah Priest wrote about cave paintings he observed at Cave In Rock. Priest described the paintings to include plants, animals, humans and the sun, moon and stars. He described the humans as wearing clothing similar to that worn by the early Greeks or Romans. He wrote, "On the Ohio, twenty miles below the mouth of the Wabash, is a cavern, in which are found many hieroglyphics, and representations of such delineations as would induce the belief that their authors were, indeed, comparatively refined and civilized."

In 1848, another writer visited the cave. William Pidgeon was a well-known antiquarian and archaeologist. He became famous for his 1858 work, Traditions of Dee-Coo-Dah and Antiquarian Research, although at a later time his work was critically deemed to be partly almost science fiction. He described the curious pictographs at Cave In Rock as humans that looked like ancient Egyptians. Pidgeon wrote about his belief because of artifacts he had found, that there was an entire network of a mound-builder race occupying sites in Wisconsin, Iowa, Illinois and Minnesota. At the time, many in the science community made fun of him. In the past 150 years, history and prehistory have unfolded themselves and we now know that the Ohio River Scenic Byway region was just such a place!

The pictographs described by Pidgeon and Priest have long been destroyed, but more recent graffiti tells the stories of other visitors to the cave. In 1913, the Ohio River flooded and B.C. Cole paddled his boat into the cave, stood up and carved his name into the ceiling of the cave. Who was B. C. Cole?

In 1929, Illinois bought the 64.5 acres of land that includes the cave. Additional parcels were purchased later and all combined form the current 200-acre Cave In Rock State Park. The beautiful park stretches from the Ohio River’s shoreline to the top of a 60 foot tall bluff. It is maintained by the Illinois Department of Natural Resources and the lodge and cabins are managed by Marty Kaylor, a Cave In Rock lifetime resident. Kaylor recently reported that IDNR reports that in 2012, 514,000 visited Cave In Rock State Park. Kaylor said number that showed a significant increase over the 2010 number of 227,000 people.

Cave In Rock State Park includes river access, camping, picnicking and beautiful hiking trails including the one that leads to the opening of the cave right on the banks of the Ohio River. Lodging is available at the park and the beautiful duplex cabin suites contain deluxe baths, a dining area with wet bar, a large bedroom and living room. Each has a private patio deck that overlooks the Ohio River. One of the cabins is handicapped accessible.

The restaurant in the lodge is popular for serving home style food and is open on Wednesday, Thursday and Friday evenings and on Saturday and Sunday. This summer, locally produced wines may be added to the menu.

Carterville-area restaurant under fire at county board meeting

Two arrested after death of 3-year-old girl from Carbondale

Isaac Hill, 45, and Katrina S. Simelton, 41, both of Carbondale were arrested Friday following an investigation into the death of a 3-year-old female.

As his time behind bars nears the three-year mark, R. Kelly is in store for another day of reckoning, one that could determine whether he will ever walk free again.

For Pavelonis, US Senior Open a bucket list item

When Carbondale’s Britt Pavelonis tees off at 1:25 p.m. Thursday in the first round of the U.S. Senior Open at Saucon Valley Country Club in B…

Incumbents seemed to rule the night for the primary election for Republican candidate for state representative in the new 117th and 118th Districts of the Illinois House.

"Darren is just the man to take on and defeat one of the worst governors in America, J.B. Pritzker," former President Donald Trump told a rally in Adams County.

PINCKNEYVILLE - When incumbent Perry County Sheriff Steve Bareis decided not to run for re-election, that opened the door for two other Republ…

AnnRae Hochheimer  stood alone at the corner of Illinois Avenue and Main Street in Carbondale with a sign that read “I will not submit.”

MARION — The Williamson County treasurer's race on the Republican ticket in next week's Illinois primary is a two-man race. It features a thre…

View of the cave from the River Bank