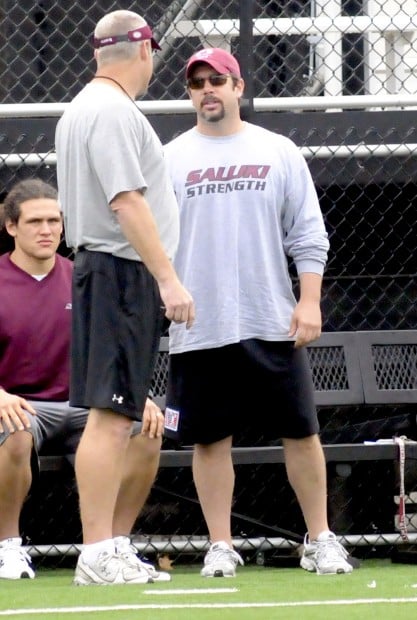 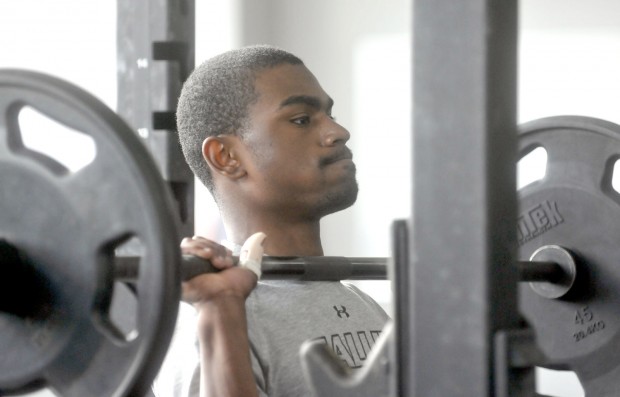 BY TODD HEFFERMAN, The Southern

CARBONDALE — Clete McLeod may not have worked a day since he became SIU’s new strength and conditioning coach last November, but he leaned back in his chair and laughed at the thought of being away from SIU Arena Tuesday.

“What do I do when I’m not here? I’ll let you know when I’m not here,” said McLeod, an SIU alum who has three degrees from the school. “Since I’ve gotten here I’ve taken, like, a day and a half off. I wasn’t here on Christmas Day. Other than that, I’ve been here, like, every day. Maybe I’d try and fish or something. I don’t know. That’s a great question. If I’m not here, there’s always a sporting event going on, so I’d probably go watch them.”

The “them” McLeod referred to are the 300-plus student-athletes at SIU that he’s now in charge of getting bigger, faster, stronger and more active in their particular programs. A former infantryman in the Army, he had the football team read the Marine Corps warfighting manual to learn about preparation and leadership. He rearranged the weight room to allow more space between machines and put a list near the water fountain of super foods for athletes to eat.

Being a former Saluki gives more credence to his methods, according to SIU football coach Dale Lennon.

“He’s an old school. He likes the simple, old-fashioned way of going about it, basically, hard work and not taking any shortcuts,” Lennon said. “He was here with coach (Eric) Klein, so he definitely knows the traditions of the program and where it’s come, and those are things, too, that the players appreciate, too, that he’s a Saluki.”

Outside linebacker Jayson DiManche appreciated how he could gain 13 pounds since last fall and not lose any speed.

“This is the heaviest I’ve ever been, and I don’t feel like I’ve slowed down. I’m up to 230 pounds now, and he’s just been doing an outstanding job,” DiManche said. “Great attitude. Great personality. Very intense guy. Holds everybody accountable, and even his assistants and other coaches. He gets after the mif they’re not doing what they’re supposed to do.”

Four years after leading the strength and conditioning program for the Oregon State football team, not to mention six other programs there, McLeod landed his dream job at the age of 37. He was in charge of baseball and softball’s programs at Northern Illinois in 2006, then went to Southeast Missouri State for a year before the Beavers called. When he was in grad school at SIU under Klein in 2001, the weight room was about 1,000 square feet. Today, with the addition of the Troutt-Wittmann Center, it’s about 3,000 square feet, is connected to a renovated SIU Arena, and looks out over a new football stadium that was completed in 2010.

“Everything I’ve done, every place I’ve gone, has always been to get back to here. This has always been my dream job,” McLeod said. “Being at a BCS school was loads of fun, but if you really love what you do, this is the place that you want to do it, and I feel in love with his place when it was garbage. And it’s beautiful. We have the most amazing facilities around. This is comparable to anything.

“Our weight room is not as big as at Oregon State, but in terms of equipment and what we’ve got, it’s as good as anything in any place.”

Clete McLeod began working hard at the age of 8, so it's not much of a surprise where is today.

Placekicker battle one of SIU’s best this spring

CARBONDALE — One of the best competitions of spring football lies not on the offensive line, which lost three starters, but well behind it.

CARBONDALE — Kory Faulkner spent more time in the offseason looking at his past performances, rather than trying to relive them.

Lincoln Drive, which loops around the SIU Carbondale campus, is expected to make a transformation through the next four years.