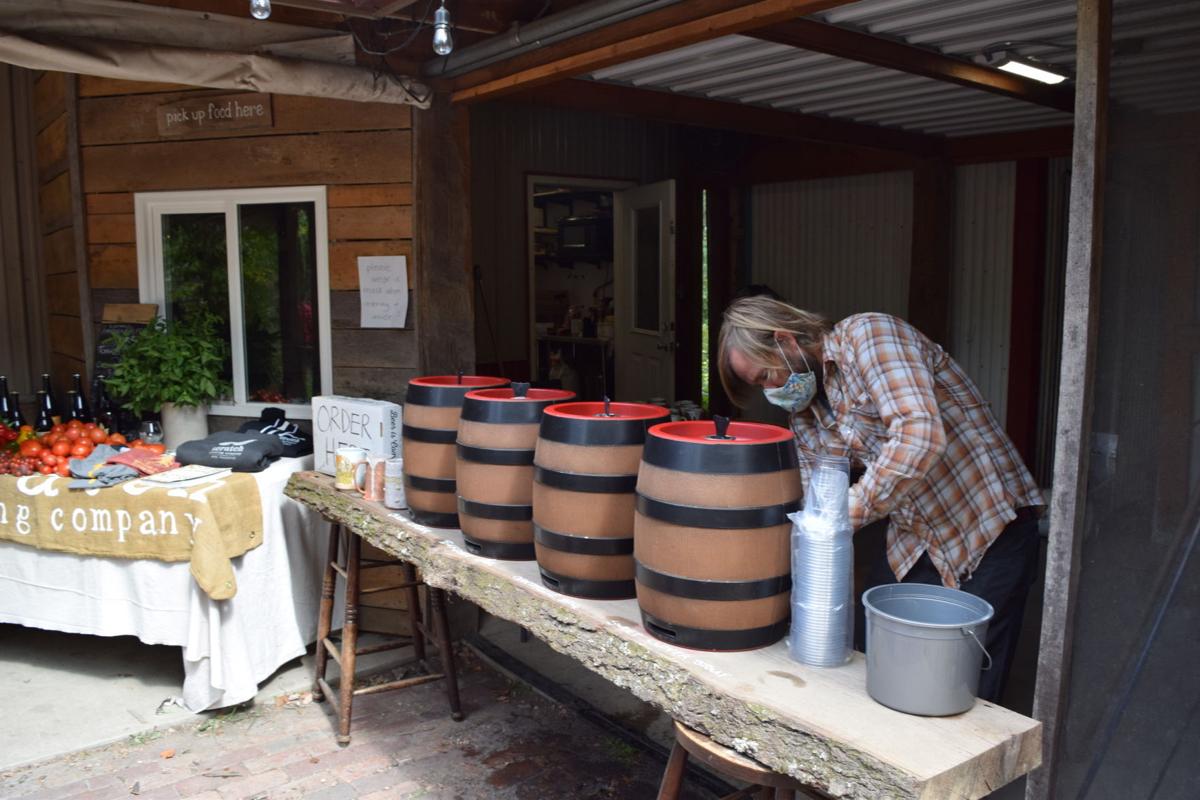 Scratching Brewing Co. co-owner Aaron Kleidon pours a draft beer of the four on sale during the first day of Scratch's 2020 Octoberfest celebration on Oct. 3 in Ava. 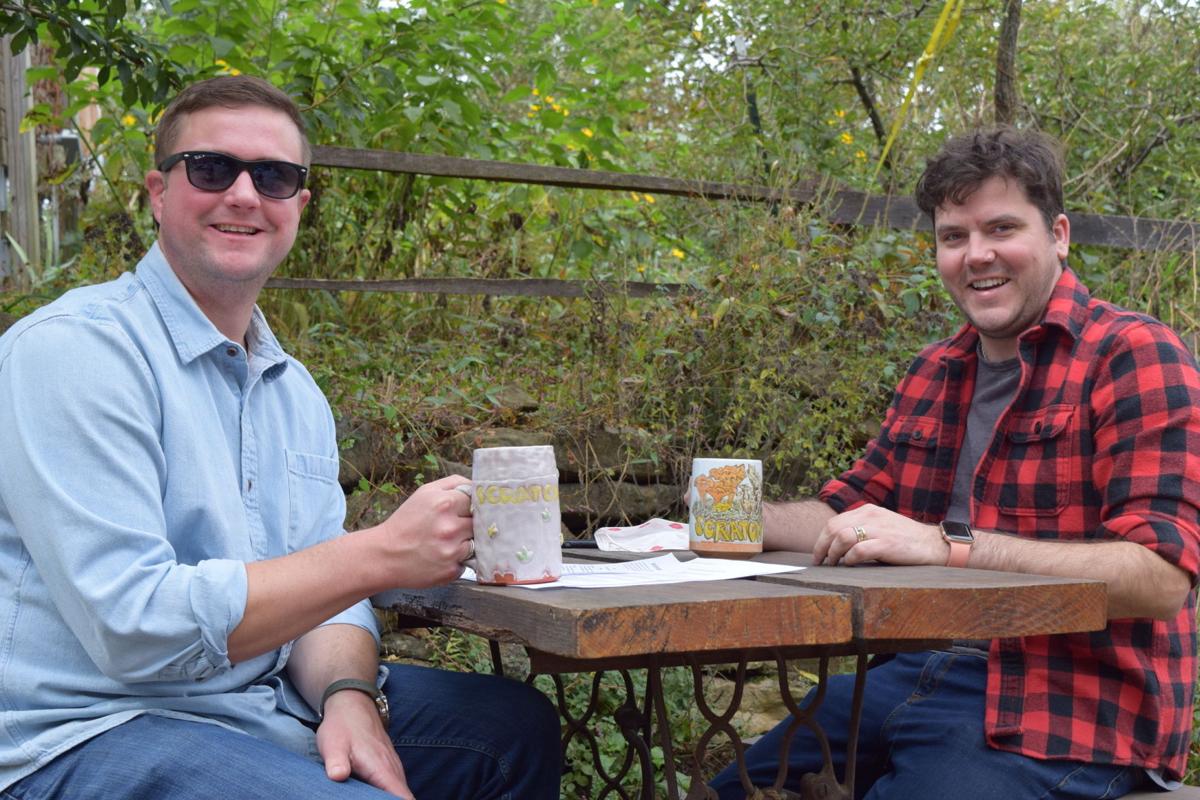 Joel Carter, left, and Robert Mullen enjoy one of the craft beers on the first day of Scratch Brewing's 2020 Oktoberfest celebration on Oct. 3 in Ava.

NELLIE BARIL For The Southern

Scratch Brewing Co.’s annual Oktoberfest celebration is in full swing at the Ava brewery, which has an ideal setting for outdoor fall festivities.

The event has changed a bit this year as the brewery is celebrating Oktoberfest every Saturday in the month of October rather than just over one weekend, as it had done in previous years. The event presents four specially brewed beers each Saturday in traditional German gravity casks. For this Saturday, Oct. 10, the brewers have not yet decided on all four varieties, but the Keller Bier, an unfiltered Franconian style lager, will be one of the cask selections as it features Munich malt, and is an Oktoberfest mainstay.

As in past years, Scratch Brewing will offer handmade steins from local artists for sale, too. Southern Illinois ceramicists Rob Lorenz and Stephanie Dukat have created unique styles for this year’s steins and offer something for lovers of simple design as well as fans of more ornate pieces of functional pottery. Scratch will take a dollar off the price of each beer purchased for patrons who purchase a stein or use a stein purchased in previous years. Although the Oktoberfest cask beers are only sold on Saturdays in October, the steins can be purchased during any normal business hours.

Along with the special cask beer featured during Oktoberfest, Scratch also has draft beers, such as the barrel-aged blueberry — popular with sour beer aficionados — and wet-hopped farmhouse ale — full of chinook and cascade hops, on tap — as well as cold bottles of beer to imbibe at the event or to take home and enjoy later.

Nonalcoholic beverages are also available, including a sweet and slightly spicy mint and herb soda in addition to hot coffee from Dark Matter Coffee. Fresh produce is on sale, including heirloom and cherry tomatoes and peppers.

Marika Josephson, co-owner of Scratch Brewing Co., said that Oktoberfest is a favorite event for the entire staff at Scratch given the beauty of Southern Illinois during the fall season and the unique outdoor patio space at the brewery.

“One big thing about the brewery, besides the beer, is the space here and the extensive patio and beer garden that we’ve created. We’ve always felt like that is as much a part of the personality of Scratch as the beers and we’ve always tried to make it a warm and welcoming place,” Josephson said.

With a cozy fire pit, numerous rustic wooden tables and benches, fresh air and sunshine, Oktoberfest is an ideal time to sample new brews and old favorites while appreciating the beauty of a Southern Illinois autumn.

Since purchasing the Peachbarn Winery from Anders and Gerd Hedman, the Schroeders haven’t changed too much of the legacy left behind by the original owners.

Scratching Brewing Co. co-owner Aaron Kleidon pours a draft beer of the four on sale during the first day of Scratch's 2020 Octoberfest celebration on Oct. 3 in Ava. 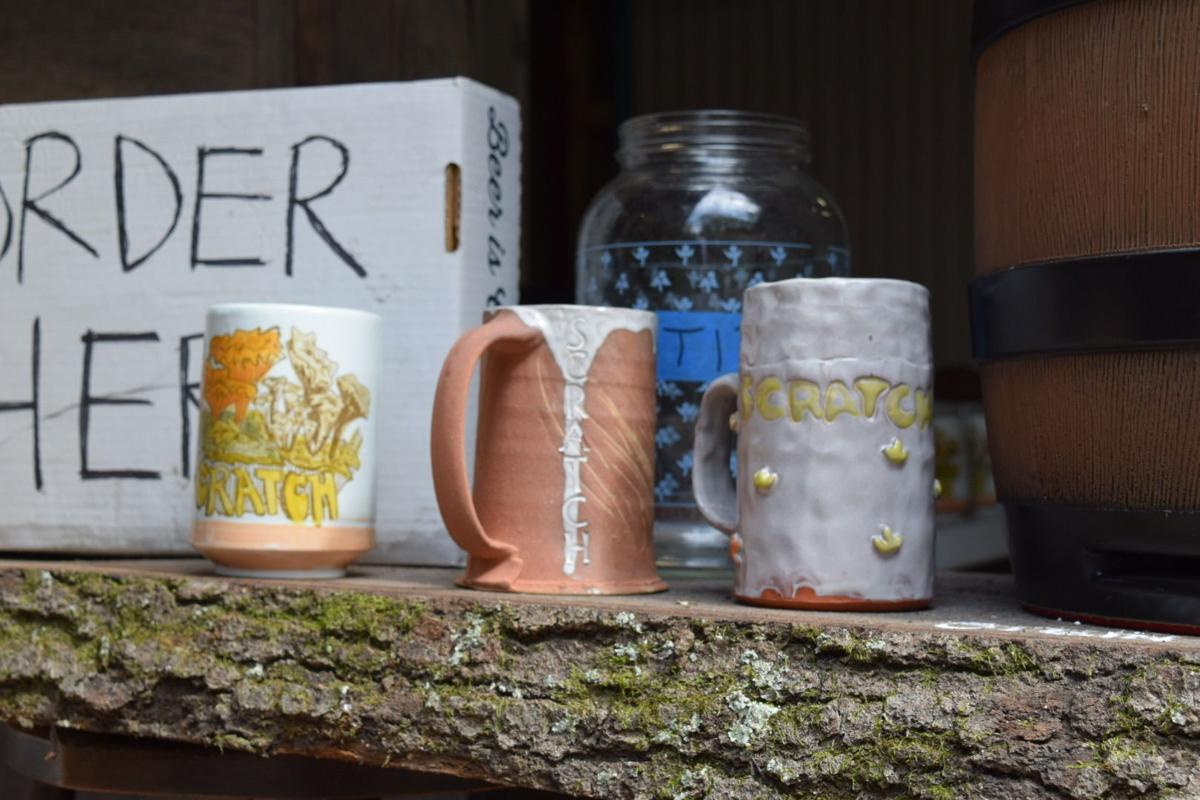 Handmade beer steins are for sale as part of Scratch's 2020 Oktoberfest.

Joel Carter, left, and Robert Mullen enjoy one of the craft beers on the first day of Scratch Brewing's 2020 Oktoberfest celebration on Oct. 3 in Ava.