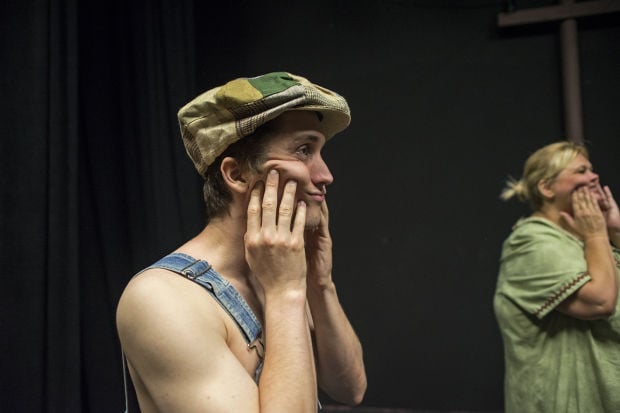 Josh McClernon loosens up his muscles Monday June 30, 2014 before beginning rehearsals for Mother Hick's at The Varsity Theater in Carbondale. 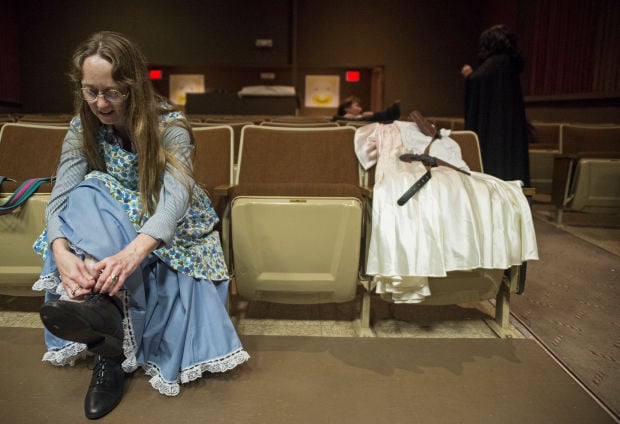 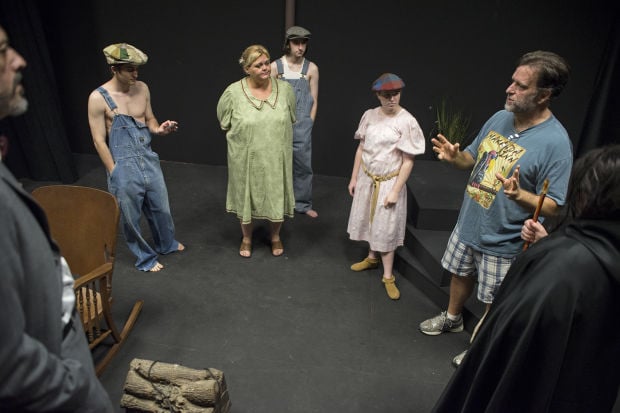 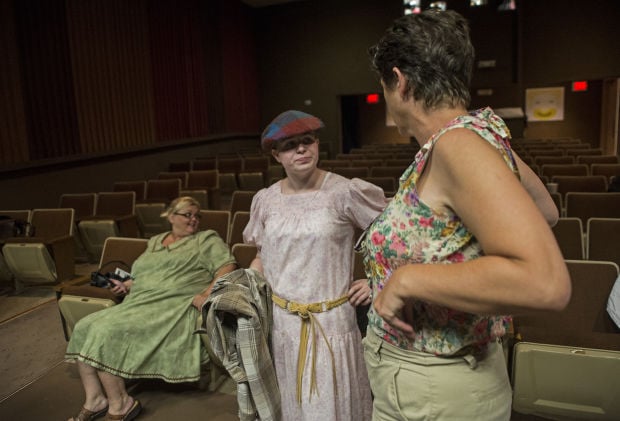 Virginia Parkinson, left, and Ruth Dougherty discuss wardrobe Monday June 30, 2014 during a rehearsal for Mother Hick's at The Varsity Theater in Carbondale. Parkinson plays the character "Girl" in the performance, which will start July 11-13 and July 18-20.

The small Union County community of Ware likely goes unnoticed by many, even those who have called Southern Illinois home for their entire lives. There are no major businesses, no interstates and not a lot of news headlines or a spot on the evening news.

But to playwright Suzan Zeder, the community’s past offered a gateway of discovery to be explored on the theater stage. Zerer, who recently retired from the University of Texas, drew inspiration for one of her noted plays, “Mother Hicks,” from Federal Writers Project interviews conducted in the area during the Great Depression.

The story is of three main characters: an orphan, identified only as Girl, who is seeking her mother and a home; Tuc, a deaf boy who leads the storytelling; and Mother Hicks herself, a reclusive woman many locals believe to be a witch.

“It’s a unique play in a lot of ways,” said Kevin Purcell, director of The Stage Co.’s upcoming production. “But probably the most unique thing about it is that the narrator is deaf.”

Tuc helps advance the story through use of sign language. Actors playing other members of the Ware community provide the verbal translation of his words, though they do so in the manner Tuc would speak himself, if he could.

To add to the realism and effect of the production, Purcell cast Sam Butler, a recent John A. Logan College graduate with real-life hearing problems, in the role of Tuc. Butler had never acted before, but with the help of Pam Walker from SIU’s American Sign Language program, he’s developed in his role and helped the other cast members do the same, Purcell said.

“Pam has really helped us work with Sam and taught us about sign language and the best ways to communicate,” he said. “It’s really been a gift in so many ways to have them involved.”

Purcell admitted he had reservations before casting about working with a hearing-impaired actor; but through the experience, he’s learned just how integral that element is to the play. The story itself deals heavily with how we perceive the unknown when dealing with people like the deaf Tuc and the introverted and isolated Mother Hicks.

Throughout the production, the audience will likely find themselves captivated by the signing efforts of Butler and Walker, who will participate in the live production, as well.

“You can’t help but learn by watching,” Purcell said. “It’s so elegant and passionate the way Sam communicates with hands and fingers.”

“Mother Hicks” is presented by The Stage Co. and The Southern Illinoisan and will come alive at the Varsity Center for the Arts at 7 p.m. Friday, July 11 and 18 and Saturday, July 12 and 19, as well as 2 p.m. Sunday, July 13 and 20. Tickets are $10 for general admission and $5 for students and can be purchased at the Varsity box office from 5-7 p.m. Monday to Saturday and one hour before each performance.

While the ties to Southern Illinois add to the allure of the production, Purcell said he’s excited to see it come to life in the region regardless of that connection.

“Even if it weren't set here, it would still be a beautiful, wonderful play,” he said.

What: Suzan Zeret play presented by The Stage Co.

Where: Varsity Center for the Arts, 418 S. Illinois Ave., Carbondale

Josh McClernon loosens up his muscles Monday June 30, 2014 before beginning rehearsals for Mother Hick's at The Varsity Theater in Carbondale.

Virginia Parkinson, left, and Ruth Dougherty discuss wardrobe Monday June 30, 2014 during a rehearsal for Mother Hick's at The Varsity Theater in Carbondale. Parkinson plays the character "Girl" in the performance, which will start July 11-13 and July 18-20.