Music Historicity | Musical genres, part 4: How did we get 'the blues'?
0 comments
Share this
{{featured_button_text}}

Have you got the blues?

Perhaps, if an artist or a house painter, you're wondering if there's enough azure, cerulean, aquamarine or turquoise.

Maybe you're a fan of a certain hockey team from St. Louis. No, I'm not asking about the St. Louis Blues. By the way, I happen to be a huge Chicago Blackhawks supporter  — go 'Hawks!

In this, the next installment of an ongoing examination of musical genres, I'm referring to blues music.

Certainly, "getting the blues" is a phrase that has permeated our cultural vernacular, alluding to more than simply the musical style. The term is commonly used when someone is feeling down in the dumps, which cannot be said of other music genres.

"I'm feeling rather orchestral," or "I woke this morning and felt positively operatic," or "Boy, I'm really goth this evening."

Those simply do not ring with the same effectiveness as when someone laments, "My car got dinged in the parking lot, and now I've got the blues."

But how did the blues come about, and how did the music genre evolve to where it is today?

In 1798, English dramatist George Colman authored "Blue Devils: A Farce, in One Act." The title refers to the initial feelings of a depressed and suicidal character in the play whose melancholy is equated to the "blue devils," or the sadness attributed to African Americans living difficult lives in the Deep South of the U.S.

From there, the shortened term "blues" was applied to anything sad or depressing, including music.

Upheld by many courts, "blue laws" were those placed on the restriction of alcohol sale on Sunday. Similar blue law prohibitions of work and labor on Sundays date back to a dictum by the Roman emperor Constantine, in 321 A.D.

While blues music originated in the U.S., early history of the genre is not well documented, due to slavery, literacy and racial discrimination.

Various forms of African American chanting, such as "field hollers," were reported as early as 1853. Noting that 30% of African slaves in the U.S. were Muslims, an author noted that some work chants harkened to the Islamic call to prayer, which began in the 7th Century A.D.

At the turn of the 20th Century, musician and composer William Christopher ("W.C.") Handy came to prominence as the first person to publish sheet music in the blues genre. Referring to himself as the "Father of the Blues," Handy is famous for his "Memphis Blues," written in 1909, the "Saint Louis Blues" (1914) and "Beale Street Blues" (1916).

By the 1960s, significant blues artists had emerged, including Muddy Waters, Willie Dixon, John Lee Hooker and B.B. King, to name a few.

The influence of blues music in Europe became significant. Blues rock songs were performed by bands such as the Yardbirds, which featured legendary guitarists Eric Clapton, Jimmy Page and Jeff Beck.

A blues influence could be heard in the music of British groups such as the Rolling Stones, Led Zeppelin, The Who, Ten Years After, The Animals and John Mayall & the Bluesbreakers.

Back in the U.S., an evolving blues scene saw the emergence of the Texas blues rock style, exemplified by the Fabulous Thunderbirds, with guitarist Jimmy Vaughan. His brother, Stevie Ray Vaughan, was an innovative performer in the Texas style until his tragic 1990 death in a helicopter crash.

You may not have heard of them, but Shemekia Copeland won the award for blues Entertainer of the Year. Christone "Kingfish" Ingram won both Contemporary Blues Male Artist and Guitar Instrumentalist. Guitarist Elvin Bishop and harmonica player Charlie Musselwhite, both well into their 70s, won Album of the Year and Traditional Blues Album.

Whether you "got the blues" from listening to a blues music album, from your dog tracking muddy paw prints into the house or from watching the 1979 John Landis film "The Blues Brothers," remember that it's a style born in the U.S. and is here to stay.

Kim Kardashian is in a legal tussle over new brand name

May started on a positive note for local band U-Foria as they played a show at Shotgun Eddy’s in Eddyville to celebrate the grand opening of a new outdoor pavilion at the popular eatery in rural Pope County.

Scarlett Johansson is suing Walt Disney Co. over its streaming release of "Black Widow," saying it breached her contract and deprived her of potential earnings.

TOKYO (AP) — At an Olympics aiming to set the highest level of television standards, the head of broadcasting at the Tokyo Games is trying to banish overly sexualized images of female athletes.

ZZ Top bassist Dusty Hill dies in his sleep at 72

ZZ Top bassist Dusty Hill, one of the Texas blues rock trio's bearded figures, died at his Houston home, the band announced Wednesday. He was 72.

Ron Popeil, inventor and king of TV pitchmen, dies at 86 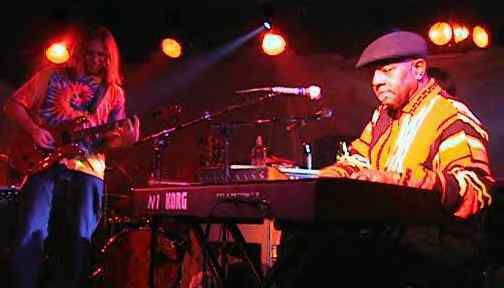