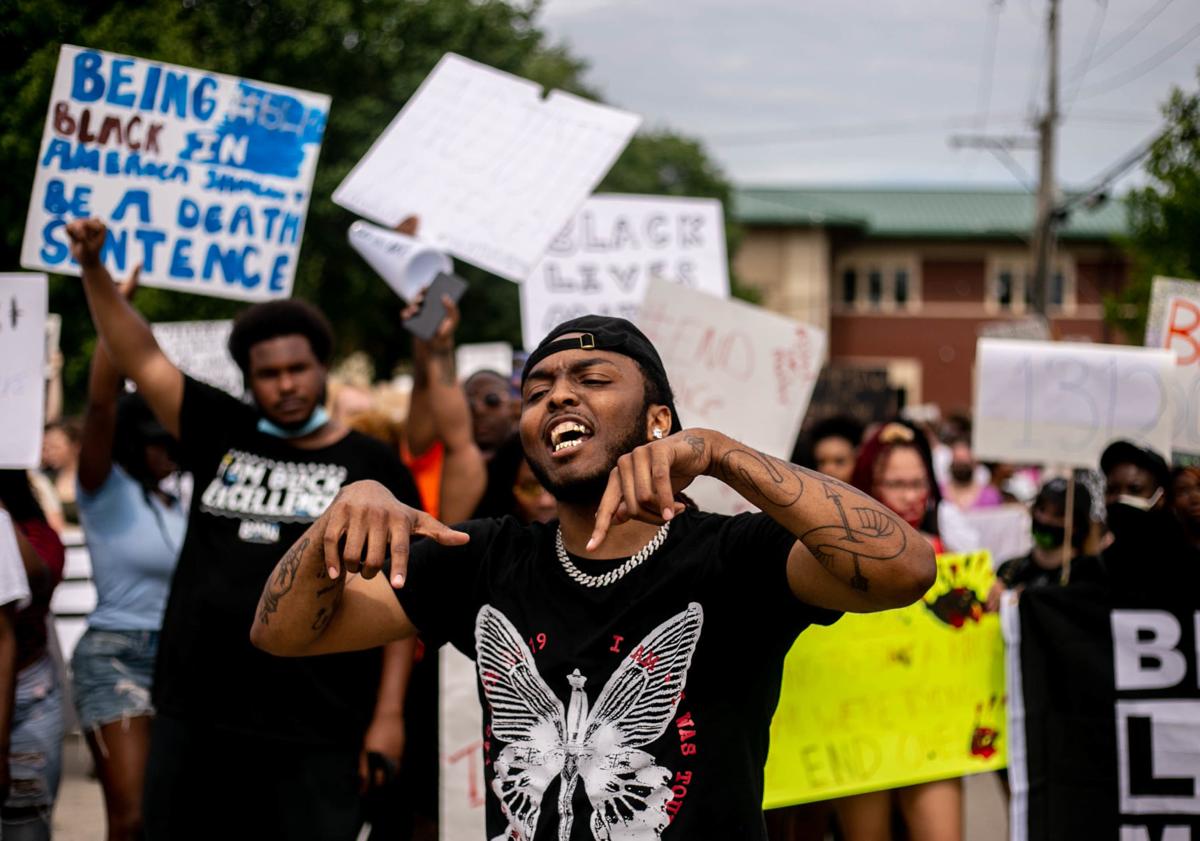 Courtlin Jabrae filmed his most recent music video during the Justice for George Floyd rally and march this past Friday in Carbondale. 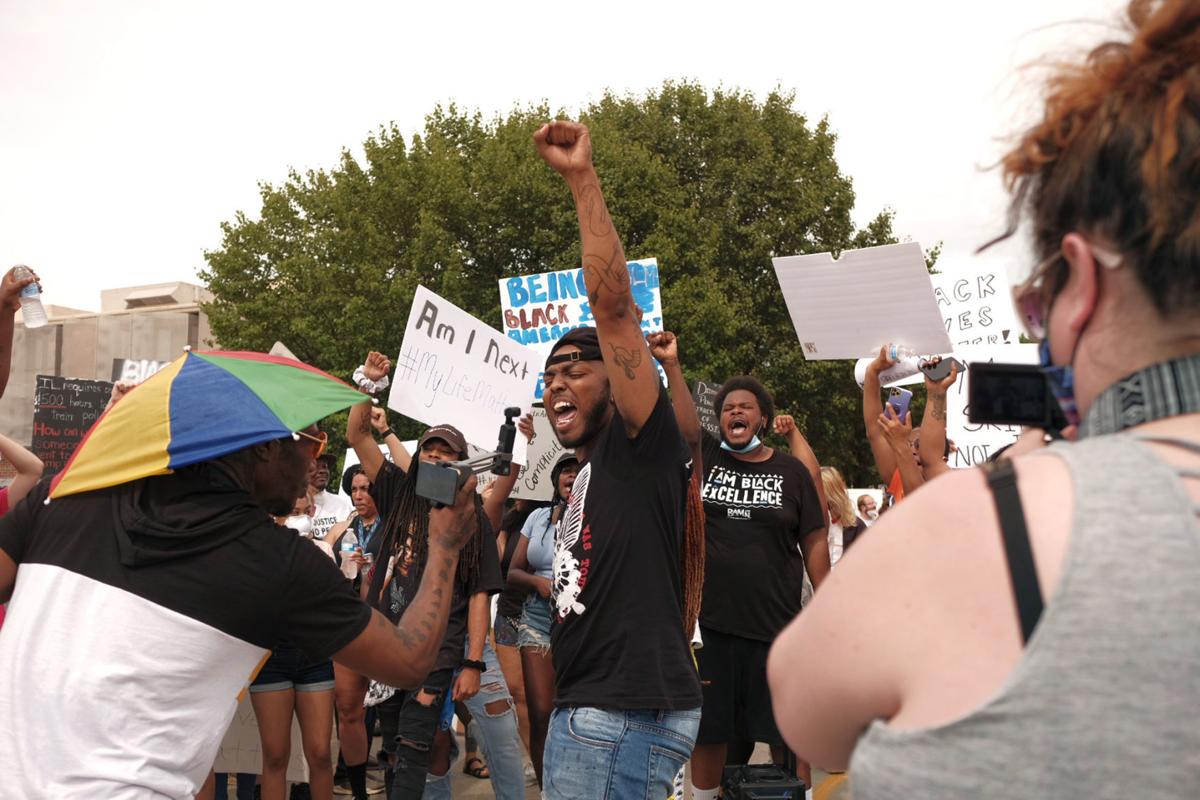 Musician Courtlin Jabrae sings an original song during a march against police brutality Friday in Carbondale.

CARBONDALE — Courtlin Jabrae is having a moment.

Jabrae has spent a lot of time reflecting on the world he lives in and his role in it, both as a person and as an artist.

Jabrae, who has been making music since he went to Carbondale Community High School more than a decade ago, has enjoyed success throughout his career. He has received attention from BET as well as Vibe Magazine for his work.

Hundreds march in Carbondale to 'demand justice for all black lives'

This was the second demonstration in Carbondale since Floyd’s death and saw nearly 800 people gather at the Civic Center, and then march to the city’s police department.

“It’s not just about me when I write lyrics,” Jabrae told The Southern in an interview Tuesday, a day after he released his remix of Kendrick Lamar’s “Alright,” which became a protest anthem in the wake of Michael Brown’s 2014 death in Ferguson, Missouri. Brown, an unarmed black man, was shot and killed by a white police officer, which led to months of protests against police brutality, especially against African Americans.

Jabrae's remix comes in the wake of the death of George Floyd, who was black, on Memorial Day in Minneapolis police custody. Floyd died after a white officer knelt on Floyd's neck for nearly nine minutes while he was prone and handcuffed. Floyd's death has spawned protests around the world and in several Southern Illinois towns, including Carbondale, Anna, Benton and Carterville.

In his take on Lamar’s song, Jabrae repeats the refrain: “It’s hard being black, but I love being black.”

Jabrae has been releasing new songs and videos every week as part of his Jabrae Monday series. He described them as weekly check-ins with what’s been on his mind. Recently, that has been the trauma shaking the black community.

Jabrae said he didn’t see anyone making the kinds of comments that he thought the moment needed, so he decided to speak up through song.

In wake of Floyd death, rural, white Southern Illinois towns are reckoning with racist past

What seems to distinguish this moment’s push for racial justice in Southern Illinois is the number of gatherings that are taking place beyond the borders of Carbondale, a liberal-leaning university town.

“It’s not about me no more in my music,” Jabrae said. Instead, he said, he’s switched the focus to being “about us.” He said this doesn’t mean he’s gone full conscious rapper, though — there’s still plenty of time to talk about beautiful women and parties — but he said he’s not afraid anymore to talk about the issues his community faces, and most recently, that is police brutality and the trend of unarmed black men being killed at the hands of white police officers.

Part of the video for Jabrae’s take on “Alright” was filmed during a protest this past Friday in Carbondale. While waiting for a train to cross, Jabrae took the moment to blast his new track and film himself and the crowd moving to the song. He said few had even heard it, but it didn’t take long for them to start singing along. Jabrae said this was deeply moving for him.

“I felt one with everybody,” he said.

This was preceded the week before by Jabrae’s take on the Eminem single “Stan.” But, instead of the narrative following a fan writing to his favorite rapper, it’s Jabrae writing letters to the police.

In the video, the perspective shifts from Jabrae writing from a basement to him on the ground with a knee on his neck, mimicking the video of Floyd's final moments, in which he can be heard saying "I can't breathe" as the officer holds his knee to Floyd's neck.

“Is the chief getting this? Is anybody seeing this? Does the mayor even read this s---,” Jabrae says in his opening verse. He quickly redirects his message to falling into the role society has told him to be in.

“Scratch that. Don’t want to seem like that angry black man.”

Jabrae said words and marches are only one part of the equation — there needs to be action behind them. For him, that means doing more for his city.

“I need to get more involved in my community,” Jabrae said. “Let’s do more for Carbondale.”

When asked what moving forward looks like to him, Jabrae offered some clear ideas. He said he would like to be able to breathe a sigh of relief when a cop car pulls up to a challenging situation.

“I’ve never ever in my life felt like that,” he said before adding that when police officers get involved, things usually don’t get better, they get worse.

“Treat people like you would treat your mother,” Jabrae said.

Demonstrators gather in Carbondale to demand justice for Breonna Taylor

CARBONDALE — More than 100 days after a sleeping Breonna Taylor was killed by police in her home after they executed a no-knock warrant, South…

Speaking with the Paul Simon Public Policy Institute Thursday, Elizabeth Hinton sought to bring context and better perspective to the cycle of rebellion and state violence America finds itself in.

Courtlin Jabrae filmed his most recent music video during the Justice for George Floyd rally and march this past Friday in Carbondale.

Musician Courtlin Jabrae sings an original song during a march against police brutality Friday in Carbondale.