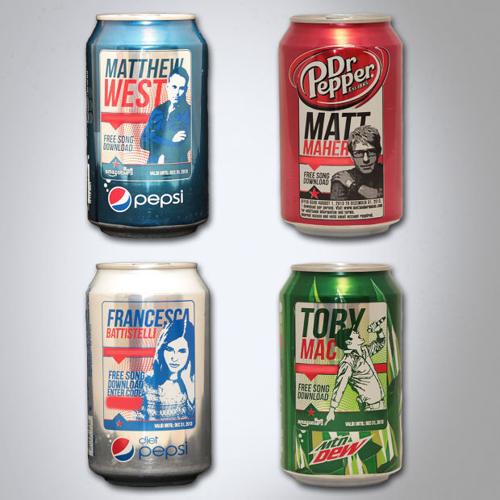 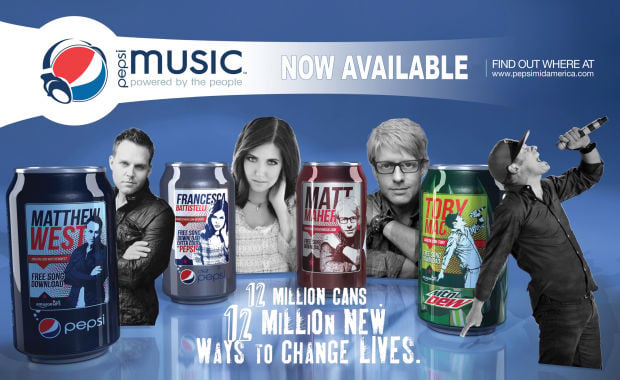 BY LES O’DELL FOR THE SOUTHERN

Many Midwestern consumers reaching for a cold drink in recent months also have gotten an introduction to Christian music and its message thanks to a special series of soda cans promoting popular music artists.

Marion-based Pepsi Mid America produced more than 12 million special edition cans of Pepsi, Diet Pepsi, Mountain Dew and Dr. Pepper, each featuring one of four Contemporary Christian Music artists in recent months. The cans, which were distributed in Arkansas, Illinois, Kentucky, Missouri and Tennessee, also gave consumers an opportunity to download a free song by the artist pictured. Christian radio broadcaster K-Love which provides programming to more than 700 on-air stations under then K-Love and Air1 brands, partnered with Pepsi MidAmerica on the promotion. The special cans were first introduced at K-Love’s Fan Awards in June.

“This started through a relationship we had with Lee Crisp of Pepsi MidAmerica,” K-Love president and CEO Mike Novak told The Southern. “This has been something very natural for us and it has really gained momentum.”

Pepsi MidAmerica Director of Marketing Doug Deaton said the tie-in with Christian music was very different than most marketing campaigns from Pepsi.

“We were seeing a lot of messages from PepsiCo on the national level that we didn’t feel were necessarily right for our customers in the Midwest,” he said. “We thought we’d do something that fit the values of our customers. That’s how the Artist Can Panel series came to be.”

Deaton said Pepsi MidAmerica had to get approval from the national brand to do the specialized cans.

“It is so surreal to see my face on a Pepsi can. I am beyond excited to see God reach many lives through these cans and the songs each artist is giving away. It’s a fantastic honor,” Battistelli said in a prepared release.

Novak said the broadcaster was delighted to be involved in the project.

“When they came to us and asked about this, we responded by asking how quickly could we get started,” he recalled. “One of the things we try to do is put ministry in the hands of people. This is taking the ministry and weaving it into the everyday fabric of America.”

In a press release, Pepsi MidAmerica President Lee Crisp said the promotion has served several purposes. “Pepsi MidAmerica is honored to partner with K-LOVE to present the Christian Artist Can Panel series featuring some of Christian music’s finest artists. These Pepsi cans were originally intended to quench thirst but now we realize they’re able to quench a deeper thirst … a thirst of the soul.”

Deaton said reaction to the can series has exceeded expectations.

“The response has been overwhelming,” he said. “In one instance, a customer called in after opening a 12-pack and told us how refreshing it was to see something positive out in the market. For us it’s about the music and the artists; plus, there’s a meaning to it. We’re proud of this program.”

“We’ve heard from two sets of people,” he said. “Some who already listen to Christian music and say, ‘this is really cool,’ and others who have found us for the first time from the cans. They have discovered us and Contemporary Christian Music.

That was our goal: that people get exposed to the music and the message.”

While the number of downloads stemming from the can series is yet to be determined, Novak said that initial reports have shown strong interest.

“They are doing better than the record labels expected,” he said, adding that a new series of can featuring different artists will be announced later in the year.

Novak said that the coming will continue programs such as the Artist Can Panel series.

“We’re going to produce programs that meet our consumers where they are in terms of culture and faith,” he said. “It’s our pleasure to share something that is family-friendly and positive.”

Top 10 'most read' stories this week

'Most read' stories on thesouthern.com during the week of January 5, 2014.

There needs to be a Geneva Convention or a special United Nations hearing on Christmas. Or a worldwide gathering where all of the people in ch…

O'Dell: Is it a gift wrap or a gift wreck?

I might as well be wearing oven mitts on my hands. And a blindfold. You’d never be able to notice the difference whenever I wrap presents. I b…

O'Dell: Holiday togetherness doesn’t mean we are all in agreement

These are divisive times we live in. Arguments abound, and everyone believes they are right about the issue in question. No, I’m not talking a…

Ah, the season of traditions. For many families, this holiday season is one of time-tested rituals and foods, passed down from generation to g…

As technology changes many church services, the message stays the same

Walking into The Christian Life Center in Herrin is a multi-sensory experience filled with high-quality lights and sound. It’s not designed to…

The right way to transport a Christmas Tree on your car

Study: The effectiveness of the COVID-19 vaccine can increase with added exercise

Study: The effectiveness of the COVID-19 vaccine can increase with added exercise