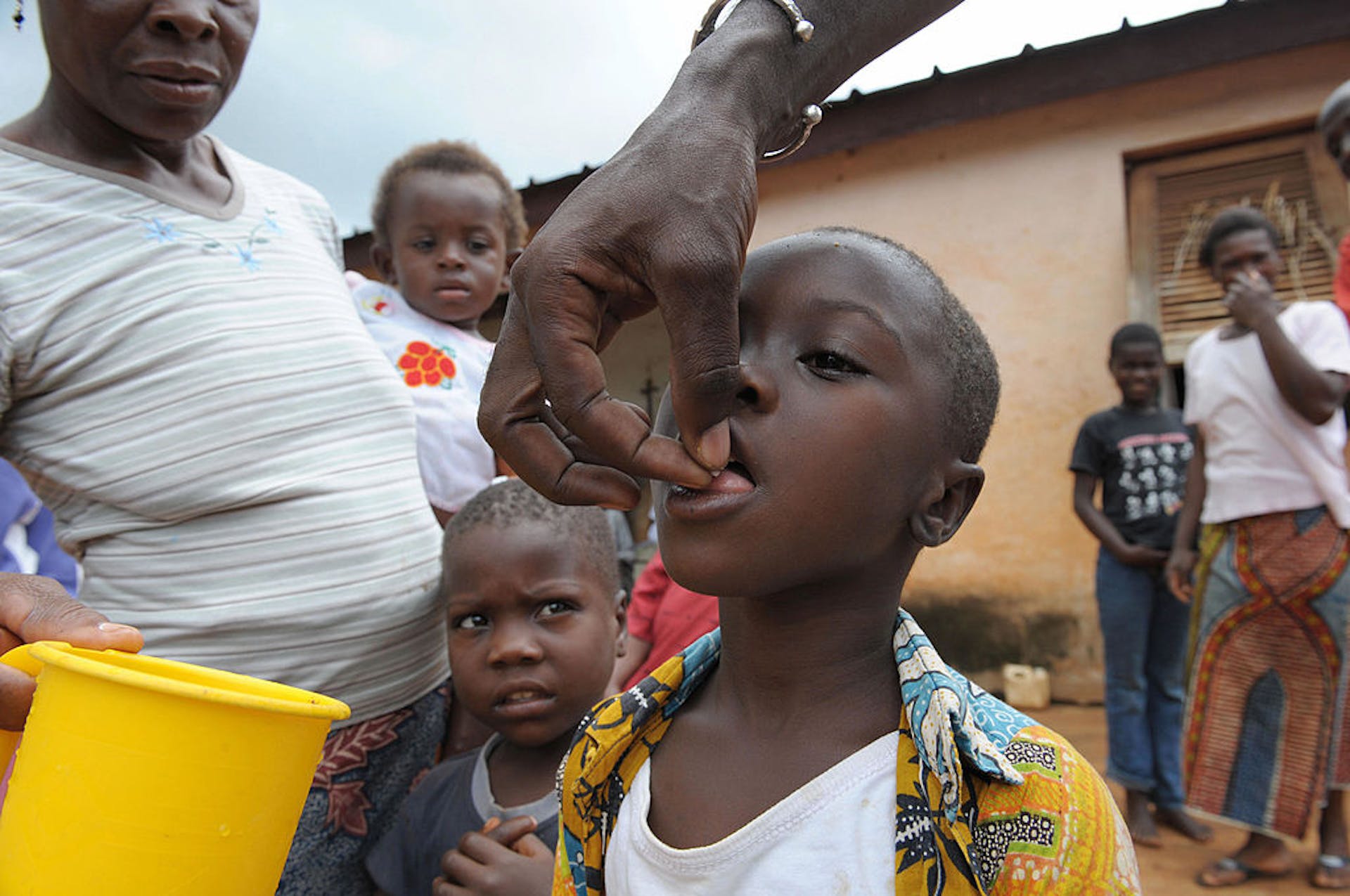 While ivermectin was originally used to treat river blindness, it has also been repurposed to treat other human parasitic infections. ISSOUF SANOGO/AFP via Getty Images Jeffrey R. Aeschlimann, University of Connecticut

Ivermectin is an over 30-year-old wonder drug that treats life- and sight-threatening parasitic infections. Its lasting influence on global health has been so profound that two of the key researchers in its discovery and development won the Nobel Prize in 2015.

I’ve been an infectious disease pharmacist for over 25 years. I’ve also managed patients who delayed proper treatment for their severe COVID-19 infections because they thought ivermectin could cure them.

Although ivermectin has been a game-changer for people with certain infectious diseases, it isn’t going to save patients from COVID-19 infection. In fact, it could cost them their lives.

Let me tell you a short story about the history of ivermectin.

Developing ivermectin for animal use

Ivermectin was first identified in the 1970s during a veterinary drug screening project at Merck Pharmaceuticals. Researchers focused on discovering chemicals that could potentially treat parasitic infections in animals. Common parasites include nematodes, such as flatworms and roundworms, and arthropods, such as fleas and lice. All of these infectious organisms are quite different from viruses.

Merck partnered with the Kitasato Institute, a medical research facility in Japan. Satoshi Omura and his team isolated a group of chemicals called avermectin from bacteria found in a single soil sample near a Japanese golf course. To my knowledge, avermectin has yet to be found in any other soil sample in the world.

Research on avermectin continued for approximately five years. Soon, Merck and the Kitasato Institute developed a less toxic form they named ivermectin. It was approved in 1981 for commercial use in veterinary medicine for parasitic infections in livestock and domestic pets with the brand name Mectizan. 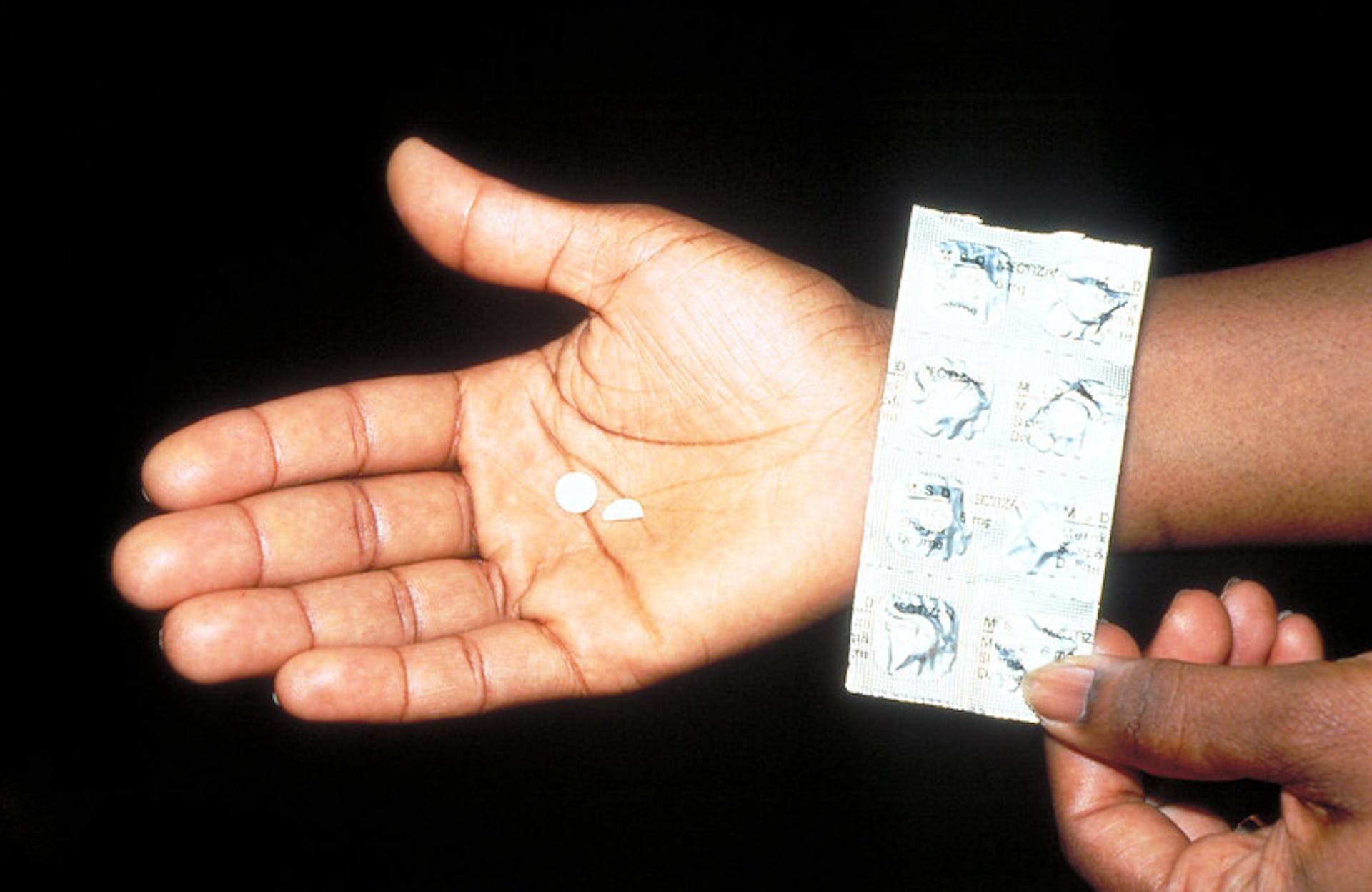 The chemical compounds that make up ivermectin were first discovered in bacteria found in the soil of a Japanese golf course. Pak Sang Lee/flickr, CC BY-NC

Developing ivermectin for human use

Early experiments by William Campbell and his team from Merck discovered that the drug also worked against a human parasite that causes an infection called river blindness.

River blindness, also known as onchocerciasis, is the second leading cause of preventable blindness in the world. It is transmitted to humans from blackflies carrying the parasitic worm Onchocerca volvulus and occurs predominantly in Africa.

Ivermectin underwent trials to treat river blindness in 1982 and was approved in 1987. It has since been distributed free of charge through the Mectizan Donation Program to dozens of countries. Thanks to ivermectin, river blindness has been essentially eliminated in 11 Latin American countries, preventing approximately 600,000 cases of blindness.

These two decades of extensive work to discover, develop and distribute ivermectin helped to significantly reduce human suffering from river blindness. It’s these efforts that were recognized by the 2015 Nobel Prize in Physiology or Medicine, awarded to both William Campbell and Satoshi Omura for their leadership on this groundbreaking research. 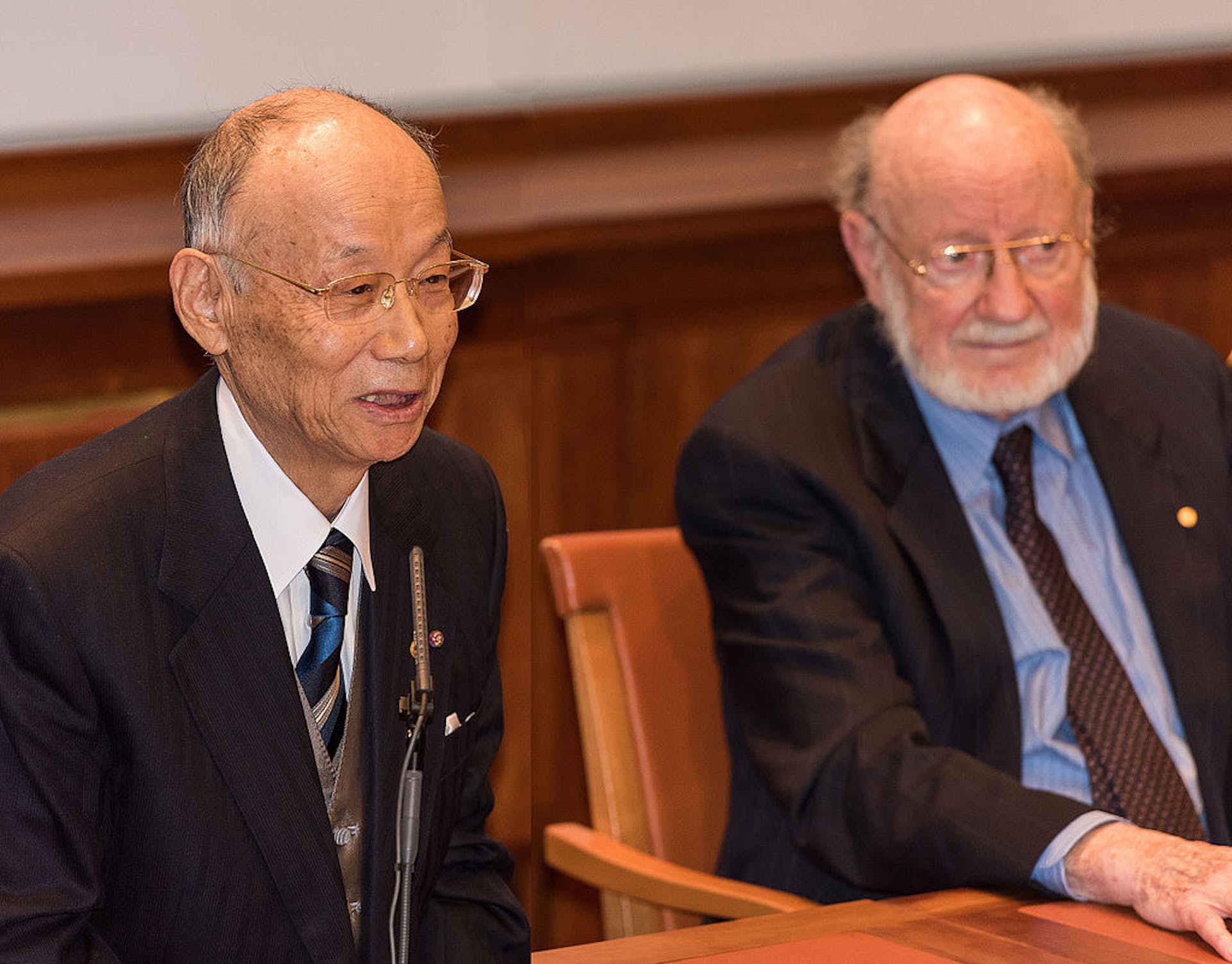 Satoshi Omura and William Campbell were awarded the 2015 Nobel Prize in Physiology or Medicine for their research on ivermectin. Bengt Nyman/Wikimedia Commons

Repurposing drugs for other uses

Infectious disease researchers frequently attempt to repurpose antimicrobials and other medications to treat infections. Drug repurposing is attractive because the approval process can happen more quickly and at a lower cost since nearly all of the basic research has already been completed.

In the years since it was approved to treat river blindness, ivermectin was also shown to be highly effective against other parasitic infections. This includes strongyloidiasis, an intestinal roundworm infection that affects an estimated 30 to 100 million people worldwide.

Another example is amphotericin B, originally approved to treat human yeast and mold infections. Researchers discovered it can also be an effective treatment for severe forms of leishmaniasis, a parasitic infection prevalent in tropical and subtropical countries.

Likewise, doxycycline is an antibiotic used for a wide variety of human bacterial infections such as pneumonia and Lyme disease. It was later found to also be highly effective in preventing and treating malaria. 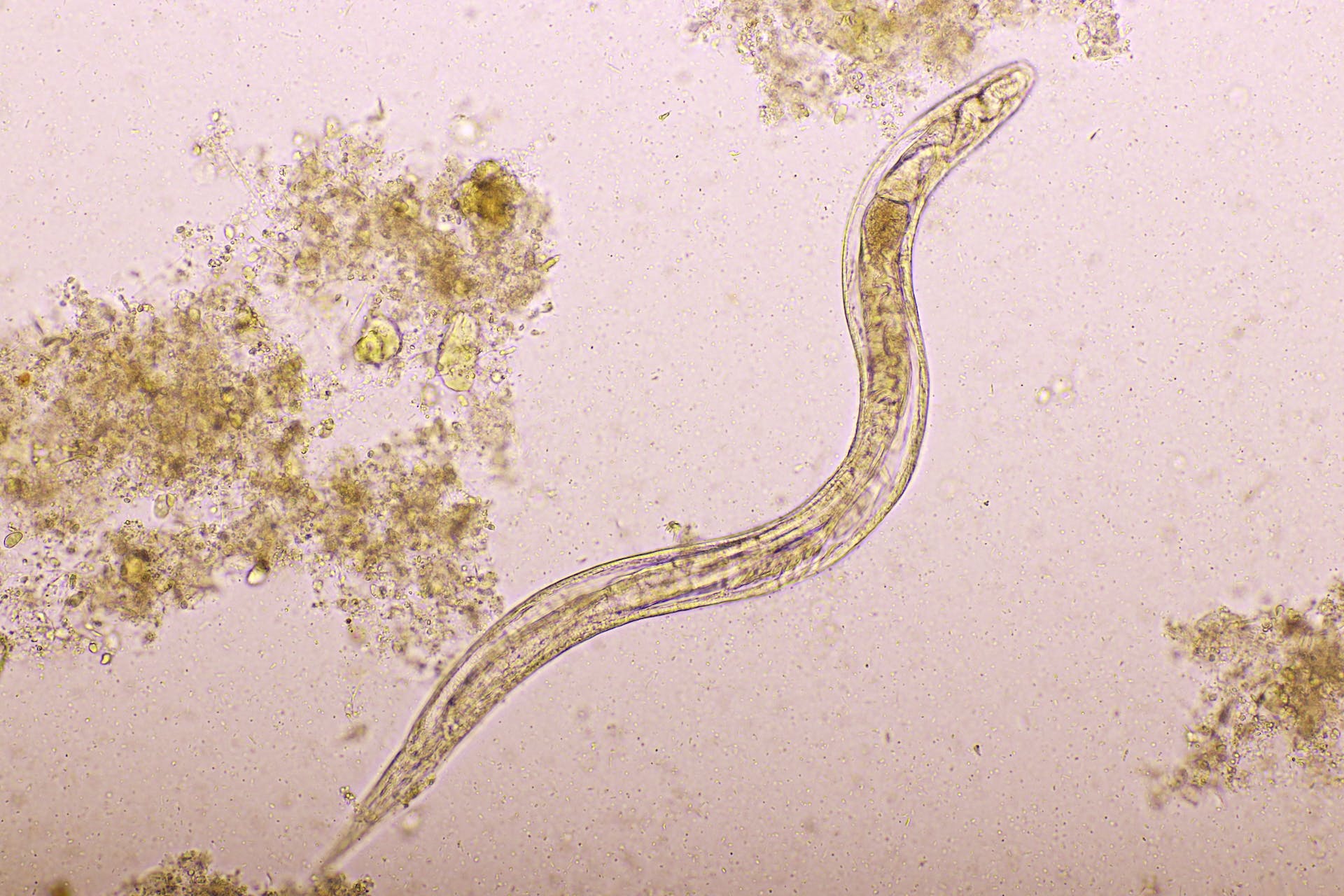 Ivermectin has been used to treat strongyloidiasis, an intestinal infection that can be life-threatening for the immunocompromised. jarun011/iStock via Getty Images Plus

Not every attempt at repurposing a drug works as hoped, however.

At the start of the pandemic, scientists and doctors tried to find inexpensive medications to repurpose for the treatment and prevention of COVID-19. Chloroquine and hydroxychloroquine were two of those drugs. They were chosen because of possible antiviral effects documented in laboratory studies and limited anecdotal case reports from the first COVID-19 outbreaks in China. However, large clinical studies of these drugs to treat COVID-19 did not translate to any meaningful benefits. This was partly due to the serious toxic effects patients experienced before the drugs reached a high enough dose to inhibit or kill the virus.

Unfortunately, lessons from these failed attempts have not been applied to ivermectin. The false hope around using ivermectin to treat COVID-19 originated from an April 2020 laboratory study in Australia. Although the results from this study were widely circulated, I immediately had serious doubts. The concentration of ivermectin they tested was 20 to 2,000 times higher than the standard dosages used to treat human parasitic infections. Indeed, many other pharmaceutical experts confirmed my initial concerns within a month of the paper’s publication. Such high concentrations of the drug could be significantly toxic.

Another commonly cited paper on ivermectin’s purported effects against COVID-19 was withdrawn in July 2021 after scientists found serious flaws with the study. These flaws ranged from incorrect statistical analyses to discrepancies between collected data and published results to duplicated patient records and the inclusion of study subjects who died before even entering the study. Even more concerning, at least two other oft-cited studies have raised significant concerns about scientific fraud.

At the time of this writing, two large randomized clinical trials both showed no significant benefit from the use of ivermectin for COVID-19. Reputable national and international health care organizations, including the World Health Organization, the Centers for Disease Control and Prevention, the National Institutes of Health, the Food and Drug Administration and the Infectious Diseases Society of America, unanimously recommend against the use of ivermectin to prevent or treat COVID-19 unless in the context of a clinical trial.

Consequences of using ivermectin for COVID-19

Unfortunately, many organizations with dubious intentions have continued to promote unsubstantiated use of invermectin for COVID-19. This has led to a dramatic rise in ivermectin prescriptions and a flood of calls to U.S. poison control centers for ivermectin overdoses. Many calls were due to ingestion of large amounts of veterinary products containing ivermectin – two deaths linked to ivermectin overdose were reported in September 2021.

Ivermectin, when used correctly, has prevented millions of potentially fatal and debilitating infectious diseases. It’s meant to be prescribed only to treat infections caused by parasites. It’s not meant to be prescribed by parasites looking to extract money from desperate people during a pandemic. It’s my sincere hope that this unfortunate and tragic chapter in the otherwise incredible story of a lifesaving medication will come to a quick end.

This article is republished from The Conversation under a Creative Commons license. Read the original article.

Here's who is eligible for Pfizer booster shots in the US. An explainer.

Who should get the Pfizer booster?

Who else can consider getting it?

What are the side effects?

Weren't some people already eligible for a third dose?

What if I got Moderna? Can I get a Pfizer booster?

Where can I get my booster?

Am I 'fully vaccinated' without a booster?

Why were boosters so hotly debated?

Are other countries offering boosters?

Here's how to get your free home COVID test kits

Home COVID tests are now available at no cost to most Americans, as part of the Biden administration's effort to increase testing around the United States.

A "pan-coronavirus" vaccine might protect against many strains at once.

People who use e-cigarettes and test positive for COVID-19 have a higher frequency of experiencing COVID-19 symptoms, research has found.

The currently sold out tan-colored masks are not actually edible. There's a large warning on the packaging that says "do not eat bologna masks."

Here are 25 ways to stay warm this winter — with or without indoor heating — that won't break the bank.

How much candy do Americans eat in a year?

A healthy diet can include some candy. But if you eat too much, it can interfere with your appetite for the stuff your body actually needs.

WASHINGTON (AP) — The Biden administration on Tuesday quietly launched its website for Americans to request free at-home COVID-19 tests, a day before the site was scheduled to officially go online.

By the numbers: Stats that tell story of Biden's first year

WASHINGTON (AP) — By some counts, President Joe Biden can lay claim to a banner first year in office. But numbers also reveal plenty of setbacks.

LAS VEGAS (AP) — Her husband campaigned to help unite the country, but Jill Biden says “healing” a nation wounded by a deadly pandemic, natural and other disasters and deep political polarization is among her chief roles as first lady, too.

Biden to give away 400 million N95 masks starting next week

WASHINGTON (AP) — The Biden administration will begin making 400 million N95 masks available for free to U.S. residents starting next week, now that federal officials are emphasizing their better protection against the omicron variant of COVID-19 over cloth face coverings.