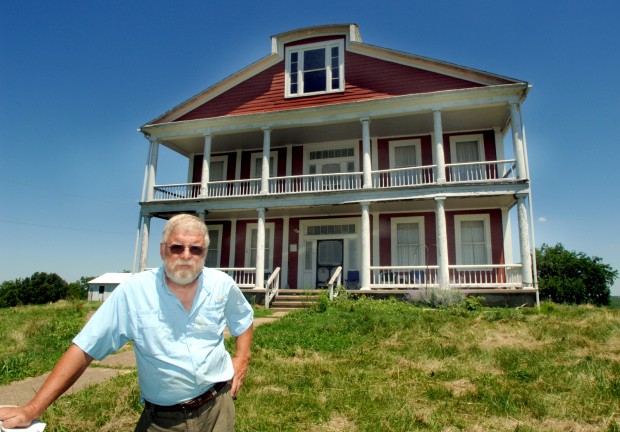 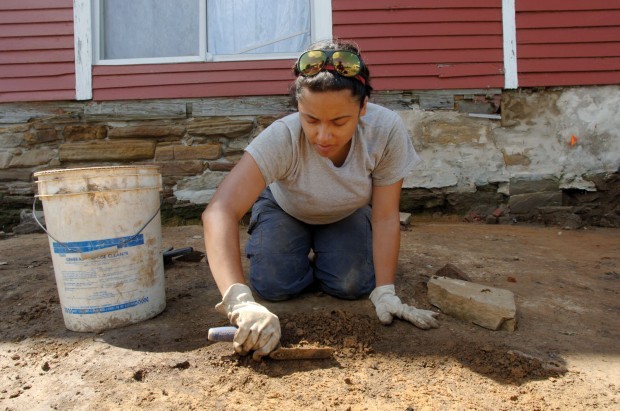 Eraina Nassa, an SIUC alumnus from New York City, works on the foundation of an original back porch, which seems to have been attached to the house during John Crenshaw’s time. SIU PHOTO COMMUNICATIONS 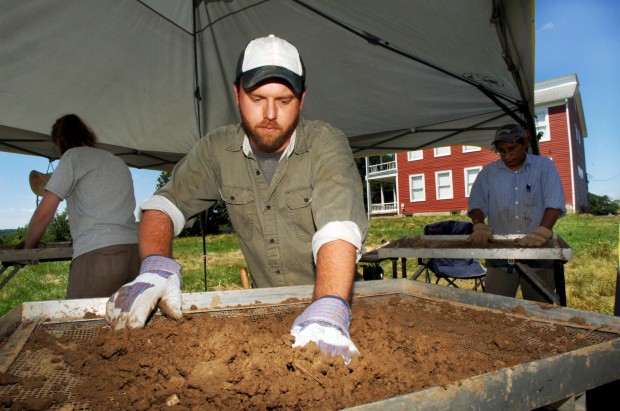 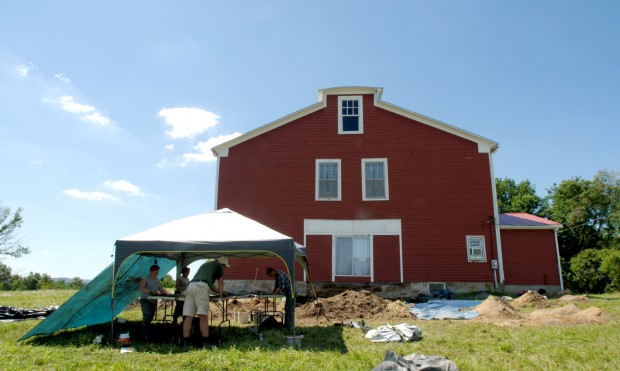 By andrea hahn, For the southern

A team of archaeologists is looking at a Southern Illinois landmark from a different perspective.

Under the direction of Mark Wagner of the Center for Archaeological Investigations at Southern Illinois University Carbondale, the team is exploring the backyard of the Crenshaw House near Equality in Gallatin County for the Illinois Historic Preservation Agency.

The structure, known locally as the Old Slave House, is a state-owned historic site at the center of dozens of sensational stories: Some of them true, many of them likely not. Though the archaeological team isn't out to bust myths - their main goal is to investigate the almost never-photographed yard surrounding the house - their quest to find out what was really there in John Crenshaw's day may alter some popular beliefs.

Wagner explained that the state of Illinois owns two acres of the original 10,000 that were part of the Crenshaw properties. Those two acres include the house itself and the yard. The project laid out for Wagner and his team is to find out what was in the yard. Old photographs, even Crenshaw-era photographs, of the house exist, but almost exclusively feature the front of the house.

"If the state opens this as an interpretive site at some point in the future, they'll need to know what the yard looked like, including where they could build or lay electric or sewer lines," Wagner said. "This will enable the state to develop the site without damaging or destroying things like the remains of cellars, privies,smokehouses once used by the Crenshaw family that may be located beneath the ground in the house yard."

The house, a three-story Greek revival mansion, was surmounted by a railed widow's walk from which Crenshaw could look down the valley to the Saline River to monitor his salt wells.

Wagner's team began its exploration with the aid of remote sensing, including use of ground-penetrating radar, electrical resistance meters and a magnetometer.

There is another side to the Crenshaw House, though, and the man who built it, one that is embedded - and perhaps exaggerated - in local legend.

Crenshaw allegedly engaged in illegal activities relating to freed slaves and indentured servants, and almost certainly, his business dealings regarding indentured servants were suspect. He was twice indicted for kidnapping, though never convicted, and is said to have been a member of the "Reverse Underground Railroad."

"By all accounts, he was a hard man," Wagner said. "This is not to whitewash him or excuse what he did, but he was not the only person in Southern Illinois or Kentucky engaged in these activities. What is remarkable in this case is that we still have a structure -his house - relating to the activities."

The archaeological team is not investigating the inside of the house, though they have seen the notorious third floor attic, where Crenshaw is said to have secretly housed his victims. However, the excavation immediately behind the house revealed the foundation of a porch once attached to the back of the house, possibly dating to the early 1800s.

Local legend indicates Crenshaw reportedly used a carriageway once located in this same area in the back of the house to sneak his victims inside. The discovery of the porch calls into question the truthfulness of this story about how Crenshaw might have gotten his victims inside secretly.

"Stories about Crenshaw and this house are really embedded in local memory," Wagner said. "When the house was a tourist site, everyone in the area came here as a school kid. We're trying to provide a better picture of what actually happened on the property."

The site is not open to the public.

ANDREA HAHN is a staff writer with SIUC University Communications.

PennyWise Episode 88: 5 tips to consider if you're giving gift cards this holiday season

PennyWise Episode 88: 5 tips to consider if you're giving gift cards this holiday season

How to talk to kids about school shootings

How to talk to kids about school shootings

Eraina Nassa, an SIUC alumnus from New York City, works on the foundation of an original back porch, which seems to have been attached to the house during John Crenshaw’s time. SIU PHOTO COMMUNICATIONS