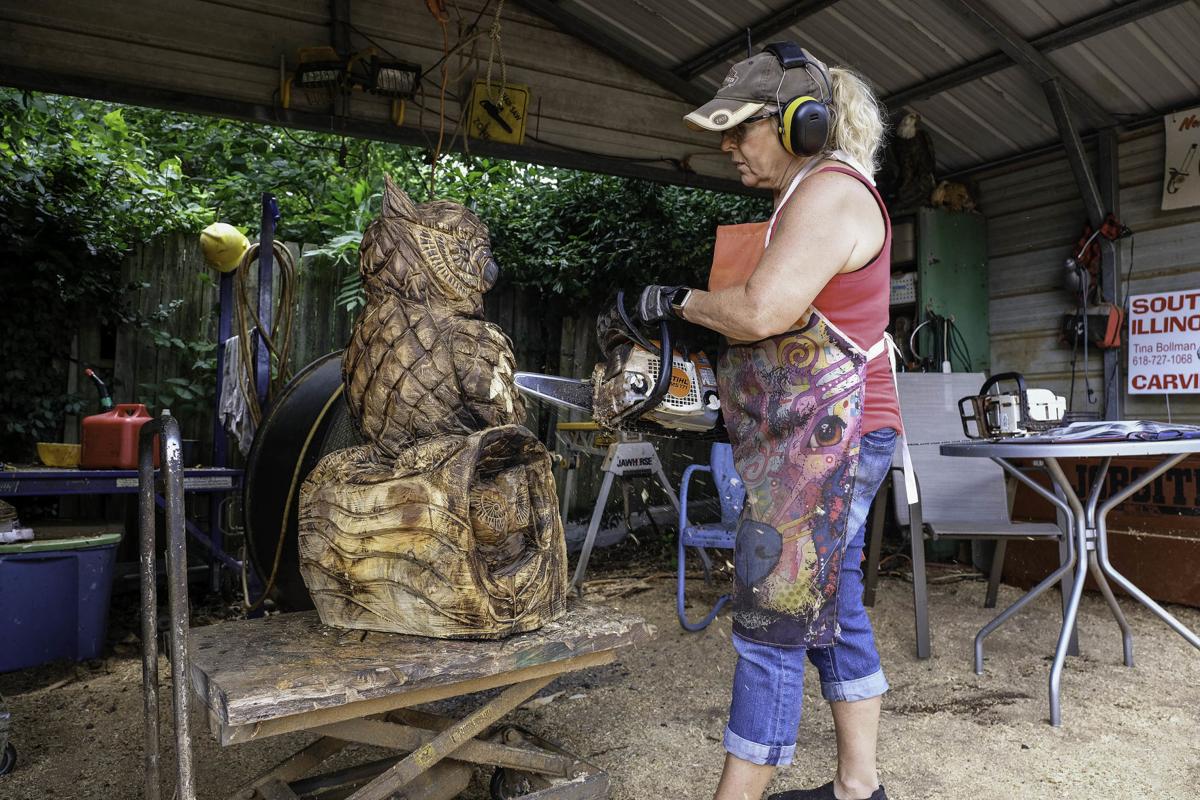 Tina Bollman works on a carving of owls at her home studio in Marion. 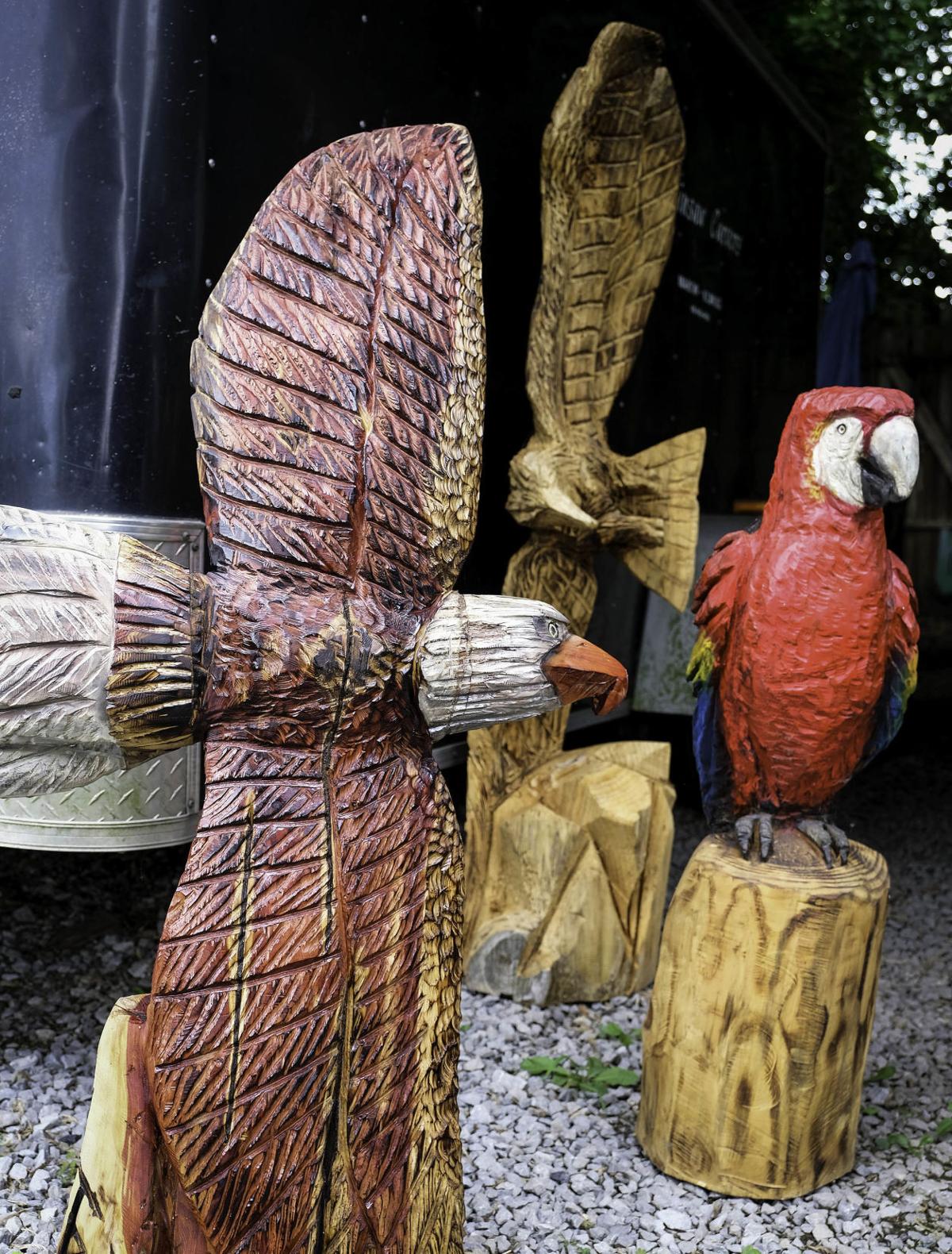 Bollman has carved a wide range of subjects. 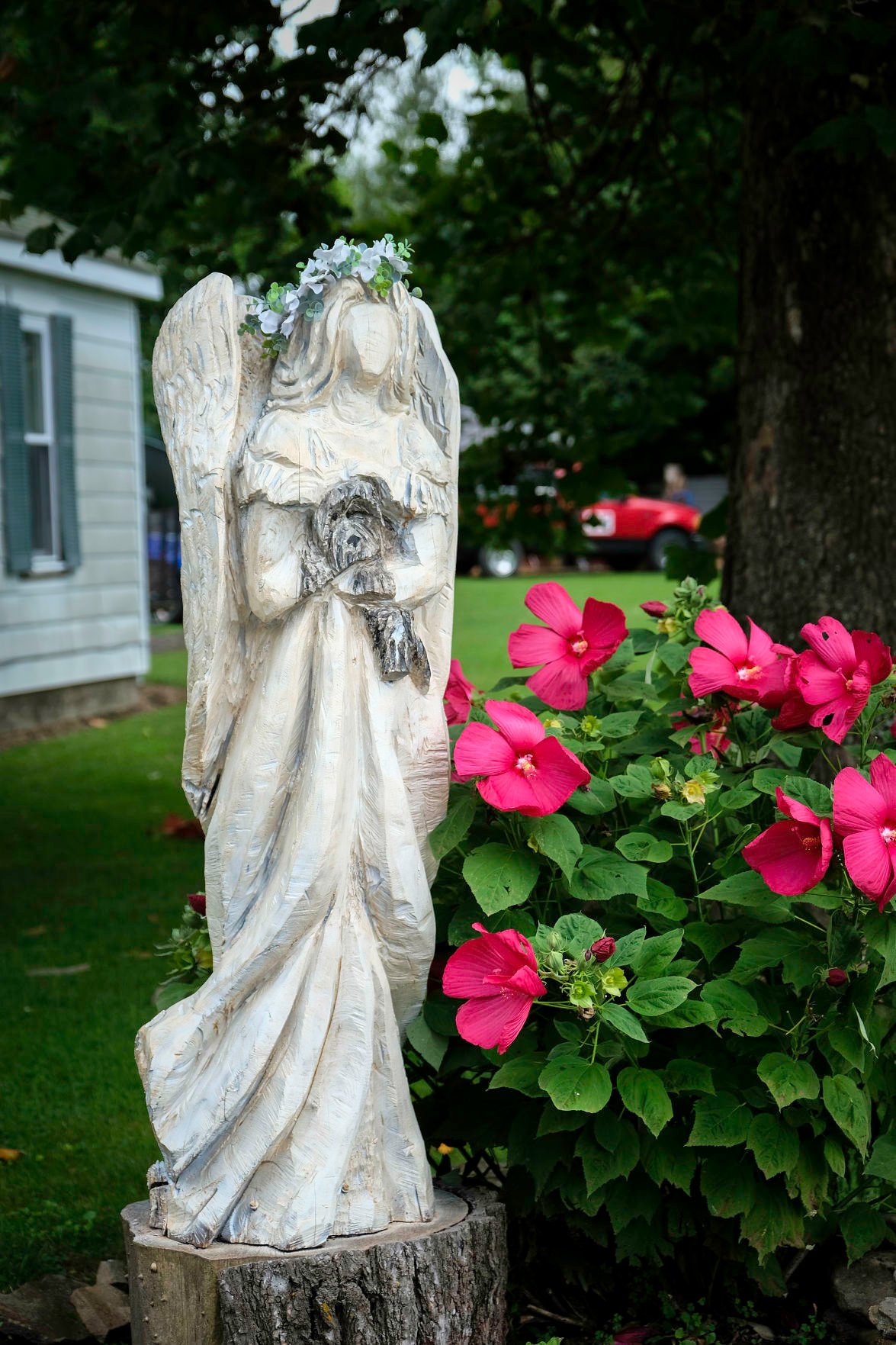 An angel carved by Bollman adorns the family’s yard. 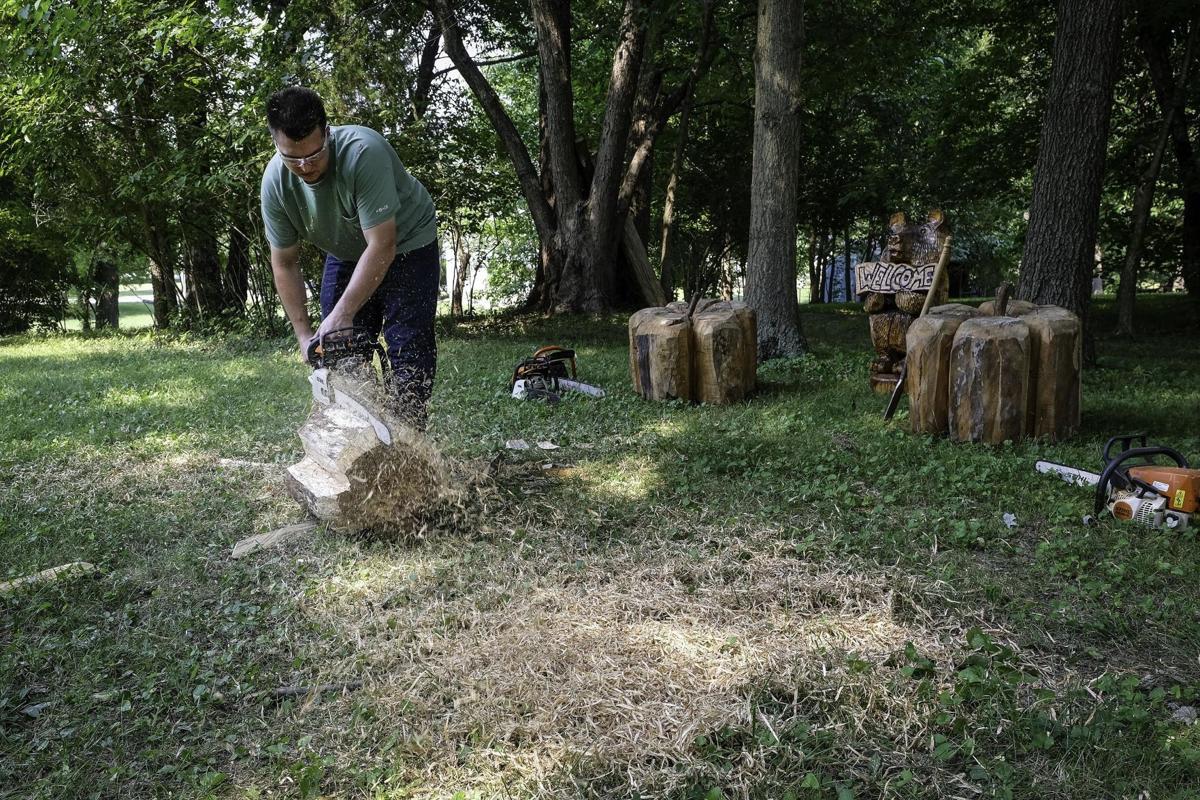 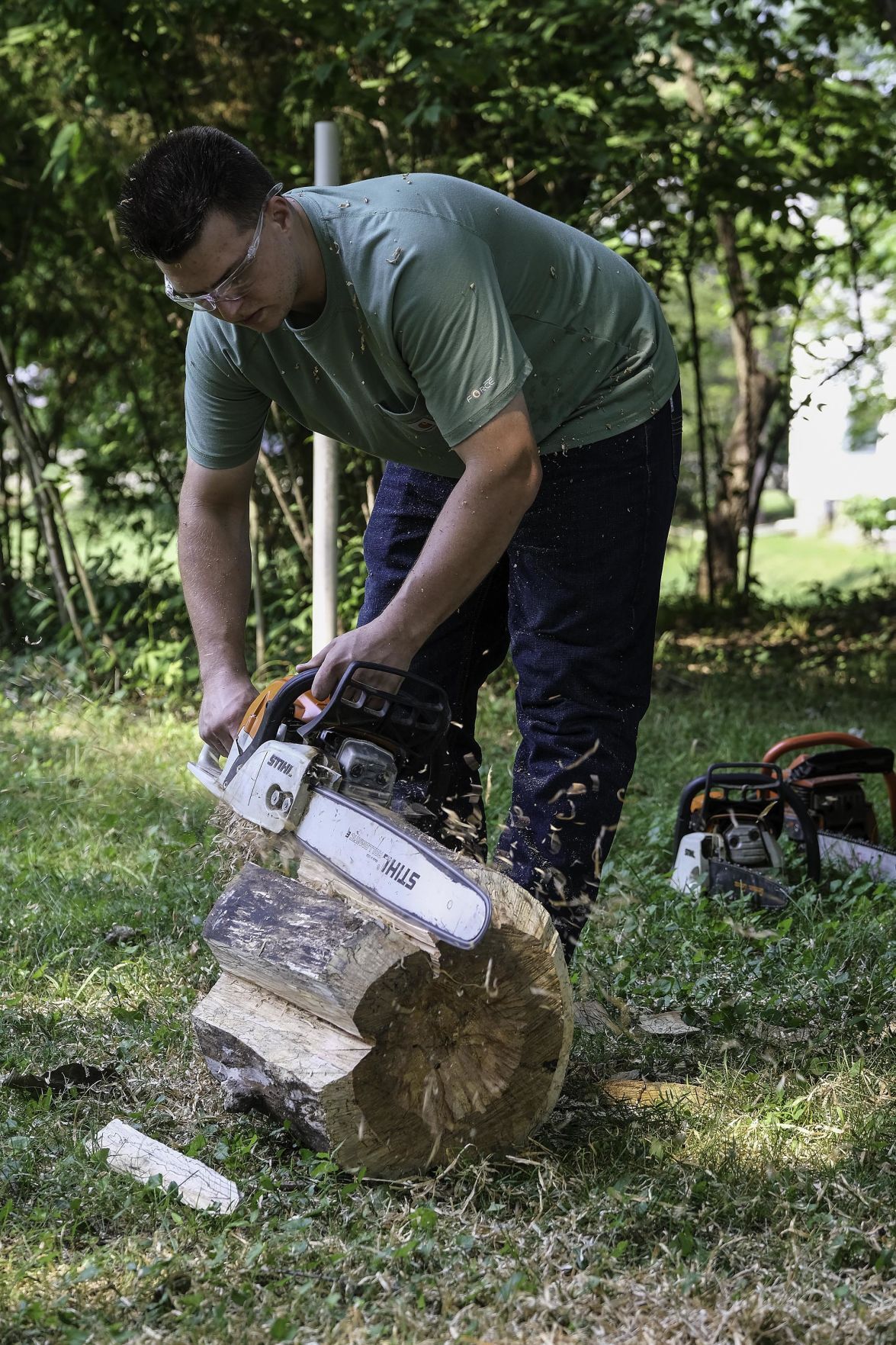 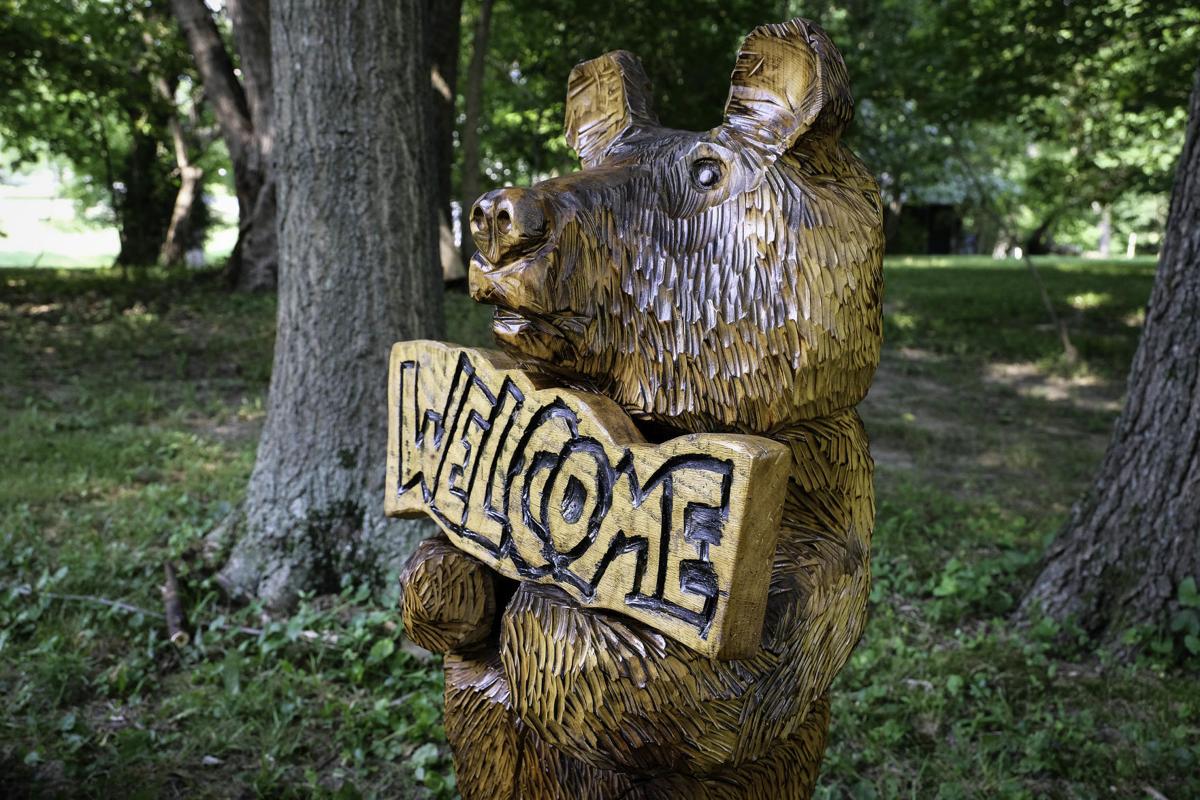 Bears are one of Evan Kern’s carving specialties.

Tina Bollman approaches her craft like any other artist. She looks at her medium and imagines what it could be, and at her disposal are a wide variety of tools, each with a specific purpose.

However, unlike many of her colleagues in the art world, Bollman’s attire is specialized: safety glasses, hearing protection and protective chaps. Her tools are different, too: gasoline-powered chainsaws in a variety of sizes and power.

Bollman, a second-generation chainsaw artist, is nonetheless an artist and her work can be seen at businesses, homes and special events all around the region, just like the work of her father, noted artist Art Boatright, who died earlier this year.

Bollman says it was about 20 years ago that she wanted him to do a carving for her.

“I asked him, ‘Can you make me this?’" she recalled, “And he said, ‘No, but I can show you.’ He bought me a small chainsaw and we started doing it together.”

Today, chainsaw carving is Bollman’s full-time job, carving everything from hummingbirds and eagles to bears and historical figures. They range from table-top size to towering, two-story carvings.

Many are carved at her Marion outdoor “studio” from logs left over from work her husband, Scott Bollman, owner of Scotty’s Tree Service, has done; others are carved on-site from the remnants of a tree.

A complete carving can take between a few hours to a week or more, depending on the size and complexity, Bollman said. For her, the carving is a way to connect to her father – as well as her son, Joey Phillips, who is learning the craft from her.

The pair has ten saws at their disposal, all of varying lengths and with chain bars specifically designed for carving. She said her preference is carving cedar and pine, but “on-site, you get what you get.”

Bollman’s work is impressive – so much so that she is often called upon to demonstrate as part of lumberjack shoes and other events, but she said she is still learning.

“Compared to a lot of carvers, we are novices; very novice,” she said.

'Thought I'd give it a shot'

Carterville chainsaw artist Evan Kern calls himself a hobbyist. He said he began carving with a chainsaw about five years ago when his uncle purchased a cabin that needed decoration.

“I’m cheap and I had a chainsaw, so I thought I’d give it a shot,” Kern said.

The grandson of artisans and the son of someone “who dabbled in chainsaw art,” Kern said he had been operating a chainsaw for years, just never had tried carving with it. Thanks to a couple of books of his father’s and a lot of time watching YouTube videos, Kern tried it.

The final product for his uncle’s cabin looked like a bear – so much so that Kern still uses it as an example of his work.

“I love doing caricature bears,” he said. “I’m not good enough to do realistic looking bears. I did an owl for a woman, but mostly I stick with bears and pumpkins.”

Kern’s pumpkins range from small autumnal decorations to ones so big they require a forklift to move. He can carve the small pumpkins in a few minutes. His bears, take much longer.

“I never do a bear in one sitting,” he said, adding that he prefers to take his time, making sure everything is right. “There are many times I don’t like how the nose or mouth turns out. I’ll chop it off and he’ll end up with a little smaller head because I want the nose to look different. The trouble is that it is really easy to accidentally make a bear look like a pig.”

Both Bollman and Kern approach their art with safety foremost in mind.

“Probably the hardest part was to learn how to use the saw without hurting myself,” Bollman said. “My dad helped me with that, but basically, once you get the technique on how to hold the saw and what you're not supposed to do, the rest of it is practice like anything else. The more you do it, the better you get.”

Kern said there is a passion for chainsaw carving among artists.

“Like any artist, this is not something we do for the money. I do it because I love seeing the bear come out of something someone else would throw in their fireplace and burn. It’s nice to create something out of practically nothing and it’s extremely satisfying,” he said.

For more information, including videos of chainsaw artists practicing their craft, visit www.thesouthern.com/lifestyles/magazine/

For the first time in two years, the popular John A. Logan College Autumnfest craft and vendor fair is back for 2021, but in a new location.

Tina Bollman works on a carving of owls at her home studio in Marion.

Bollman has carved a wide range of subjects.

An angel carved by Bollman adorns the family’s yard.

Bears are one of Evan Kern’s carving specialties.