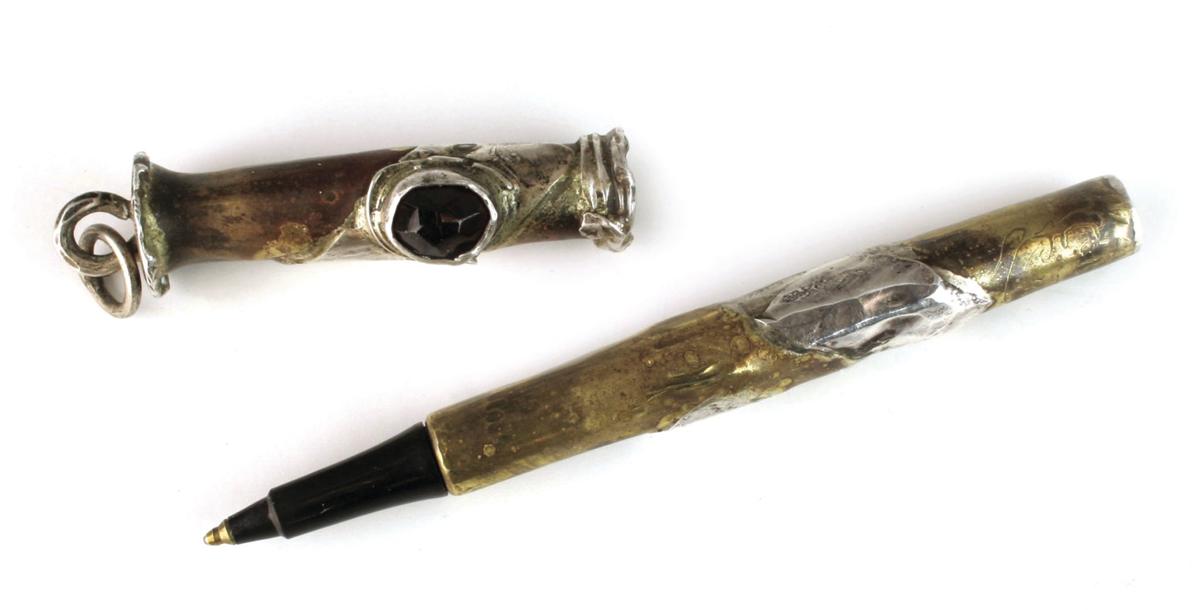 D.J. Kennedy is known for his irrepressible creative spirit. He has been making fountain pens for decades. He is considered a rock-star in the world of pen collectors. 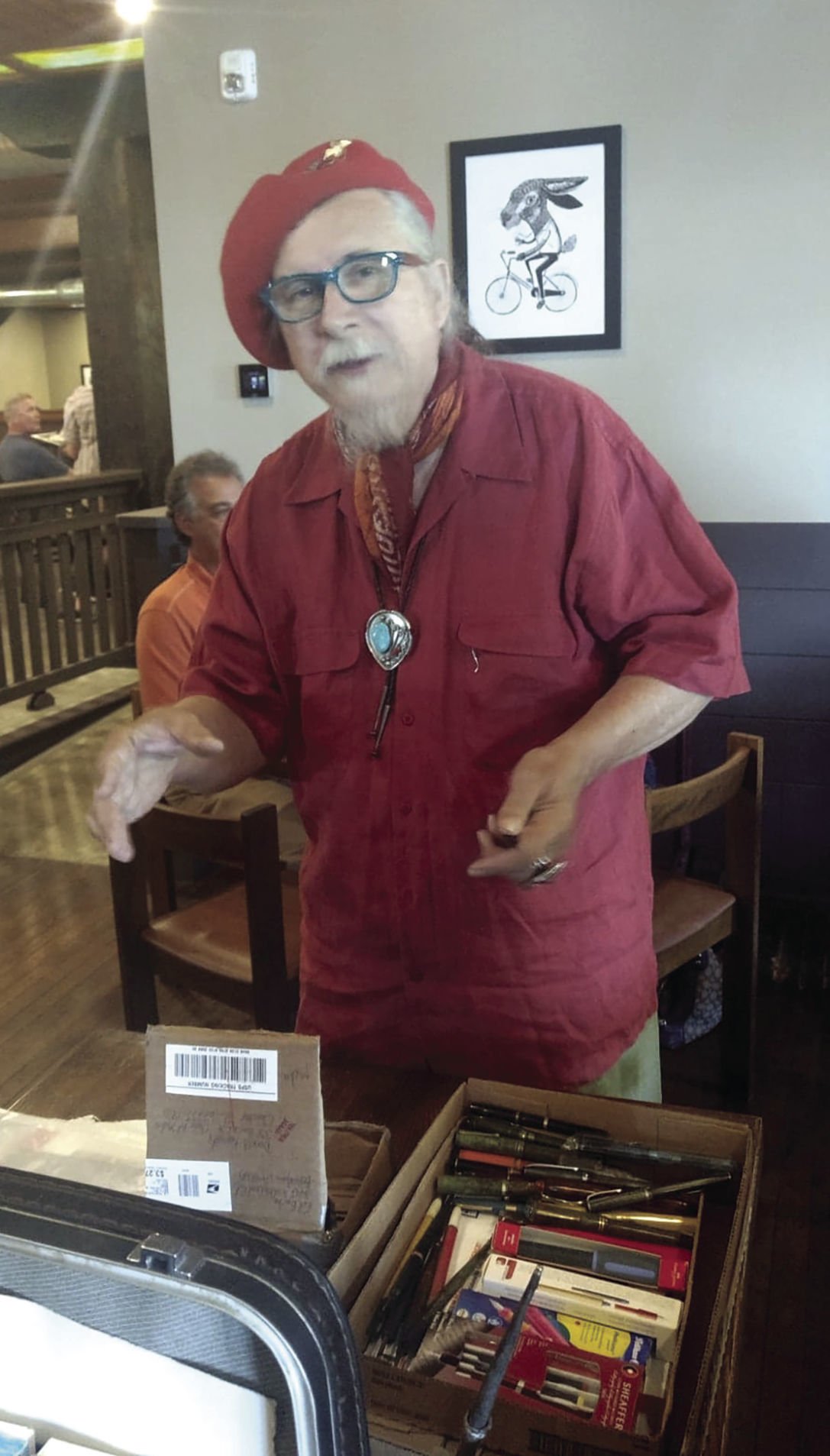 D.J. Kennedy is known for his irrepressible creative spirit. He has been making fountain pens for decades and is considered a rock-star in the world of pen collectors. 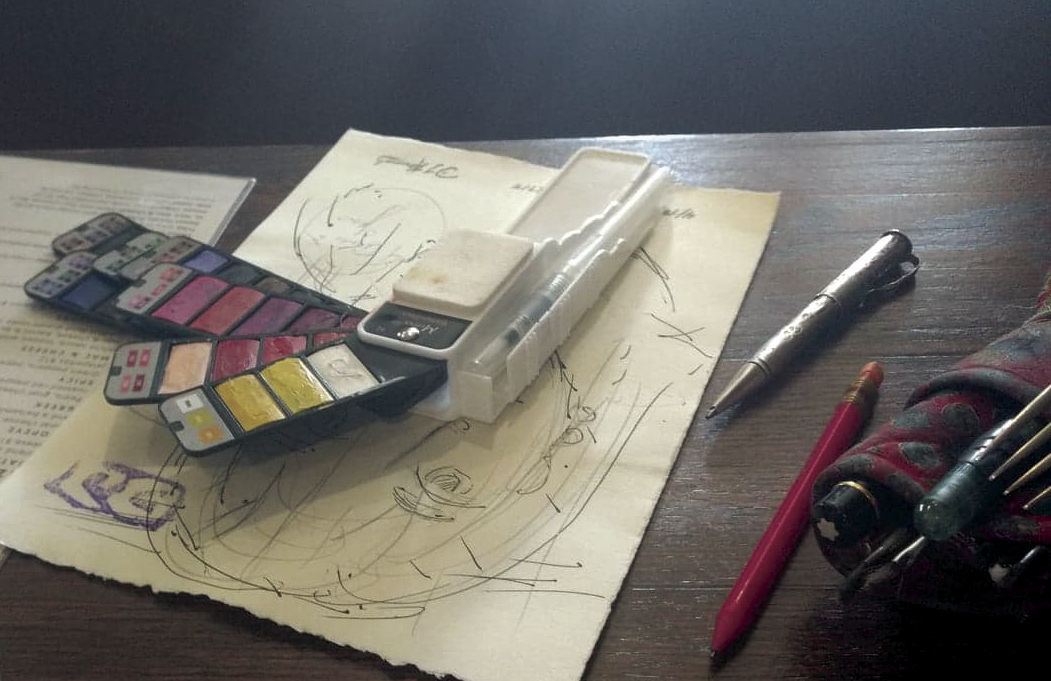 Kennedy completed his BFA degree in metalworking at SIU Carbondale in 1991. He remains one of the most prolific of artists. He makes jewelry, paints, sculpts, and plays (and buys and sells) trombone.

The act of writing civilized humanity. When we learned to take that which is indescribable and capture part of it in time in a permanent way, then transmit that to another person, commerce grew and cities flourished.

It’s no wonder that the first scribes and scholars were viewed with awe. Historians estimate that 90 percent of people in ancient cultures, like the Sumerians or the Egyptians, had no knowledge of how to read and write.

Fast forward a few thousand years, and that percentage was nearly reversed. Colonial America was obsessed with the written word. In 1776 there were more newspapers in Philadelphia than in Paris according to Indiana University Bloomington library documents. Literacy rates in the New England colonies reached more than 95 percent, cited from “Literacy in Colonial New England: An Enquiry into the Social Context of Literacy in the Early Modern West” published in 1974 by Kenneth A. Lockridge.

At that time writing was done with ink and a quill, as evidenced by historical representations of the signing of the Declaration of Independence and other portraiture of that era. But quills were impractical, so various innovators came up with the dip pen as a practical substitute.

A dip pen is composed of a nib and a handle that holds the nib. Metal nibs began being mass-produced in 1822, were cheap and easy to make, and played a large role in improving education and literacy as their low cost made them affordable to those who previously could not afford writing tools, according to www.historyofpencils.com.

But the dip pen soon became outmoded as an America-on-the-move required something portable. Enter the fountain pen. John Jacob Parker patented the first self-filling fountain pen in 1831. Lewis Waterman improved on the design using air to induce a steady and even flow of ink and reduce leaks.

“Waterman sold his hand-made pens out of the back of a cigar shop when he first got started, and he grew his company into one of the largest pen manufacturers in the world,” said D.J. Kennedy.

Kennedy, who grew up in Chester and is known for his irrepressible creative spirit, has been making fountain pens for decades. He is considered a rock-star in the world of pen collectors.

“I have used, designed, repaired, rebuilt, or made pens since I was a kid. I grew up using dip pens and an Esterbrook (fountain pen), given to me by my aunt, who thought I had terrible handwriting and was hoping a better pen might fix that,” remembered Kennedy.

Not only did his penmanship improve, Kennedy said, but he gained a life-long obsession with fountain pens and their creation. He has fabricated thousands of pens using copper, silver and gold housing, some inlaid with gemstones and most detailed with organic patterning reminiscent of modernist jewelry.

But not derivative. Kennedy’s creations are unique, and wholly his.

“When I started making them, I used parts from other pens. I started using pen nibs and feeds and sections and fabricated pen bodies raised from flat sheet metal. The inspiration for the metal pen cases came from several classic sources,” shared Kennedy.

Kennedy said his early prototypes were often clunky and nonfunctional. He spent at least a year experimenting before taking a box of his pens to Michael Fults — in the world of pen collectors, Fults was royalty — who was impressed enough to give Kennedy a supply of pen parts at no cost and sold his early efforts without taking a commission.

In 1991, Kennedy completed his BFA degree in metalworking at SIU Carbondale, where he studied with L. Brent Kington and Richard Mawdsley. After graduating, he started attending pen shows and people started to collect his work in earnest.

“I went to D.C., Philly, Little Rock, Chicago, Miami. All the big ones anyway. From those shows, I got commissions, and materials. I did a lot in trade at the beginning. Pens for emeralds, that kind of thing. It was the prosperous '90s and things just took off for me,” Kennedy said.

Kennedy hit the very top of his market when the prestigious retailer Neiman Marcus requested to carry his work. Kennedy made pens for the company from 1994 to 1996. In 1994 and 1995 they were featured in Christmas catalogs, amongst high-end offerings from Montblanc and Shaffer.

“Of course, once the catalog hit, Shaffer would no longer supply me with new nibs, but the whole thing was really an unexpected success,” said Kennedy.

In 1997, Kennedy said the number one gift for Neiman Marcus was a pen of his design — a chased and repousséd Parker Centennial cased in 22-karat gold with all internal parts. His 90th-anniversary pen — a sterling body case with black onyx ends, an 18-karat forged clip, and a cap band of 18-karat yellow gold — was the second most popular gift that year.

Along with the notoriety came publicity, and Kennedy spent some time with the jet-set in Los Angeles, made some television appearances, and enjoyed hob-nobbing with the rich and famous.

But in the late 1990s, a series of global economic-financial crises threatened the U.S. economy, and the Neiman Marcus contract was not renewed. So Kennedy adapted and refocused his pen manufacturing as a personal art instead of a commercial enterprise.

But if the social media chatter about his recent appearance at the St. Louis Pen Show, and the hundreds of questions about him in online chat groups are any indication, Kennedy’s work is more collectible than ever.

And Kennedy remains one of the most prolific of artists. He makes jewelry, paints, sculpts, and plays (and buys and sells) trombone. He started playing in the fifth grade, began performing with the infamous Big Larry sometime in the 1980s, and is numbered among a close group of Southern Illinois musicians who play in numerous bands.

He also ran a bicycle shop for more than a decade and has some tales — wicked tales — about Greg LeMond. But that’s a story for another day.

D.J. Kennedy is known for his irrepressible creative spirit. He has been making fountain pens for decades. He is considered a rock-star in the world of pen collectors.

D.J. Kennedy is known for his irrepressible creative spirit. He has been making fountain pens for decades and is considered a rock-star in the world of pen collectors.

Kennedy completed his BFA degree in metalworking at SIU Carbondale in 1991. He remains one of the most prolific of artists. He makes jewelry, paints, sculpts, and plays (and buys and sells) trombone.