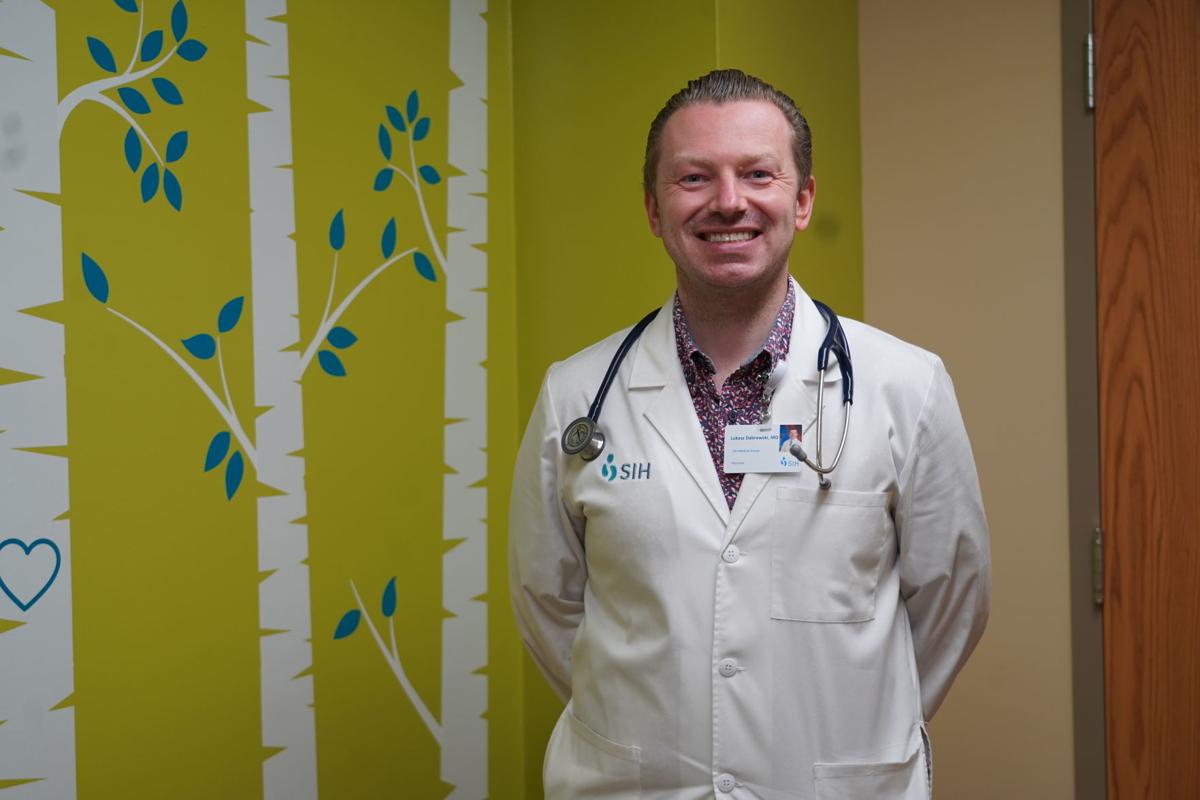 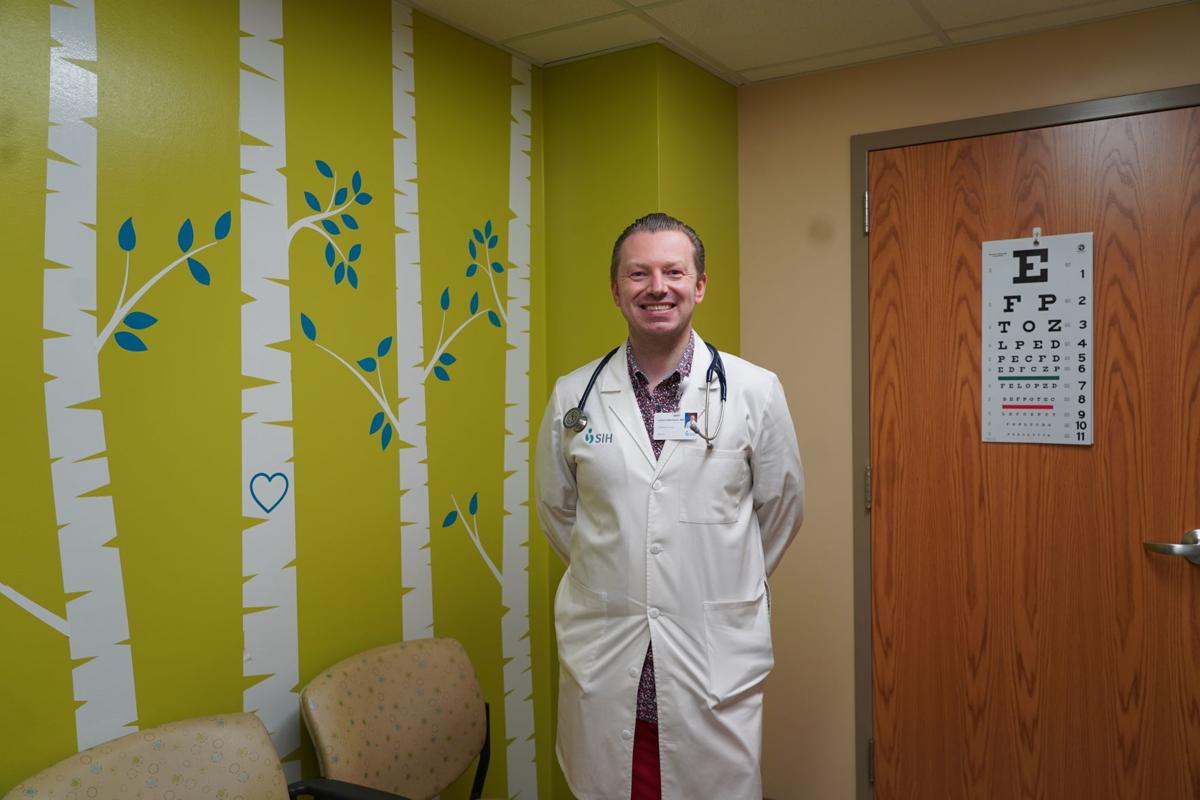 Dr. Lukasz Dabrowski is the kind of pediatrician that makes you want to be a kid again. It’s no understatement to share he is beloved for his kindness and ability to connect with his young patients at each stage of their lives. An East Coast transplant and now “more than happy” Southern Illinoisan, Dr. Dabrowski, his wife, Kristina, and 5-year-old daughter, Lexi, call Carterville home.

Dr. Dabrowski grew up in New Jersey, the son of entrepreneurs with an affinity for numbers. His strong work ethic was gleaned working for his father’s commercial roofing business at an early age; he began putting in sweat equity at the age of 11 or 12. His mother, a former math teacher, owned and operated beauty salons. For fun, the family often did math problems. Dr. Dabrowski’s natural inclination not only toward math, but also science, stoked his passion for medicine.

“After finishing my undergrad in chemistry at New York University, I went to medical school to become an interventional cardiologist. I liked the physics and components of it,” said Dr. Dabrowksi.

So how did he end up in pediatrics? The keen eye of his future wife.

“Kristina pointed out I was happiest during my pediatric rotations; it dawned on me to reconsider my initial plan,” Dr. Dabrowski says.

After some brief soul-searching, he pivoted to pediatrics. His clinical approach mirrors that of his family doctor in New Jersey who operated a home-based practice with extended hours, with a sort of “open-door” policy.

“I've tried to mirror that as much as I possibly can in order to be available to my patients. I like the fact that folks are able to get ahold of me,” he said.

Pediatrics indeed proved to be his calling.

“I love babies. They're just so sweet. I love young families. It gives me an opportunity to convey things my wife and I went with or went through with our daughter. Jokingly, my wife always says our daughter is my street cred. Lexi likes to be very, very sassy,” laughs Dr. Dabrowski. “She puts us through a lot of different scenarios that allow me to be able to relate to others. And so that's why I really enjoy meeting with young families and going over the stories of what we've dealt with in order to make their experiences a lot more pleasant … being a young parent can be an extremely stressful process.”

As his patients grow into each stage of their lives, Dr. Dabrowski looks to connect with each of them on what interests them and makes them unique.

“I especially try to empower young adolescents to pursue their dreams. I wholeheartedly try to support their endeavors as much as I possibly can,” adds Dr. Dabrowski, who says a shared focus on his patients’ mental health is one of his priorities.

Dr. Dabrowski joined SIH Center for Medical Arts in Carbondale five years ago. When he and Kristina began searching for the right community toward the end of his residency in California, they had three requirements: a surrounding population of at least 100,000, a location two to three hours from a major airport and close proximity to a Target. Come again?

“If it didn't have a Target, it wasn't family-oriented enough for us … and so if it didn't have any of those, I wouldn't even take the time to talk to those folks. We eventually narrowed it down from over 100 places to nine. This was our favorite and it still is.”

The Dabrowskis have a shared love of Broadway and community theater. Kristina was involved in theatre in high school and college, and Lexi is part of a dance program in Energy. But don’t think for a moment that Dr. Dabrowski himself doesn’t have some performance pizazz. A little-known fact about the doctor: His parents wanted to make sure their son knew how to “cut a rug.” They enrolled him in ballroom dance classes on the eve of his first sixth grade school dance. He advanced to the competitive circuit and, at one time, was a two-time national champion in his category.

The doctor put his dance prowess to excellent use on one of the most important days of his life: his wedding. He choreographed his first dance with his wife.

In his off time, Dr. Dabrowski enjoys classic television murder mysteries (think “Matlock” and “Colombo”), board games, playing vintage Super Nintendo with his daughter or trying out local cuisine with his family. Now, true Southern Illinoisans at heart, the Dabrowskis' shared love of the region extended to his parents. They sold their businesses and relocated to Herrin three years ago.

“Becoming part of the community has been wonderful. I thought it would be more challenging to be as embraced as I has been. We love it here. And I am amazed that my wife, who grew up on the West Coast, has assimilated so well to the area and to the community. Our family and friends are blown away when they come out and visit. I think the one thing I realized is that sometimes, it's good for people to move around to see other things, because then when you finally find that special gem, it makes you appreciate it that much more.”

MEDICAL PROFILE is a series of articles highlighting the medical staff at Southern Illinois Healthcare. All content is provided courtesy of SIH.

Winter provides opportunity to see a different side of Southern Illinois

As Mark Dolan travels the nation’s backroads and byways in what looks like an ambulance, he’s not responding to an emergency. He is searching out the personalities and places behind America’s obsession with barbecue.