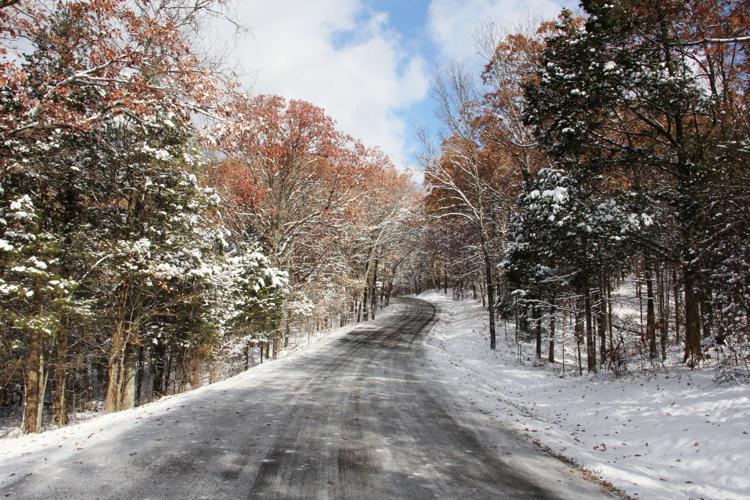 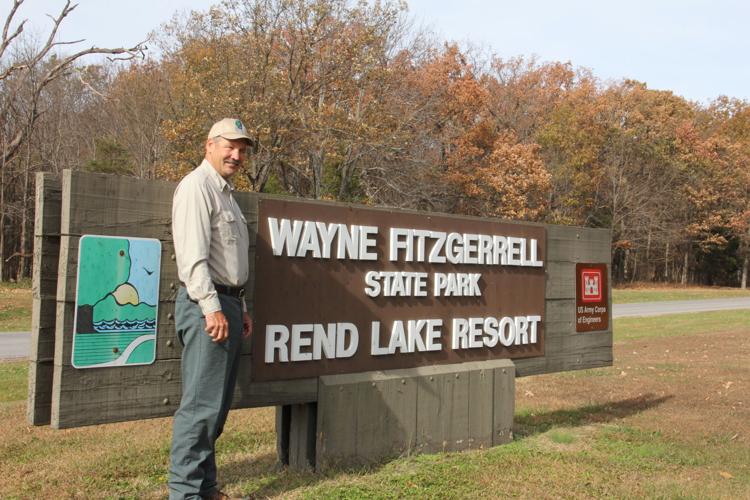 Ralph Hamilton's career with the Illinois Department of Natural Resources spanned 37 years, much of that time was spent at site superintendent at Wayne Fitzgerrell State Park. 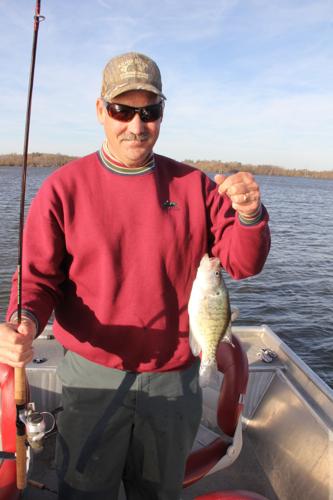 Ralph Hamilton not only talked the talk, but he walked the walk. While site superintendent at Wayne Fitzgerrell State Park, Hamilton still found time to catch a few Rend Lake crappie. 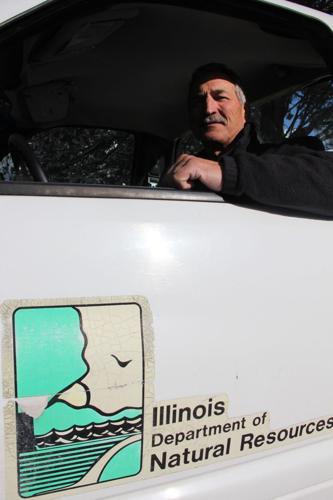 Bill Reynolds in his vehicle. 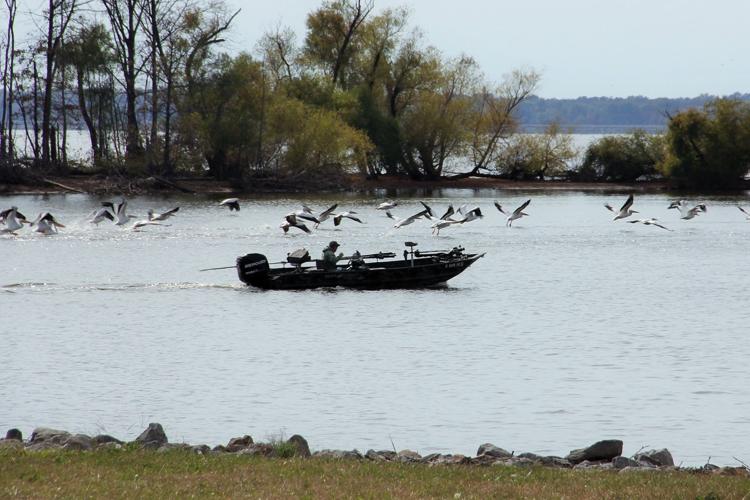 A fisherman heads out to the main lake from the Wayne Fitzgerrell State Park boat ramp. 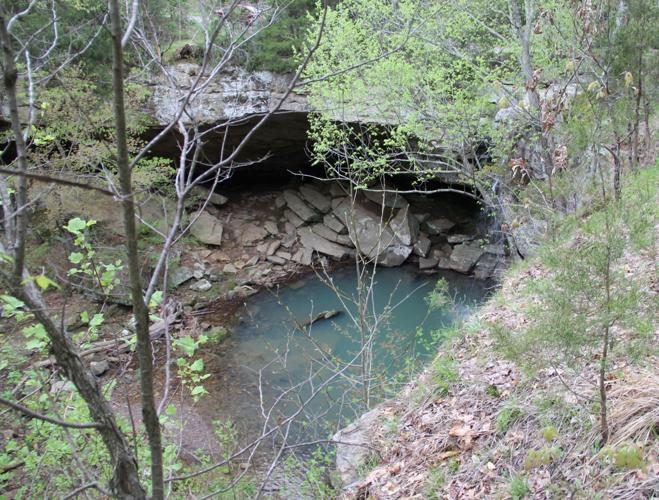 A small waterfall and pool at Ferne Clyffe State Park. 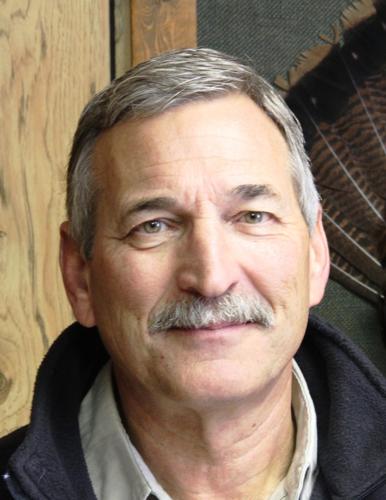 The mid-1990s was the golden age of the Illinois Department of Natural Resources. The department was fully staffed and well funded.

Just a decade later, IDNR was a mere shell of itself. The department fell prey to the budget crisis of the early 2000s. Amid statewide cutbacks in the early years of the century, the IDNR saw its budget slashed by $14 million alone in FY 2009.

And, at times the Rod Blagojevich administration attempted to use the IDNR budget as its own bank account. In 2009, the federal government ordered Blagojevich to restore funds illegally “swept” from IDNR accounts.

In 2001, IDNR had nearly 2,000 employees, including 172 conservation officers. By 2009, staffing levels were cut to about 1,300 employees and 133 officers. Those numbers would drop even further until 2012 when the Illinois General Assembly passed the Sustainability Act.

Despite those grim numbers, the general public wasn’t really aware of the dire straits the department found itself in thanks to the dedication, ingenuity and behind the scenes work of site superintendents and park staff.

Generally speaking, the parks appeared to be well-maintained, but it was a façade perpetrated by an army of unsung heroes.

“There was never enough money or staff to do what you wanted to do,” said Ralph Hamilton, former site superintendent at Wayne Fitzgerrell State Park at Rend Lake. “You just had to prioritize to keep some areas open to the public and looking decent. We didn’t have budgets for a few years. We worked for grants, farm lease money and searched for any revenue we could to keep those areas open.

“You just had to try to salvage parts off old equipment. We got old equipment from the Illinois Department of Transportation because there just wasn’t money to purchase things at that time. There were a lot of good people in the department. You had to be creative and prioritize.”

Hamilton used federal grants for bike trails and boat ramps to supplement the dollars coming out of Springfield.

While the most public areas continued to be well-maintained, it didn’t take a deep scratch to see the deferred maintenance and inevitable deterioration of facilities. The lack of funding and staffing cutbacks had a predictable effect on morale within the department.

“One of the biggest problems was convincing my maintenance staff they couldn’t to maintain at the level we were at,” said Bill Reynolds, former site superintendent at Ferne Clyffe State Park. “They took great pride in their sites. We couldn’t replace equipment. We couldn’t replace staff members.

“We had to reprioritize – go back to the most important things and get that done first. In that process we deferred a lot of maintenance that had to be done. You tried to be ready, have your plans ready in case someone called and said we had a little bit of funds for you," he said.

Like Hamilton, Reynolds turned his attention to alternate funding sources, including non-government agencies like Quail Unlimited or the Wild Turkey Federation.

“We were able to buy some key pieces of equipment we weren’t able to buy otherwise,” Reynolds said. “It’s nothing like being funded by the agency.”

Even some of those alternate sources of funding dried up for a while when grant writing positions within the department were eliminated.

“We left money on table by not getting matching funds on grants,” Hamilton said.

At the same time, site superintendents banded together to stretch dollars in anyway they could. Many superintendents installed wood-burning stoves at their site offices, cutting wood to save on heating expenses. Sometimes department rules were bent to keep parks presentable.

“We shared equipment between us, transferring it back and forth, unbeknownst to them,” Hamilton said. “If you needed equipment, we swapped back and forth, you borrowed or cannibalized other equipment. It’s embarrassing. That’s where you were at for a while. Through experience, you have to find a way to keep sites open.”

But, obviously, cost-cutting measures can only go so far.

“We deferred a lot of projects,” Reynolds said. “You have to address the leaky roof, but if the building needs a coat a paint, you might not get that paint. You tried to work on what visitors could see. A lot of visitors just drive through. You start looking ‘If I drive through, what do I see?’ Some of that, you just have to get done somehow.”

After Blagojevich was removed from office in 2009, Marc Miller was named director of IDNR by Gov. Pat Quinn. Although the new administration was sympathetic to the plight of IDNR, dollars were still tight.

“What came through in all of that management work was the absolute dedication of our site superintendents and their ingenuity for the bailing wire and duck tape in keeping the equipment running to get through a season or a particular task,” Miller said. “That happened all the time. We put a system in place to allow them to borrow equipment and encouraged that. We encouraged them to buy certain pieces of equipment that could be shared. That was stuff coming up from the bottom. Those guys were coming up with ways to make life easier and stretch a dollar.”

The Quinn administration went to work establishing a dedicated source of funding for IDNR. Prior to 2012, IDNR funding came through General Assembly appropriations, meaning funding was at the whim of the state legislature.

The Sustainability Bill was passed in 2012, guaranteeing the IDNR would receive $2 from every license plate sold in the state. Again, site superintendents and their staffs were part of the effort.

“We asked them to send pictures of equipment they were using that was very far out of their useful life,” Miller said. “The superintendents sent in a lot of great material that we were able to show legislators.”

While the Sustainability Bill put the IDNR back on more solid financial footing, the agency is still far below staffing levels of the 1990s.

While those lean years were frustrating, both Hamilton and Reynolds, both retired, look back at that era with pride. Hamilton spent 37 years with the IDNR, Reynolds 35.

“There is no anger,” Hamilton said. “There was a sense of accomplishment. It was frustrating, but we loved what we did. The 90s, you just think those good days are here forever. We had one of the best departments in the country.”

“I felt like I had a lot of accomplishments,” Reynolds said. “It was help from people in Springfield – that agency was good about trying to find ways to get good projects done. It’s difficult to sit there and watch things dwindle, but there is still a job to be done. You just had to look at things a little bit differently.”

Check out the most popular stories you may have missed from The Southern last week.

I’d love to be here in 2052 to see how the Dogtooth Bend area of Alexander County has progressed.

Outdoors | Discover the birds who winter in Southern Illinois

When it comes to birds, winter is another world in Southern Illinois.

Carbondale native Melissa Triplett is a mom, musician and also the Williamson County director of the Restore Network which recruits and suppor…

Photos: Here are the birds you can see in Southern Illinois this spring

Right now, Shawnee National Park has a nice ring to it.

Check out Baltz's interviews with two Women in Fire fellows as they discuss conservation and fighting wildfires.

Heron Pond is one of the most ecologically diverse areas in Southern Illinois. Although the walk to Heron Pond is a short one, the winding pat…

A research project by an Illinois State University junior shows surprising wildlife diversity along streams that flow through green areas in Normal.

To merge or not? Carbondale council agrees to entertain new ideas from Park District

After years of fits and starts over a potential merger, the City Council has agreed to entertain a new proposal from the Park District — shoul…

Why did the Carbondale Park District reject the city's proposal to merge?

Spend your day with the beautiful end of others with this gorgeous gallery of Southern Illinois sunsets sprawling across the sky.

The second edition of A Field Guide to Amphibians and Reptiles of Illinois is on the shelves.

Today, several hundred thousand tourists flock to the tiny Ohio River village of Cave-In-Rock to visit the massive cave carved out of the lime…

This summer marks the 70th anniversary of Camp Little Giant, a camp for persons with disabilities at Touch of Nature Outdoor Education at SIU,…

Four Super Bowl snacks to keep away from your dog

What type of music helps you fall asleep easier?

What type of music helps you fall asleep easier?

What is Kawasaki disease and how does it affect children?

What is Kawasaki disease and how does it affect children?

Workout smarter, not harder with these simple tips

Workout smarter, not harder with these simple tips

Ralph Hamilton's career with the Illinois Department of Natural Resources spanned 37 years, much of that time was spent at site superintendent at Wayne Fitzgerrell State Park.

Ralph Hamilton not only talked the talk, but he walked the walk. While site superintendent at Wayne Fitzgerrell State Park, Hamilton still found time to catch a few Rend Lake crappie.

Bill Reynolds in his vehicle.

A fisherman heads out to the main lake from the Wayne Fitzgerrell State Park boat ramp.

A small waterfall and pool at Ferne Clyffe State Park.