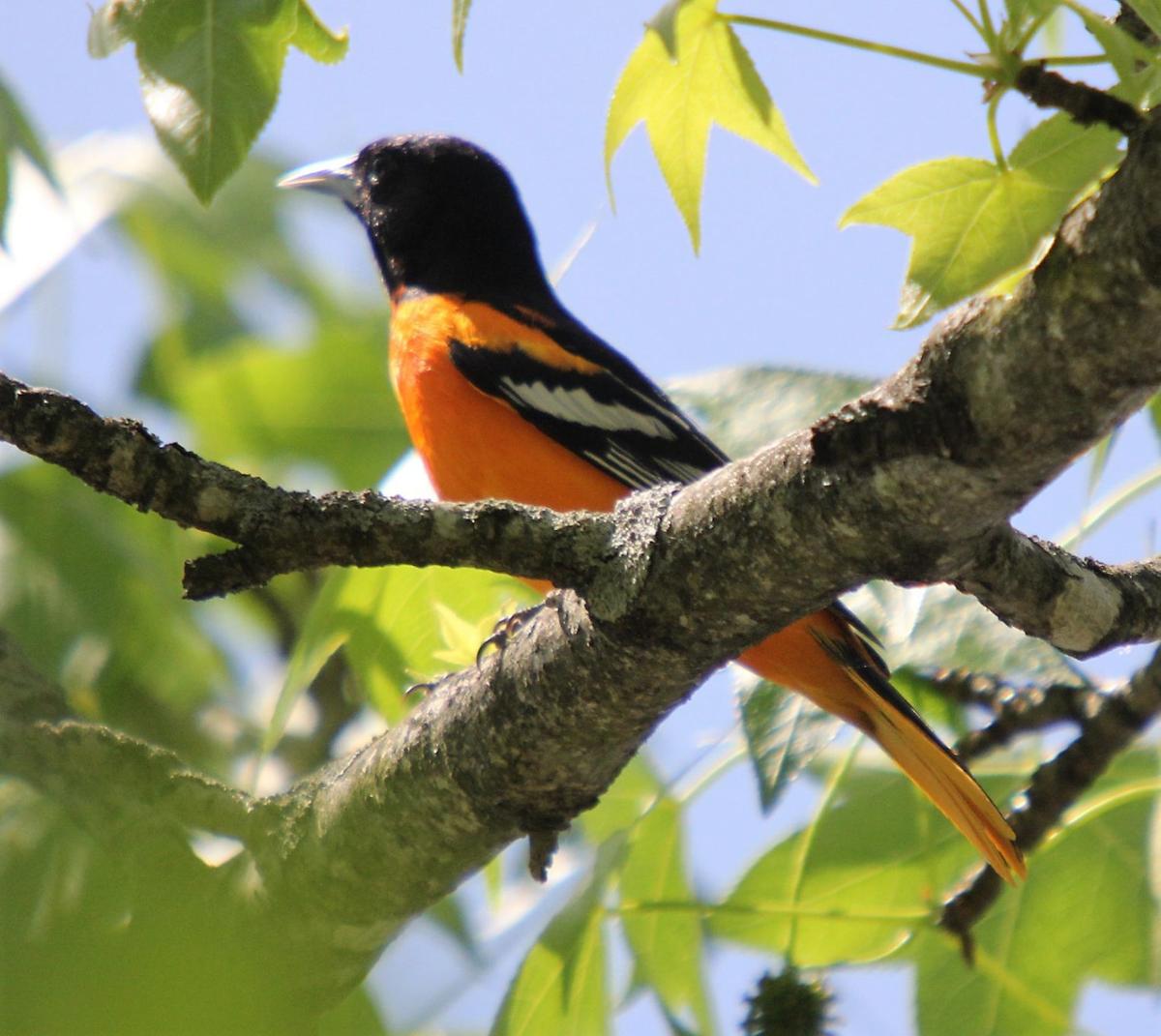 The male Baltimore oriole is perhaps the brightest of the spring migrants. 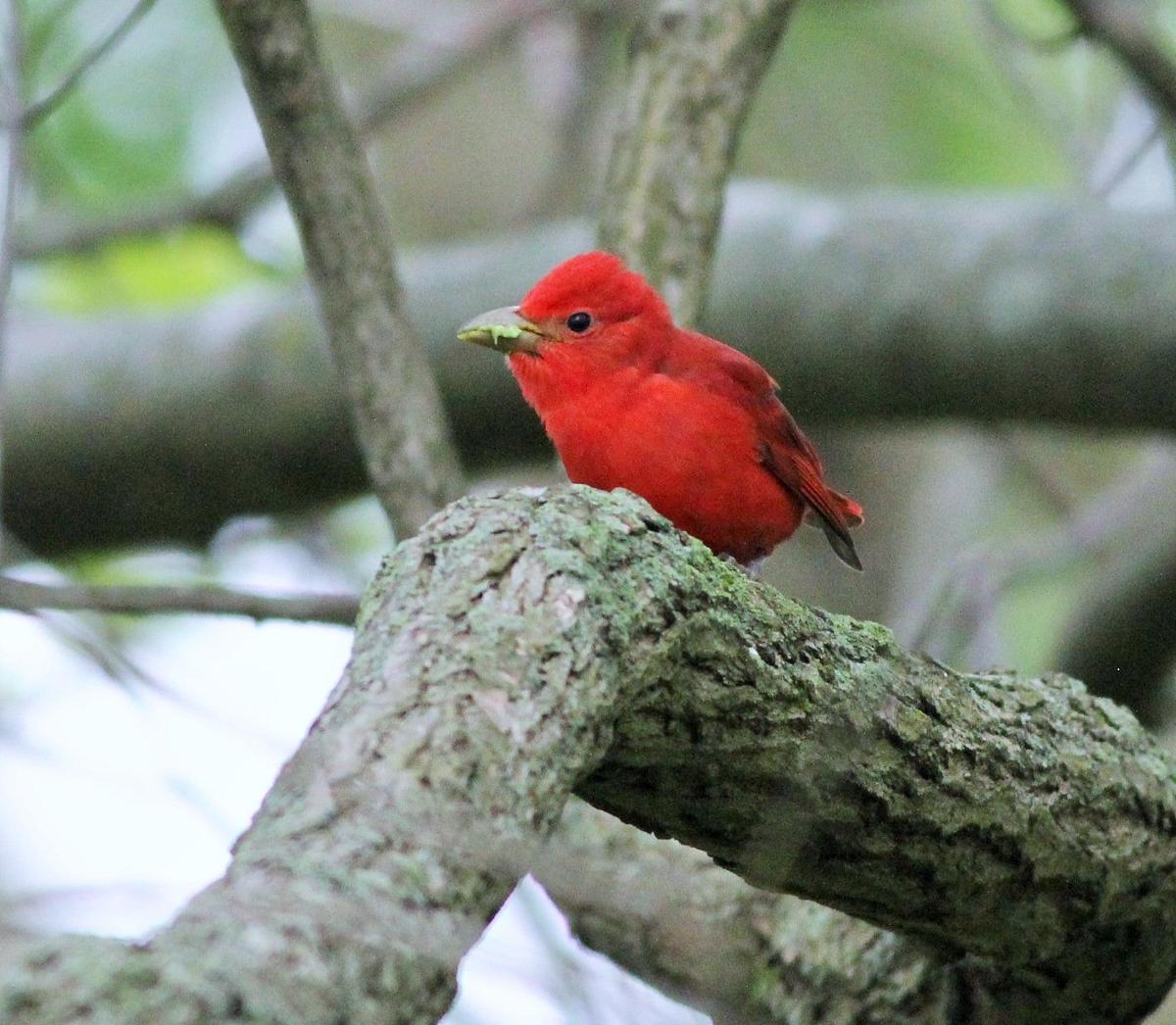 The summer tanager adds a dash of color to the Southern Illinois woods beginning in the late spring.

The days get longer as the leaves of the calendar turn from February to March to April. Temperatures begin to moderate, sometimes slipping unexpectedly into shirtsleeve territory well before the spring equinox.

And, sometime in mid-February, color begins to return to a brown and gray world. It begins modestly enough with tiny crocus poking through the icy ground. A few weeks later, the hyacinth brave the frosty weather, and then daffodils pop open, removing any doubt spring has arrived.

In the meantime, the woods and grasslands come alive with flecks of color. Through the winter months, there are occasional glimpses of blue jays and the red of woodpeckers, but by and large, grays, browns and blacks are the color of the season.

As the leaves begin to repopulate the trees, the colorful neo-tropical migrants begin to return with their palette of gaudy reds, oranges, blues, yellows and various mixtures of all the above.

“I would say, really it starts in March with some of the birds,” said Don Mullison of Carbondale. “Some of your earliest warblers and things of that nature ... you might get a Louisiana waterthrush kind of early. The parula and pine warblers, they are here fairly and your yellow-throated warbler are here fairly early.

“About mid-March is when some of that starts to happen and it continues to ramp up through April and May. I don’t think it’s any accident the Bird Blitz was set for them. New warblers are coming in through May.”

Mullison has been tracking, observing and photographing birds for decades.

“I started birding, I’m not actually sure, it was long enough ago,” he said. “I was either 14 or 15 when I started. A very good friend of mine, I lived in New Jersey at the time, one day his mother said ‘I think the two of you would enjoy birding.’ She gave us a bird guide. He actually became an ornithologist. For me, it became lifetime hobby. I became a psychologist. I guess I’ve been at it for 50 years or more.”

The spring migration is triggered by a variety of factors, weather and lengthening days included.

“I’ve heard a variety of things,” Mullison said. “My guess is that it is more determined by a combination of light, temperature and food availability. I think a number of birds, as long as they can get food as long as they aren’t freezing, will hang around. It doesn’t do them a lot of good to arrive at a place that doesn’t have food yet.”

When the migrants start arriving, they’re generally easy to spot.

“I would say by the time they arrive, they are pretty much in their breeding clothes,” Mullison said. “There are a few warblers that some time hang around. They hang around during the winter, but even when you’re seeing them in the spring, they’ve got their spring clothes on by then and are significantly more colorful than they are now.”

The newly arrived birds bring color to the forests and the fields. The orange of orioles and bright red of tanagers can be spotted in the tree tops and the blue grosbeaks and indigo buntings will fill the fields — as well as the edge areas in between.

“The grosbeaks and the indigos, we generally start to see them around the time of the blitz (late April),” Mullison said. “A lot of times they’re not here much before that. Your grosbeaks and orioles and tanagers, that’s about the time they start to come in and can be seen. A few weeks prior to that, they’re not really here. Just a few individuals and they are harder to find.”

And, although the gaudy nature of the new arrivals makes them easy to spot, amateur birders can enhance their chances by taking a few simple steps.

“One thing you can do to see some of the birds is to make a little noise,” Mullison said. “What they’ll do, because they are curious, is to pop up for a second. Even the white-crowned sparrow, which we don’t have during the summer, for a sparrow they are quite colorful.”

And, while Southern Illinois is a wildlife wonderland, not all fields and trees are created equal.

“In terms of the blue grosbeaks, there are a few different places I like,” Mullison said. “Crab Orchard isn’t a bad place. They like open areas and edges, the drive there is good. I think another really good place is the Jackson County flood plain. Just drive the levee roads. What’s nice about that is it puts you up in the air, it gives you a nice vantage point and sometimes they will be practically outside your window.

“The levee roads are a good place to find some of those birds. At times depending on water and fish conditions, you can’t expect this all the time, but one day in a couple hours time I saw 101 bald eagles. But, the orchard orioles often can be seen from the levee road. They actually prefer some of the more open areas.”

For forest birds, Mullison suggests Atwood Ridge in Union County, Oakwood Bottoms, and the area around Pomona in Jackson County. And, a few common sense suggestions will enhance your viewing pleasure.

“If you get a woodland area and you’re out fairly in the day, what you want to do is position yourself so you are facing west and sun is behind you,” Mullison said. “As the sun comes up and hits those trees, the warblers will come. And, you’ll have good light to see and photograph them. There are a lot of good places to do that. Oakwood Bottoms, if you get up on the Big Muddy Levee road to the east of Oakwood, as the sun comes up behind you just stop at certain places where the trees are close to the road.

“Whenever you can you want to try to get an edge effect. If you have a woodland abutting an open area or water, you get more activity on that edge. The other advantage to that is you can see them better, whether you’re in an open area of grassland or you’re in a boat.”

The University of Illinois Extension is a familiar agency in our community, and the signs for field offices can be seen throughout Southern Il…

The male Baltimore oriole is perhaps the brightest of the spring migrants. 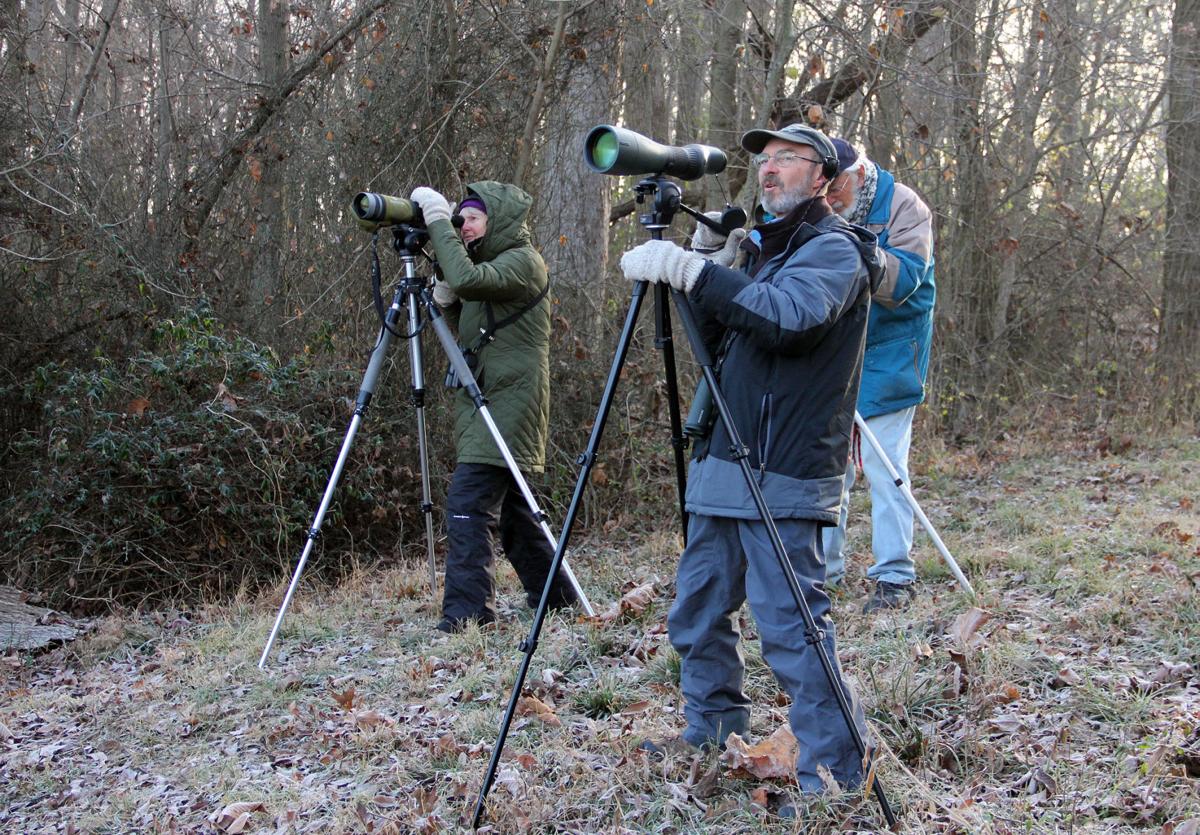 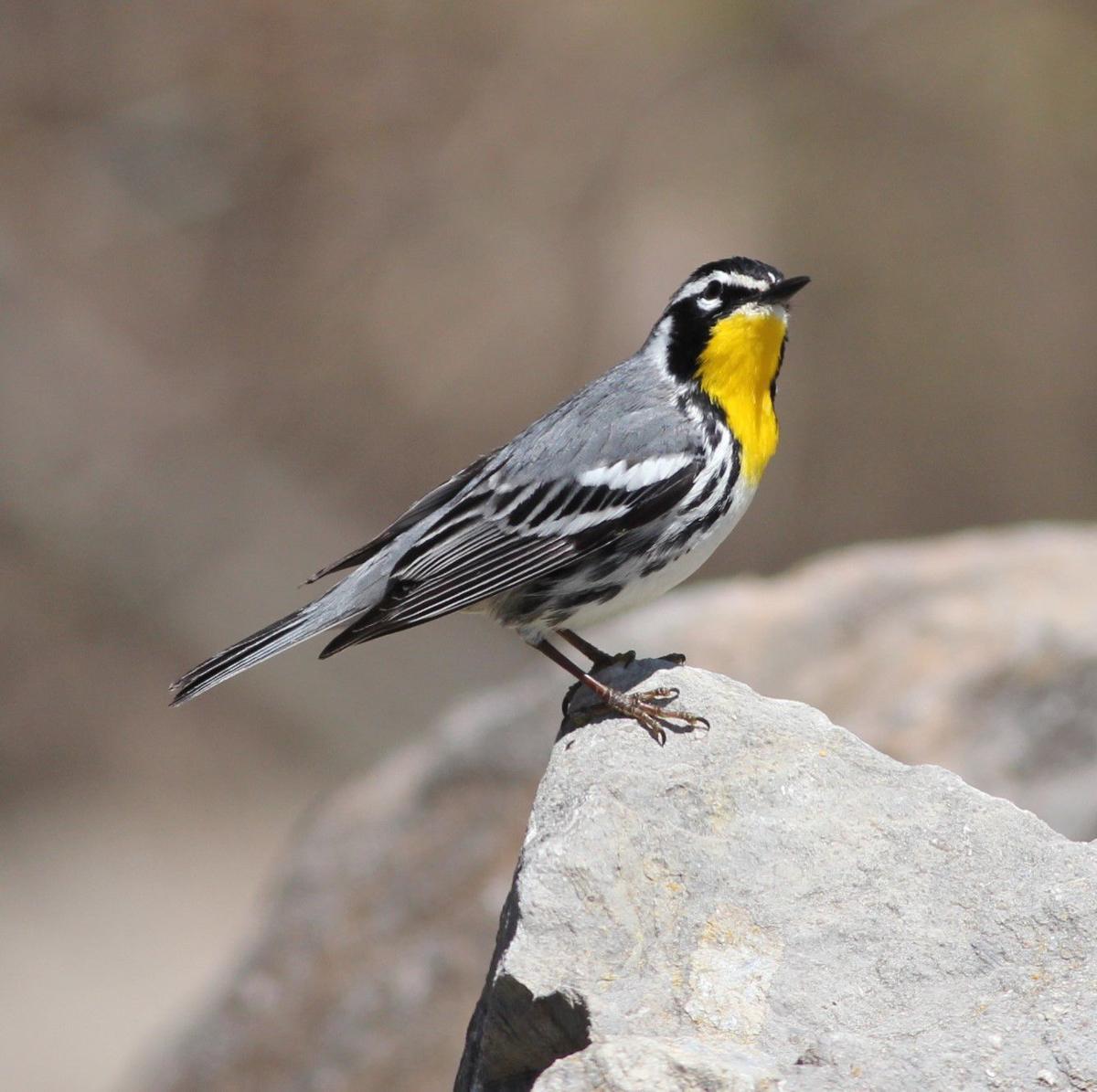 The yellow-throated warbler is one of the first birds to migrate through Southern Illinois in the spring.

The summer tanager adds a dash of color to the Southern Illinois woods beginning in the late spring. 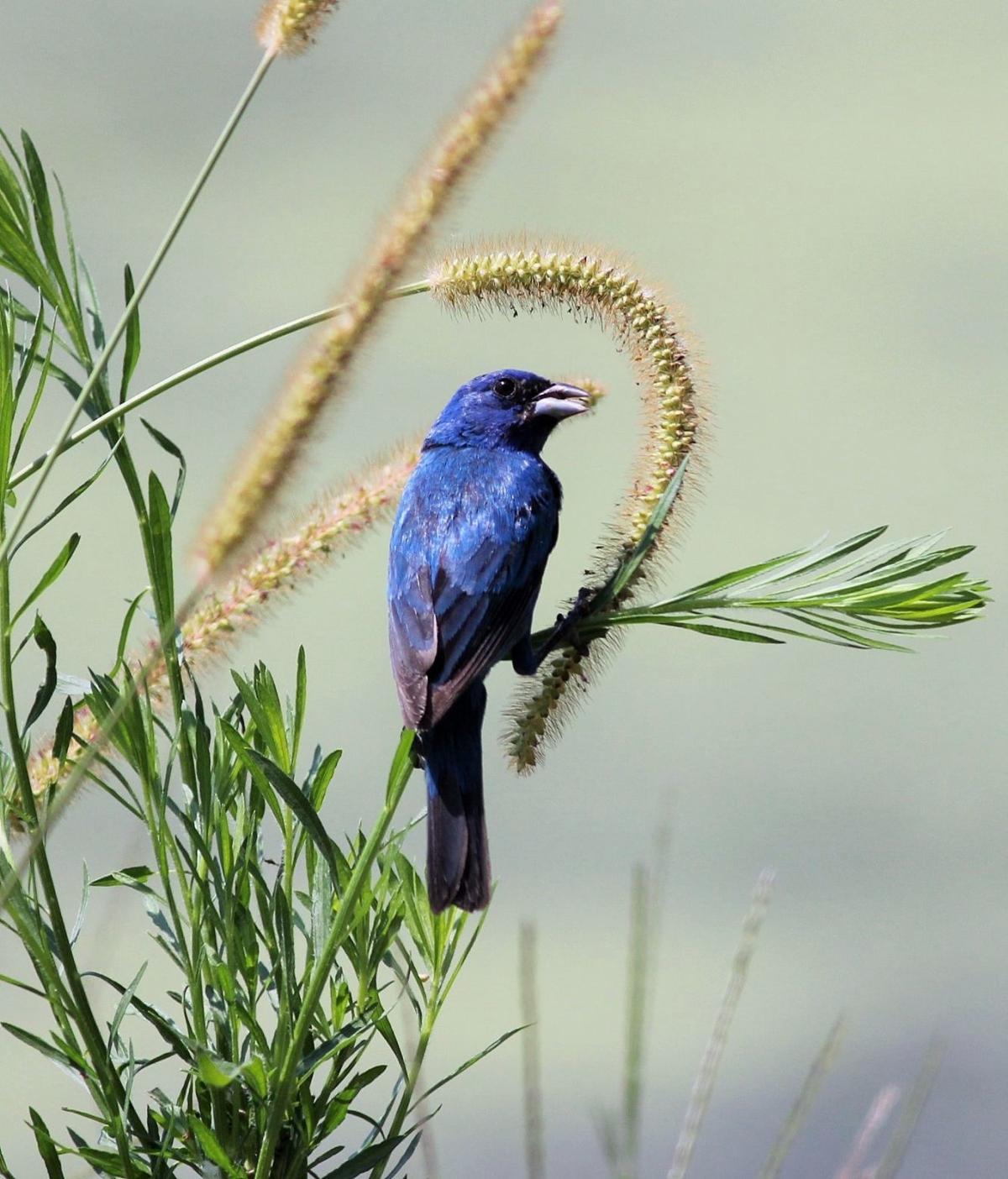 Indigo buntings can be spotted in fields and edge areas as they and other birds migrate through Southern Illinois in the spring. 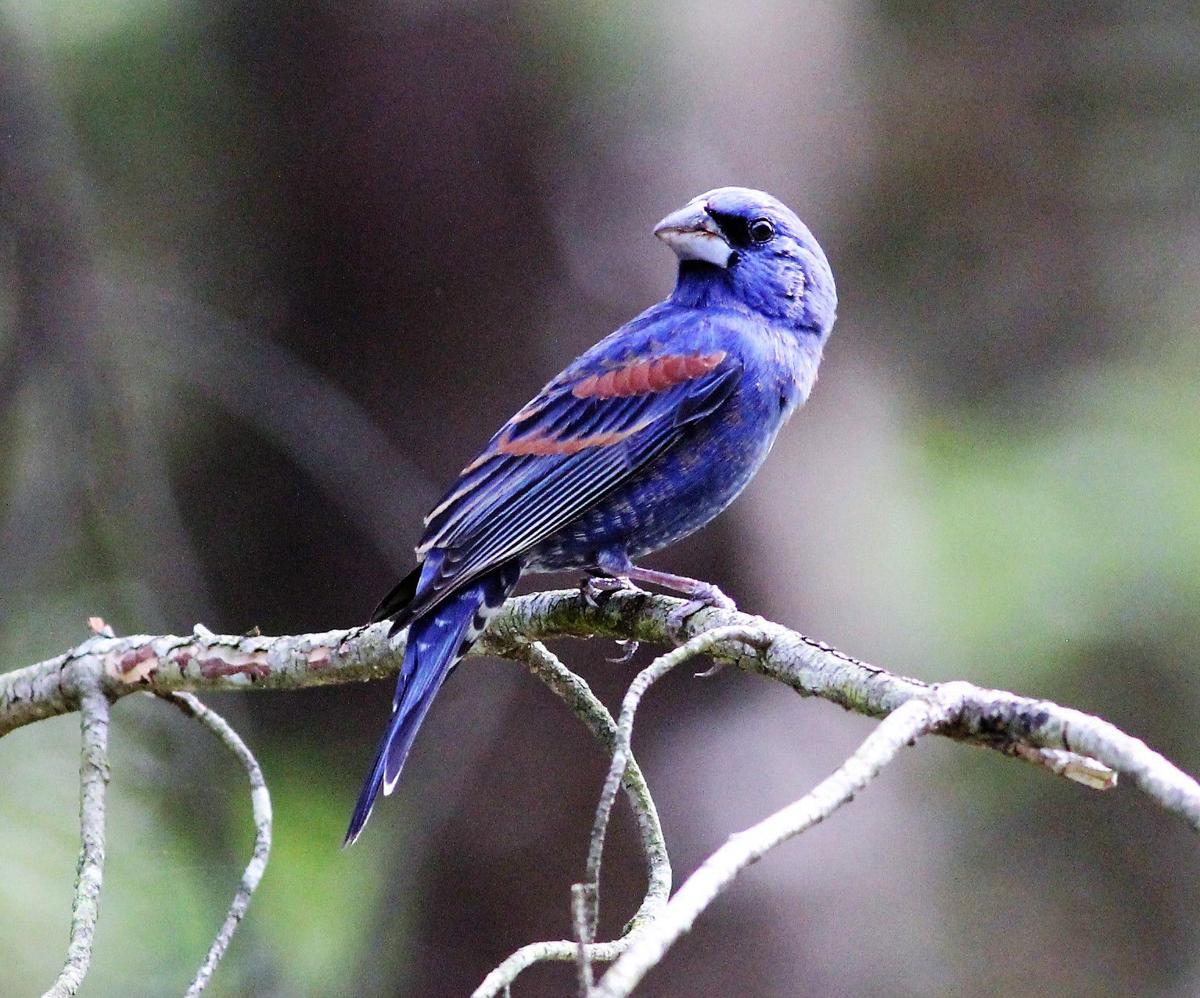 Blue grosbeaks arrive in the spring and can be seen feeding on insects in open fields.