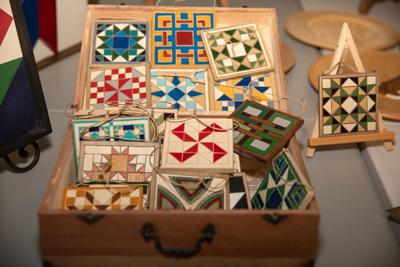 Carl Cottingham’s mother was not impressed with his attempts at quilting. As a youngster, he knew winter was coming when his mother, aunts and friends would rearrange the furniture in the Cottingham’s Hamilton County home to make room for the annual quilting project.

Every year, quilting sessions would be a way to not only create a means of staying warm but also an opportunity for socializing as well as an outlet for creativity. Cottingham often would try to join in, but his mother wouldn’t allow it.

“She never would accept my quilting. She said I made the stitches too big and too irregular,” he recalled.

Surprisingly enough, the 80-year-old Carterville resident has gained attention as a creator of quilts, made not with fabric and stiches, but rather with wooden and paint.

The origins of these works of art known as barn quilts is not completely clear – some trace the beginnings to quilt-like patterns painted on barns in New England in the 19th Century. Many others believe the first barn quilt – a geometric block painted to resemble a section of a quilt – was created in Adams County, Ohio about two decades ago as one woman’s tribute to her grandmother. Regardless, the outdoor adornment has generated a following with more than 7,000 barn quilts included in organized "Barn Quilt Trails,” mapped collections of decorated buildings in a county or region.

Cottingham’s interest in creating barn quilts began about 10 years ago on a trip to Northern Indiana.

After a couple more trips to see the artwork and enrolling in a workshop to learn how the barn quilts were made, Cottingham began creating his own. Today, from his workshop inside The House of Busifingers, a Carterville craft store he owns with his wife Nanette, he makes a variety of barn and wood quilts including small Christmas-ornament sized ones he hand carves and paints to ornate mosaics of reclaimed wood as well as the traditional barn quilts.

Cottingham, who retired in 1996 after serving as dean for learning resources at John A. Logan College, sells his creations in the store, at craft shows across the region and does special commissioned work. Most of the traditional barn quilts are four square feet, decorated with geometric designs and hand-painted with outdoor paint. They retail for less than $75. His largest work to date was nearly eight feet wide and is on display near Malone’s Day Care Center in downtown Carterville. The smaller ones can be found in a variety of settings, both indoors and out.

“Around here we don’t have very many barns, so they put them on houses, sheds and other places,” he said. “I think it’s popular just because of the love of quilts and the simple beauty of it,” he explained. “It’s art. It’s folk art and there’s a sort of charm in the patterns and the colors.”

Each piece is unique and takes Cottingham a few hours to layout, paint and finish, paying close attention to the measurements and pattern. He has started his own workshops a few years, teaching others the techniques and tricks to producing their own barn quilts, always sharing his love of the artform.

Cottingham said he will continue to build and paint barn quilts as long as he is able.

“I just can’t imagine doing anything else,” he said. “Certainly not anything that would be any more fun. Some people have this kind of creative urge and I guess I’m one of those people. It runs in my family. My mother was like that.”

And what would his mother – the woman who wouldn’t let young Cottingham become a quilter – think about his work now?

“I think she would get a kick out of it,” he said. “I guess I am a quilter now, but in a different medium.”

For the first time in two years, the popular John A. Logan College Autumnfest craft and vendor fair is back for 2021, but in a new location.

Five new murals are coming to downtown Carbondale this year and area residents are getting a say as to the design of the large-scale art projects.

When you look at a Sarah Capps painting, you see more than colors on paper. You are drawn into nature, into her life.

SI Pride March and Cruise was organized solely as a Pride Month event, but the event took a little turn after the release of the decision to reverse Roe v. Wade by the U.S. Supreme Court on Friday.

Carbondale is just different — its music, its art, all of it and there’s a resilient spirit that makes it this way.

Southern Illinois history is captured in the art decorating our buildings. Here's a look at murals painted in the area.

Are you ready to retire? Here's how to tell

Watch Now: Medical information to have ready in case of emergency

Watch Now: Medical information to have ready in case of emergency

This is why you keep waking up tired

This is why you keep waking up tired 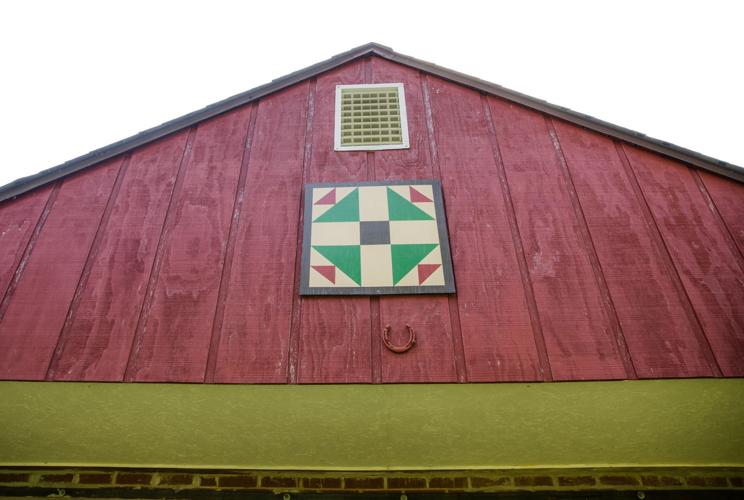 Uncertainty surrounds the history of barn quilts, but one thing is certain: the folk art pieces like this one created by Carterville's Carl Cottingham are popular addition to barns, shed, homes and businesses throughout the Midwest. 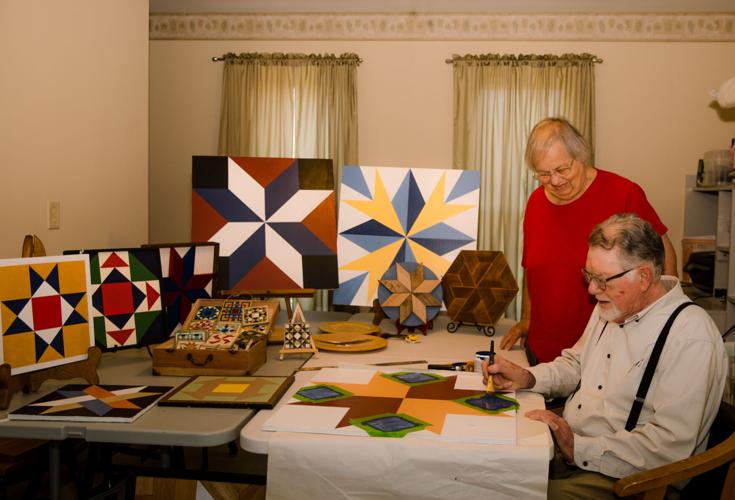 Nanette Cottingham looks on as her husband Carl completes another barn quilt. The couple sells the original works at craft fairs and in their Carterville business, House of Busifingers. 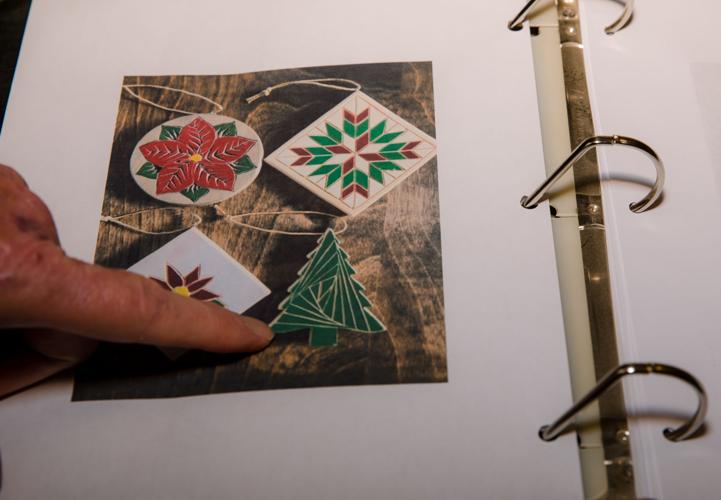 Carl Cottingham points to examples of his barn quilt ornaments in a binder of his work. Like this carved Christmas tree, many of his creations come in unique shapes. 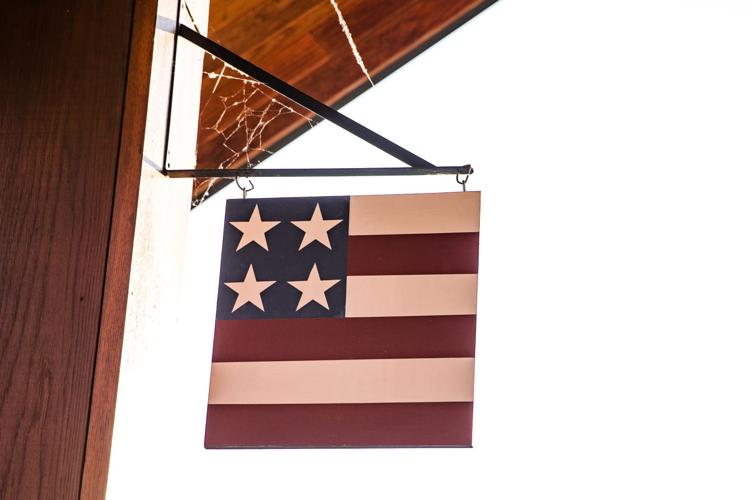 Traditionally, barn quilts like those created by Carl Cottingham have been hung on the sign of barns and outdoor buildings. However, many of the folk art pieces are used indoors and some are finished on both sides to be hung from sign frames. 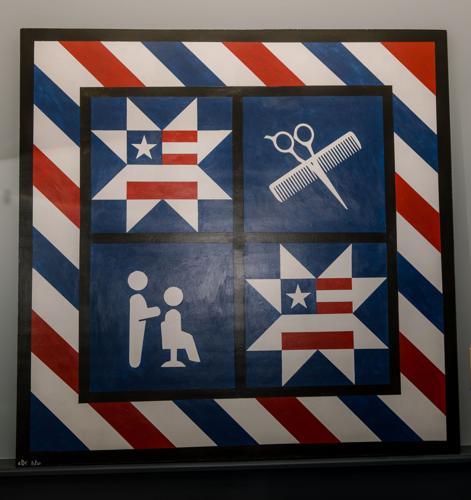 Some of Carl Cottingham of Carterville barn quilts fall into the "non-traditional" category. One example is this custom designed wall hanging for an area hair stylist. 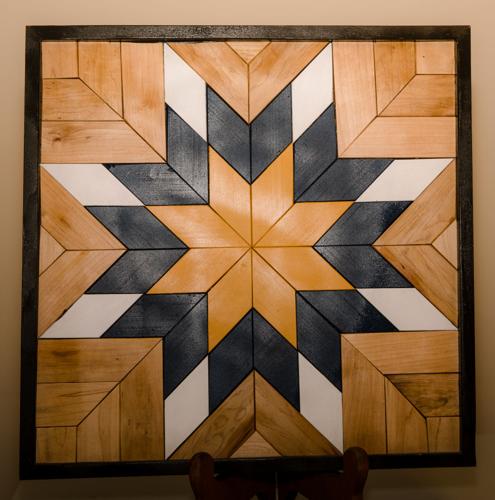 In addition to painted barn quilts, Carterville's Carl Cottingham also makes mosaic quilt patterns like this one. These works of art use reclaimed wood arranged in a traditional quilting pattern. 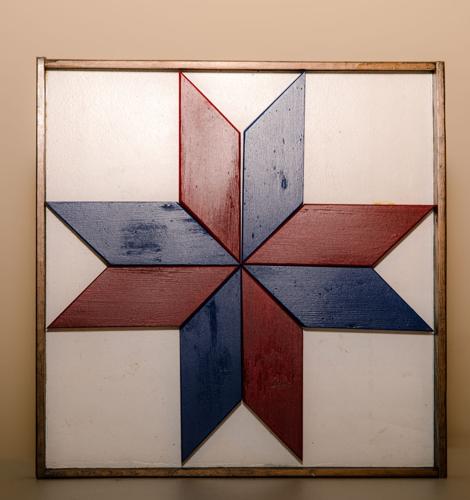 Barn quilts mimic the look of traditional, hand-made fabric quilts and even though they are designed for outdoor uses (like adorning a barn), they are popular art pieces for homes and businesses. 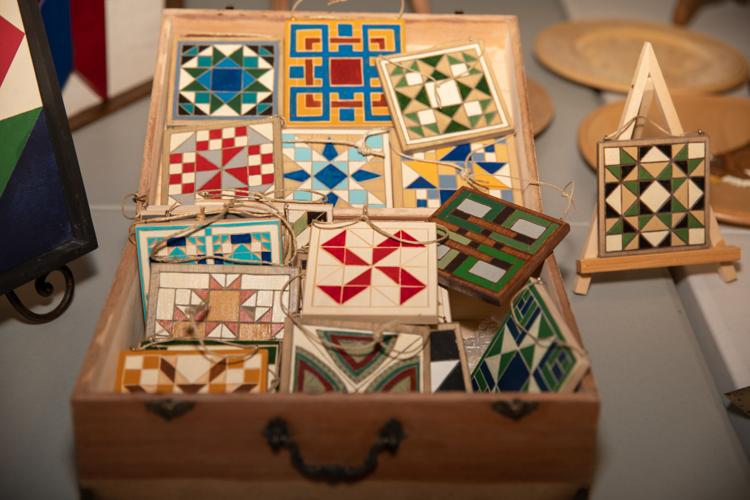 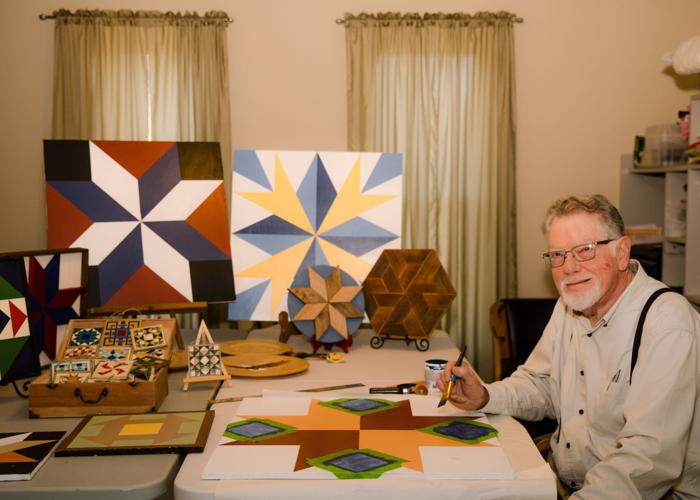 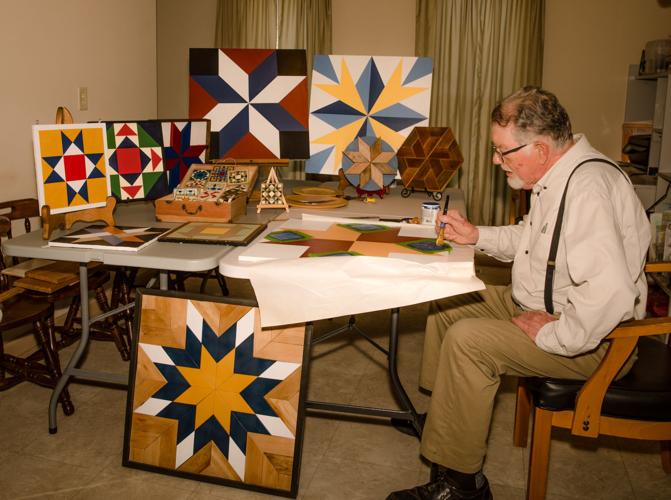 Surrounded by examples of his work, Carterville's Carl Cottingham completes a barn quilt. Cottingham has been creating the folk art -- and teaching others to do the same -- for a number of years.