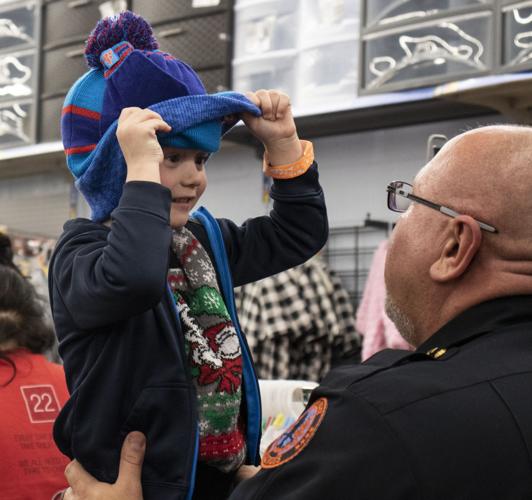 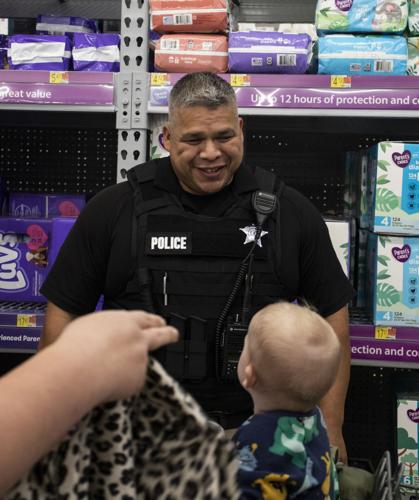 Salvador Tomas, a Herrin police officer, has a riveting conversation with 10-month-old Kinsington while her mother looks for some clothes for her at Cops and Kids, Dec. 8, 2021 in Herrin. 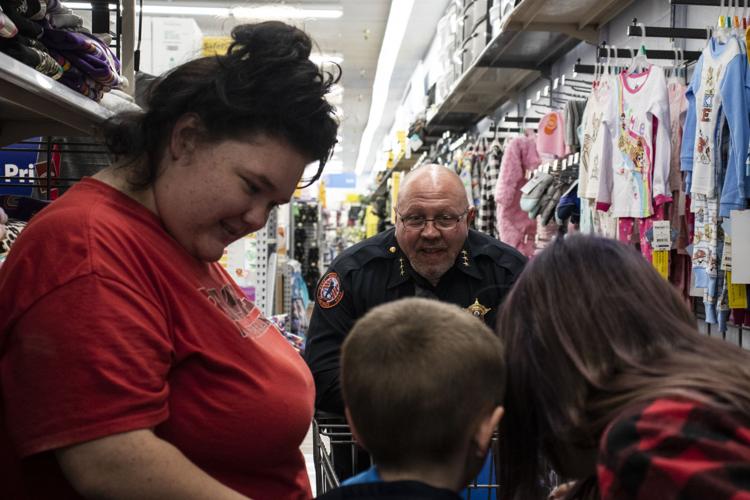 Tad Thompson, deputy chief of the Herrin police, chats with Raylan, 3, and Jetlin, 11, along with their older sister Angie at Cops and Kids on, Dec. 8, 2021 in Herrin.

HERRIN — Police Chief David Dorris said Wednesday that his department is taking over the responsibility of providing a full-time resource officer for the Herrin Unit 4 School District.

Patrolman Keith McPheron was awarded the job through a bidding process. He will work a day shift from approximately 7:30 a.m. through 3:30 p.m., mostly at the high school.

According to Dorris, McPheron will not be stationed permanently at the high school, he will also travel occasionally to the junior high and elementary schools to spend time at those attendance centers.

"It's an honor to be able to place a full-time officer in our school district," Dorris said. "We are part of this community, too. These students are our children, too. We are looking forward to getting to know the kids and working with the school district. And hopefully, in the near future, we will be able to add officers so that we can have each school fully staffed."

Herrin Mayor Steve Frattini said he was pleased that a full-time Herrin cop would be working at the schools rather than part-timers or retired officers.

"We were usually the ones responding anyway whenever there was a problem," Frattini said. "It just makes sense to keep it here in Herrin."

School Superintendent Nathaniel Wilson said he is appreciative of the work done the last few years by a host of resource officers as scheduled by Energy Police Chief Shawn Ladd.

"Of course, we'd like to have more than one full-time officer in our district, but it's a matter of finances that we can't at this time afford more than one," Wilson said. "That's why we're going to try to find other ways to increase the numbers."

In the meanwhile, Wilson said one idea is to hire part-time, adult hall monitors, perhaps some with a background in law enforcement, in an attempt to cover all the schools in the district. Each monitor will be "an extra set of eyes" as Wilson put it to help ensure a safe environment.

Regarding the new partnership with Herrin PD, Wilson said he believes it will be a benefit to the district in many ways.

"They were responding to incidents here all the time even when they didn't have a resource officer working here. In the event of an emergency, they're better equipped to handle things," he said. "Again, I want to stress that the full-time officer will spend time at all our schools, not just the high school."

Wilson said that the district is looking into upgrading its security system, replacing outdated cameras, for example, as finances permit. Wilson added that the district will also request building checks to learn where, if anywhere, that more secure measures need to be made, and especially to make sure that all access points at the schools are secure.

Ladd said he has no problem with Herrin taking over the school resource officer position, but he was proud of the work that his collection of officers had done the last few years, keeping the schools safe.

"I had some seasoned officers, including a few retired state troopers like Phil Jeralds working here on occasion," Ladd said. "I was able to work it out that we had three schools covered for right at $50,000 and we had just finished a four-year contract. Now, the district will pay one officer $70,000.

"But don't get me wrong. I believe Herrin officers should be in the Herrin schools," Ladd said. "Dave (Dorris) and I are friends. He worked for me for 10 years in Energy. We all want the same thing - to protect the kids."

The ride benefits the Illinois Chapter of Concerns of Police Survivors and travels over four day and 350 miles.

Illinois Concerns of Police Survivors rode through Decatur on Friday during their annual four-day bicycle ride to raise money and honor fallen officers lost in the last year.

Anyone who drives on an interstate has seen semis and large commercial trucks parked along ramps. Rep. Mike Bost is too familiar with the stru…

Over $2M in ARPA grants awarded in Williamson County

The Williamson County Board of Commissioners are doling out $2,368,000 in federal ARPA (American Rescue Plan Act) grant monies to 13 different municipalities and agencies within the county.

A suburban Chicago family is requesting criminal charges against an off-duty Chicago police sergeant who they say pinned their 14-year-old son down and pressed a knee to his back because he mistakenly thought the boy was trying to steal his son's bicycle.

Summer of extremes keeps helicopter crews busy across the nation

Salvador Tomas, a Herrin police officer, has a riveting conversation with 10-month-old Kinsington while her mother looks for some clothes for her at Cops and Kids, Dec. 8, 2021 in Herrin.

Tad Thompson, deputy chief of the Herrin police, chats with Raylan, 3, and Jetlin, 11, along with their older sister Angie at Cops and Kids on, Dec. 8, 2021 in Herrin.