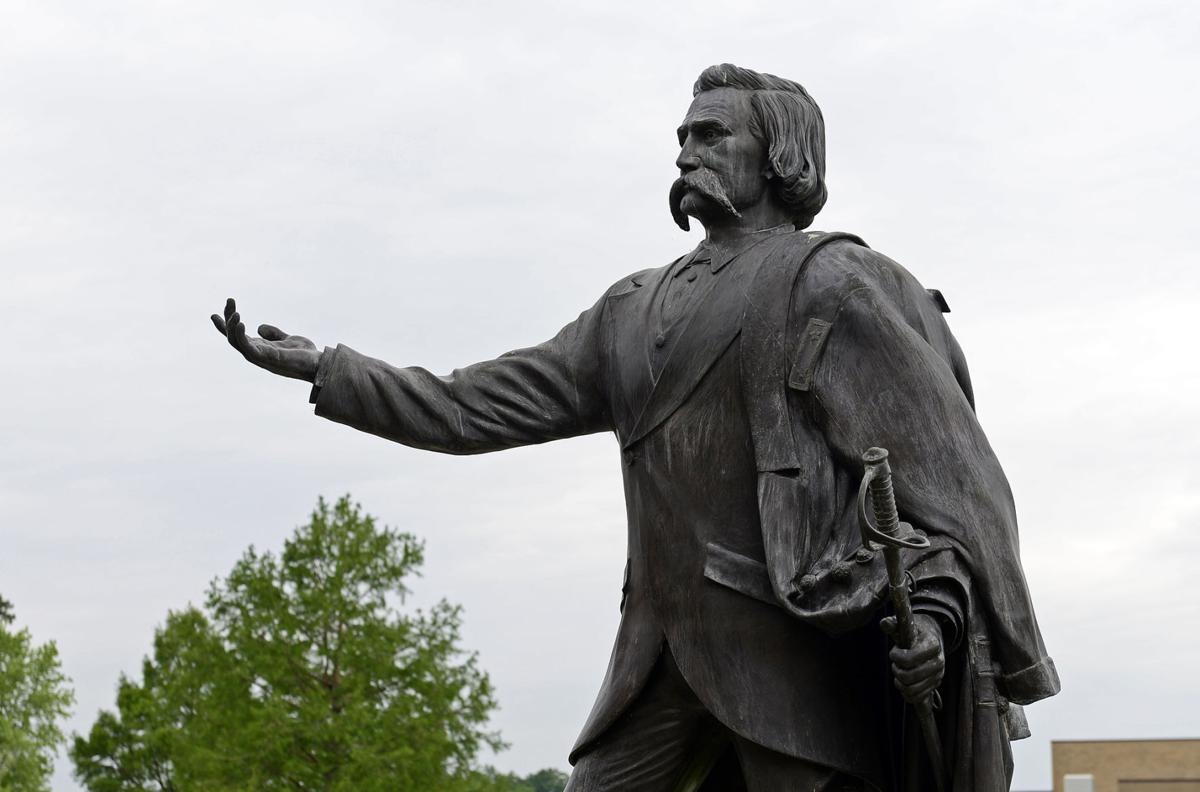 A statue of John A. Logan stands in a courtyard of the college bearing his name in Carterville. Read more about Logan's legacy on page --. 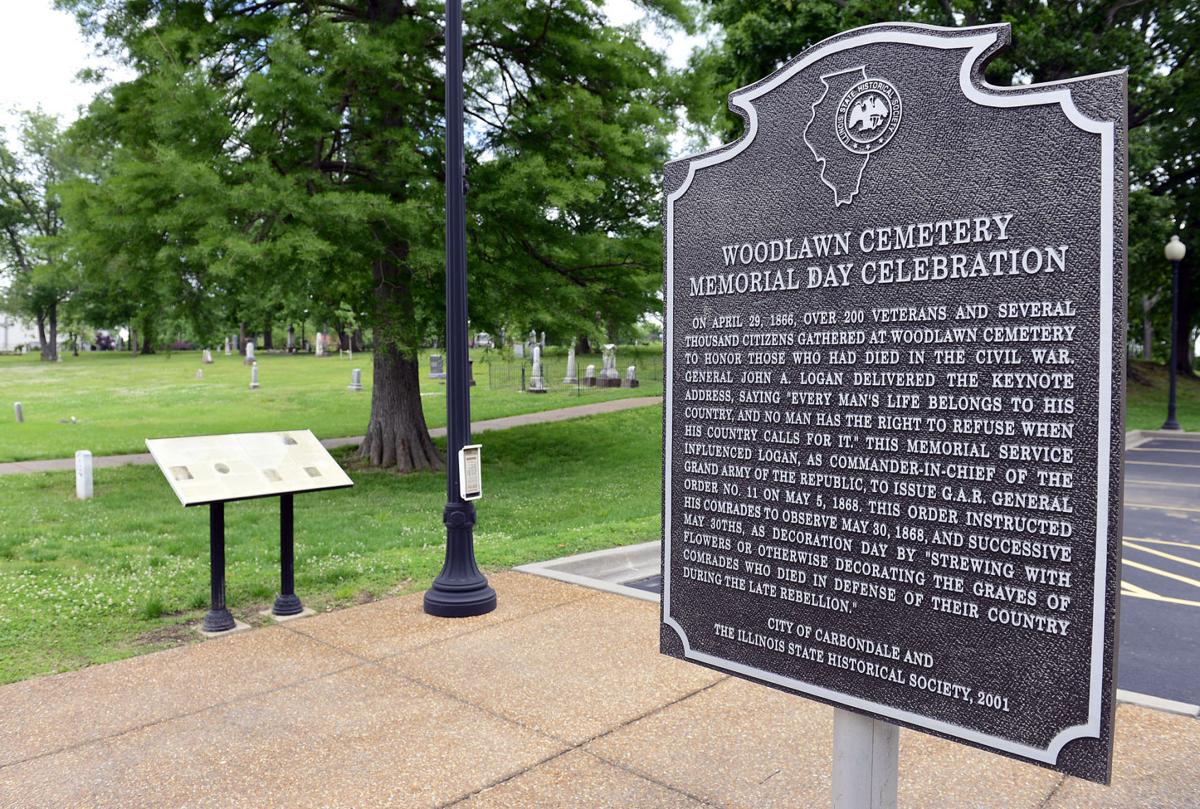 The plaque at Woodlawn Cemetery in Carbondale commemorating a memorial observance for fallen soldiers of the Civil War on April 29, 1866, at the cemetery and a speech given by Gen. John A. Logan that day. 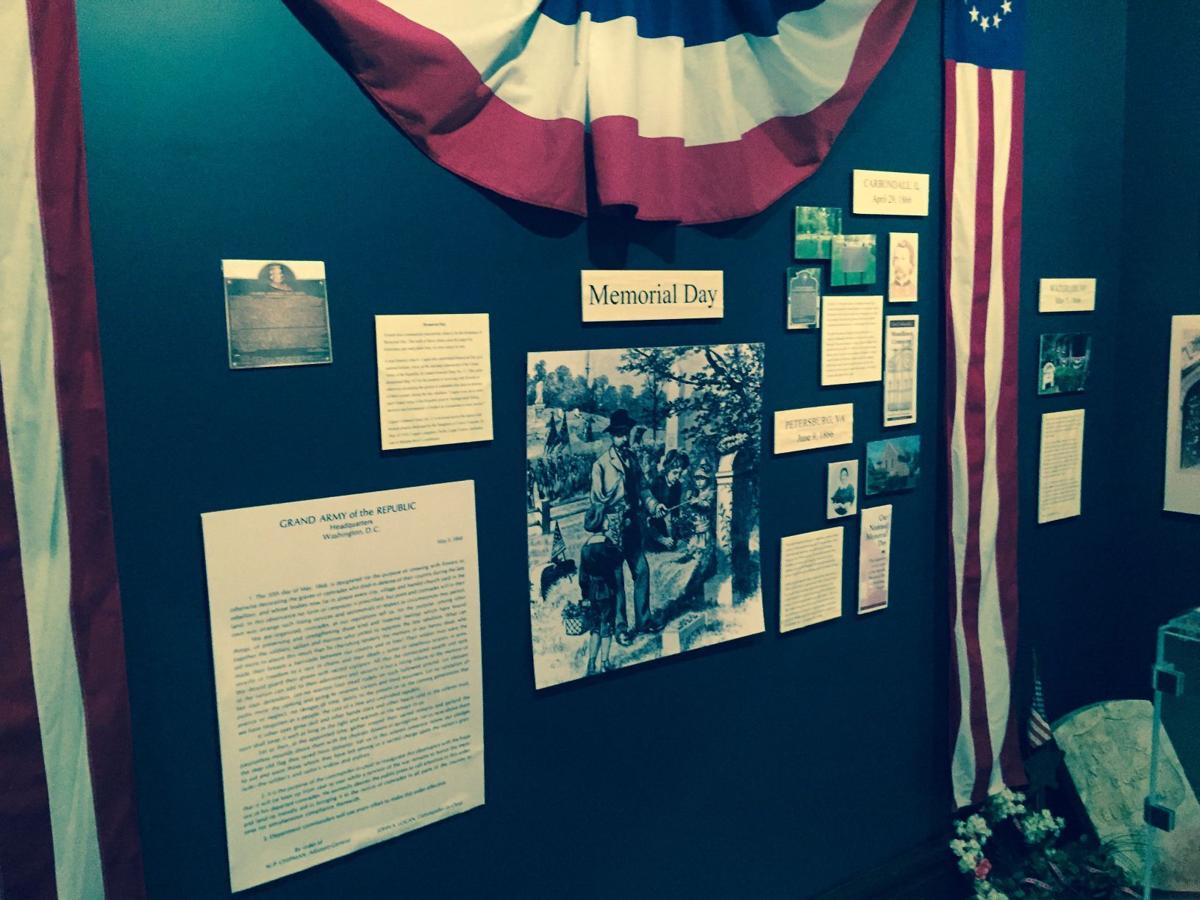 A Memorial Day day display is pictured at the John A. Logan Museum in Murphysboro. 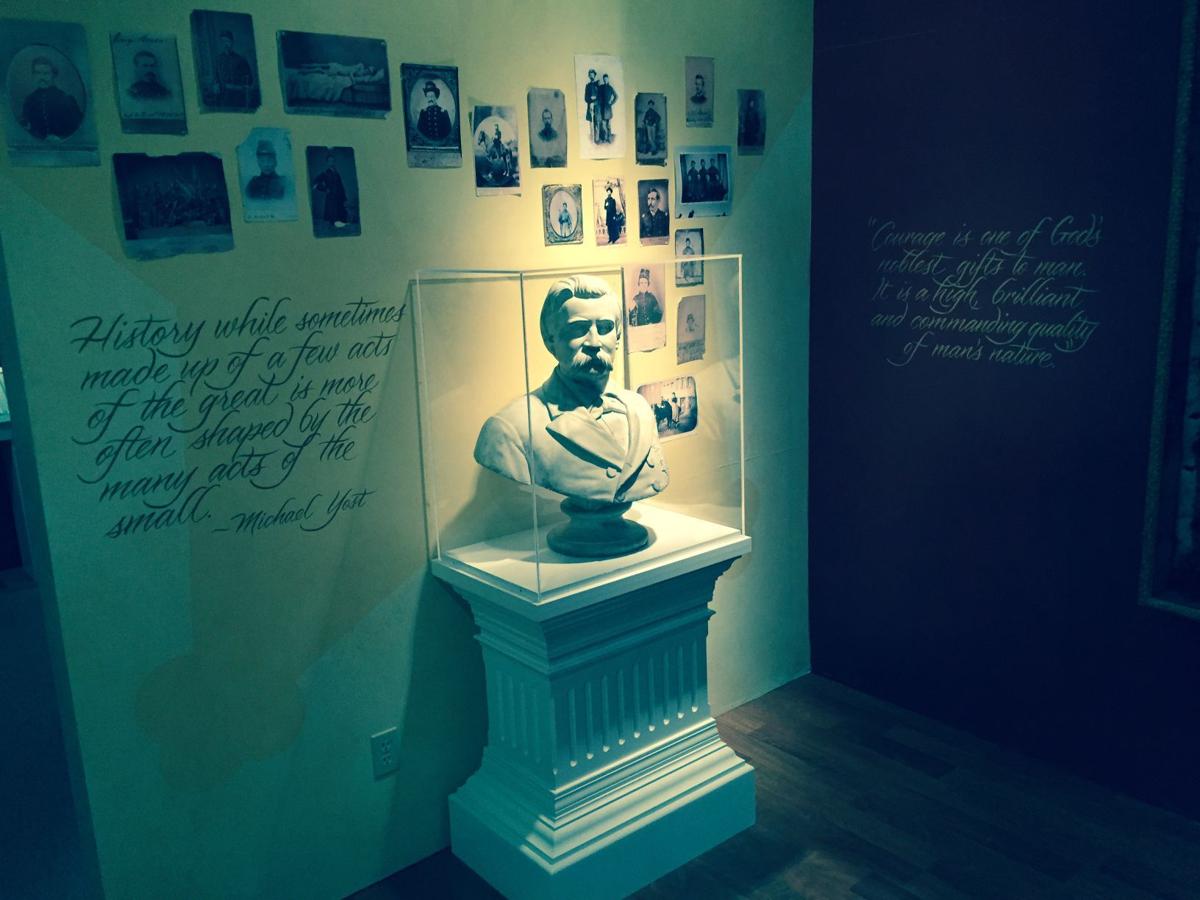 Memorial Day may be one of Americans' favorite holidays.

It’s the unofficial start of the summer season, so there’s cookouts and barbecues all over the country.

But, it’s also a time of reflection. It’s a time to remember those who have fallen while serving in the armed forces.

Memorial Day weekend — May 22 through 25

The start of the holiday is a story in itself.

“It’s a very complicated story,” said P. Michael Jones, executive director of the John A. Logan Museum, in Murphysboro, “and kind of a contentious one, too.”

The first Memorial Day — or Decoration Day, as it was known then — celebrations came in 1866, a year after the Civil War ended. They were held mainly in the South.

“People all over the country were mourning the loss of over 620,000 of their relatives and friends after the Civil War,” said Daniel Bellware, author of “The Genesis of the Memorial Day Holiday in America,” in an email. “Throughout the South, where most of the battles took place, fallen soldiers were being dug up from haphazard battlefield burials and re-interred in orderly cemeteries or shipped home for reburial. Almost everyone knew someone who had died in the war. People were looking for an appropriate way to remember or memorialize their loved ones.

“The South was devastated economically, so picking flowers and setting aside a specific day was probably one of the most cost-effective ways to do that memorializing.”

That’s just not the case — not exactly, at least.

What Logan did was issue General Order No. 11 while he was Commander in Chief of the Grand Army of the Republic.

General Order No. 11, in part, states, “The 30th day of May, 1868, is designated for the purpose of strewing with flowers or otherwise decorating the graves of comrades who died in defense of their country during the late rebellion, and whose bodies now lie in almost every city, village, and hamlet churchyard in the land. In this observance, no form or ceremony is prescribed, but posts and comrades will in their own way arrange such fitting services and testimonials of respect as circumstances may permit.”

The order essentially established Memorial Day as a national holiday.

“His role was critical,” Bellware said of Logan. “There was a lot debate about whether or not northerners should be imitating this Southern practice. Some thought it was keeping old wounds open. Others saw it as a sign of reconciliation as the ladies in several southern cities decorated both Union and Confederate graves. As the Commander in Chief of the Grand Army of the Republic, a Union veteran's organization, Logan legitimized the tribute in the north. His order made the holiday truly national.”

Logan’s wife, Mary, also helped to come up with the idea for the holiday.

According to Jones, Mary Logan was visiting the Civil War battlefields in Petersburg, Virginia, and came across the faded flags that had been placed on graves.

“In fact, this is a story in the Logan family. He didn’t really conceive of it — she did,” Jones said.

Regardless, Logan had a big hand in the holiday.

“It was the proudest act of my life,” Logan said, according to Gary Ecelbarger’s book, “Black Jack Logan: An Extraordinary Life in Peace and War.”

“The origin of Memorial Day started in the South,” Jones said.

Bellware said that in 1866, The Soldiers' Aid Society, in Columbus, Georgia, disbanded and reformed into the Ladies Memorial Association. They wanted to find a way to honor the memory of their dead soldiers with their limited resources.

“Mrs. Charles J. Williams, secretary of the LMA, wrote a letter to her local newspapers, published March 11, 1866, that asked the ladies of the South to come together and decorate the graves of the Confederate dead,” Bellware said. “She also sent letters to other like-minded ladies groups across the South who created LMAs of their own.”

The story was picked up by newspapers across the South, as well as the north, proving the idea was popular and was observed over a wide area.

“The ladies of Columbus have decorated the graves on or about April 26 every year since 1866,” Bellware said.

In the north, it gets a little more complicated.

“Boalsburg was actually earlier than Waterloo and the three northern holidays, but there’s no good primary sources that (state that).”

In Woodlawn Cemetery, in Carbondale, there’s a plaque commemorating a memorial observance for fallen soldiers of the Civil War on April 29, 1866, and a speech given by Gen. John A. Logan that day.

An article from The Daily (Carbondale) Free Press from May 29, 1931, says that historians from the Carbondale State Teachers’ College (now SIU) found scribblings that proved the first Memorial Day in the north was indeed in Carbondale.

“Notes scribbled in the Bible, which is now the property of John Williams of Carbondale, a distant relative of the famous Chief of the Grand Army of the Republic reveals the fist memorial services north of the Mason and Dixon line were held here on the last Sunday of April 1866,” the article states.

It continues, “Notations taken from the Bible reveal that Capt. E.J. Ingersoll presided at the services while the addresses were delivered by General Logan and Rev. L.Y. Layn, a Methodist preacher."

However, those scribblings, according to Jones and Bellware, were destroyed in a fire.

“What little evidence that did exist (handwritten notes, found in 1930) was subsequently destroyed by fire,” Bellware said. “It is noteworthy that if there was a decoration at Woodlawn, it happened three days after the main southern one (April 29 vs. April 26, 1866) and the participants would have likely heard about the large decoration that took place in Memphis, Tennessee, that was reported in the St. Louis and Memphis papers.”

Throughout the years, the days and dates for Memorial Day have changed.

It started on a Sunday, but is now observed on the last Monday during the month of May.

“The May 30 date was prescribed by General Order No. 11. It became the last Monday in May in 1971 by legislation (National Holiday Act of 1971),” Bellware said. “April 26 was the most widely used date in the South, chosen as it was the anniversary of General Joseph E. Johnston's surrender that ended the war east of the Mississippi. Northerners preferred the May 30 date as more flowers would be available at those latitudes.”

One thing that hasn’t changed over the years is the reason for holiday — to remember those lost serving our country.

“The holiday we celebrate today is the holiday that Logan established in 1868,” Jones said.

'The Genesis of the Memorial Day Holiday in America' by Daniel Bellware and Dr. Richard Gardiner is available locally at the John A. Logan Museum or online at Amazon.com.

Tom English is the executive editor of The Southern.

MURPHYSBORO -- Facebook was abuzz Thursday afternoon with the news. The House unanimously supported HR0207 and named Murphysboro as the BBQ Ca…

CARBONDALE — The previous weekend was a time to relax with family, friends and maybe have a cookout or two, but the overall message of Memoria…

Memorial Day weekend — May 24 through 25

Memorial Day weekend — Today and May 25

A statue of John A. Logan stands in a courtyard of the college bearing his name in Carterville. Read more about Logan's legacy on page --.

The plaque at Woodlawn Cemetery in Carbondale commemorating a memorial observance for fallen soldiers of the Civil War on April 29, 1866, at the cemetery and a speech given by Gen. John A. Logan that day.

A Memorial Day day display is pictured at the John A. Logan Museum in Murphysboro. 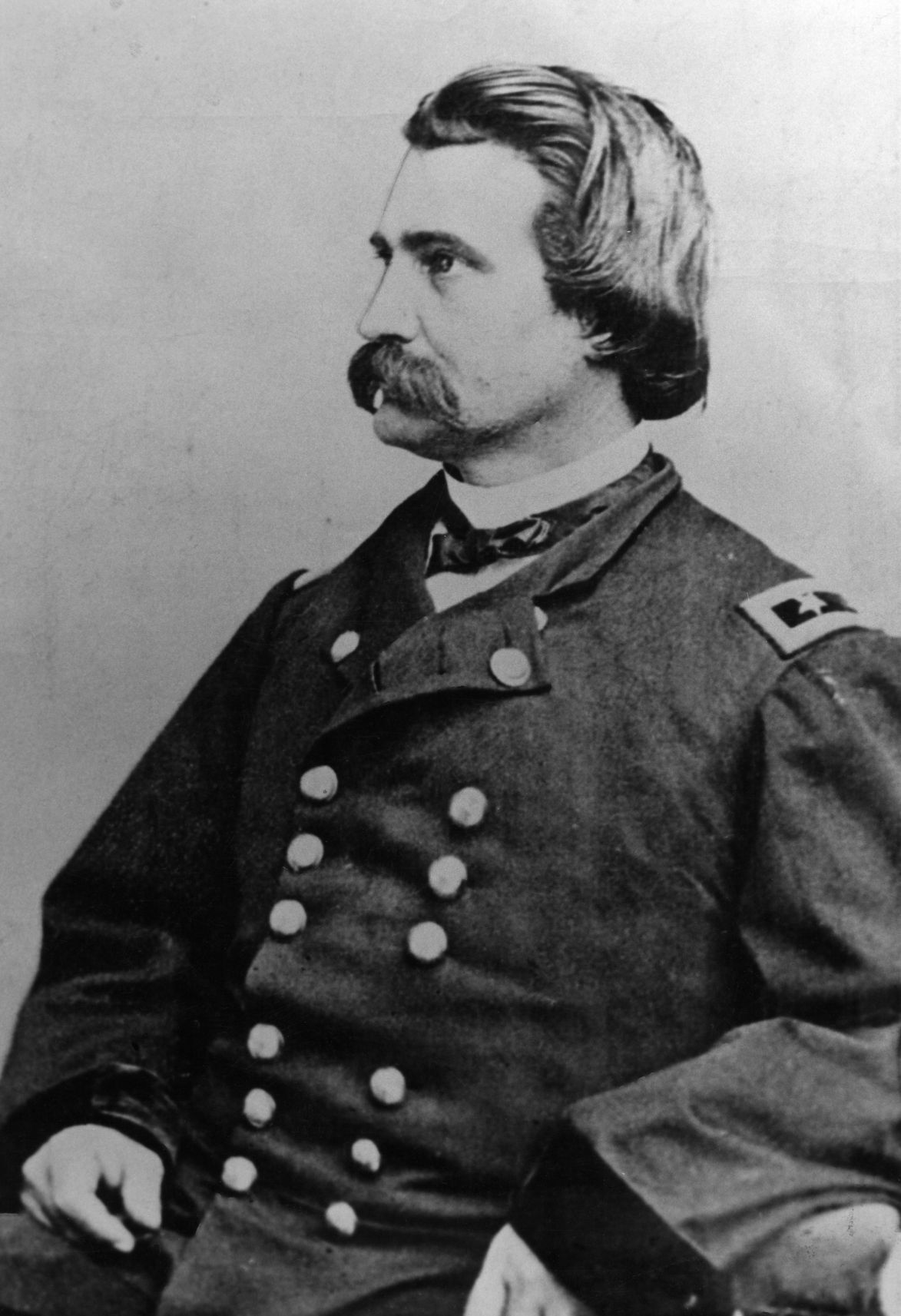