A simple life: Taking a look inside the Amish community in Ava
2 comments
Share this
{{featured_button_text}}
1 of 2 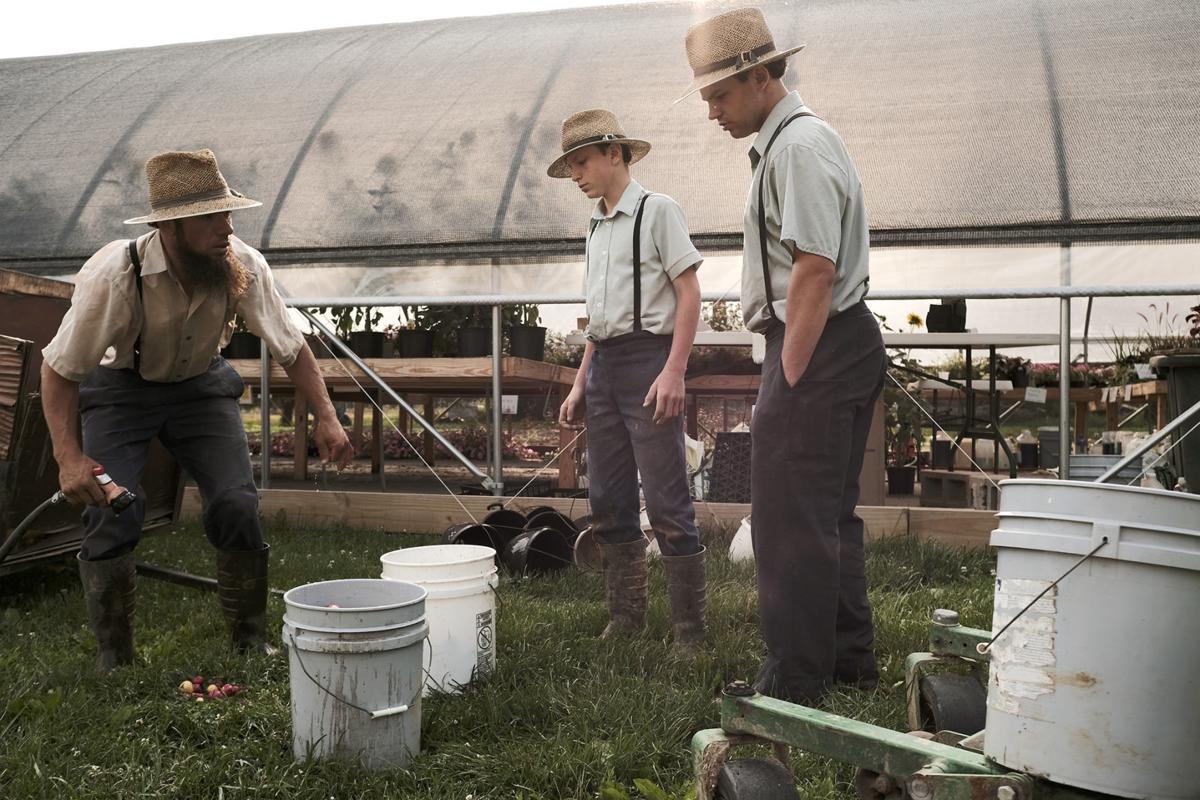 Reuben Mast, left, works with his children Jonathon, middle, and David June 30 on their farm in Ava. 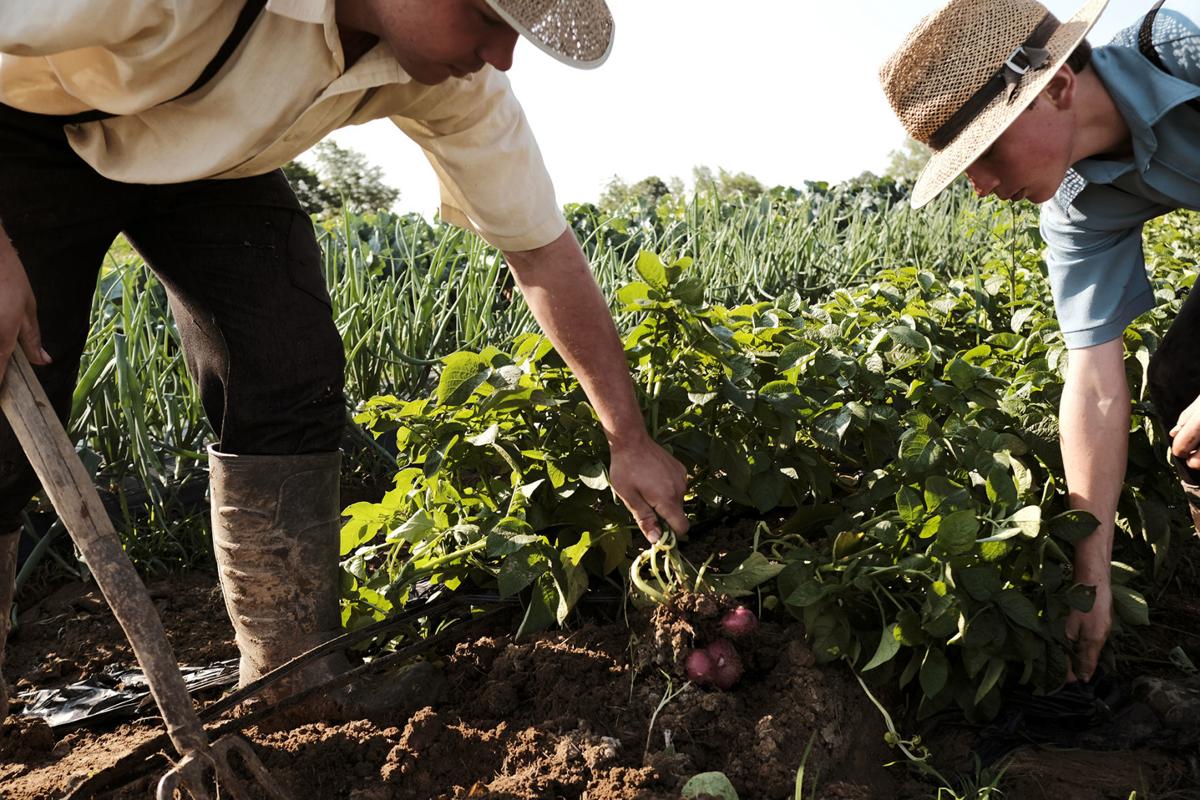 Brothers David Mast, left, and Jonathon Mast dig new potatoes May 31 at their family's farm in Ava. Isaac Smith spent days with the Amish Mast family, learning about their faith and their daily lives.

AVA — The sun shines and a slight breeze cuts across the hill where Reuben Mast’s farm sits in Ava.

In the distance is the hum of a tractor — the crackle of gravel pops underfoot as 5-year-old Jason Mast takes a bucket of table scraps to the compost pile near the horse barn. His bare feet show no signs of aches from the sharp rock.

The last of the morning light illuminates laundry floating on the line near the family’s stone house — white button-down shirts next to long dresses in colors all sharing a common modesty.

For some, the hour would call for the morning’s first cup of coffee and the slow rolling of the beginning of the day. But the Masts have long been up.

The day began with breakfast and a morning devotional as a family — Reuben, his wife, Wilma, and their 10 children.

“We need to be done with breakfast and devotionals before 7:30 (a.m.) so the boys can get to work,” Mast said.

These two elements — family and a strong respect for the institution of faith — come to represent much for the reserved Amish family in Ava. But as Mast explained, there’s a lot more to his family and his community. Their lives comprise more than a bundle of stereotypes and caricatures, though they aren’t going out of their way to correct anyone.

The Masts are known for produce — a big wagon decorated with brightly-colored petunias announces their greenhouse and produce stand off of Illinois 4. Customers pull in to the farm throughout the day to squeeze tomatoes and smell cantaloupe that are often still warm from the sun.

For many, coming into the community seeing the horses, the produce, the baked goods, the dress from years gone by represent a quaint, precious way of life. Assumptions abound — there is no electricity, no phones, no taxes and wild youth.

But almost none of these things apply in Ava.

The Amish faith stems from the Christian Anabaptist tradition whose core tenant is that a person must be old enough to choose to make a confession of faith before being baptized as a church member. Anabaptist denominations tend to take seriously the Sermon on the Mount found in the Bible’s Gospel of Matthew where Jesus preached a message of taking no oaths and not participating in the military or in governments, and this has informed many of the Amish traditions today. However, Mast said they are also careful to consider the intended meaning behind the parables Jesus told.

“We take it in a spiritual sense applied to our life,” he said.

In Illinois and throughout the country, the Amish live in insular communities, which can lead to speculation from the outside world, the world they try to eschew as much as possible. But Mast, who spoke only for his family and his experience in the Ava community, said there is a lot of nuance to the faith and to those practicing it.

The belief, for example, that Amish don’t use electricity because it is deemed a sin by God misses the mark, he said. Mast explained that, traditionally, homes would be powered by gas generators or lit with oil lamps. But some communities, like the one in Ava, do not turn away from attaching themselves to the grid — and it’s about cost. Electricity is cheaper than gas and with it comes a freedom from things like the need to clean mold constantly in the summer, one of the pitfalls of not having air conditioning.

But, there are temptations that come with having electricity Mast said, and this is something those who choose to have it must keep in mind. He said, for example, that it would be very easy to plug in an electric radio and connect oneself to the “English” world.

Mast told The Southern that much of their way of life comes down to avoiding such temptation. Their abstinence from things like cars and worldly music is not because of its outright sinfulness, but rather an attempt to protect themselves from falling off of what they see as their mandate from God to live a simple life.

Not an evangelical people, Mast said the church is open to outsiders converting but he admitted that this could pose an incredible hardship.

“It’s not impossible,” Mast said. “It takes a lot of giving up, I would say, or a changing of thought pattern.”

Mast said the differences between Amish communities and the outside world were not that great just a few generations ago. But, as time has gone on, the world has sped up and the Amish have tried their best not to. He knows this sets him and his family apart, but said this is kind of the point. He said it is his church’s belief that they are called to be a “peculiar people.”

“It would be easier to blend with the world,” he said.

While prayer and communication with God are huge parts of the Amish faith, Reuben said this isn’t a blind faith.

“You can’t sit on the porch and pray that the Lord will take care of the weeds in the field,” he said. Indeed there is very little idle about the Mast family — the casualness many might have in working through their chores doesn’t appear to be there for them.

When Mast asks his children to get a box for produce, the request is met with a sprint. The same goes for him. Mast runs from job to job — time is not wasted.

This idea of trusting in God but using the skills he gave them goes for farming as well as personal health. Hard work and knowledge are the gifts given by God and should be used to work through problems. Mast said trips to the doctor are limited — but if it’s needed, then they go. However, they do not have insurance, but instead each family in the church community are taken care of by the others.

“It’s not insurance, but it’s a coverage,” Mast said.

Possibly the biggest misconception Mast could think of about his community — it was the first thing to his mind when asked about it — was about Rumspringa. This is traditionally the time of choosing to join the faith for Amish youth. However, in popular culture, this had led to images of rampant sex and drug use, as well as adopting other worldly ways. It is also widely believed that these are accepted by the parents.

Mast said this is decidedly false.

“Why would we want to expose our children to fire and hope they don’t get burned,” he said.

Mast said he was not implying some youth don’t experiment with any or all of these things, but said it’s not the norm and neither is parents going along with it.

The Masts and their Amish brethren live together, isolated, but a part of the greater Southern Illinois community. Reuben and Wilma enjoy their customers and get to know many of them — Reuben once even seemed to chastise himself for not remembering one woman’s name, knowing that she had been a regular.

However, not everyone has been accepting of the Amish.

For some this was the horse manure on the roads. For others he said it was just seeing someone different.

“Some of the people just weren’t too fond of having Amish people here,” Mast said.

There are still some who are not as accepting — the slow-moving vehicles and questions about a balance of enforcing child restraint laws cause some to be resentful.

But this has not deterred Mast or the others in his faith community though.

“I wouldn’t say that it’s hard to interact with the outside people,” Mast said.

When he reflected on how the Amish community fit in or saw their role in greater Southern Illinois, he had a hard time putting it into words. He said that they do make friends with people outside of the church.

“We feel connection to our non-Amish friends,” he said. However he said when the surrounding towns have homecomings or schools have open house functions, “we don’t feel we need to be there.”

He said theirs is a different way of viewing the world but recognized that they were indeed part of the world.

“Just because we dress different … that shouldn’t really make it so we can’t get along with people,” Mast said.

Our favorite images of life in Southern Illinois from 2019

Our favorite images of life in Southern Illinois from 2019

Reuben Mast, left, works with his children Jonathon, middle, and David June 30 on their farm in Ava. 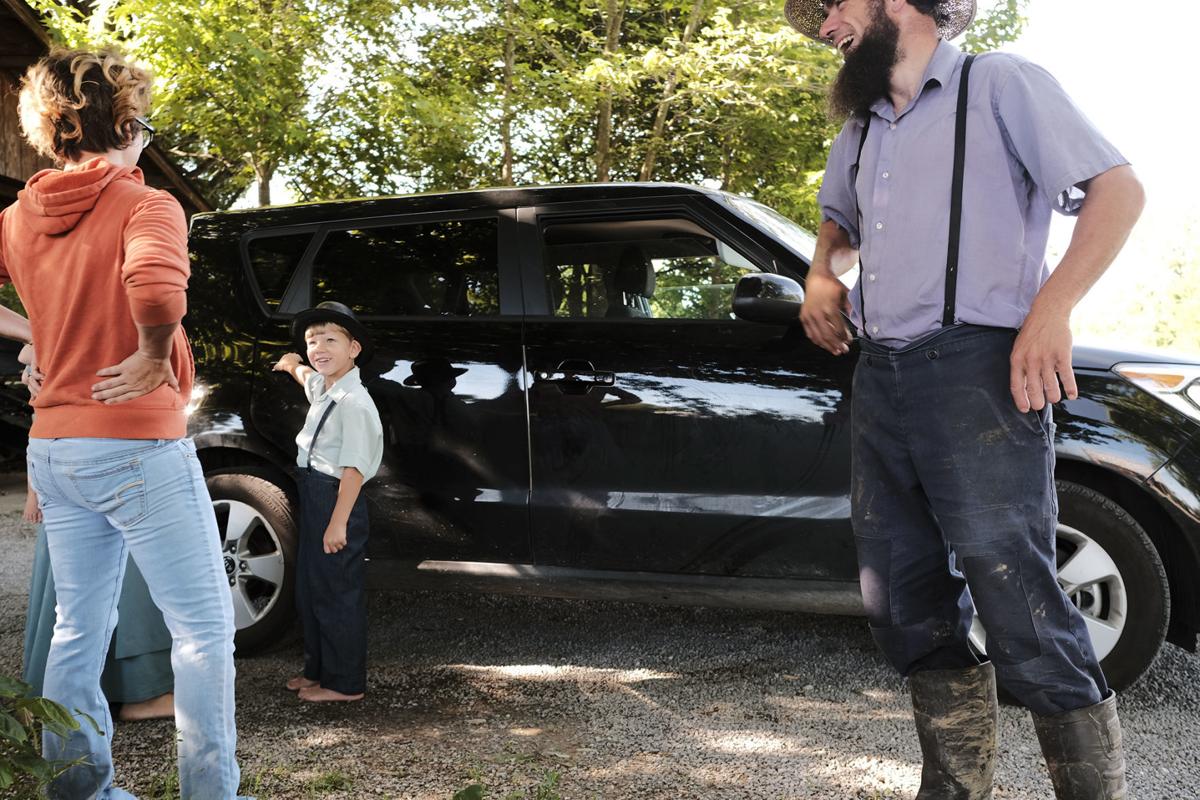 Reuben Mast, right, and his son Jason Mast greet a customer June 25 at their farm in Ava. 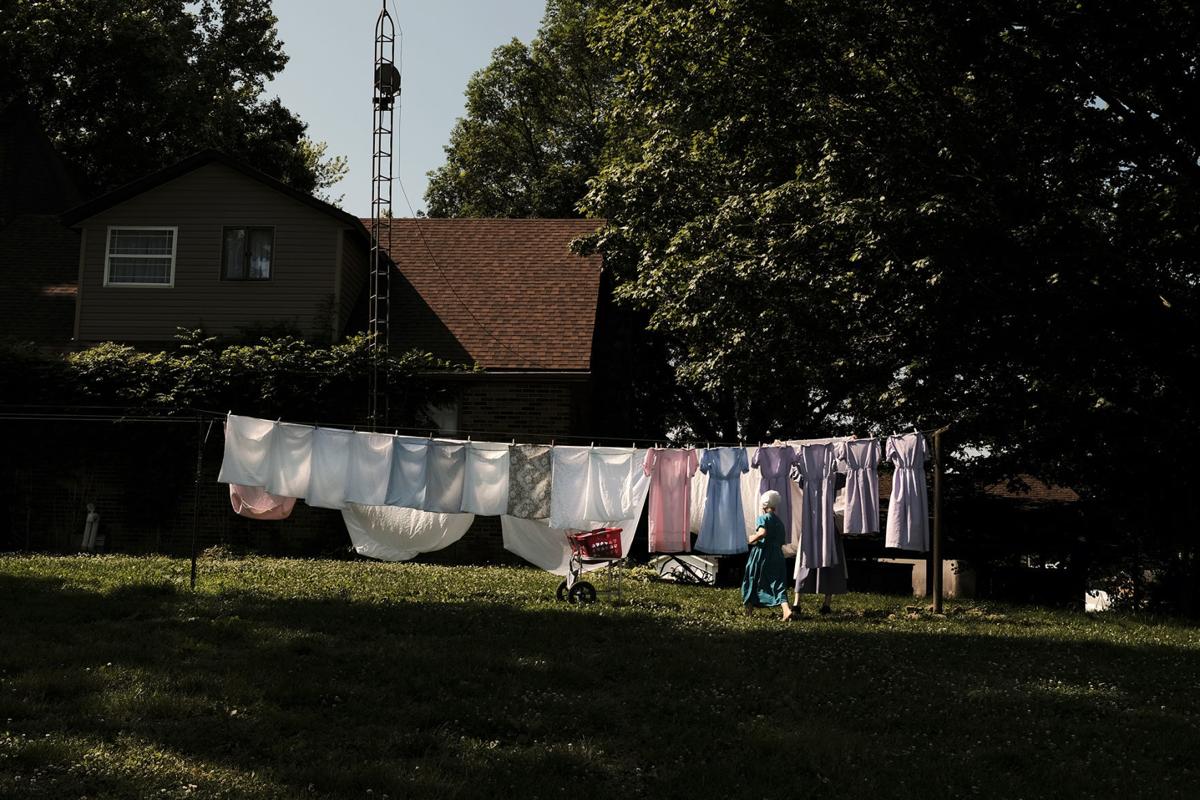 Laundry on the line May 31 at the Mast home and farm in Ava. 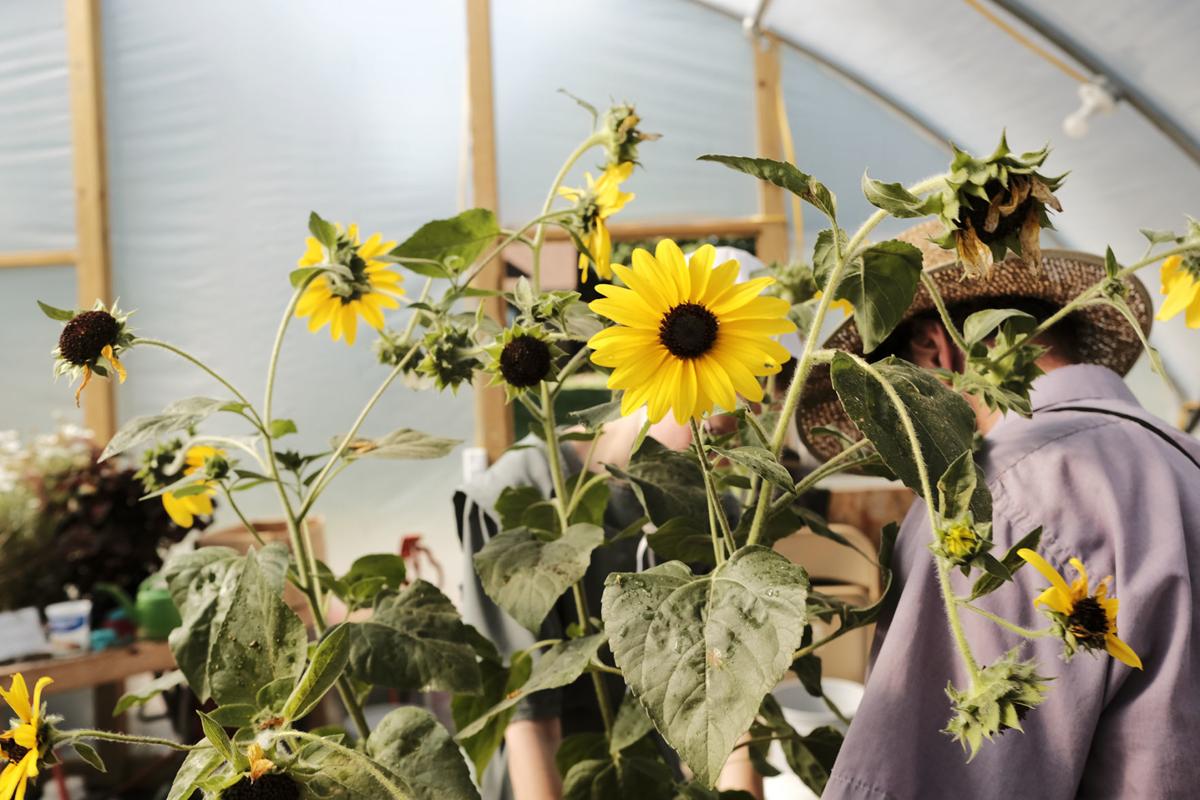 Flowers inside the Mast greenhouse June 25 in Ava. 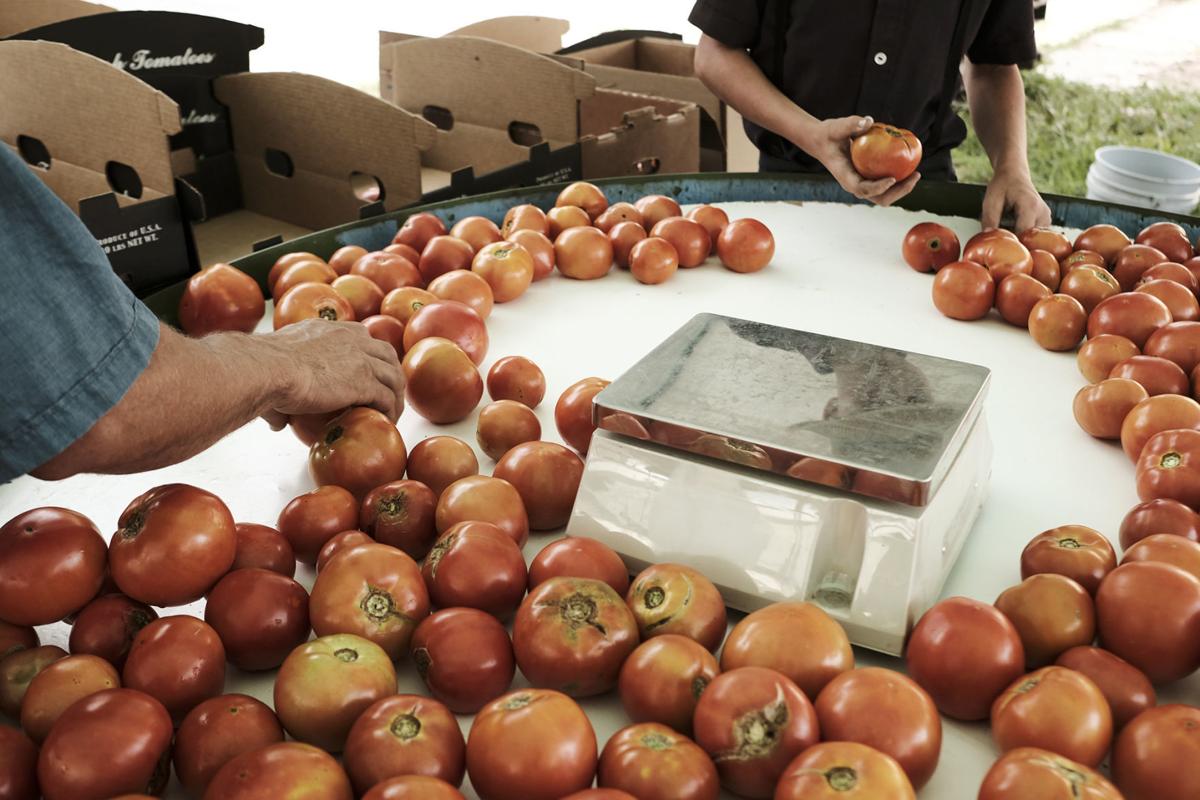 Reuben Mast, left, sorts tomatoes Aug. 7 with his son Jonathon on their produce farm in Ava.

Brothers David Mast, left, and Jonathon Mast dig new potatoes May 31 at their family's farm in Ava. Isaac Smith spent days with the Amish Mast family, learning about their faith and their daily lives. 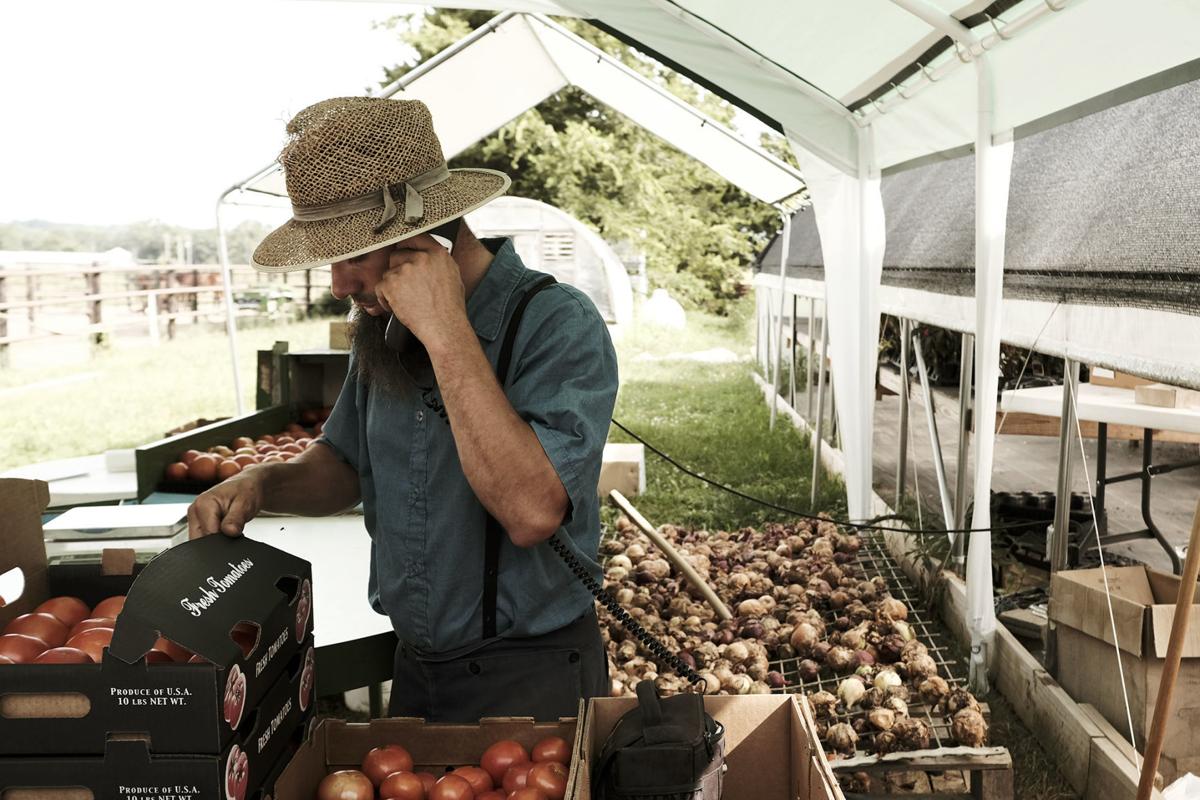 Reuben Mast takes a call Aug. 7 while he and his son Jonathon package tomatoes on their farm in Ava. 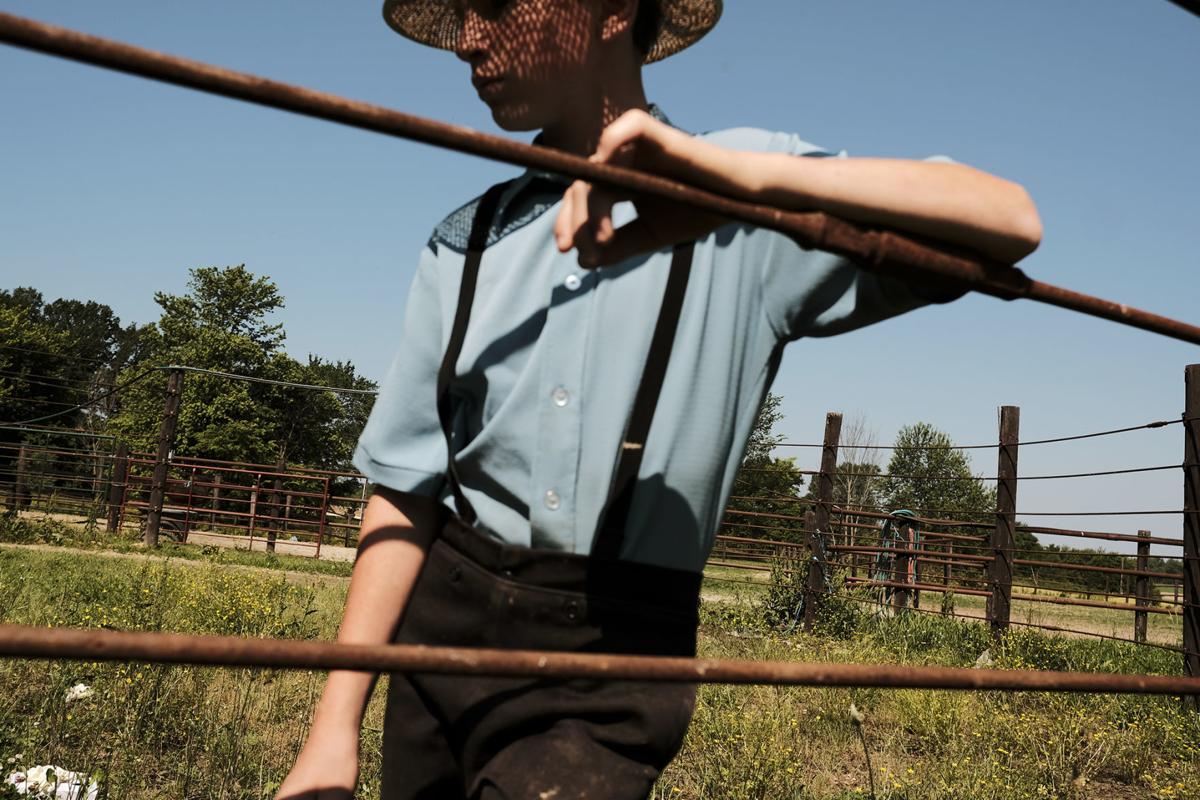 Jonathon Mast is pictured on May 31 at his family's farm in Ava.