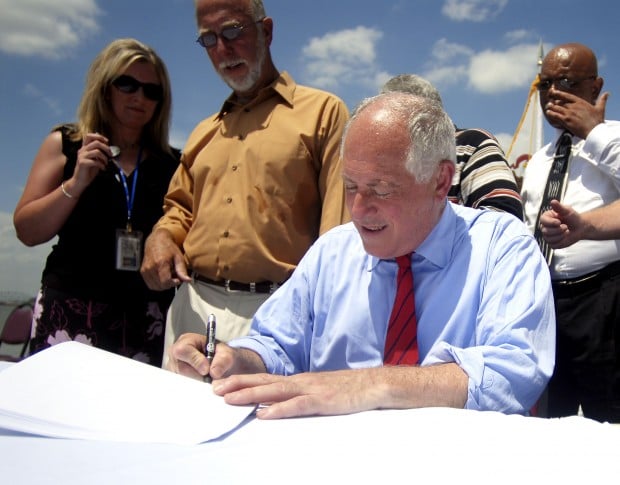 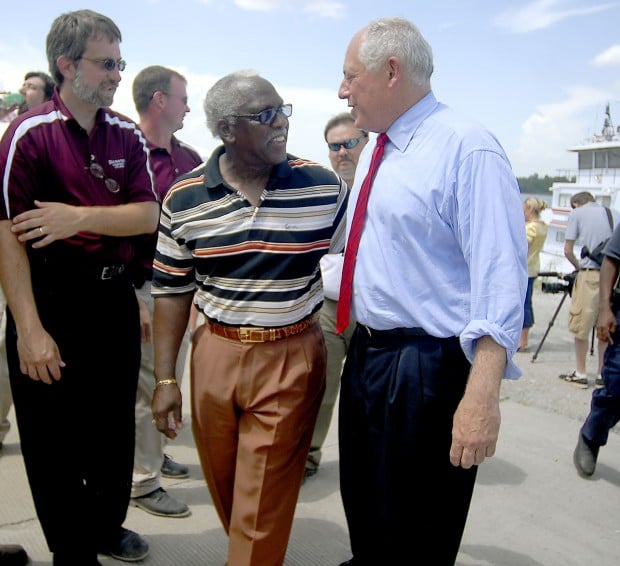 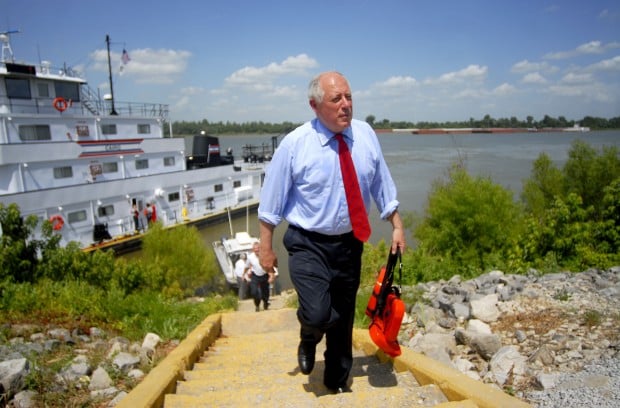 Paul Newton / The Southern Ill Gov. Pat Quinn walks up a flight of stairs from the Ohio River after touring an American Commercial Line vessel after a bill signing ceremony creating the Alexander-Cairo Port District on Thursday, July 8, in Cairo.
BY TOM BARKER THE SOUTHERN

CAIRO - State legislators hope to use the power of the Mississippi and Ohio Rivers to drive economy in southernmost Illinois, as Gov. Pat Quinn arrived in Cairo Thursday afternoon to sign a bill creating the Alexander-Cairo Port District.

Similar to a legislation signed in Massac County in December, the Alexander-Cairo Port District Act will establish a municipal corporation with the power to build terminal and port facilities along the two rivers, which supporters say will boost economy by attracting business to the county and creating needed jobs.

"This is a real important law because we need to have the port district in order to attract the kinds of businesses and jobs that we can get right here in Southern Illinois," said Gov. Quinn. "We've got to make sure that we have the facilities near the rivers that allow businesses to really operate in a positive way."

The governor repeatedly emphasized the importance of Illinois job creation during the signing ceremony near the Ohio River levee in downtown Cairo. Quinn said the state should make the most of its valuable resources, putting as many people to work on the highly traveled rivers as possible.

"It's all about an inland port," he said. "River, rail, highway-we've got it all and we've got to use it all."

Cairo Mayor Judson Childs said he is optimistic about the new port district, saying Cairo is on-track to improve its economic situation.

"We're going to have to wait and see the outcomes, but I see good things coming from this," Childs said. "It's just another boost for us."

Helping move the bill to the governor's table were state Sen. Gary Forby, D-Benton, and Rep. Brandon Phelps, D-Harrisburg, who sponsored the legislation and were present at the ceremony.

"This is a great opportunity, not just for Cairo and Alexander County, but for all of Southern Illinois," said Phelps. "Now that we have the mechanism in place, we welcome everybody to expand and to bring your business to Alexander County."

The signed legislation will include the appointment of a seven-member, uncompensated district board, four members of which will be appointed by the governor. The purpose of the district, managed by its board, is to facilitate the import and export of goods and take advantage of certain rights and powers, such as applying for government grants and appropriations, levying taxes and building port facilities.

One company hoping to take advantage of the new district, American Commercial Lines, also made a presence for Quinn's visit, parking a large boat along the river shore.

Bill Foster, vice president and general manager of ACL's northern division, said the company's operations in Southern Illinois will grow with the development of the port district.

"It's an underutilized transportation form and we are excited to be a part of this and help the city of Cairo and Alexander County develop this into a viable business."

MARION — Mayor Mike Absher revealed plans Monday night for a multi-sports complex, campground, entertainment and retail venture at and around …

Police are seeking information about a suspect wanted for shooting at a group of people Friday in Carbondale.

After 18 months of uncertainty, Southern Illinois businesses 'ready' for a post-pandemic world

On Friday, the state of Illinois entered Phase 5 of its COVID-19 reopening plan, doing away with capacity limits for restaurants, gyms, retail…

Like an 'amateur archeologist' on a dig, artist brings new life to 'ghost' ads in Carbondale

A mural project in downtown Carbondale is not only giving a building's exterior a new look, it also remembering the history of the structure by bringing back vintage advertisements which once adorned the exterior.

For the first time in more than a year, a statewide Christian radio station is again holding public events for listeners and it is starting wi…

Paul Newton / The Southern Ill Gov. Pat Quinn walks up a flight of stairs from the Ohio River after touring an American Commercial Line vessel after a bill signing ceremony creating the Alexander-Cairo Port District on Thursday, July 8, in Cairo.
© Copyright 2021 The Southern Illinoisan, 1001 E. Main Street Professional Park #2 Carbondale, IL | Terms of Use | Privacy Policy
Powered by BLOX Content Management System from TownNews.com.
You don't have any notifications.