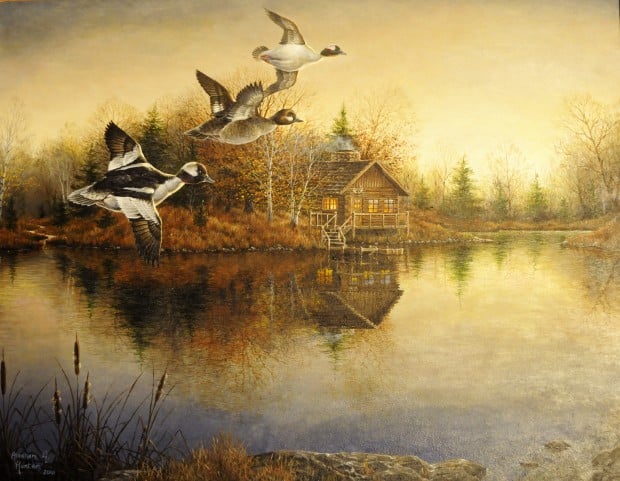 Provided by Abraham Hunter Abraham Hunter has won dozens of awards for his wildlife paintings despite not having formal training in art. Hunter said he talent has increased dramatically in the four years he's been painting. (COURTESY) 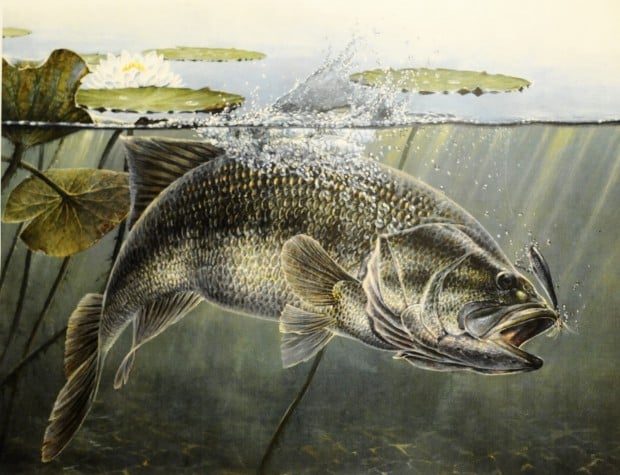 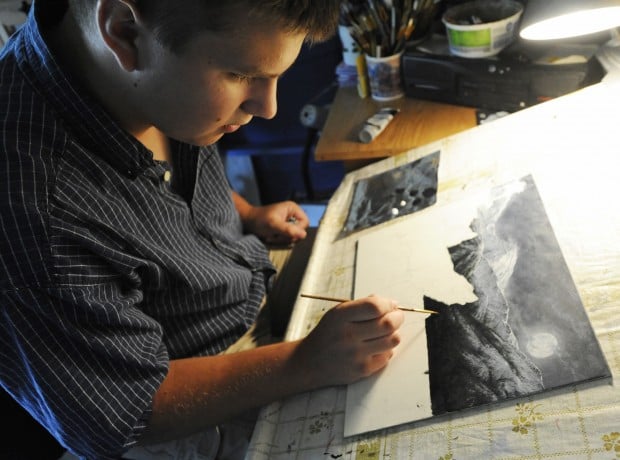 Abraham Hunter works on a painting at his home in Vienna Friday. Hunter, who is 16 and hasn't had any formal art lesson won National Best in Show in Wildlife Forever's State-Fish Art Contest. (Stephen Rickerl / The Southern)

VIENNA — One Southern Illinois teen continues to rack-up art awards, yet he hasn’t had a single formal lesson in his young life.

Abraham Hunter, 16, of Vienna won the National Best in Show in Wildlife Forever’s State-Fish Art Contest for a painting he did of a Large Mouth Bass.

Hunter classifies himself as an outdoor painter, focusing his work on aspects of nature that interest him. He has already won 11 awards for his paintings.

His photo-realistic paintings appear to be work that would take a master painter months to complete. Despite having no formal training, Hunter has a complex understanding of composition, use of color and technique.

His subjects are local, deer, turkey and fish. But Hunter said painting deer and turkey hold a special place for him because of his love to be outdoors and the hunting season. He said he believes people like his work because it is something they can relate to; they look at it and feel like they’ve been there. He said being able to relate to artwork and instantly recognizing what you see is important to him.

“To me a good painting is one that looks as close to real life as possible,” Hunter said. “I want to be able to give people the actual comfort of being there.”

Hunter first attempted to paint in March 2006, in less than three years his talent took on a sophistication of a trained artist and the awards started pouring in. He said his rapid progression is due in part to his home-school schedule. He said he is able to work ahead in school and devote several days at a time to painting.

Hunter said no one in his family line that he knows of was an artist, and attributes his talent as a gift.

“I always tell everybody it’s God’s talent,” he said. “It is a God given talent.”

Hunter and his family are hoping to buy a house where they can setup a public gallery in part of the house. To get there, Hunter said he and his family have started a business selling high quality reproductions of his work. He calls the business His Creation Arts.

Hunter said his four siblings, all talented in their own way, help tremendously in getting his artwork seen.

Hunter has his work for sale in multiple towns across Southern Illinois and plans on participating in festivals and shows to further spread his work.

From riches to rags: Take a look at the story of Cairo's Magnolia Manor

The owner of Cairo's Magnolia Manor, operated as a museum since 1952, is out of cash and desperate for help.

Williamson County Courthouse, court proceedings and judicial department were closed on Monday morning by the county’s presiding judge after two employees tested positive for COVID-19. Court is canceled and those offices will be closed through Tuesday.

The Illinois Housing Development Authority is launching an emergency rental assistance program to help people who have fallen behind on rental payments because of job or income losses related to the COVID-19 pandemic.

SIU Carbondale students will begin moving into the dorms on Wednesday. Here's what we know about how SIU is planning to mitigate the spread of COVID-19 on campus.

The Non-Tenure Track Faculty Association at Southern Illinois University Carbondale has chosen not to join other campus unions in calling for more classes to be held remotely this fall amid the COVID-19 pandemic.

Provided by Abraham Hunter Abraham Hunter has won dozens of awards for his wildlife paintings despite not having formal training in art. Hunter said he talent has increased dramatically in the four years he's been painting. (COURTESY)

Abraham Hunter works on a painting at his home in Vienna Friday. Hunter, who is 16 and hasn't had any formal art lesson won National Best in Show in Wildlife Forever's State-Fish Art Contest. (Stephen Rickerl / The Southern)