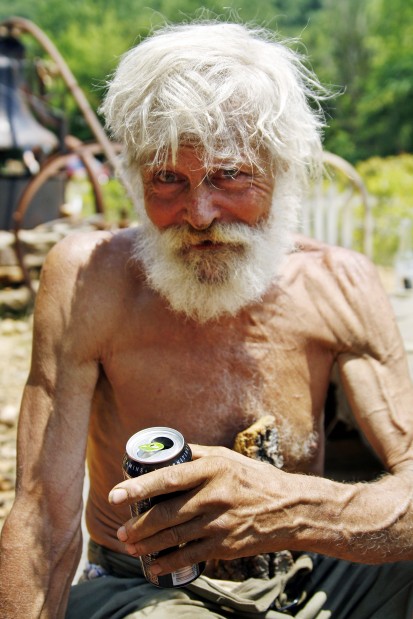 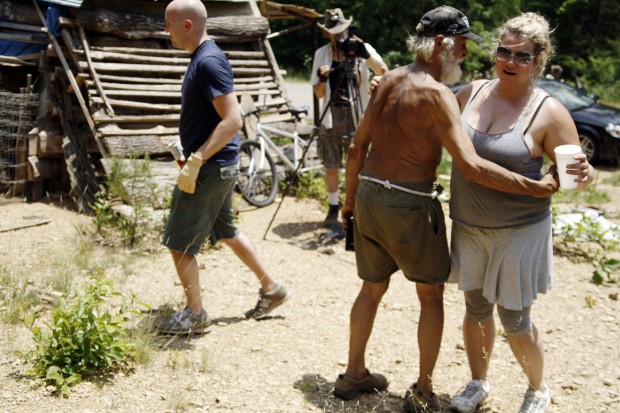 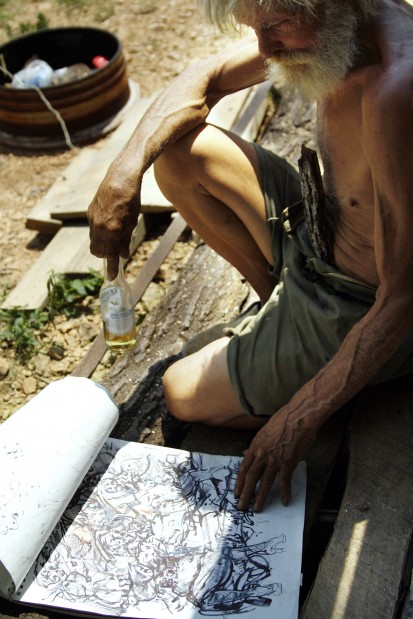 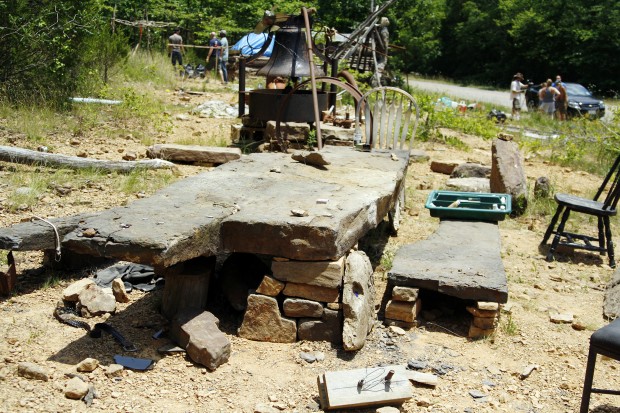 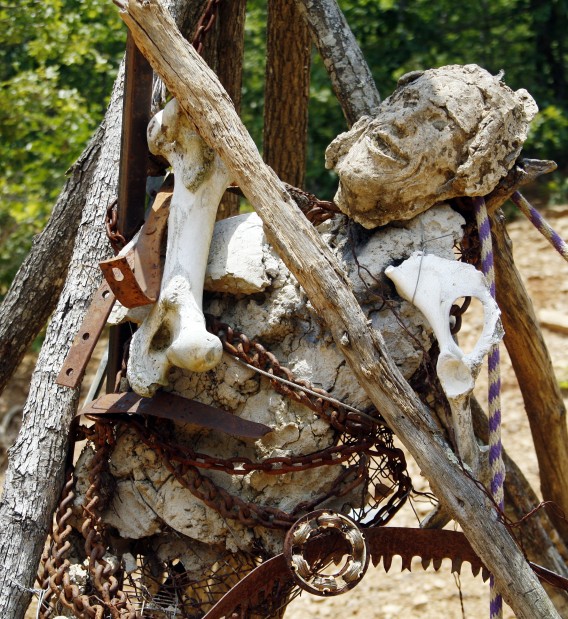 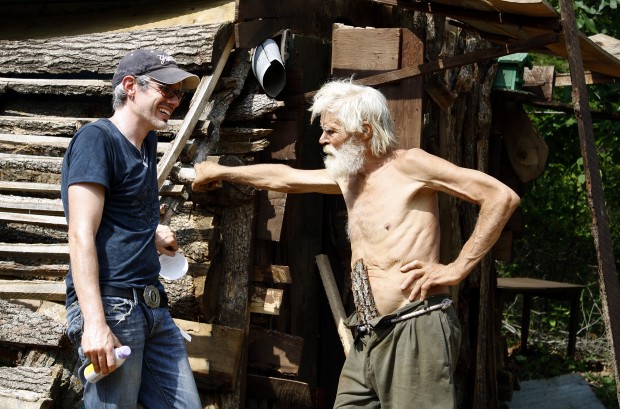 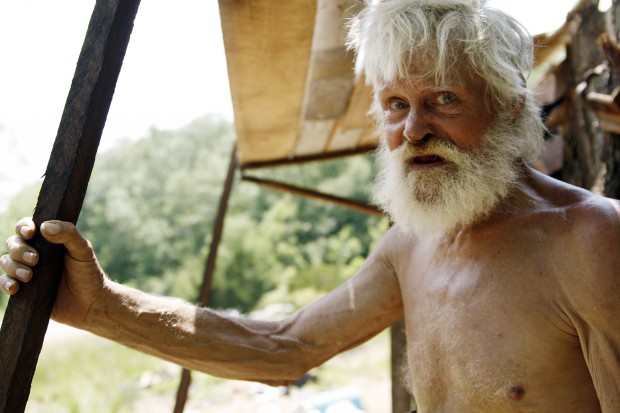 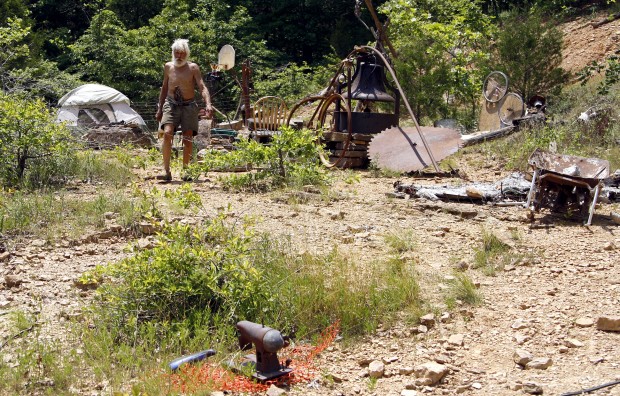 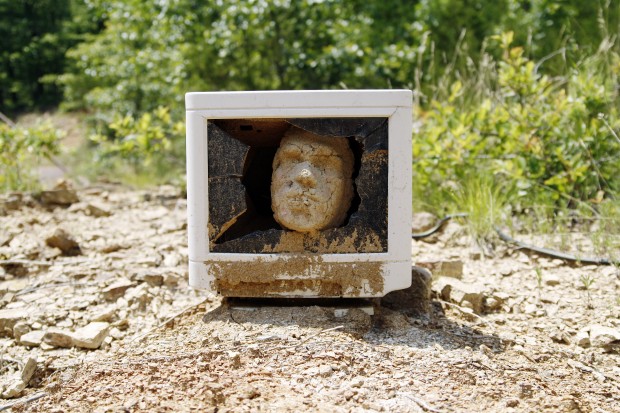 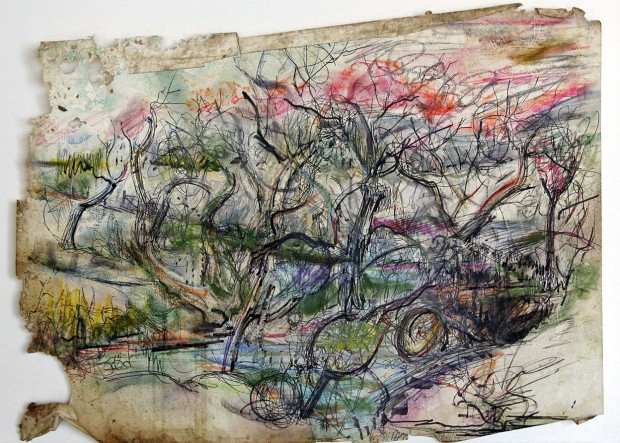 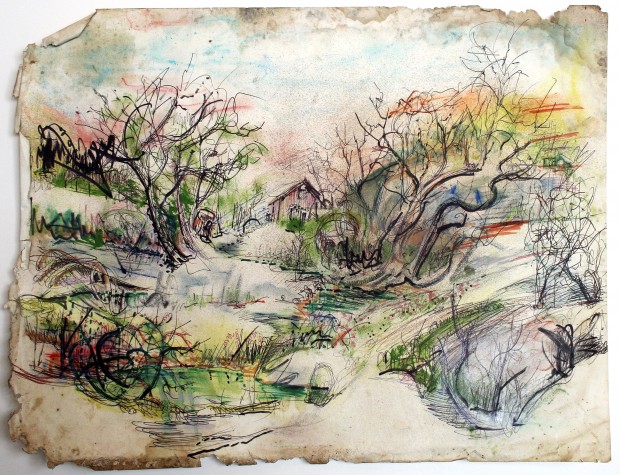 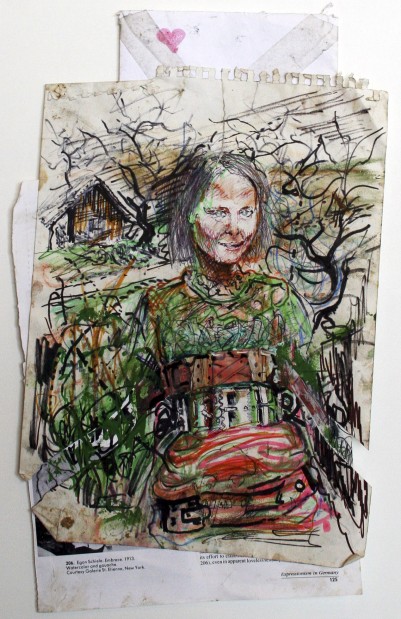 BY BECKY MALKOVICH THE SOUTHERN

WINSLOW, Ark. - Artist Tim West had to retreat into the wild to live a more tame life.

West lives in the heavily forested lands of Mount Gaynor, Ark., the lean-to shack he calls home on cold winter nights a far cry from the Cherry Court home where he lived when he was earning his Master of Fine Arts degree - and a legendary bad boy reputation - at Southern Illinois University Carbondale in the late 1950s and 1960s.

West, who was pulled from near obscurity by a chance encounter with a curious photographer five years ago, is almost as well-known for his lifestyle as he is for his art's style.

His journey to the wild and back includes the 12 years he spent in Carbondale before beating a hasty retreat back to the woods, just one step ahead of the law.

From the wild he came

Tim West cuts a striking figure as he comes out of the woods, thick silver hair, shirtless, his shorts hitched up by a bungee cord, a piece of bark pressing against his stomach to "hold in my hernias."

Lean and strong, West grew up on the mountain, where his family settled to live off the land after life in Santa Fe, N.M., proved too difficult economically.

"I spent my first eight years barefoot in these woods. That's the life that felt natural ... still feels natural," he said.

But his parents wanted more for him. He attended school in nearby Winslow, a rural community of just under 400 people. After getting kicked out of two colleges, he ended up at SIUC, where his mother, Muriel, got a job as a lecturer in the English depart-ment.

"They were getting me ready for the modern world and talked me into going to college. They thought I'd coast through college in art," he said.

He enrolled in SIUC in 1957, he said, and finished his bachelor's degree before entering graduate school to pursue his MFA.

"I've often wondered about him," SIUC professor emeritus L. Brent Kington said. "In fact, several years ago I got a call from a woman at a consignment shop in Murphysboro. She said she thought she had a painting that might be a Tim West, and it was. It was quite good. He was quite a good painter."

So good that Bruce Breland, one of West's SIUC teachers, thought West was "brilliant," Kington said. "A near genius, but he definitely didn't come off that way socially. I remember encountering him in a stairwell. He was a formidable person, very large, muscular, and I think he frightened a lot of people."

"When we first came here, my wife and I used to do a lot of driving in Southern Illinois, just to get used to the area. On a drive to Pope County, it was not unusual to look up on a hillside and see Tim sitting next to his bicycle, his primary transport in those days. We would be on our way to St. Louis and pass Tim going to Ava," he said.

"She was a very outspoken person, with a powerful personality, but Tim was a real handful. She would be very tolerant and accepting of Tim, but on occasion, she would send him back to the "ranch" in Arkansas," Kington said. "I remember once going to their place. Tim was a real pack rat. He had so much metal from scrap yards, magazines piled from the floor to the ceiling, there was just an aisle to go from room to room."

West's antics as well as his art got him coverage in The Southern Illinoisan.

The newspaper clippings paint a conflicting portrait of the artist.

One day, the newspaper would tout West's successes as an artist, telling of West works that were accepted at the Louvre, Met-ropolitan Museum of Art and the Museum of Modern Art.

Other days, his exploits would be detailed in crime stories: creating a disturbance at Spudnuts restaurant; skinny dipping at Campus Lake, an offense for which he was fined $20 and banned from campus.

He was arrested for stealing kettles, jugs, a shingle-maker and other items from a residence, but perhaps his most serious crime was an attempted break-in at a Carbondale thrift store.

A shotgun blast in his direction from the building's owner thwarted that attempt and earned West a trip to intensive care for treatment of pellet wounds to the rear.

"In Illinois, I never became a normal citizen. Up there I was running with the people who stay up all night," West said. "I had trouble adjusting to the civilized world. I went crazy living in the city."

West was even briefly considered a prime suspect in the burning of Old Main, but "I told the truth, and they believed me."

He had many encounters with local law enforcement and credits two SIUC officers with saving his life.

"Don Ragsdale and Carl Kirk, they saved my life. They were awful good to me. They wanted to help me, and I sure appreciate it," he said.

Part of his problem was alcohol, he said.

"I drank a lot. For 15 years living that was a lie; you don't know who you really are until you are sober," he said. "I had so much trouble adjusting to the civilized world, I decided to go back to how I was that first eight years. I got my MFA and went back to the woods to live like an animal."

Return to the wild

For the next four decades, West lived quietly in the woods, furiously creating his art.

"I knew I had a unique vision but I sure didn't know how to sell it. Most people around here in the country don't have an opinion on art, so I wasn't hearing criticism or praise," he said. "I would trade my art for rocks or tools and I thought that was pretty good."

One of his more interesting pursuits caught the eye of Diana Michelle, a fine art photographer from Fayetteville, Ark., some 30 minutes from Winslow.

"I was driving around one day looking for abandoned houses to photograph, and I saw the most incredible fence made of bicycle parts, wheels, frames, shifts," she said. "I didn't see anyone around so I left a note at a mailbox. Soon after, Tim wrote me a letter. He said to come on out, honk three times and he'd come out of the woods. I didn't know what to expect. I was hoping for some-thing cool. That was five summers ago and I've been coming out here ever since."

Diana was fascinated by the artist and his art.

"He's different and I like that, I seek people out like that," she said. "And his art is faraway, creepy and surreal and those are things I like to photograph."

The two became fast friends as Diana spent months photographing West. The two teamed up for an exhibit at M2 Gallery in Lit-tle Rock, Ark. The show included both West's art and Diana's photos of the artist and his home.

So interesting was the artist that Diana decided to shoot a documentary called "Westland." The documentary is being reworked now to include newly shot footage, including preparations for another collaborative exhibit at M2 Gallery.

"I'm real glad I didn't get this kind of attention at 30," West said. "It may have turned me into a negative person. I don't want my ego to be any size other than what it is. You lose yourself, and I don't want that to happen. With me, there is no pretense. I'm not pretending I'm an English lord. I am who I am and that's who I'll stay."

CARBONDALE - The 1960s were a defining era for the Southern Illinois University art scene, setting high standards and sealing the reputation t…

Art brut: It doesn’t get much more ‘outsider’ than this

Art Brut, or outsider art, is generally defined as art created by those who live outside society's mainstream, who don't conform to cultural n…