Become a Member
Read Today's E-edition
Share This
Bost: Rant emotional, but point made
17 comments
Share this
1 of 2 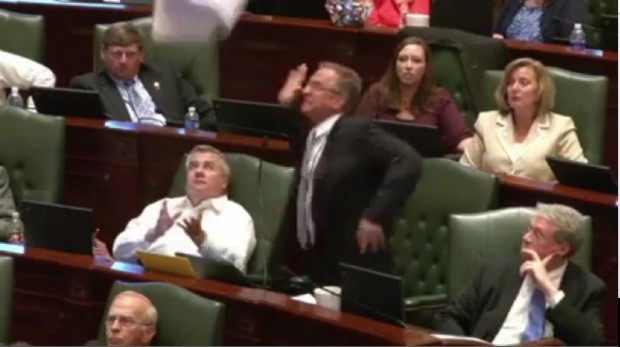 A screen capture from the Mike Bost video. 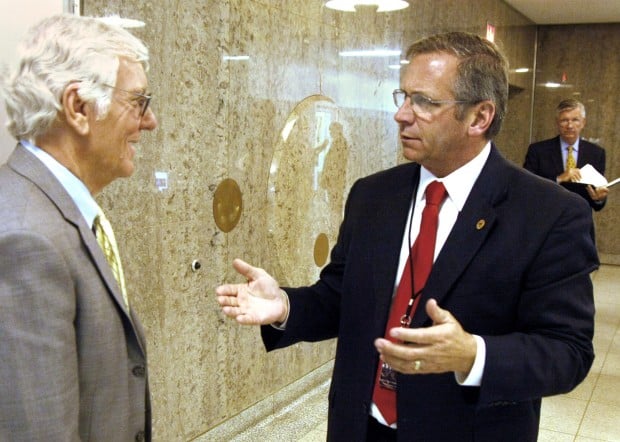 Steve Jahnke / The Southern State Rep. Mike Bost and President Glenn Poshard bump into each other in the hallway as Poshard was on his way to meet with two other legislators in their offices across from the Capitol Building Tuesday.

State Rep. Mike Bost, R-Murphysboro, said colleague reaction Wednesday, a day after he erupted at the onset of a discussion to overhaul state pensions, was generally empathetic.

“I think they understand. I don’t normally do that,” Bost said late Wednesday afternoon while legislators worked to get a state budget passed and continued work on pension reform.

It began, “Again, total power in one person’s hands — NOT the American way” shortly before Bost tossed a handful of papers up and gave them a midair swat.

Bost tore into Madigan for purportedly making rules that bind legislators and pervert the idea of representative democracy. “Enough,” Bost said during his outburst. “I feel like somebody trying to be released from Egypt. Let my people go. My God, they sent me here to vote for them.”

“One good thing about this is people in the media understand the tyranny we’re under with this leader,” Bost said.

He said he was contacted all day by national media. Additionally, websites such as The Drudge Report, The Huffington Post and YouTube carried clips. The state lawmaker said he received so many emails, his cellphone quit working.

Bost said his outburst came after he received an overnight, Madigan-staff rewrite of pension reform, about 300 pages long, about 7:40 a.m. — only 20 minutes before the House was to convene.

“We’re not talking a simple name change of agency,” Bost said about the rewritten plan that he claimed ignored Republican attempts to relieve school districts from assuming pension costs. The GOP says that would result in local property tax increases.

“You are shoving it down peoples’ throats again. He (Madigan) is taking your power,” Bost said Wednesday, reiterating much of the language from his Tuesday outburst. “He (Madigan) creates the rules. … That’s where he has the power.”

“I don’t know necessarily if I have a reaction to it. It’s the end of the session and people get frustrated. Tensions are so high right now,” said state Rep. Brandon Phelps, D-Harrisburg.

Phelps said current discussions lead him to believe a state budget will get passed before midnight today, the scheduled end of the regular session. Votes after that point require super-majorities for passage.

“It’s pretty partisan. If I was a betting man, I’d say ‘Yes,'” Phelps said about a budget bill. He said votes are lacking for pension reform.

State Rep. John Bradley, D-Marion, declined comment on Bost’s remarks. He said he was busy Wednesday with work on enterprise zone legislation that would allow for greater transparency and accountability.

CARBONDALE - A minute-and-a-half video clip taken from the Illinois House floor in Springfield is getting state Rep. Mike Bost of Murphysboro …

A screen capture from the Mike Bost video.

Steve Jahnke / The Southern State Rep. Mike Bost and President Glenn Poshard bump into each other in the hallway as Poshard was on his way to meet with two other legislators in their offices across from the Capitol Building Tuesday.