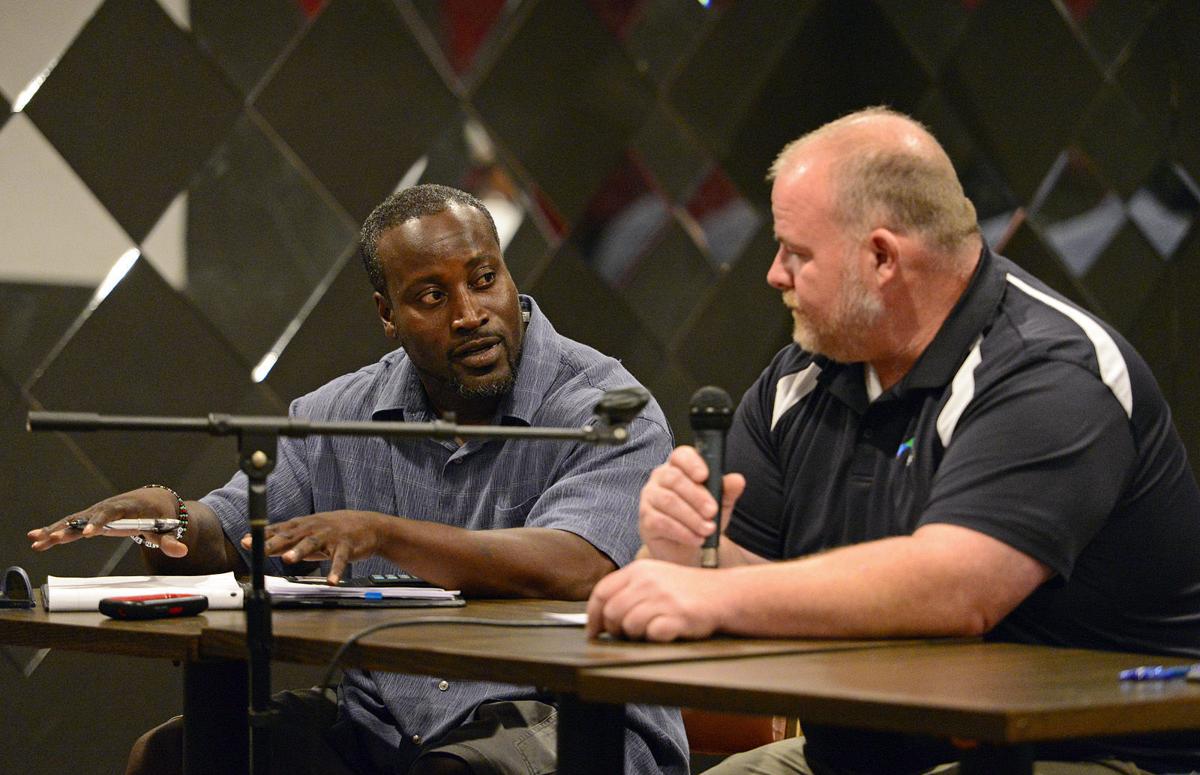 Steven Tarver (left) asks a question of Tom Upchurch, interim executive director of the Alexander County Housing Authority, during a community forum at the Talk of the Town Lounge on Aug. 31, 2015 in Cairo. 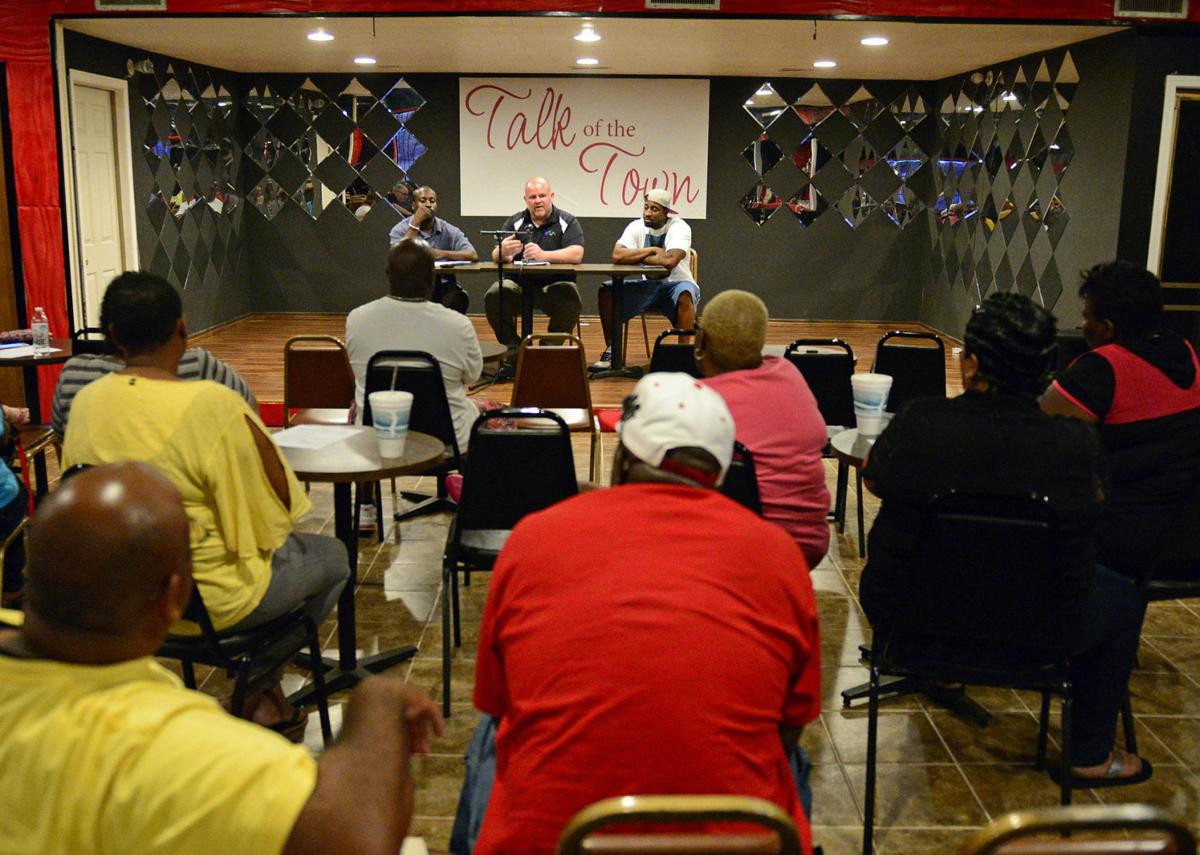 Tom Upchurch (center) interim executive director of the Alexander County Housing Authority, answers questions from audience members during a community forum on Monday evening the Talk of the Town Lounge in Cairo. 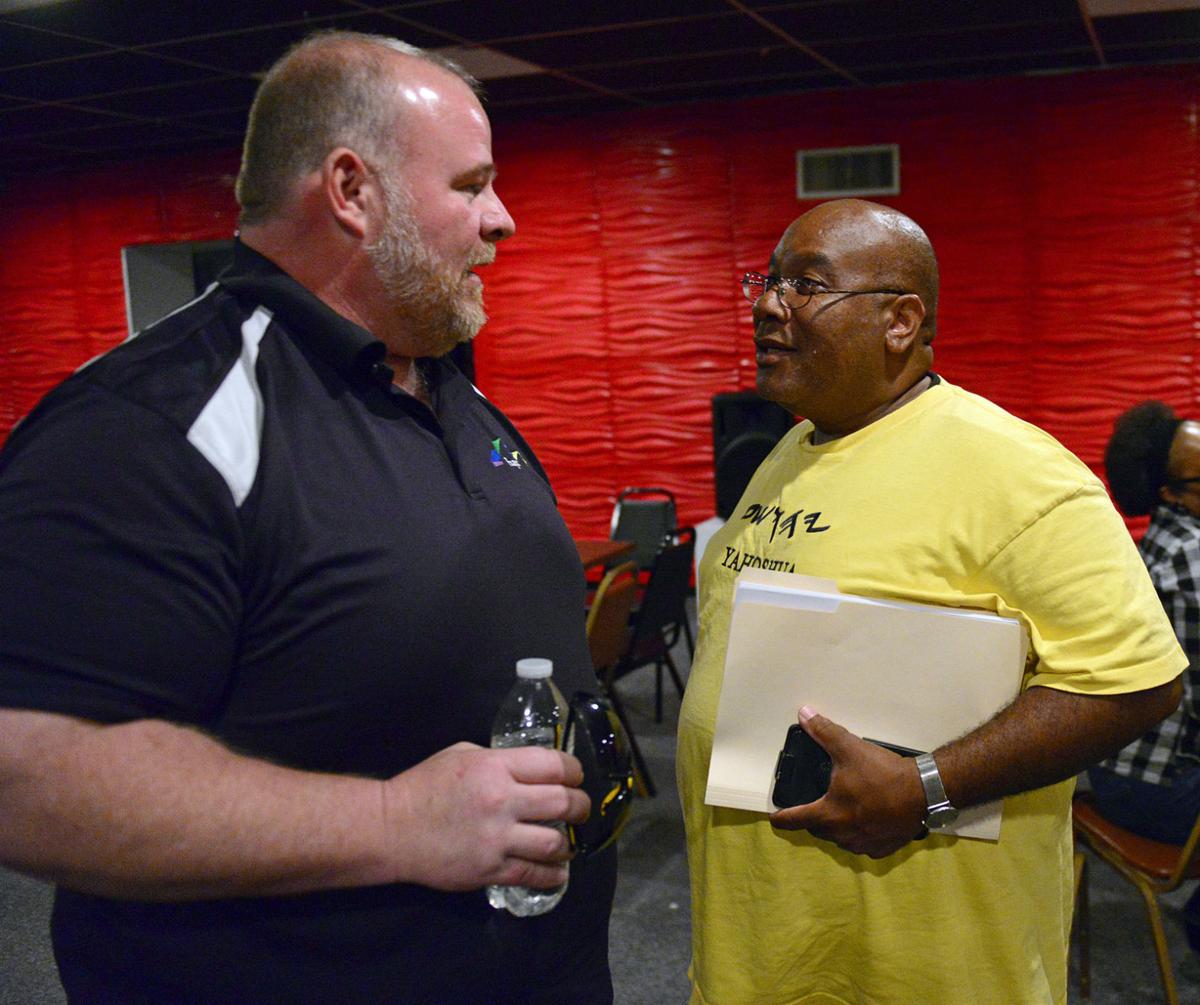 Phillip Matthews (right) talks with Tom Upchurch, interim executive director of the Alexander County Housing Authority, following a community forum on Monday evening at the Talk of the Town Lounge in Cairo.

CAIRO – About 20 people gathered here Monday night for a community forum to ask questions, express concerns and brainstorm solutions regarding the situation with the Alexander County Housing Authority, where former management is accused of misspending hundreds of thousands of dollars while public housing developments for people in need deteriorated into substandard conditions.

The meeting was sponsored by a group called Men of Power, founded in recent months by three brothers who grew up in Cairo. It was the second meeting for the group. The first one this past Monday focused on what members of Men of Power and the sister group Women of Strength could do to help the community and young people living here in need of adult mentors, and to encourage people to take more pride in Cairo.

The Tarver brothers – Steven, Shawn and Harvey – said they’ve been brainstorming for several months ways to help turn the community around because they want it to be a place where families can raise their children in a safe environment, and build a modest life.

At the meeting, various participants said that regarding allegations of misspending, “somebody needs to go to jail,” while others called the former management, which included longtime executive director James Wilson and board members who served for years, “incompetent” and “ridiculous.”

At Monday’s meeting at their family business, Talk of the Town, the group asked the interim director of the Alexander County Housing Authority to address citizens’ concerns regarding the financial condition of the public housing agency, and the status of the housing, particularly the developments in the worst condition that largely house African-American families.

Tom Upchurch, the director of the Jefferson County Housing Authority who has been retained on a six-month contract to help stabilize the housing authority, told the group that he’s been working as fast as he can to correct the situation.

He noted that he could not address what took place prior to the start of his contract regarding management, and said that investigations into any alleged misdeeds are not what he was hired to do.

“I can absolutely understand the mistrust you guys are feeling,” Upchurch told the group of about two dozen residents, adding, “It’s foolish to believe no one is paying attention to that.”

But in the face of the frustration and anger expressed by citizens regarding what has occurred that led the housing authority in a state of financial turmoil, Upchurch said his goal is to focus on “where do we go from here.”

Upchurch said his goal is to help train staff and board members, recruit a full-time executive director and determine a capital improvement plan for the housing developments to provide safe, appropriate housing for people who depend on it. Upchurch said his goal is to do that without providing any further harm to the citizens of Alexander County, and Cairo specifically.

Asked about first steps, Upchurch noted that the housing authority has retained Eggemeyer Associates Architect, based in Herrin, to perform an exhaustive review of all of the developments owned by the housing authority, with a particular emphasis on the Elmwood and McBride family developments where conditions have been called “third world.” Upchurch said the firm will begin its work in mid-September, and inspect all units. A determination will then be made about how to move forward regarding capital needs for the housing authority.

Some concerns were expressed that the units, which have fallen into disrepair, may have to be torn down because their conditions are no longer appropriate for human habitation, and that they may not be rebuilt. There are some slightly nicer family units in nearby Thebes, but several at the meeting expressed that Cairo, including the few businesses that remain and the public school system, would be further harmed if there’s a mass exodus of families. Upchurch said he's sensitive to that concern.

Many attendees at the meeting wanted to know how the situation could go on so long unstopped at the housing authority, where former management is accused of offering overly generous salaries and benefits, approving questionable contracts and retirement incentives, and funding unnecessary travel, among other problematic spending.

They asked why federal officials with the U.S. Department of Housing and Urban Development, which oversees public housing programs across the nation and regularly conducts audits of housing authorities, didn’t do something sooner. The Southern Illinoisan’s attempts this past week to reach HUD’s regional office in Chicago were unsuccessful, and offices were closed after the meeting on Monday.

Upchurch said he couldn’t answer for HUD officials. In response to questions, he explained that the five board members of the Alexander County Housing Authority, who must sign off on budgets and contracts, are appointed by the county board chairman to five-year terms.

“That board needs to change,” said Phillip Matthews, an outspoken citizen at the meeting. Matthews said that although there have been three new appointments to the board in 2015, some people on the board also served during Wilson’s tenure, and signed off on some of the questionable spending and generous labor contracts. He noted that a member of the board was also a lead negotiator with the International Laborers’ Local 773, which represents employees, which another attendee called a blatant “conflict of interest.”

Though that board member, John Price, was not reappointed, Matthews said citizens still “question even some of the new appointments.”

“They are all friends,” he said.

Upchurch said those concerns would need to be taken up with the county board. He added, “Just keep asking those questions.”

The Tarver brothers who hosted the meeting and helped start Men of Power/Women of Strength say that if people come together Cairo has the potential to be a clean, safe city. They noted that the dilapidated Alexander County city has so much potential for development sitting at the confluence of the Ohio and Mississippi rivers, and believe that if people motivate to make a difference, change is possible.

The men say they were motivated to start the organizations because something needs to be done to save Cairo, and also as a way to honor their mother, Dorothy Taylor, who died in December, and who many know as “Miss Santa Claus” because even after she moved to Gary, Indiana, she always made regular trips with donations for families in need, as well as sweet potato pie for families extra dear to her, and ice cream for the children.

The Tarver brothers say the two groups plan to work together to provide an opportunity for adult men and women to partner with children, teenagers and young parents in town, and to encourage citizens to take personal responsibility for their own property, and to help pitch in to mow overgrown yards of abandoned buildings, and regularly pitch in to clean up litter.

This was the group’s second meeting at Talk of the Town, a new establishment opened by the Tarver family in April that is managed by Shawn Tarver. Talk of the Town is a bar and community meeting space that is intended to bring people together socially for music, poetry readings and birthday parties, as well as act as a central meeting place for citizens concerned about the direction of the town.

“I don’t think people have asked for too much more than a good quality of living,” said Harvey Tarver, a disabled Army veteran who lives in the Shuemaker Building that is part of the housing authority.

Steven Tarver (left) asks a question of Tom Upchurch, interim executive director of the Alexander County Housing Authority, during a community forum at the Talk of the Town Lounge on Aug. 31, 2015 in Cairo.

Tom Upchurch (center) interim executive director of the Alexander County Housing Authority, answers questions from audience members during a community forum on Monday evening the Talk of the Town Lounge in Cairo.

Phillip Matthews (right) talks with Tom Upchurch, interim executive director of the Alexander County Housing Authority, following a community forum on Monday evening at the Talk of the Town Lounge in Cairo.