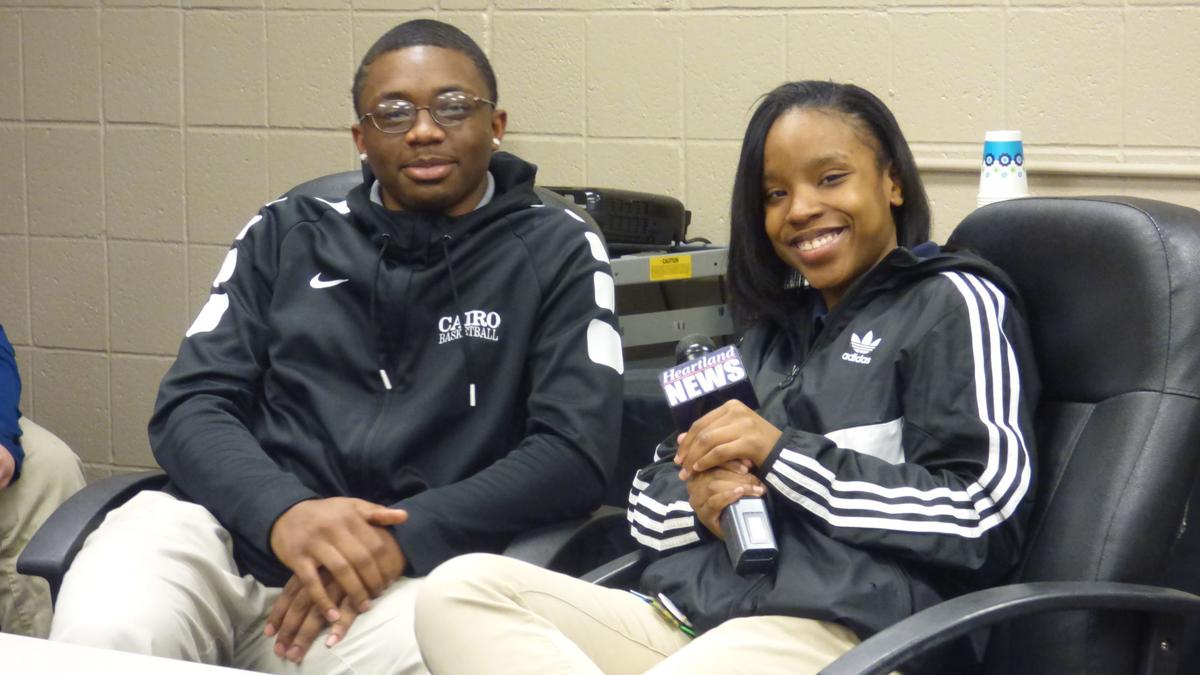 Cairo senior Shamari Smith pretends to interview classmate Malachi Brown using a microphone from a local television station after a press conference Wednesday at the school. 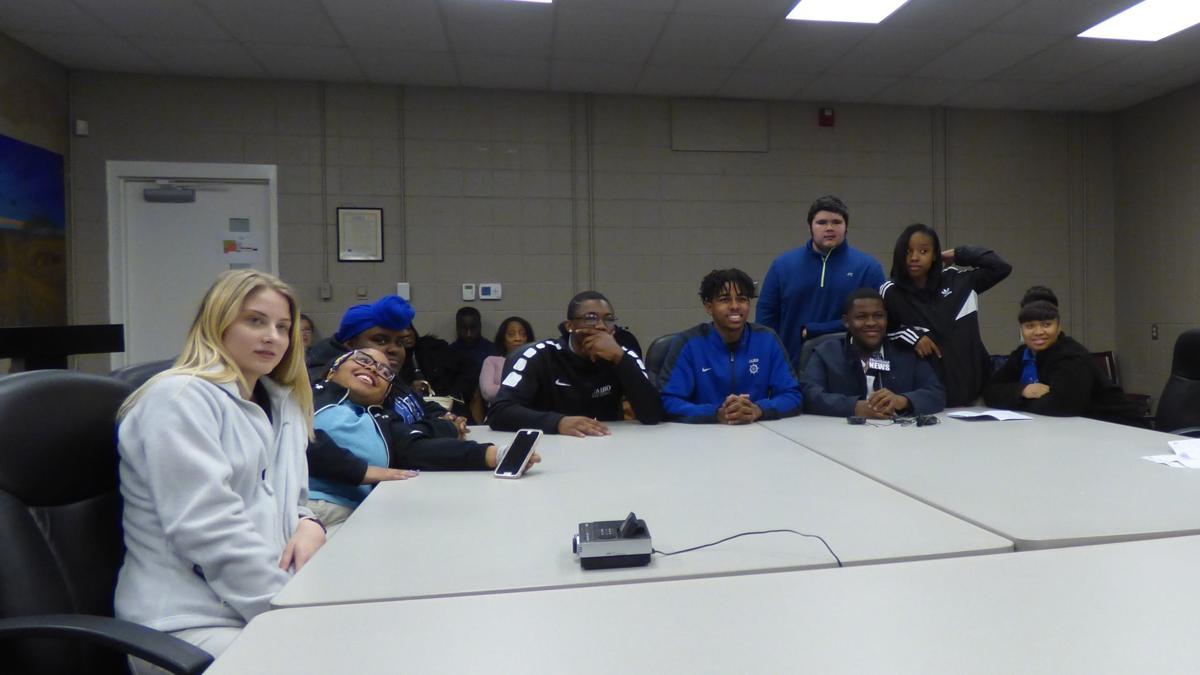 Cairo seniors talk about plans for college Wednesday at the district board room in Cairo Junior Senior High School.

CAIRO — Members of Cairo Junior-Senior High School Class of 2018 believe Chris Kennedy, Democratic candidate for governor of Illinois, is wrong about their readiness for college.

Earlier this month, Kennedy met with the editorial board of The Southern Illinoisan. During the meeting, he said the issues in Cairo were with education.

“Zero percent of kids in Cairo are college-ready. Seventy-five percent of high school graduates need remedial education,” Kennedy said. “The problem with Cairo is not with the housing authority. It’s with the school. It needs to be fully funded by the state.”

The senior class disagrees. In fact, 10 of the 24 members of the Class of 2018 are taking college classes this semester through Shawnee College Escrow Program. About half of them will graduate with a full year of college credit or close to a year. They will start college in the fall as sophomores.

In addition to their classes, several students have been accepted to SCC Phi Theta Kappa international honor society for two-year colleges and academic programs.

Cairo seniors have received scholarships and been admitted to colleges and universities across the country. Eight seniors spoke on behalf of their class. They started by talking about the colleges that accepted them.

Olivia Mayberry has been accepted into several universities, including Penn State, William Woods, Seattle and St. Martins. Since St. Martin’s offered her a $64,000 scholarship, it is on the top of the list. She plans to major in education.

“It didn’t really faze me because if you know any of us, it’s not true,” Mayberry said.

Lanaya Nelson wants to pursue a bachelor’s degree in biology, then go to graduate school to become a physical therapist. She has been accepted to more than 10 universities, including SIUC, SIUE, EIU, Texas Southern, Culver-Stockton, Tennessee State, Jackson State and Hutson-Tillotson.

Breona Childs, who wants to be a neonatal nurse, has been accepted to seven colleges.

“I don’t know where he gets his information, but he’s wrong," Childs said. "As long as we believe in ourselves, we can achieve anything."

Malachi Brown plans to study to become an orthopedic surgeon. He has been accepted at SIU, Culver-Stockton, Alabama A&M, Alabama State and St. Xavier. For Brown, Kennedy’s comments are motivation to stay focused on that goal.

“Our entire class is smart. We’re going places. We will just have to show them, not tell them,” Hicks said. “We have a small town, a small school, but there is a lot of love here.”

Ke’Ron Jackson, senior class president, has been accepted to Spartan College in Oklahoma, McKendree, John A. Gupton College and Norton. He will study mortuary science.

“I want to come back to my city, Cairo, Illinois, and make my own business,” Jackson said. "He [Kennedy] needs us as voters. We are 18 and we can vote. We don’t need him.”

Jackson is sure he and his classmates will be successful because they have support of their school community, the city, their families and each other. He called the school and his class a family.

Smith named many great people who all had doubters, like Michael Jordan. She added that being from Cairo, she and her classmates have doubters. She only had one thing to say to Kennedy.

“I want to thank him for doubting us, because it will push me harder,” she said.

Evers said she met Smith when she walked into her office and told her she was going to go to Harvard University and be a lawyer. Smith was in sixth grade.

“It’s a community thing. I met these people in sixth grade, and they have been at my side ever since,” Lester said. “People talk. You cannot get mad at his [Kennedy’s] opinion.”

Lester wants to be a correctional counselor and plans to study sociology.

“There’s a lot of kids who need an extra push," Lester said. "As a class, we had the extra push to succeed."

The students talk about support from their teachers and school administrators, but they also received support from the organization Men of Strength, Women of Power, according to Steven Tarver. The group adopted the class in eighth grade and is providing them with mentoring through high school.

“They are not only qualified for college, they are street ready,” Tarver said.

Guidance counselor Zachara Nelson pointed out that 42 percent of the class has been accepted to college.

“I am so proud of the entire class. They work hard. They play hard. And they study even harder,” Nelson said. “You will see them in Congress, in hospitals and schools all around the country.”

On behalf of the class, Jackson extended an invitation to graduation to Kennedy, which will be at 10 a.m. May 19. They prefer Kennedy to be at the school by 9 a.m., so he can meet students. Jackson said Kennedy can speak at graduation, if he wants to speak.

Constance Williams is a retired Cairo High School principal and a city council member. She was acting as mayor pro tem on Wednesday morning.

“We are no longer going to let people come in here during an election and talk about our school,” she said. “These children are protected by their parents and people who love them in this community.”

Superintendent Andrea Evers did not speak much, choosing instead to let the seniors speak for the school. She does expect 16 of the 24 seniors to go to college. Four will go to the military. Seven of the students exceeded the national average on SAT tests last year.

“Anyone who uses one matrix for a narrative is irresponsible,” Evers said.

A spokesperson for the Kennedy campaign said he was using data from the Illinois Report Card to talk about the inequity in school funding across the state.

Kennedy released this statement Wednesday: “I see the promise and potential of our students, our teachers and our public schools, then I see the failing of the state government to adequately provide them the resources. It is the fault of Springfield that only 6 percent of Cairo Junior/Senior High School students haven’t met college readiness levels. In fact, 0 percent are college ready when it comes to math. That isn’t the fault of the students or the teachers. It’s the fault of a failed state government. I am going to change that by funding our schools with a progressive income tax instead of local property taxes which shortchange our students and our schools. It’s time for a change.”

The Illinois Report Card uses data from ACT tests to measure college readiness, according to www.illinoisreportcard.com. Beginning in 2016, ACT was not the required Illinois assessment.

Besides the 24 seniors and school administrators, the meeting was attended by Alexander Democratic Chairman Phillip Matthews, school board member Brenda Gooden, Principal Lisa Thomas and others.

Leaders at SIU once considered demolition of "the towers." Now, the three high-rise residence halls not only house students, they are getting upgrades.

A viral video by a professional bass fisherman is bringing attention to an employee of Vienna's Dollar General store.

Briana Harris was laid to rest Nov. 27, after dying from stomach cancer on Nov. 20. Later that day the family's house caught fire, and the community has been rallying behind the grieving family since.

State Sen. Terri Bryant (R-Murphysboro) believes Illinois Department of Corrections has broken an agreement it had with the residents of Murphysboro.

Cairo senior Shamari Smith pretends to interview classmate Malachi Brown using a microphone from a local television station after a press conference Wednesday at the school.

Cairo seniors talk about plans for college Wednesday at the district board room in Cairo Junior Senior High School.