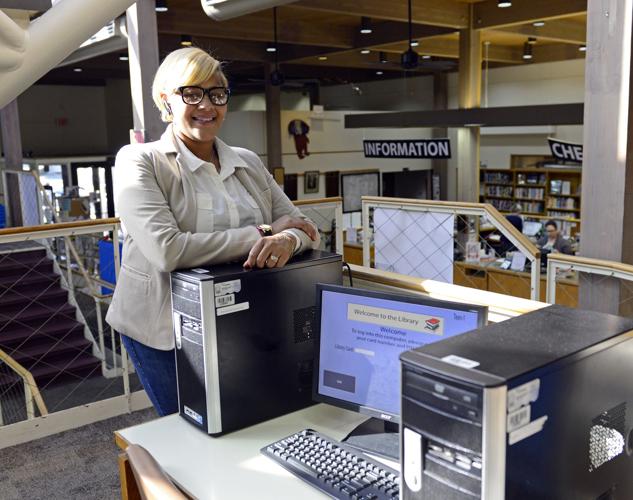 Shannon Butler, a graduate student in the SIU School of Social Work, is an intern at the Carbondale Public Library who is available to connect the homeless and low income people with resources to aid them in improving their lives. 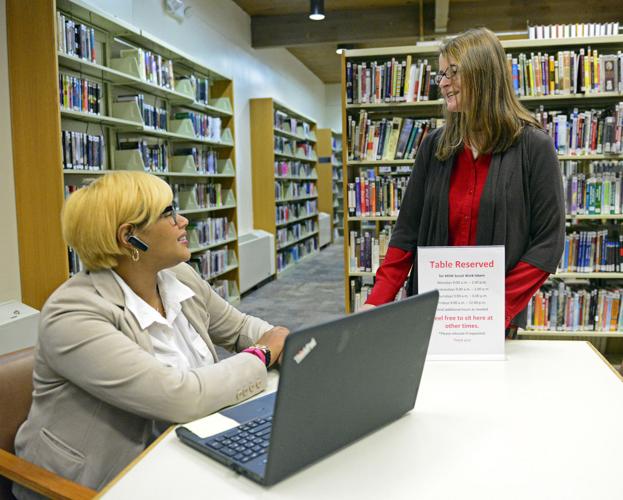 Shannon Butler (left) talks with Diana Brawley Sussman, director of the Carbondale Library, at the library on Thursday morning. Butler, a graduate student in the SIU School of Social Work, is interning at the library and will be connecting the homeless and low income people with resources to assist them in areas such as applying for work and health care.

CARBONDALE — When Shannon Butler arrived for her internship at the Carbondale Public Library on Thursday morning, the graduate social work student already had a young woman waiting to talk to her about helping her find her mother a job and a place to stay.

That's Butler's job these days, helping people — especially those who are homeless — find shelter, secure jobs and other resources they need. Butler works from the Carbondale Public Library as its first social work intern, mirroring a young, but growing trend of placing outreach workers in public libraries to address the needs of the homeless who congregate there.

"It fits so well with libraries," said Diana Brawley Sussman, the library's director. "(It's so) far beyond books and digital media and programming."

Sussman said this new way of thinking has library directors and staffs across the country looking at their communities and trying to figure out what their communities' needs — or lack — and trying to offer that to them. The idea for a social worker at the library grew out of discussions from the Sparrow Coalition — a group of individuals who came together earlier this year to address issues of poverty, beginning with area homelessness — of which both Sussman and Butler are members.

"It may seem like a small thing to some, but having a social worker in the library is really significant," said Marleen Shepherd, whose divinity work led to the founding of the Sparrow Coaltion. "This is an ideal location to reach people in need, because many who are struggling with poverty come to the library to access its resources."

It's not clear exactly how many people are experiencing homelessness in this region, but the BCMW Community Services in Centralia documented 346 homeless people this past January, 30 of whom were "unsheltered" (meaning, they are living outside or on the streets).

The past few years has shown the issues of the homeless spending all day at public libraries being discussed at gatherings of the American Library Association, said Julie Ann Winkelstein, who wrote "Safe in the Stacks: Community Spaces for LBGTQ Youth."

“I would say it hasn’t reached a tipping point by any means, but definitely the awareness is beginning to grow,” Winkelstein said.

Winkelstein, a librarian for 20 years, said people who are experiencing homelessness find refuge in libraries, as they leave an outside world that can treat them harshly. She talked about cities where outdoor benches are installed with arms or window wells with sharp pointy objects in them both instances, she said, of trying to prevent those experiencing homelessness from laying down and sleeping.

Other cities have ordinances against sitting or laying down on the street curb, again, what she called "anti-homeless" tactics. Some who are homeless sleep during the day because they stay awake at night to keep themselves safe, she said.

"So they’re coming in for a respite from that for a place where they can be quiet and read and use the Internet and just be safe …," Winkelstein said.

Sometimes they may find accommodating spaces inside libraries, but not always. Winkelstein talked about libraries that still have what she called "anti-homeless policies," those that forbid bags in the library, or target foul body odors or warn against bathing or washing up in bathrooms. While a library might not look twice at a woman wearing too much perfume, staff might take offense at a homeless person who smells badly: In the case of some women who are experiencing homelessness, they are known to keep bad body odors to ward off sexual attacks, Winkelstein said.

“I think there are a lot of anti-homeless policies inside and outside the library,” Winkelstein said.

She said awareness is raising around the issues of those people who are visibly homeless, but not those who are the "invisible."

The Carbondale library staff partnered with Southern Illinois University's School of Social Work to bring a master's level student aboard as its first intern. Butler, a master's-level social work student, was chosen for the spot; her internship supervisor, SIU professor Dona Reese, is also a member of the Sparrow Coaltiion.

Sussman researched how other public libraries were dealing with the issue of homeless and came across programs run by public libraries in San Francisco and San Jose, Calif. They used those as models to fashion the Carbondale library program.

Butler spent part of this week training other library staff on what she expects to do and how they can support the work and meet the needs of people needing services. Those needing or wanting services can fill out an intake form at the library's front desk.

She is available to help them find employment and career assistance, medical services, food banks, diapers, child care and housing. She will also be able to help people get assistance to complete a GED and apply to college and seek financial aid through the free FAFSA application.

Butler said it's not clear how many people she will help each day, but could help about one every one-and-one-half hours or up to seven people on a longer work day like Thursday.

Sussman said it was too early to say whether the internship would be extended into the summer or the next school year.

The Carbondale Public Library is debutting its social-work intern program, which will place a graduate-level social work student in the library to help match people with community resources they need.

The intern is expected to, generally, be available on:

At its next meeting on poverty, the Sparrow Coalition plans to discuss the impact of the Illinois state budget stalemate on some area social s…

Social workers to discuss experiences with poor and homeless

PBS video on San Francisco public library's outreach and employment of a social worker to reach out to those patrons who are homeless.

CARBONDALE — As far as Hanna Wichmann knows, there is no one in the greater Carbondale area actively seeking to offer mental health services t…

Wow! Huge meteor captured flying over the skies in England

Wow! Huge meteor captured flying over the skies in England

Shannon Butler, a graduate student in the SIU School of Social Work, is an intern at the Carbondale Public Library who is available to connect the homeless and low income people with resources to aid them in improving their lives.

Shannon Butler (left) talks with Diana Brawley Sussman, director of the Carbondale Library, at the library on Thursday morning. Butler, a graduate student in the SIU School of Social Work, is interning at the library and will be connecting the homeless and low income people with resources to assist them in areas such as applying for work and health care.