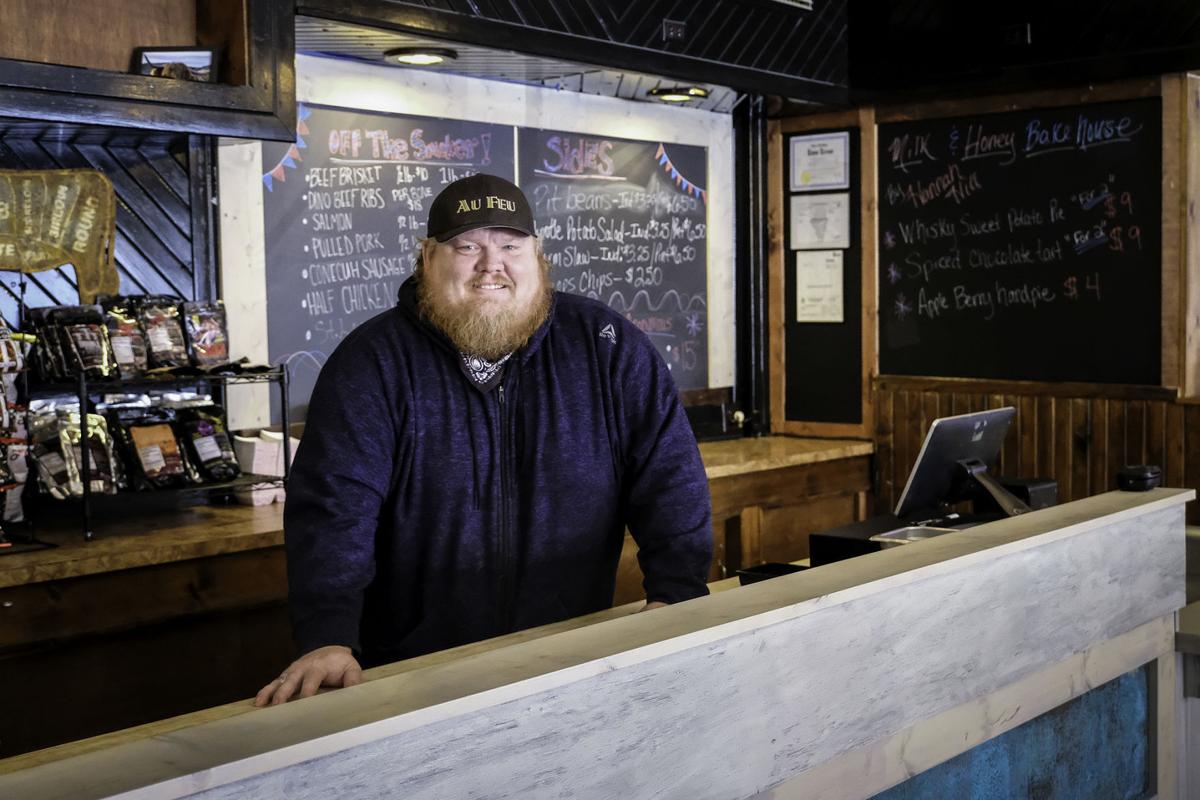 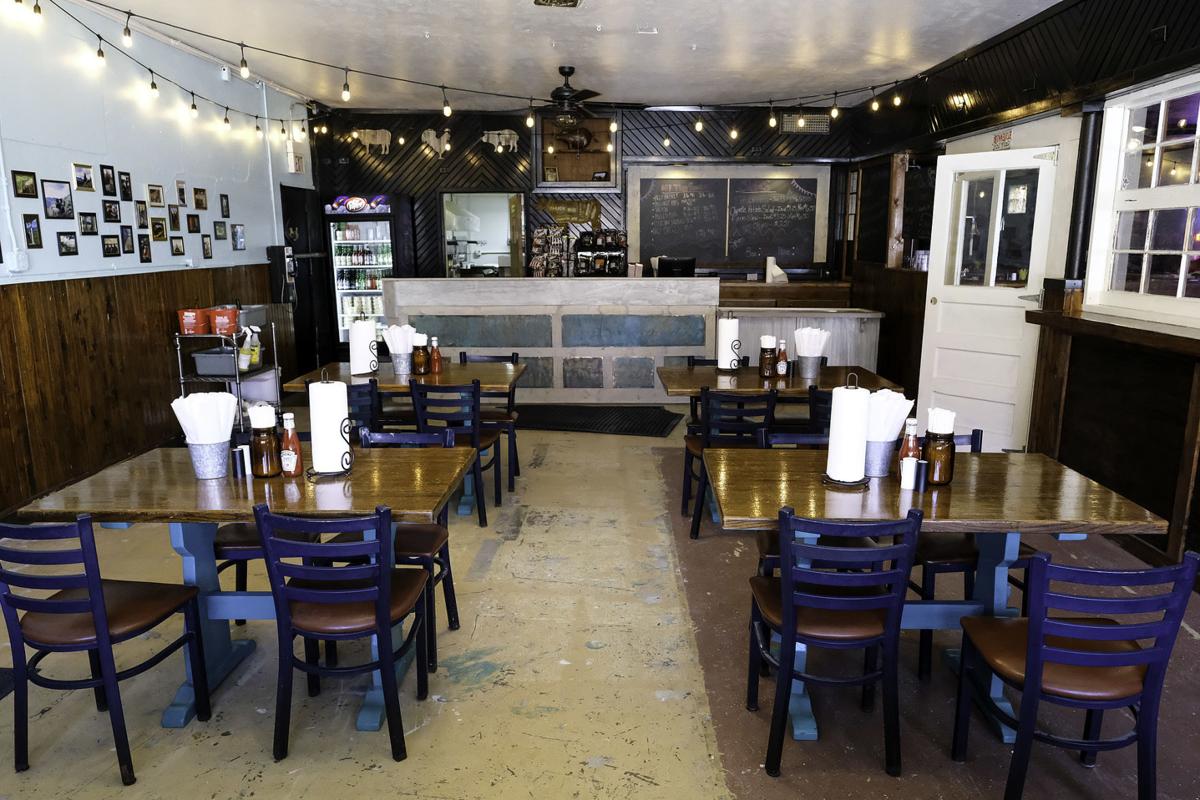 The new Salty Boar BBQ in Du Quoin will feature both inside seating and the ability to have orders to go, along with a bar area.

DU QUOIN — Chef Dylan Lipe is no stranger to barbecue. He worked as corporate pit master for Sweet Baby Ray’s and was on several barbecue competition teams, including the Barbecue Bus.

“Every time my whole family got together, it was either a barbecue or fish fry,” Lipe said.

Now, he and his partner, John Rednour Jr., are opening a new barbecue joint called the Salty Boar in Du Quoin.

Lipe said they wanted to create a restaurant and bar that was different. They want it to be the kind of place people feel comfortable taking their family or hanging out with friends.

“Du Quoin has a strong athletic tradition. I remember going places before and after games, like Alongi’s. Adults would go to the bar, and kids would head upstairs. I want to have that kind of place,” Lipe said.

Lipe said he remembers family trips to the Scuttle Inn, near Percy and Willisville. The restaurant had a menu and a bar, but also played host to events like barbecues or fish fries. Often, patrons would get together and cook on a weekend.

Families would eat. Then, children would play games while the adults had a drink in the bar. He wants the Salty Boar to be that kind of place.

The Salty Boar, at 17 W. Main St., was created to feel like it has been around for years. It has two sides — a restaurant and a bar divided by a wall of windows and swinging doors.

“The doors don’t match up, but they match up enough for us,” Lipe said.

The bar was in the building and features pennies enclosed in acrylic on its top. A fireplace in the bar was created with slabs of walnut from Anna. The counter the restaurant has been in the building since the late 1950s.

Pictures of farm animals in various countries are in the bar. The east wall of the restaurant is lined with pictures that share pieces of Lipe’s life and memories, like family pictures and even a photo of Lipe with his barbecue mentor, the late Mike Mills.

Lipe began working in restaurants working at the Dairy Queen in Du Quoin at the age of 16.

Lipe won a cooking competition while still a student at Du Quoin High School that came with a scholarship to the prestigious culinary program at Johnson and Wales University. He loaded up his car and headed toward Providence. On the second day of orientation, he was told there was problem with his financial aid package.

Lipe knew he could not pay for the program out-of-pocket, so he headed home. He left the university, but he did not leave his love of cooking behind.

Lipe went to Florida and worked for restaurants there,  then went from Florida to the Caribbean. A few weeks before the end of tourist season in the islands, a co-worker suggested he go back and get a degree in culinary arts.

He chose to get that degree at Rend Lake College.

The degree and his past experience led him to work in Chicago, where he opened a fried chicken restaurant.

Then the pandemic hit and closed everything down. He family spent about two-thirds of that time in their farmhouse in Southern Illinois.

Their 9-year-old son reunited with his cousins and fell in love with hiking and fishing, so the family decided to stay and open a restaurant.

The Salty Boar had a soft opening on April 17 that also served as a practice run. Lipe said he learned a lot and the customers left happy.

The Salty Boar will publish a limited menu on its Salty Boar Facebook page and website for Thursday through Saturday. Customers can order online beginning on Wednesday, then pickup orders at a pre-arranged time.

Lipe also is developing a small number of cold barbecue items to sell and warm up at home.

Community remembers activist Hugh Muldoon as 'champion of the voiceless'

Hugh Muldoon is being remembered for his tireless dedication to causes of justice, compassion and peace. Muldoon died Tuesday. He was 82.

Vernecelyn Allen, a Black female pilot, is a rarity — and trailblazing 'unicorn' for SIU aviation

Vernecelyn Allen does may not consider herself a trailblazer, but trying to find a better term to describe the SIU aviation graduate is futile.

COVID-19 in Southern Illinois: Here are our local counties latest case numbers from the Holiday Weekend

Ameren: Utility scams are on the rise. Here's how to avoid becoming the next victim.

Utility scams are on the rise in Southern Illinois and Ameren is offering customers advice on how not to be tricked.

Chris Parton of Midwest Music Supply has gone from toting mic stands as a boy to providing stages, lights and sound for events, concerts and NFL tailgates.

A SIU math professor and researcher accused of fraudulently obtaining $155,099 in grants has now been hit with additional charges from the fed…

LaSalle County Coroner Rich Ploch said the office received the results Wednesday, but he declined to comment on the report’s content “due to the ongoing investigation.”

Family and friends of Heath Toothman, 17, an Eldorado High School senior, are in mourning after his death Friday.

The new Salty Boar BBQ in Du Quoin will feature both inside seating and the ability to have orders to go, along with a bar area.