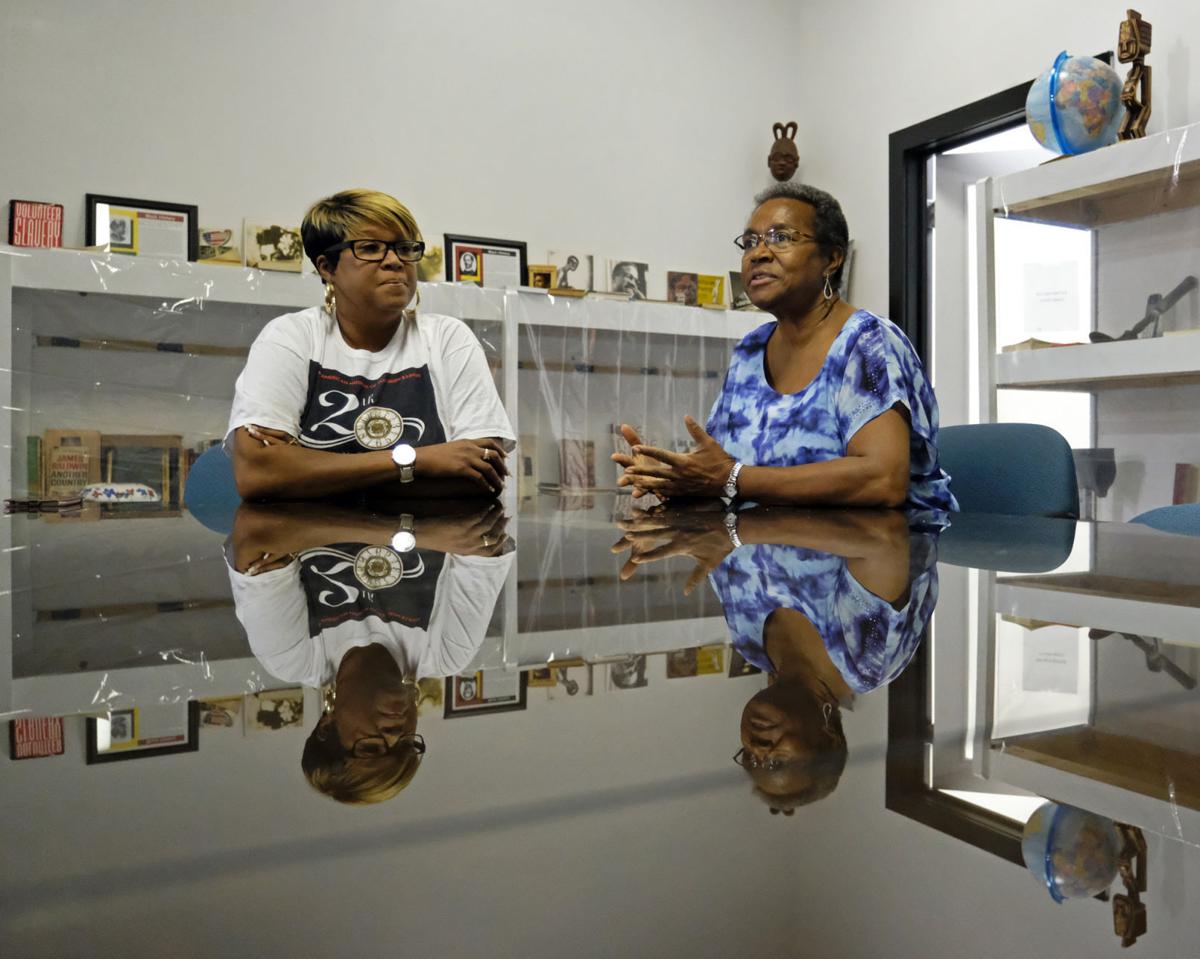 Board members Zenetta McDaniel Coleman (left) and Carolin Harvey discuss the history of the African American Museum of Southern Illinois on Thursday afternoon in Carbondale. The museum, located in the University Mall, is celebrating its 20th anniversary. 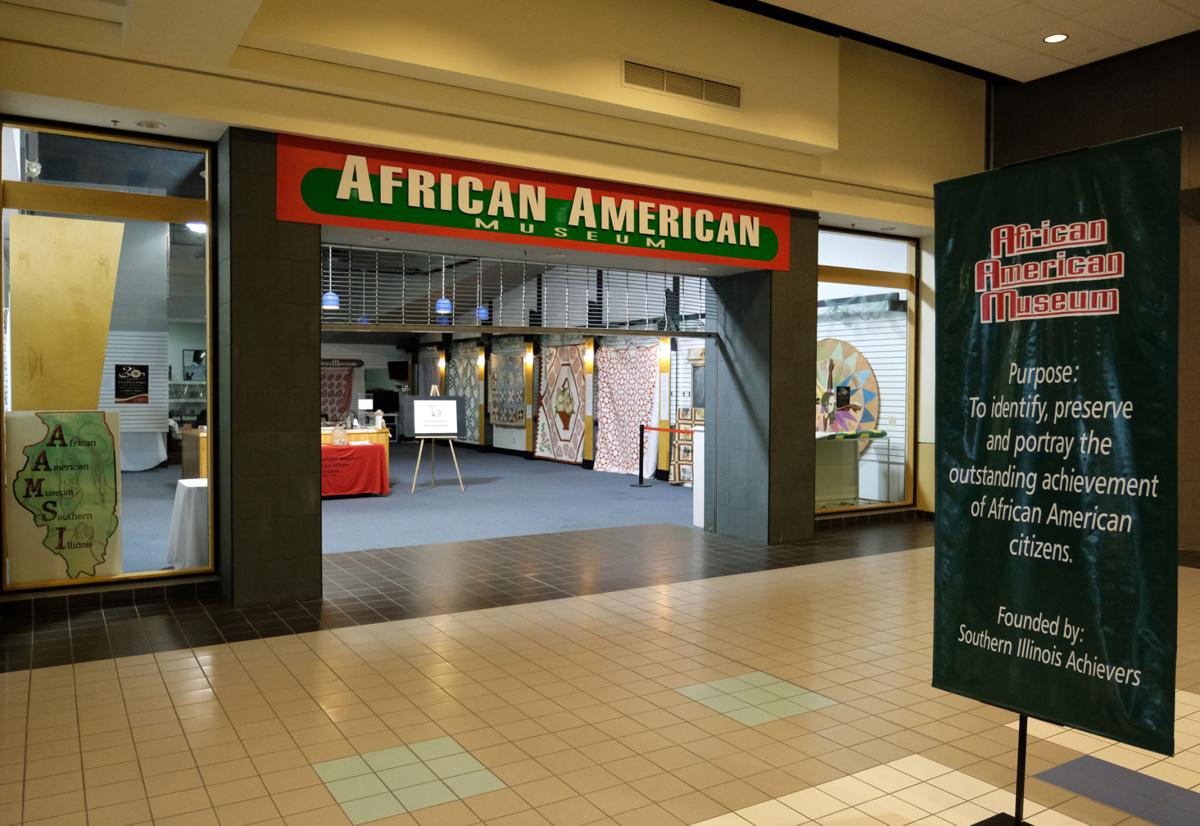 The African American Museum of Southern Illinois, located in the University Mall, is celebrating its 20th anniversary.

CARBONDALE — For nearly two decades, the African American Museum of Southern Illinois has celebrated the achievements of outstanding black citizens. Now it’s celebrating an achievement of its own.

“For an African-American museum, 20 years is a milestone, and it’s definitely a milestone for a museum in Southern Illinois,” said Carolin Harvey, board member and chair of the museum’s 20th Anniversary Celebration Committee.

The volunteer-run museum, located in University Mall near The Science Center, boasts an extensive collection of artifacts, from slave shackles and Underground Railroad message quilts to paintings by local artists.

Corene McDaniel became inspired to start the museum while reviewing applications for NAACP awards when she was president of the local NAACP branch. She was stunned by the accomplishments of some of Carbondale’s black residents.

McDaniel and her husband, Milton, decided they would start putting together photographs and artifacts related to local black history. They stored the items in boxes under their bed, and in 1997, they set up shop in University Mall.

Past board president Zenetta McDaniel Coleman, their daughter, joked that she “didn’t have much of a choice” in getting involved. When she moved back to Carbondale in 2007 after relocating to pursue a master’s degree, she became an active board member.

“I think cultural awareness is important, education is important, bringing attention to the history that is often lost,” Coleman said. “Growing up, honestly, not until there were some exhibits that were actually displayed in the museum and I took time to absorb them and learn about them did I know that members of my own community — church members that I’d gone to church with, teachers that were either my classroom teachers or teaching in my school, or the grandparents of people that I grew up with — did such magnificent things.”

Careful preservation of black history is one of the museum’s key tasks. But it also offers a number of programs geared toward engaging the community; Santa in the Park and the Juneteenth Celebration are among its annual community efforts.

This year, the museum began offering free workshops on the third Thursday of each month.

“We’re just trying to find issues that are relevant to all community members, but particularly the African-American community, things that we don’t necessarily really get to talk about — financial advisement, how to reduce your debt, how to secure a substantial and credible credit score,” Coleman said.

Their best-attended event this year, held in February, celebrated black couples who had been together for 20 years or more.

“Collectively we had 696 years of marriage in this one little room,” Coleman said. “… It was really good, because oftentimes we come together in times of sorrow. When you get a community like that together it’s typically because someone has been lost and you’re saying goodbye, that type of thing, but it was good to be able to celebrate the sanctity of marriage, the duration of marriage.”

Much of the museum’s programming is centered on engaging local youth. Teachers often bring their classes to the museum, and museum volunteers have given presentations in classrooms as far south as Cairo and as far north as Mount Vernon.

Learned Wednesdays is a youth enrichment program intended to keep kids busy with educational activities during the summer months; the program has taken kids fishing, horseback riding and on a trip to an archaeological dig.

The organization has also brought young people on excursions to civil rights museums in other states. One bus trip about 15 years ago took participants to several cities, including Birmingham, Alabama, and Chicago.

“We may not know it right away, but when you see those children later, they come up and hug you — ‘Do you remember when y’all took me (on that trip)?’ And that’s the payback, that’s the reward, and you think that you have done something that is gonna last with them, some sort of memory that they have. Like I said, it’s partly about instilling pride, and being able to pass that on,” Coleman said.

Black history, Coleman said, is not just for the month of February — and even then, it’s sometimes taught in problematic ways. She recently heard about a local teacher who summed up slavery as “when white people invited people from Africa to come over to help tend their gardens.”

“There’s not a set curriculum of what is talked about and what is not talked about. So I think the older that we get, and you hear these situations, there is reason for concern,” Coleman said.

Still, even in the museum, reaching kids isn’t always easy.

“I think that there’s a generation of kids — black and white kids — who are like, ‘Ugh, black history again? Enough already, we know about slavery, that doesn’t really have anything to do with me, you’re hitting me over the head with this.’ … We’re trying to kind of change that attitude toward history. Black history is American history,” Coleman said.

Harvey added that outside of history's major figures, every community has its own trailblazers.

“We all know black history: Martin Luther King, Frederick Douglass. There are millions of other stories that don’t get told. Millions,” Harvey said. “And to me, telling those other stories … I call them the nameless faces. All of those other people who contributed to whatever, who we never hear about — they all have a story, and that’s what we’re here for.”

‘Black history is for all people’

McDaniel said she is proud the museum has lasted this long, although she had hoped it would have its own freestanding facility by this point. The former Attucks High School building on East Jackson Street is intended to someday serve as its permanent home, but that building is in need of extensive repairs and remodeling.

“That’s still in the works, and hopefully it will be done before we celebrate 40,” McDaniel said.

She also hopes to see the museum strengthen its volunteer base. It currently has no active volunteers outside of board members.

“We need more involvement from the community. Like we say, black history is not just for black people; black history is for all people, and it’s the educating of what has happened to a certain group of people. We’ve had some young white members who have been very instrumental in helping us stay on as long as we have,” McDaniel said.

The museum will celebrate its 20th anniversary on Sept. 23 at the Carbondale Civic Center with a fundraising dinner called “An Eve of Timeless Elegance.” The event will feature a cocktail hour, a dinner catered by Great Boars of Fire, music by The Phonics, spoken word by poet Samuel Hawkins, dancing and a silent auction.

Tickets to “An Eve of Timeless Elegance” cost $50 per person and must be purchased in advance. Sponsorships are also available. For more information, call Carolin Harvey at 618-303-1973.

Board members Zenetta McDaniel Coleman (left) and Carolin Harvey discuss the history of the African American Museum of Southern Illinois on Thursday afternoon in Carbondale. The museum, located in the University Mall, is celebrating its 20th anniversary.

The African American Museum of Southern Illinois, located in the University Mall, is celebrating its 20th anniversary.