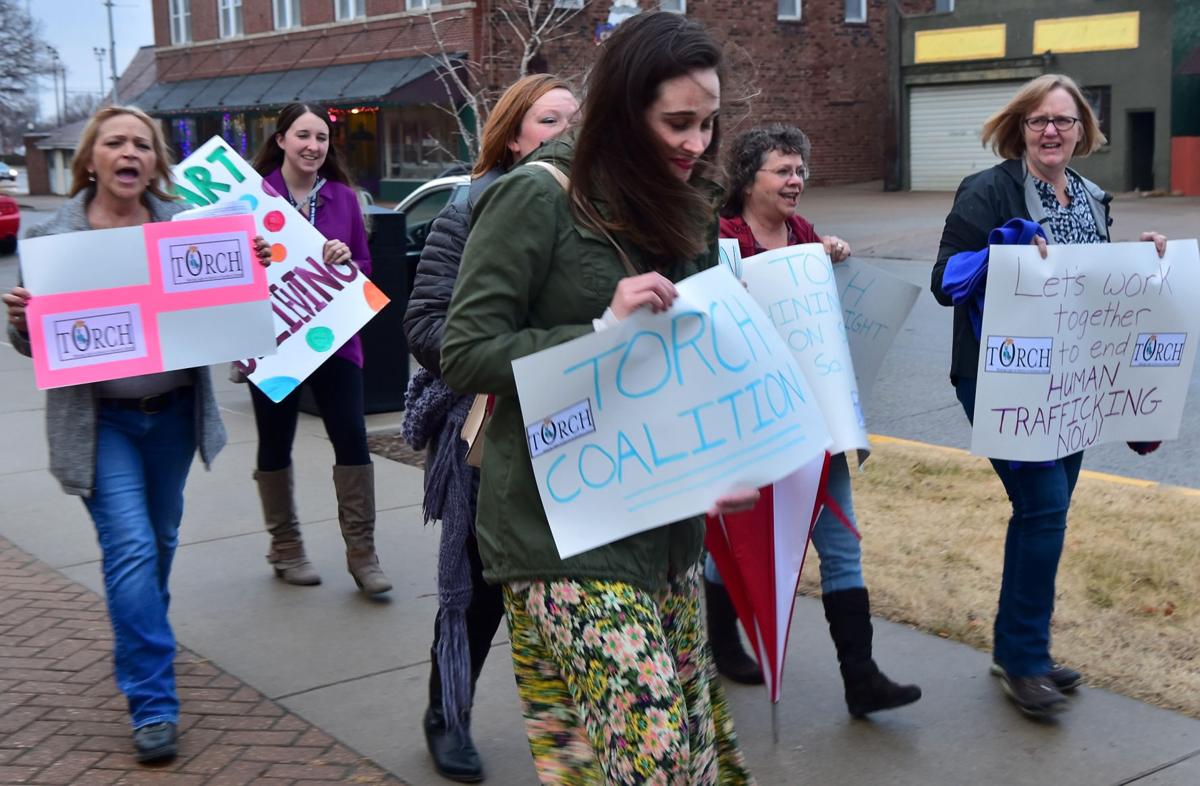 Rain did not stop participants marching to raise awareness on human trafficking. The march started at the Carbondale Civic Center on Thursday. 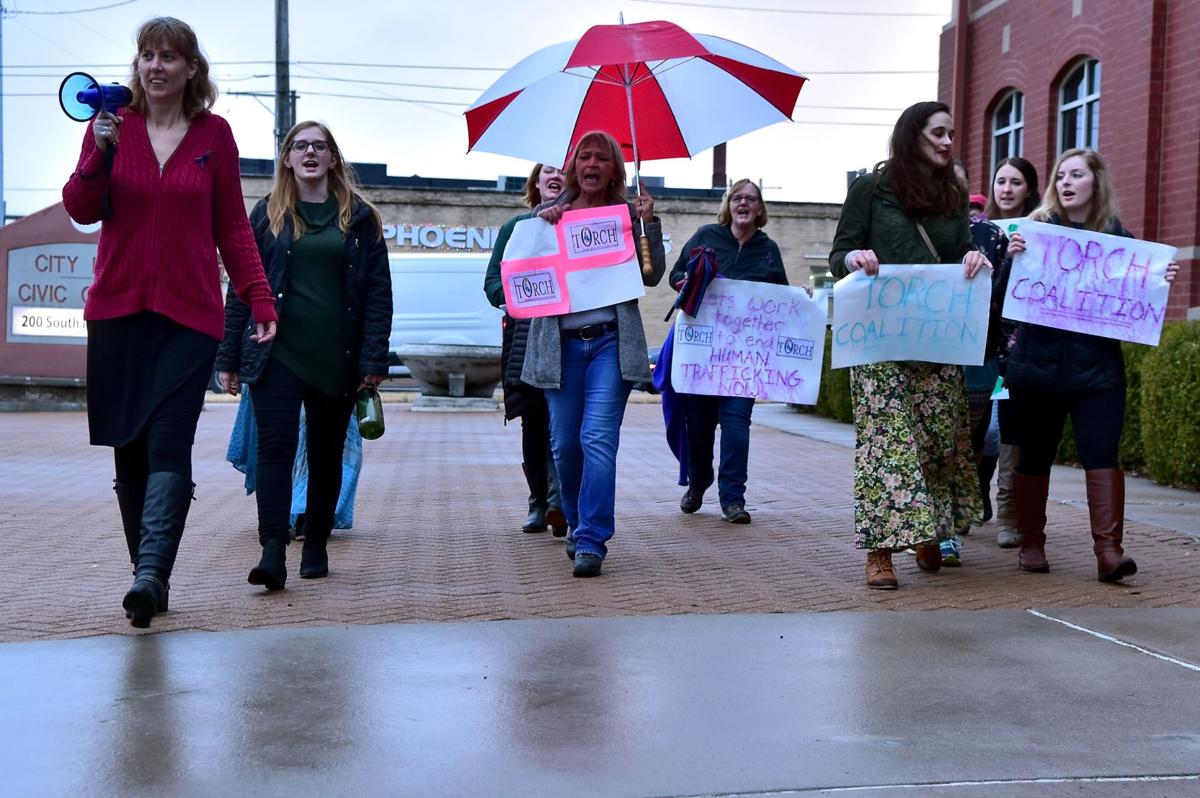 Laura Van Abbema (left) leads marchers in chants as they conclude a march to bring attention to the issue of human trafficking. The march began and ended at the Carbondale Civic Center on Thursday, followed by speakers making presentations on the issue at the center.

CARBONDALE — A group of about 25 people gathered in the rain Thursday afternoon to march the streets of downtown Carbondale in an effort to raise awareness about human trafficking.

The march was organized by a group known as The Torch Coalition. The organization was developed in November after The Keys to Freedom Conference at John A. Logan College, meant to combat human trafficking.

“It takes place every single day,” she said.

Quoting the National Human Trafficking Resource Center, she said human trafficking is the second largest source of illegal income worldwide — second only to drug trafficking. She said it is a $32 billion industry.

According to numbers from the resource center, trafficking happens in strip clubs, hotels, massage parlors, nail salons, truck stops and through online advertisements. In Southern Illinois, websites like backpage.com feature advertisements for online escort services and feature transactions that are cash only.

Statistics from the resource center reveal that since 2007, there have been 4,032 calls and 1,054 total cases regarding human trafficking in Illinois. Additionally, there have been 1,369 victims statewide in that same time frame.

In 2017, through June 30, there were 289 calls and 100 trafficking cases reported, the center reports. Of those cases, 75 were sex trafficking and 15 were labor trafficking. Those cases involved 83 women and eight males, and 57 were adults, while 32 were minors. Additionally, 28 of those individuals were U.S. citizens and 19 were not U.S. citizens.

The center says the statistics are noncumulative, as cases reported do not always have all the information reported.

“In all honestly, many cases go unreported,” Orr said. “Simply because … people are unaware that this happens and we don’t know how to identify it.”

She said when the topic of human trafficking comes up, she is commonly asked if it even happens in Southern Illinois.

“It happens anywhere and everywhere there is demand for the second-most profitable product in the world,” she said.

Orr said Southern Illinois is an ideal location for trafficking because of its proximity to St. Louis and Chicago. She said in 2005, the FBI designated Chicago as one of the 13 locations of highest-intensity child prostitution. In 2003, the New York Times called Chicago a national hub for human trafficking.

She said those at risk aren’t just the people from big cities. Those at risk are those who came from a background with a broken family system, the homeless, the LGBT youth who have been kicked out of their homes and the children in the foster care system. These aren’t the only people, but just a few instances, she said.

“Trafficking isn’t just a big city problem,” she said. “It is a local problem.”

Orr said traffickers target the vulnerable by deceiving them, making them feel trapped and breaking them down mentally. She said these victims become a product for the trafficker.

“What is so lucrative and attractive to these pimps is you can only sell drugs to a customer one time, but you can sell this product over and over and over again,” she said.

The keynote speaker of the event was Trisha McKnight, an author and trafficking survivor from Breese. She told her story of survival growing up in Freeburg becoming a victim at 13 years old.

McKnight said victims just don’t wake up one day and are in the trafficking world. She said it is usually somebody very close to the victim who has the power to control their world.

She said people can’t just let warning signs go unreported. Somebody saying anything could have the power to help.

“The act of human trafficking doesn’t just happen. It has steps,” McKnight said. “We need to change our everyday way of thinking about these offenses. And what we have learned to tolerate and dismiss.”

CARBONDALE — U.S. Rep. Mike Bost has supported a trio of human trafficking bills that, if approved, would provide more resources for health de…

CARBONDALE — Illinois ranks eighth in the nation in the number of cases of human trafficking, which includes many child victims. Yet, an overw…

Hundreds gather in Carbondale to march for human rights

CARBONDALE — During the clamor of a very rough, loud election cycle, Karen Linduska, of Carbondale, found solace at Mount Rushmore.

Rain did not stop participants marching to raise awareness on human trafficking. The march started at the Carbondale Civic Center on Thursday.

Laura Van Abbema (left) leads marchers in chants as they conclude a march to bring attention to the issue of human trafficking. The march began and ended at the Carbondale Civic Center on Thursday, followed by speakers making presentations on the issue at the center.