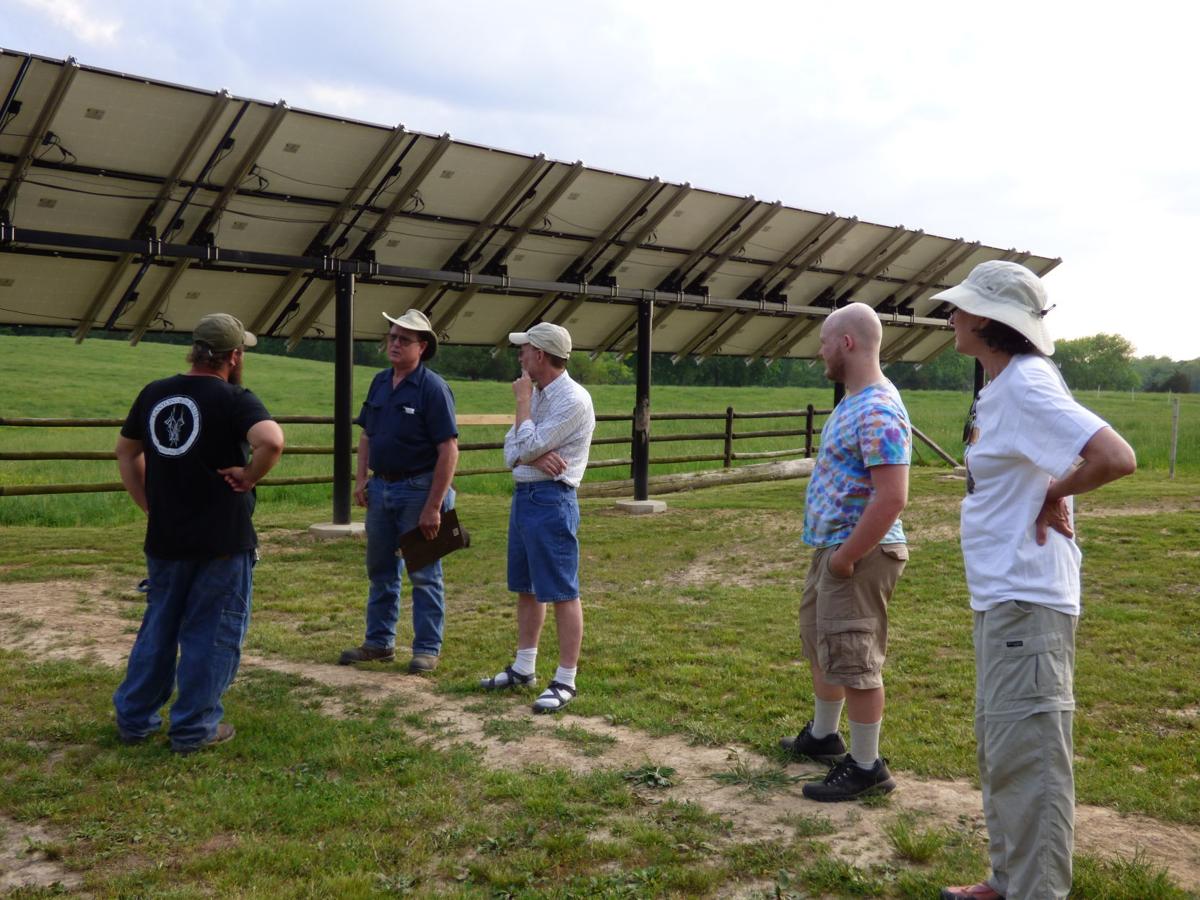 Randy Jones (second from left) talks during a farm tour on Monday about a solar energy project installed on his Marion farm in December. 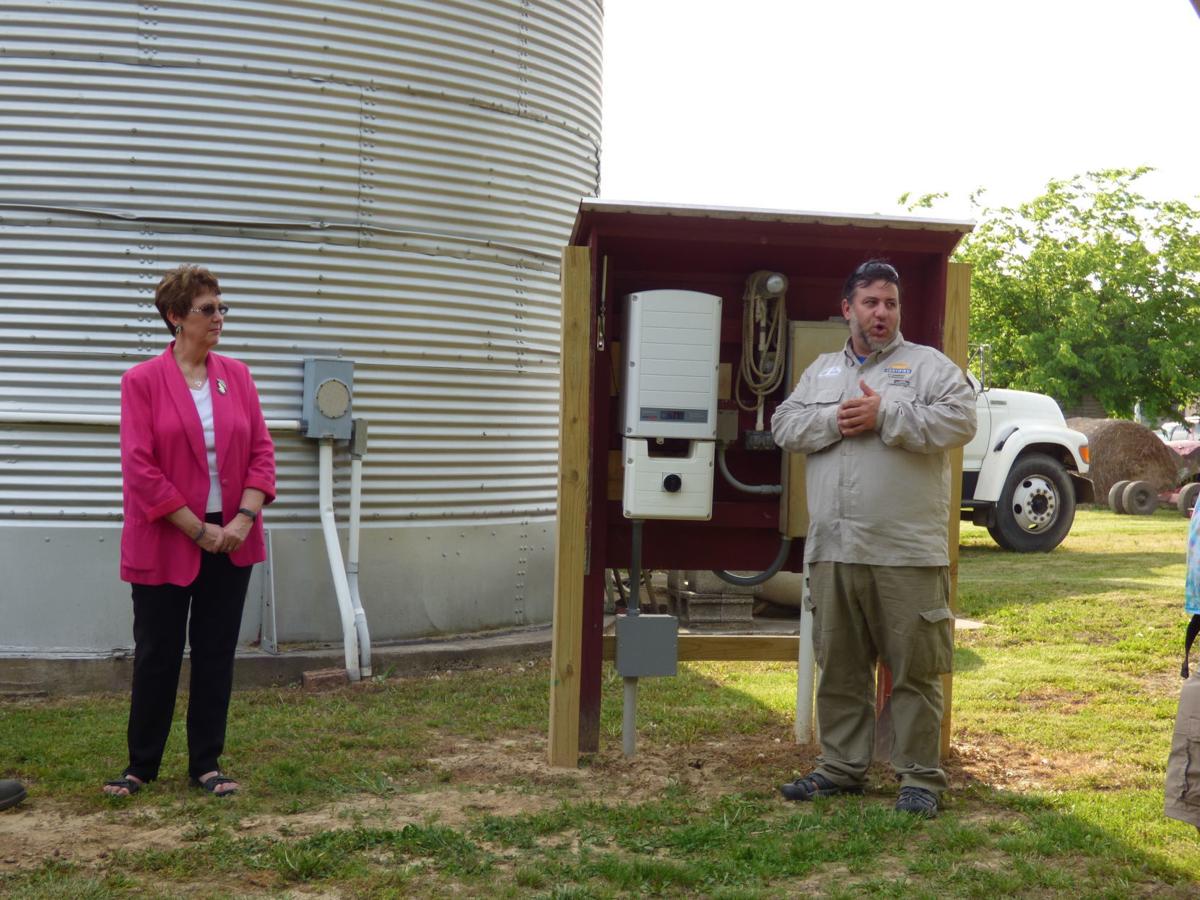 Gail Jones (left) listens to Aur Beck of AES in Carterville talk on Monday evening about a solar energy installation on the Jones Farm in Marion. 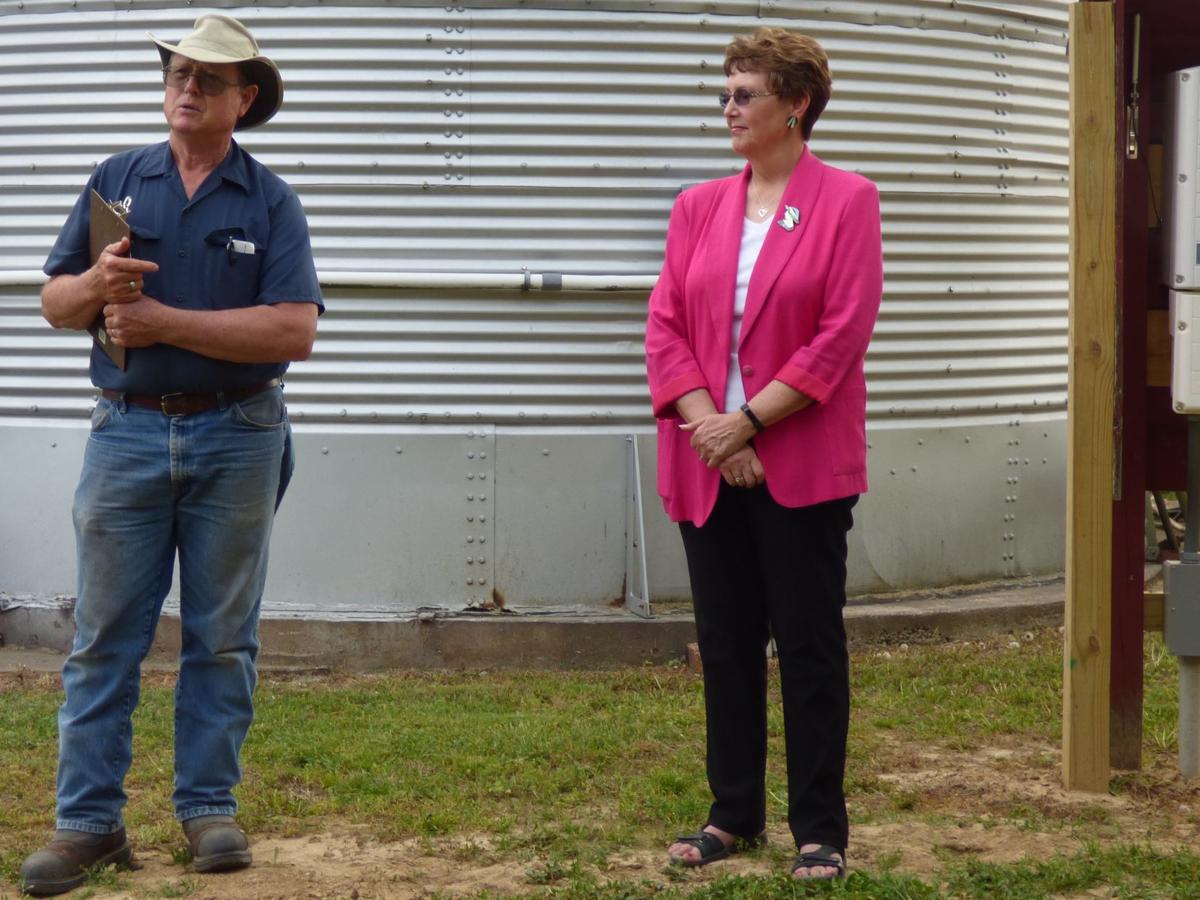 Randy (left) and Gail Jones talk in May about their use of solar energy on their Marion farm during a tour hosted by SI Farming Alliance and AES.

MARION — Southern Illinois Farming Alliance and Advanced Energy Solutions in Carterville hosted a solar energy field day Monday. The field day began with a tour of a farm owned by Randy and Gail Jones south of Marion that is using solar energy to help power the farm.

The couple married and moved to the farm in 1973. Through the years, they couple has made several improvements to the farm to help conserve energy or, as Randy puts it, “to pay the electric company as little as possible.”

They replaced a coal-fired heat system in their home, going to all-electric, then insulating the house. They transitioned to a wood-burning heating stove, then geo-thermal system.

They have made similar changes to the farming operation. They have installed solar-powered electric fences and solar panels on a barn to help heat their workshop.

“My father-in-law was in the solar energy business,” Randy Jones said.

About 10 years ago, Randy and Gail Jones began talking about a more substantial solar project to help produce electricity for the farming operation. The couple now has a beef cattle herd of about 25 head, and grows grain to grind into food.

Randy Jones said the idea is to keep from buying coal-fired electricity and to use natural electricity powered by the sun every day. Illinois offers good tax incentives to switch.

“For me is was like buying a tractor,” Randy Jones said.

The solar installation at the Jones farm is a 10 kilowatt system that has 30 solar panels and a heavy-duty, off-ground mounting system. The project cost about $40,000. The system went on in December 2017.

“It doesn’t run the farm. It runs a very small percentage of everything we use,” Randy Jones said.

Gail Jones has been monitoring their electricity bill.

“I look at the bill. Our electricity has gone down some,” Gail Jones said.

They also produce electricity for the grid.

“They pay us back less per kilowatt than we pay them,” Randy Jones said.

The couple looked at another solar installation model that is installed closer to the ground.

“I like this setup better. Being a cattle farm, there’s always a chance cows are going to get loose,” Randy Jones said, adding that their bull likes to knock things down.

Besides being high enough and heavy enough to withstand cattle, the system is wind-resistant to 90 miles per hour. The height makes it easy to mow under and around, too.

Aur Beck, founder and chief technician of AES, said the couple installed the best equipment he sells. In addition to the heavy-duty mounting system, they also wanted American-made solar panels. He explained that the solar panels have a 25 year warranty, and the converter has a 15 year warranty.

“It can be pouring rain, and it will still be producing energy,” Beck said.

“It can be a full moon and produce energy,” Randy Jones said.

Beck explained that it does not produce a lot of energy in either case, but it still does produce some. It produces a lot more on bright, sunny days.

In this particular project, the rainy fall weather slowed installation, plus it takes six to seven weeks to get the heavier rack and mounting system.

“It installs in two weeks once the rack is set,” Beck said.

In addition to the 136-acre farm south of Marion, the couple owns a 250-acre grain farm near Herrin.

After the farm tour, the group went to AES in Carterville for a potluck dinner and presentation.

Carol Iaccino, executive director of sales for AES, explained how the process works from first contact to installation. She also explained incentives available to residential and business customers who choose to install a solar system.

Randy Jones (second from left) talks during a farm tour on Monday about a solar energy project installed on his Marion farm in December.

Gail Jones (left) listens to Aur Beck of AES in Carterville talk on Monday evening about a solar energy installation on the Jones Farm in Marion.

Randy (left) and Gail Jones talk in May about their use of solar energy on their Marion farm during a tour hosted by SI Farming Alliance and AES.