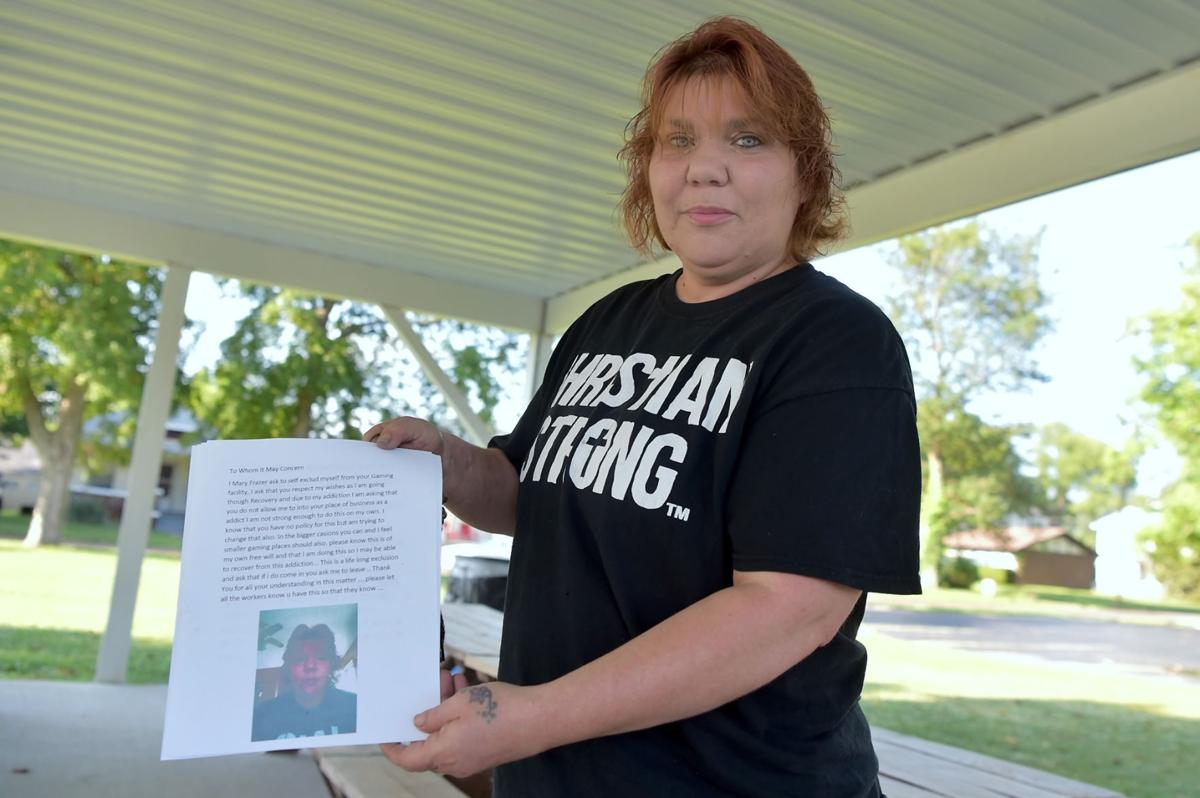 Mary Frazer holds a paper that self-reports that she has a gambling addiction. Hatton, shown in Murphysboro Thursday, leaves the message at establishments where she used to gamble so that if she has relapse they will know and will not allow her on the premises. Self-reporting and working to get others to do the same is just one of many ways Hatton is helping others. 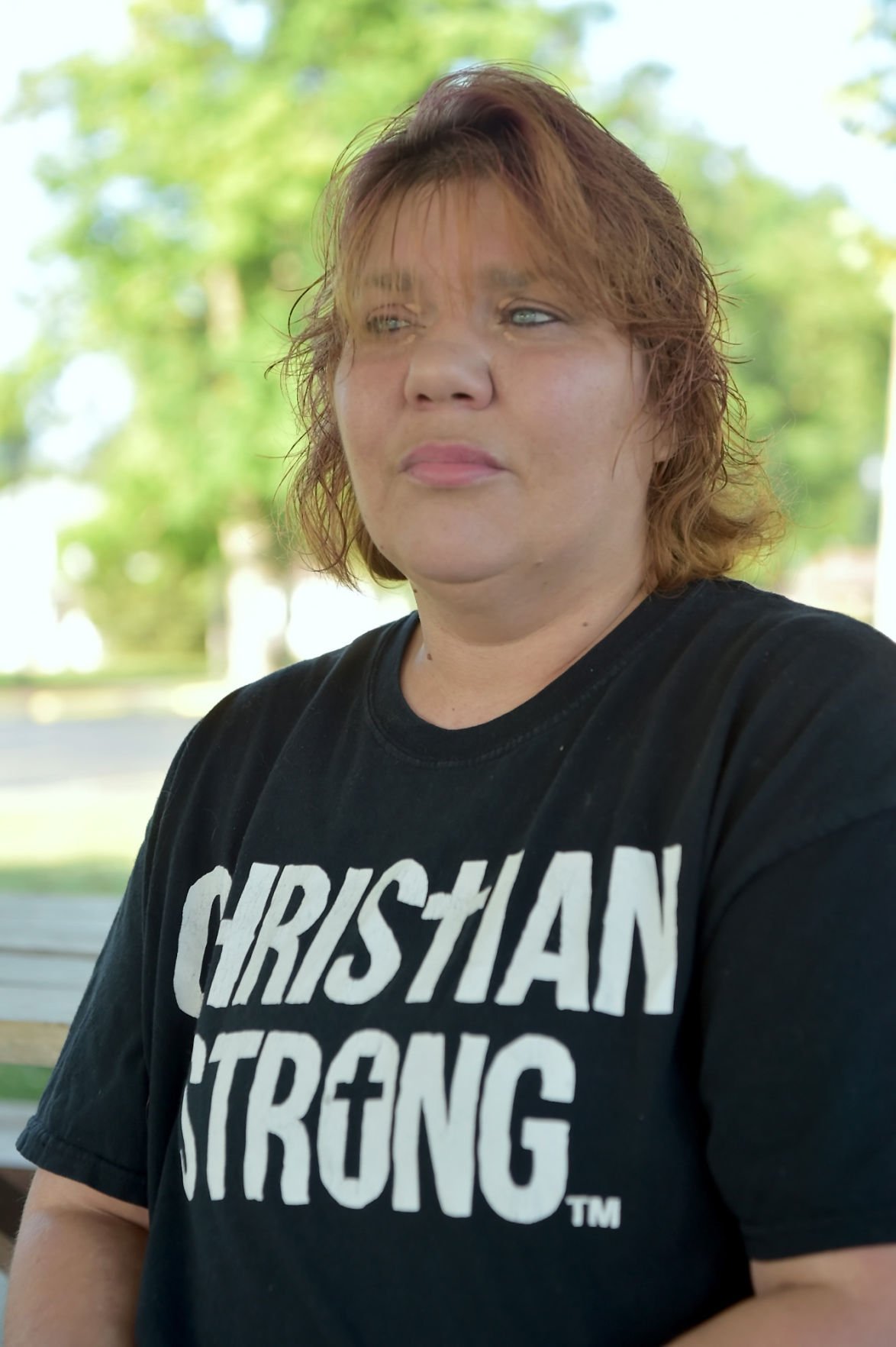 MURPHYSBORO — In about 2014, Mary Frazer became aware that she knew almost every establishment between Southern Illinois and St. Louis with video gaming.

With that awareness, she realized that if she did not stop visiting these gambling sites, she was going to lose everything — including her family, which included her eight younger children.

She took advantage of a system she'd heard of, a self-exclusion policy, in which a person willingly decides to ask gambling-establishment managers to forbid them to come in. By doing this, the person agrees that the business managers may have them arrested or otherwise removed from the property, possibly charging her with trespassing.

Frazer, who recently started a Gamblers Anonymous group at United Methodist Church in Murphysboro, would like to introduce the notion of self-exclusion to local businesses that have video-gaming terminals and to people who are struggling with an addiction to gambling.

She said she has already reported herself to three Murphysboro establishments with video gaming, asking them to turn her away if she shows up to gamble.

Their management was understanding and empathetic, she said.

The responsibility for self-policing

Why should an establishment bear the responsibility of policing adults with their gambling issues?

Because self-exclusion works, Frazer said. If someone struggling with a gambling addiction goes to a place where they have selected to self-exclude themselves as persona non grata, they could experience embarrassment when the management, police officer, bouncer or other authority figure tells them they have to leave.

That, Frazer said in her experience, is a powerful deterrent.

"(Most) won't go back because they don't want the embarrassment," Frazer said.

A 2010 report that examined the self-exclusion programs noted that they were a growing trend that started in Missouri.

"Enrolling in a self-exclusion program is a form of help-seeking behavior, akin to attending a Gamblers Anonymous meeting or entering talk therapy," Glenn Christenson, then the chairman of the National Center for Responsible Gaming, wrote in an intro to the report. "Because most people struggling with addiction, including those with disordered gambling, do not seek external help, it is vital for scientists, health care providers and policymakers to understand what motivates the people who do seek assistance. …"

Based on research from 2010, self-exclusion works, said Christine Reilly, senior research director with the National Center for Responsible Gaming in Massachusetts.

She said the concept could be used as part of a "cocktail therapy" approach to dealing with gambling addiction, an approach that could also include medical treatment, counseling and talk-therapy, among other means.

“Based on what we know from the research, it is safe and can be effective for some people, not all,” Reilly said. “You should not load the program with great expectation.”

Frazer might not be too far off, according to information from the Illinois Gaming Board's office on self-exclusion.

The Illinois Gaming Board has submitted proposed rules on self-exclusion in establishments with video-gaming to the Joint Committee on Administrative Rules, or JCAR, said Gene O'Shea, director of the state's self-exclusion program. He said that process of approval would take some time, as it took time, two years, to approve the state's casino self-exclusion rules. The public, he said, will have a chance to respond to the proposed rules once the Joint Committee on Administrative Rules makes them public.

Since the state adopted its casino gamblers' self-exclusion policy in 2002, some 12,651 people have registered to exclude themselves from the state's 10 casinos. There have been 4,317 arrests, with gaming officials seizing $1,958,293.43 in seizures from those who previously self-excluded, O'Shea said.

Within the past week, authorities arrested a woman who had abandoned $16,000 she won in summer 2016 at Casino Queen. She had returned to that casino, where she had self-excluded herself, and been arrested. The most seized at one time was $23,000, O'Shea said.

Notes on the issue locally

According to the Illinois Gaming Board, there are a handful of Southern Illinois cities and villages where video gaming is not allowed or has limited use.

Baldwin in Randolph County and Campbell Hill in Jackson County do not permit video gaming at licensed truck-stop establishments.

Some don't allow it at all: De Soto, Elkville and Makanda in Jackson County; Brookport in Massac County; Bush, Cambria and Colp in Williamson County; Cave in Rock in Hardin County; and Karnak in Pulaski County.

It is, however, allowed in Murphysboro and nearby Carbondale.

Carbondale's 88 video-gaming terminals, in 20 establishments, netted $3.016 million this past year, with $150,806.88 going to the city. (Carbondale has a cap of 100 video gaming terminals in the city, according to the Illinois Gaming Board website.)

Murphysboro's 39 video-gaming terminals, in eight establishments, netted $1.328 million this past year, with $66,443.90 going to the City of Murphysboro.

Addressing an issue, filling a void

Two weeks ago, Frazer held her first meeting of Gamblers Anonymous, a 12-step program that attracted three people — she's hoping for many more. Though the program stresses anonymity, Frazer said she is publicizing her identity and struggle to help others facing the challenge in this area. She said those who struggle with gambling addiction face many challenges, including stress and broken marriages and families, money and job loss and even suicide.

In an online group that she is a part of, she says nine people, unable to find ways to deal with their gambling addictions, have taken their own lives in the past six months.

Murphysboro Mayor Will Stephens said he hasn't heard of gambling being a problem in the city.

"Although gambling brings with it certain challenges for individuals with addictions, the city council has not heard any complaints about video gambling in bars, fraternal organizations, or video gaming parlors," Stephens shared in an email to The Southern.

"I think Mary is on the right track," Stephens wrote. "It will allow her to establish relationships with those business owners, and allow her to better accomplish her goal of helping those who need help. Mostly because it will be the business owners who will most easily be able to identify problem gamblers."

Now that she's no longer gambling, Frazer said she is filling that void with a transportation business she and her husband have established.

They provide rides, to and from work, for people who frequently work for some local employment agencies and don't have their own vehicles.

"What I'm doing is helping families that don't have transportation (so) they can get to work," she said.

Additionally, she noted, "My house is more in order."

MURPHYSBORO — Will Stephens, the mayor of Murphysboro, has been selected to the sixth class of Edgar Fellows, a group culled to help inspire "…

Mary Frazer holds a paper that self-reports that she has a gambling addiction. Hatton, shown in Murphysboro Thursday, leaves the message at establishments where she used to gamble so that if she has relapse they will know and will not allow her on the premises. Self-reporting and working to get others to do the same is just one of many ways Hatton is helping others.