Become a Member
Read Today's E-edition
Share This
Black drivers twice as likely to be pulled over in Herrin, data shows; cops benefit from towing fees
3 comments
Share this 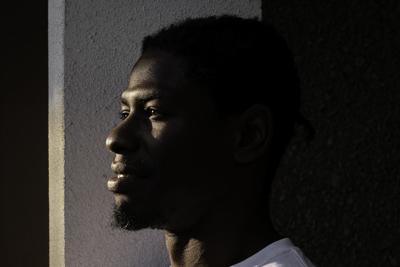 HERRIN — Last year, Black individuals driving in Herrin were 2.1 times more likely than white individuals to be pulled over for a traffic stop, according to an analysis by The Southern of Herrin Police Department data.

Herrin police did not respond to a request for comment on these statistics.

After being stopped for a busted taillight, Kiveon Crawford, a Black Herrin resident, made headlines in late August after police dash cam video and cellphone footage surfaced of his interaction with police.

Ultimately, his vehicle was towed from his own driveway and he says he had to pay $540 to get it back.

Crawford, who was pulled over the night of Aug. 28, said he was racially profiled and mistreated during the stop. Videos of the encounter show police repeatedly using a stun gun on him for allegedly not complying with officers’ commands and putting his fiancée in handcuffs while Crawford’s four-month-old baby can be heard crying in the car.

After Crawford’s arrest, they towed his car and police deny Crawford’s claims that they also searched his fiancée's SUV.

Tad Thompson, deputy chief for the department, said towing a vehicle is standard practice when there is an arrest.

He said officers were following procedure by towing the vehicle.

“The vehicle was towed incident to Mr. Crawford's arrest which is standard procedure and the officers were simply following that procedure and that applies no matter where the vehicle is parked,” Thompson said.

Ed Yohnka, director of communications and public policy for the ACLU of Illinois, said in an interview with The Southern that the towing of Crawford’s car seems excessive.

“The reason you tow a car after you arrest somebody for a traffic offense is because you don't want to leave the car out to be a traffic hazard. It's clearly not that in his driveway,” Yohnka said. “So it does feel a bit punitive and, and a little bit coercive to have gone ahead and done that.”

Jonathan Kibler, a partner attorney with the Southern Illinois Law Center practicing criminal defense, argued police tows are often fee-generators or a method to “bootstrap the police” into a vehicle search that would not otherwise be authorized by the Fourth Amendment, which protects people from unlawful searches and seizures.

“Police tows can also be a coercive measure to punish individuals for their perceived non-compliance with police,” Kibler said.

Herrin police did not respond to requests for comment on Yohnka and Kibler’s criticisms.

Under city ordinance, police can tow vehicles of suspects if the vehicle is being used in a crime; the driver is under the influence; a felony or misdemeanor has been committed; a license or permit has been revoked; if the driver has an active warrant, or for traffic violations or eluding arrest.

The money from towing these vehicles goes into a restrictive revenue account to purchase police vehicles and equipment, according to city ordinance.

Kibler said it is not unusual for police departments to impound vehicles. However, he said the Crawford case is unique because his vehicle was towed from his driveway, where it was not a threat to traffic.

According to Judici, an online courts record database, Crawford was only charged with a traffic offense, prompting Kibler to wonder why the vehicle was towed.

“It’s been my experience in my practice in observing not only my cases, but my partner's cases and other attorneys’ cases, that certain local police agencies seem anecdotally to do more police tows out of minor traffic stops than others and that causes me some concern because it also seems anecdotally like that disproportionately impacts minorities,” Kibler said.

Activists in the community are concerned that the stop and the behavior of the officers involved was racially motivated.

Black Lives Matter demonstrators gathered Sept. 9 in Herrin to protest the department’s treatment of Crawford. Outside of City Hall, they were met by counter-protesters — some of whom were carrying “Blue Lives Matter” flags and others wearing “Proud Boy” shirts. The “Proud Boys” represent a national white supremacist hate group whose members took part in the Jan. 6 insurrection.

Dash camera footage, dated Aug. 28 and released by Herrin police, shows 28-year-old Crawford driving his car through a neighborhood before pulling into his driveway, where he and his fiancée, Cabrenna Roberts, exited the vehicle.

Crawford was charged with a traffic violation and the arresting officer on record was David Loucks, according to Judici, an online courts record database.

A statement released by the department on social media said the reason for the initial stop was that there were no tail lights illuminated on Crawford’s vehicle.

Crawford argues his lights were on. The vehicle was a new 2021 Toyota that he just got on Monday and the lights were automatic, he said. In the video, officers can be heard repeatedly telling Crawford and Roberts to get back into their vehicle.

Crawford said in an interview with The Southern that he didn’t hear the officers at first because he didn’t have his hearing aids in and he is partially deaf.

“I have a disability. I didn't have my hearing aids in, my hearing aids is right now getting fixed at the moment, and they should be back soon,” Crawford said in an interview with The Southern.

According to the video, Crawford asked why he was being pulled over and explained he exited the vehicle because he just had a vasectomy. In the video, he complained of soreness post-surgery.

Crawford and Roberts repeated this multiple times throughout the body camera footage provided by Herrin police and in their own cell phone video recordings provided by Roberts.

Once Crawford refused again to get back in the car, an officer approached him and said “Alright,” according to video footage.

Crawford again explained he is standing with one leg on the seat to talk to officers because of his vasectomy. The officer then begins to cuff him and arrest him.

“Hey I got my baby in the car right there,” Crawford told the officer, referring to his four-month-old infant in the back seat of the vehicle.

The video appears to show the officer wearing a black wristband with a blue line in the middle of it — popularly symbolic of the “Blue Lives Matter” movement.

When the officer asked for Crawford’s other hand to finish cuffing him, Crawford is seen in the video actively reaching for his cellphone while asking for a moment to call his brother. The baby can be heard crying in the background and the officer told Crawford to relax and put his hands behind his back.

“Put your hands behind your back you’re going to get (stunned with a Taser),” the officer said, according to the video, before requesting other officers on scene to move in for backup.

Two officers can be seen holding Crawford’s arms out and pinning him against the car while another runs onto the scene and uses a Taser on him from behind, and Crawford goes to the ground, the video shows.

While on the ground, police can be heard stunning Crawford with a Taser again, according to the video.

“He didn’t do anything but pulling over to the house,” Roberts can be heard saying on video as she recorded the interaction on her own cell phone.

Police then took Roberts’ cell phone from her while her hands were placed behind her back to be cuffed.

“Don’t make it seem like I’m resisting because I’m not. I’m not resisting,” she said.

The officer says something inaudible, to which she responds, “My daughter is in the car.” Roberts was not arrested; she was only detained.

After being placed in the back of the car, Crawford said an officer again asked him why he had been pulled over. Crawford said “Because I’m Black,” to which he said the officer allegedly responded, "That’s it. I’m taking you to jail," and took him to the station.

Herrin police has defended the officers’ actions during the traffic stop.

Thompson additionally defended the officer’s actions in an email to The Southern.

“No, I do not feel excessive force was used to effect the arrest,” Thompson said. “If Mr. Crawford had simply followed the Officer's lawful commands, whether or not he agreed with them (sic) NO force would have been necessary nor used.  It truly is our hope that no one resists arrest and in a perfect world, we would never be put in the position to have to use any amount of force to make a lawful arrest.”

Police are offering a $1,000 reward for information.

Watch now: Cop wrestles teen girl to the ground for alleged trespassing, refusing to ID herself

CARBONDALE ― A viral video with more than 10,000 views and hundreds of recent shares on social media shows a Carbondale officer attempting to …