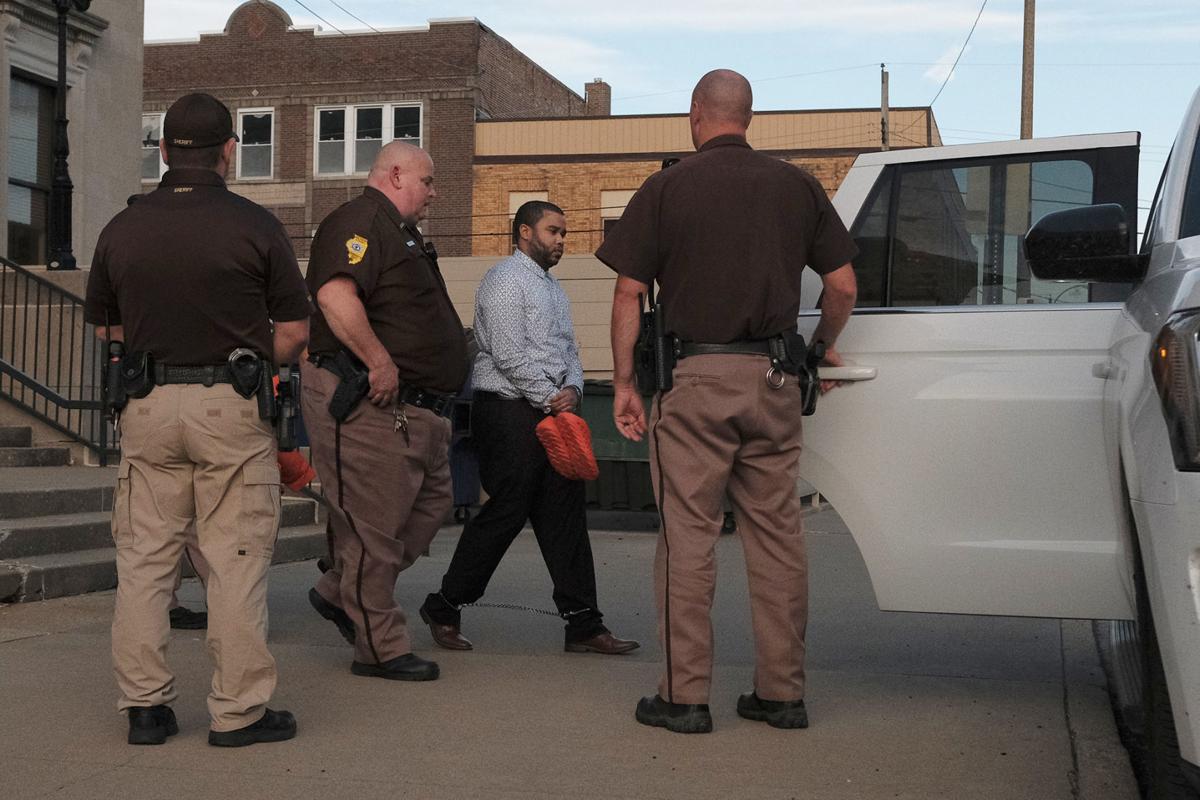 Jody Pullen Jr. is taken from the Jackson County Courthouse on Wednesday after being found guilty on all counts in his attempted murder trial. 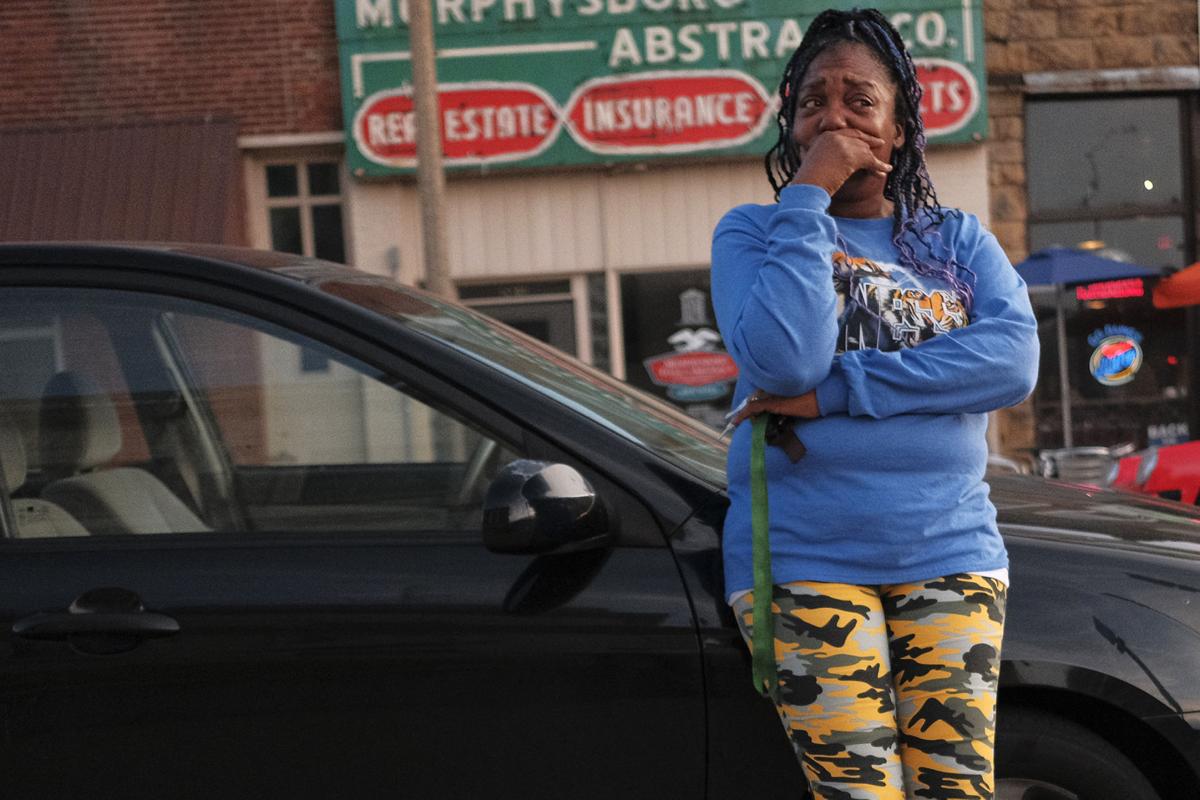 Avenya Davis waits for her nephew, Jody Pullen Jr., on Wednesday in Murphysboro after he was found guilty of attempted murder and other charges.

MURPHYSBORO — After deliberating for about 90 minutes Wednesday, a jury found Jody Pullen Jr. guilty in his attempted murder trial.

Police reports at the time said the shooting happened as a result of a dispute among acquaintances. Pullen contended that he was defending himself and his family.

Pullen’s defense attorney, Christian Baril, said through text message after the verdict that “the trial was long and hard fought.” He also noted that because of a potential violation of the rule on witnesses being in the courtroom, among other issues, he would be filing a motion for a new trial and if that was denied, he would be filing an appeal.

Pullen’s trial, which ran more than a week, hinged on video footage from the scene, primarily from the ABC drive-up window security camera — Pullen and his fiancee, Jaliyah Lemons, were in line to get a cigarillo when the shooting took place. Their son was in the backseat asleep.

Pullen has claimed self defense in the case and this hinged on whether Sutton had drawn a gun as he rounded the back of the Ford Focus. Sutton is seen in the video of the incident at the very top left of the frame and mostly covered by a timestamp.

Baril told the jury more than once that Pullen started shooting after he saw Sutton come around the car with a gun drawn. This happened after Pullen and people traveling with Sutton had exchanged words moments before.

Clark recalled that Pullen first told police he wasn’t there that night at ABC, then he was there, but was acting in self defense. However he couldn’t identify the shooter. Then he could identify the shooter, Traveal Sutton. Then, during trial, he said Sutton didn’t shoot at him so much as came around the back of the Ford Focus with a gun. He told the jury that Pullen’s narrative changed each time the police gave him a snippet of information.

“He was making up a story,” Clark said. “What are we supposed to believe?”

He told the jury Wednesday that Pullen was “trying to outsmart the police” by changing his story to match the information they had.

In previous testimony, Pullen admitted to lying to police — he said he was trying to see what they knew about the case.

“He shot those four people,” Clark said to the jury, pointing to Pullen. He even noted that video entered into evidence appeared to show Pullen shooting at a man cowering behind Tres Hombres for cover, a man who had been shot in the head — though it’s unclear by whom.

Clark also reiterated a line of questioning he made Tuesday — he wanted to know why Pullen, nor his fiancee, called the police for help.

“Innocent people don’t run,” Clark told the jury in closing Wednesday. However, Tuesday, Pullen testified that he didn’t go to police claiming self-defense because he didn’t think they would believe him. Lemons also testified to this Tuesday.

“I knew they wouldn’t look at it that way,” she said.

“Jody Pullen didn’t get to pick the time or the place he had to choose to defend himself,” he began. He said unlike the attorneys and those in the jury, he didn’t get to hit pause, rewind the video, look at all the angles and make a decision.

“The only way was to fight or die,” he said.

Reflecting on the specific language of the law the jury had to weigh, Baril said Pullen had the right to defend himself if the threat of death or great body-harm was imminent.

Baril also called into question the believability of Sutton, who testified for the state. He said Sutton’s gun was found by the police, but not on the scene — it was found under a car a few blocks away. He said he, too, had changed stories. He was a felon seen on camera with a gun and Baril said he had every reason to lie.

Baril said that he was not aware that Sutton had ever been charged for being a felon in possession of a weapon and online court records website Judici did not show a charge filed as of press time.

In some of his final words to the jury, speaking after Baril, Clark’s summation of the case was simple.

“This is Jody Pullen’s fault,” he said.

Avenya Davis, Pullen’s aunt, was emotional after the trial. She said the evidence shown at trial only told part of the story as to why shots were fired that night. She said the video evidence Clark played so many times during trial never showed where the bullets that struck Pullen’s car came from.

Clark addressed this briefly in his closing arguments, saying that it was logical there would be return fire after Pullen started shooting.

Davis also noted that the narrative provided by the state, saying Pullen showed his guilt by not calling the police didn’t address the bigger question.

CARBONDALE — Four people were injured in a Friday night shooting near a popular downtown nightspot, and a suspect remained at large Saturday.

“Nobody black really trusts the police,” she said.

In Pullen’s case, she said family did try to get him to turn himself in to the authorities, but were worried about him doing so without an attorney.

Baril said he stands behind his client’s decision that night.

“Although Jody Pullen stands convicted,” Baril wrote in a text message Wednesday, “he did what he had to do to defend his child and his fiancee´.”

No sentencing date has been set for Pullen but Baril said it likely would be in 60 to 90 days.

Jody Pullen Jr. is taken from the Jackson County Courthouse on Wednesday after being found guilty on all counts in his attempted murder trial.

Avenya Davis waits for her nephew, Jody Pullen Jr., on Wednesday in Murphysboro after he was found guilty of attempted murder and other charges.