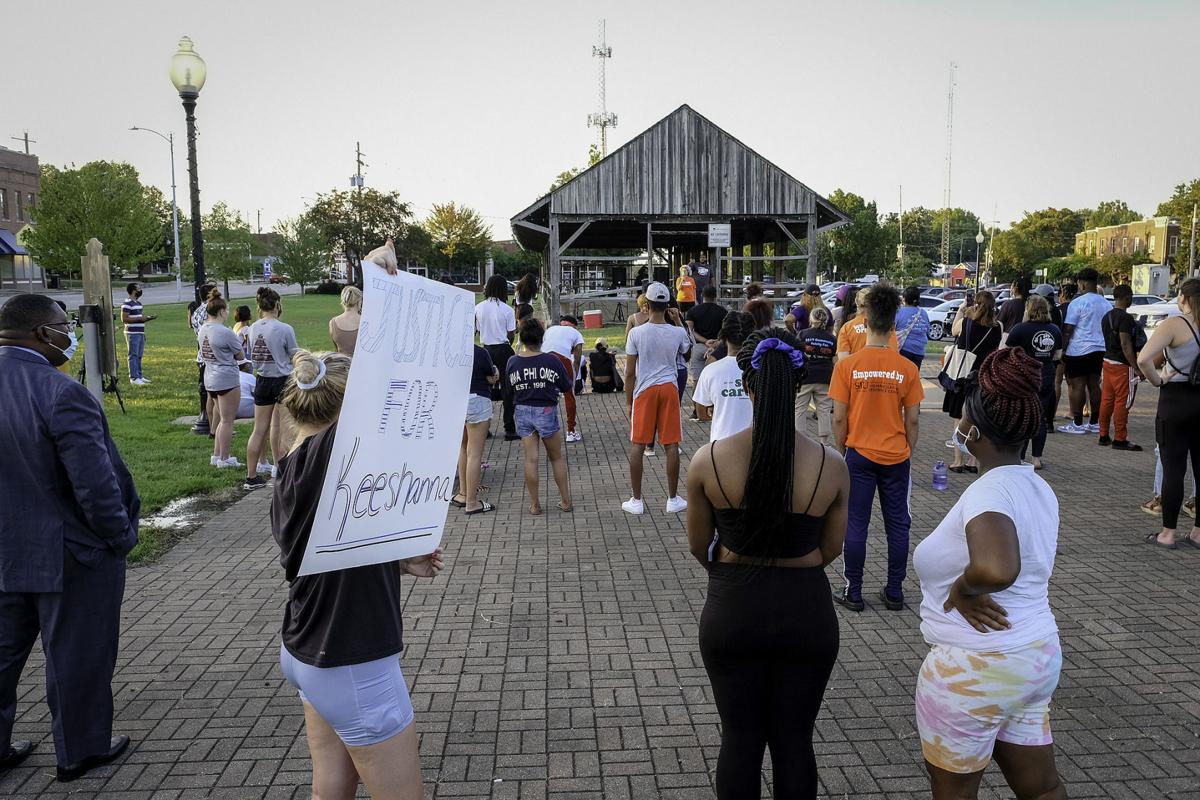 Paige Clore, an SIU senior from Harrisburg, holds a sign during a vigil for Keeshanna Jackson, a freshman who was shot and killed early Sunday, at the Town Square Pavilion on Tuesday evening in Carbondale. The vigil was put on by the Southern Illinois Unity Coalition. 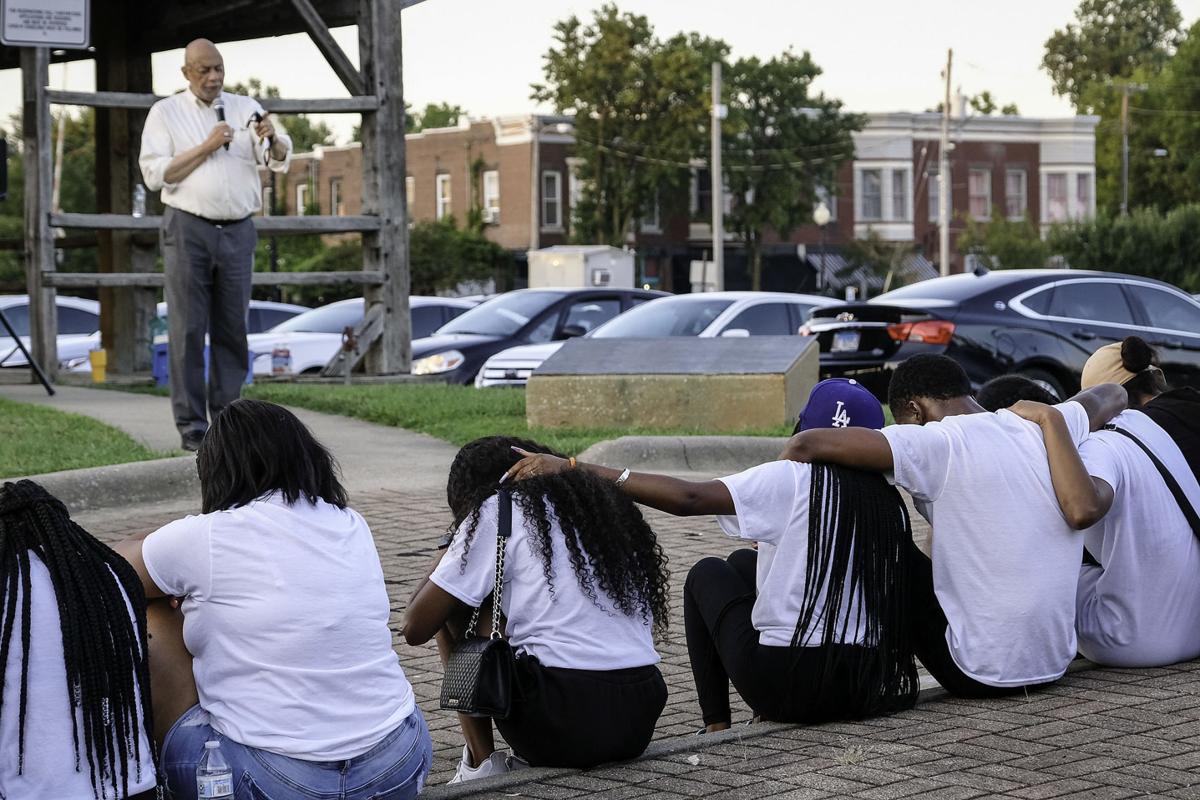 Father Joseph Brown leads a prayer as the family and friends of Keeshanna Jackson, the SIU freshman who was shot and killed early Sunday, comfort each other at the conclusion of a vigil at the Town Square Pavilion on Tuesday evening in Carbondale.

CARBONDALE — Days after the death of Keeshanna Jackson, the community is demanding answers, justice and an end to violence.

The 18-year-old SIU freshman was shot and killed about 3 a.m. Sunday. As of Tuesday evening, police say they were still tirelessly working the case, seeking tips from the public and searching for any information that may lead to an arrest or suspect.

The Southern Illinois Unity Coalition organized an anti-violence rally on Tuesday to honor Jackson’s life and demand an end to gun violence. About 40 people gathered at Carbondale’s Town Pavilion to show their support.

Nancy Maxwell, a member of the coalition, helped organize the event. She said the news of Jackson’s death impacted her as a mother first and an activist second.

“I have a daughter that's 17. She's going to college next year, I would be so upset if I sent her to college, and three days later she was dead,” Maxwell said in an interview. “I would be so upset that it was millions of people at the party and nobody wants to help find who did it.”

Matt Wilson, another organizer with the So-Ill Unity Coalition, said he wants younger generations to have a chance to grow up and feel safe in the community.

“I believe that as a community, and as neighbors, we need to hold each other accountable and set programs where we go out into the community and talk to them to see what is going on in their heads and ask them ‘Why do you feel that you need a gun?’” Wilson said in an interview.

Community members and activists at the event suggested more programs for youth, mentorships, and having designated advocates as possible options to help combat gun violence.

Father Joseph Brown said the first step to ending the violence is saying it has to stop — and to show up and fight it.

“I know ... things are gonna change. Because we cannot continue to have the destruction of a people go unnoticed, unattended and unchallenged and the fact that in four days time, we're (going to) have three rallies about one person's death, that's amazing to me,” Brown said.

Family and friends of Jackson are urging the community to speak up if they have information about the case.

“I shouldn't have had to watch my friend bleed out on the sidewalk in the middle of grass surrounded by people she didn't even know,” Jackson’s friend, Koran Snulligan, a SIU student, said during the rally. “We haven't even been here a week. She didn't even get any grades. Her mama didn't even get to see her before she was dead.”

Maxwell suggested anyone afraid to come forward with information should contact a member of the So-Ill Unity Coalition, use the anonymous Crime Stoppers hotline, or tell a counselor at SIU.

The city's police chief said Tuesday his detectives continue to work tirelessly to solve the case.

The Carbondale Police Department, with the assistance of SIU's Department of Public Safety and other law enforcement partners, continue to actively investigate the shooting incident, Chief Stan Reno said in a news release.

“I plead for anyone with information to come forward and assist with bringing justice to Keeshanna and her family. Furthermore, I call for an end to the violence in the City as we strive to provide a safe environment for all Carbondale citizens and visitors. We will continue to work with our law enforcement partners and the State’s Attorney’s Office to hold offenders accountable," Reno said in a statement.

City Manager Gary Williams said that the city is committed to investigating this incident thoroughly and "we will do everything possible to support the families and loved ones involved."

"We hope to bring accountability and justice to those responsible for this senseless violence. Our thoughts are also with the three victims who sustained non-life-threatening injuries and we wish them speedy recoveries. Carbondale is a great City and we are saddened by the careless acts of few that have impacted so many others," Williams said.

On Monday, police confirmed multiple shooters were involved in Sunday's incident in which Jackson was killed and three others were wounded.

Jackson County State's Attorney Joe Cervantez is urging the public to come forward with any information relating to Sunday’s shooting and the death of freshman Keeshanna Jackson.

He said so far cooperation with law enforcement has been lacking and the public needs to speak up if they know something.

It is time for individuals to be courageous, put their community first and stand up for having safe neighborhoods, Cervantez said.

SIU will be holding a memorial service for Jackson on Wednesday in the Student Center Ballrooms at 6:30 p.m.

Several gathered Sunday night at Davies hall on campus for a candlelight vigil and balloon release in Jackson's honor. For detailed coverage of the vigil, visit www.thesouthern.com.

Kids are heading back to class across the country, learning in person this year. But COVID-19 is forcing some students to quarantine, and othe…

Paige Clore, an SIU senior from Harrisburg, holds a sign during a vigil for Keeshanna Jackson, a freshman who was shot and killed early Sunday, at the Town Square Pavilion on Tuesday evening in Carbondale. The vigil was put on by the Southern Illinois Unity Coalition.

Father Joseph Brown leads a prayer as the family and friends of Keeshanna Jackson, the SIU freshman who was shot and killed early Sunday, comfort each other at the conclusion of a vigil at the Town Square Pavilion on Tuesday evening in Carbondale.