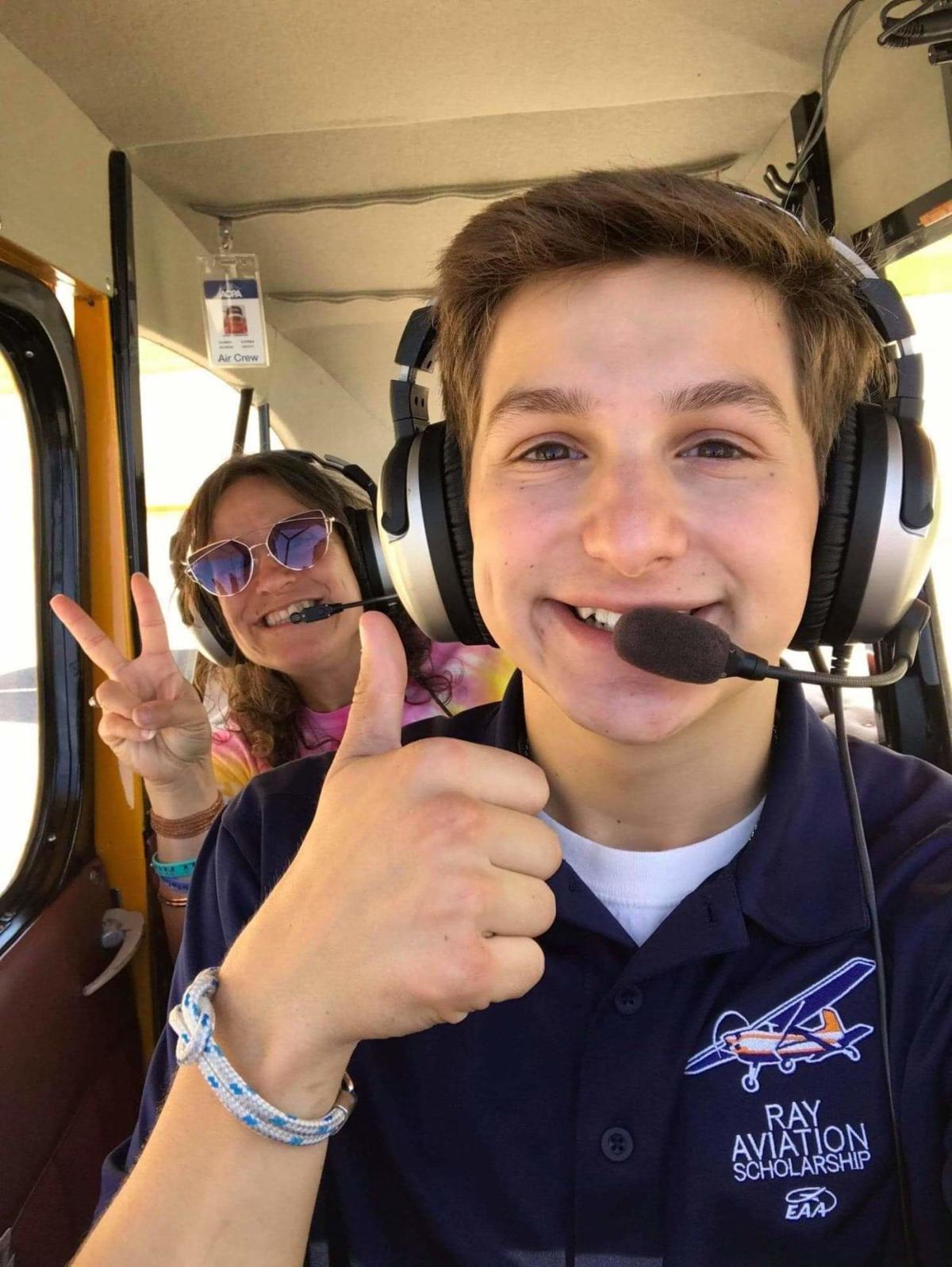 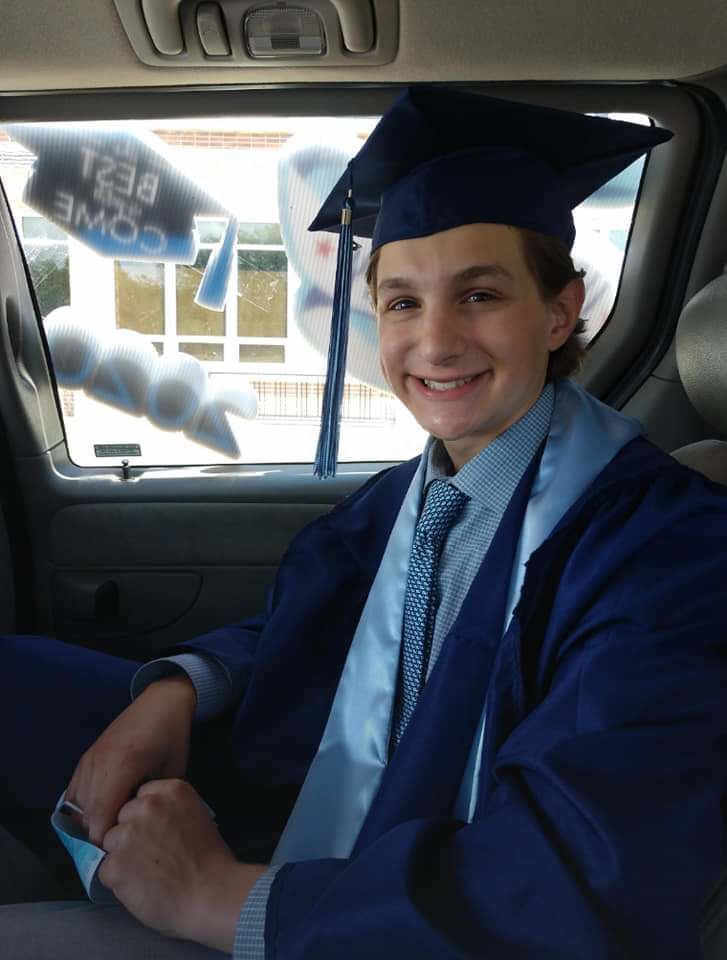 Joseph Ermel poses in his car during his drive-thru high school gradation. 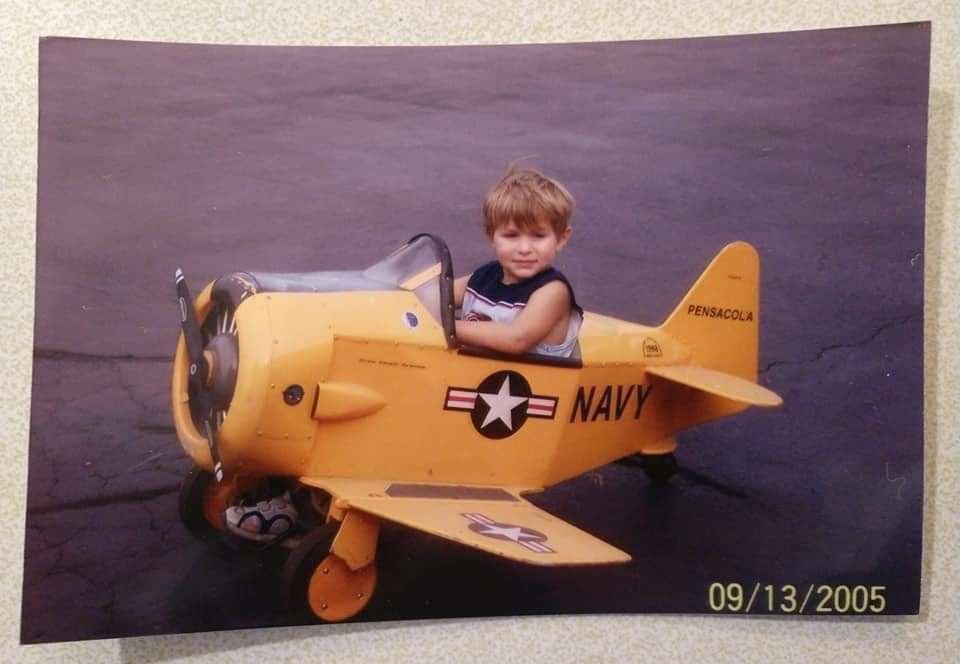 A baby photo of Joseph Ermel in a toy airplane. 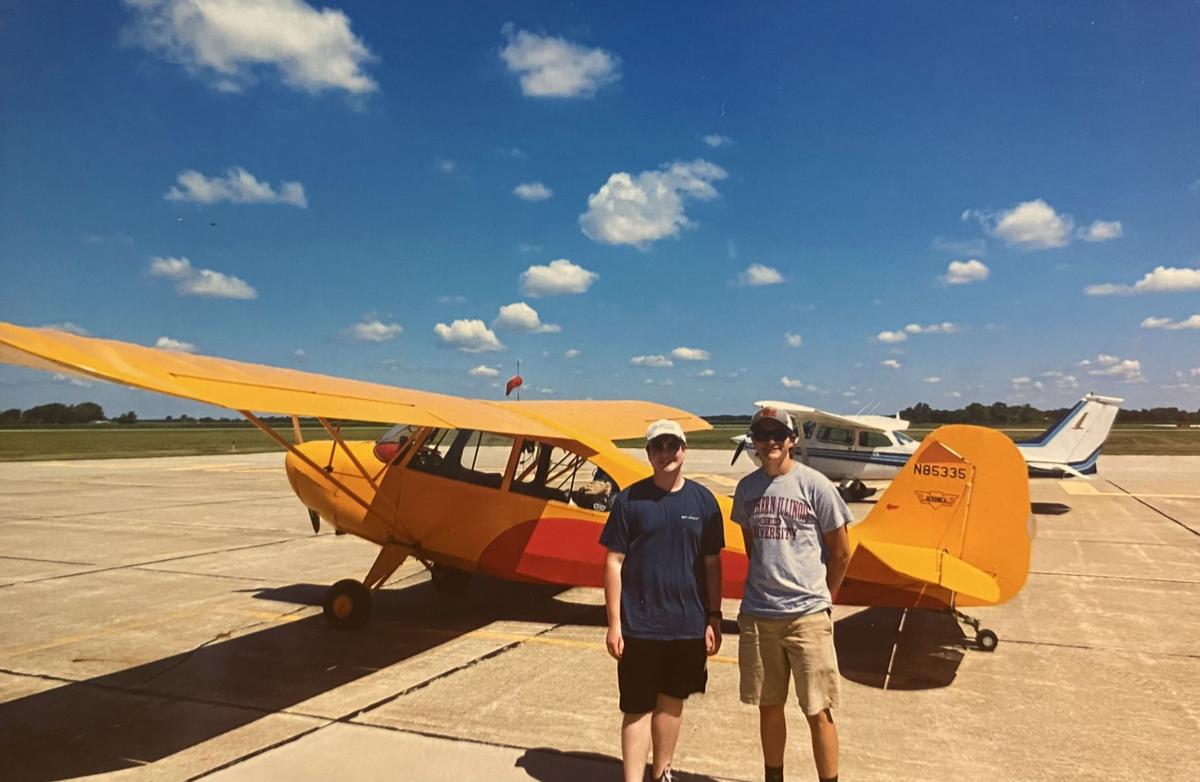 Joseph Ermel and Matthew Shaw posing in from of Ermel's grandfather's airplane. 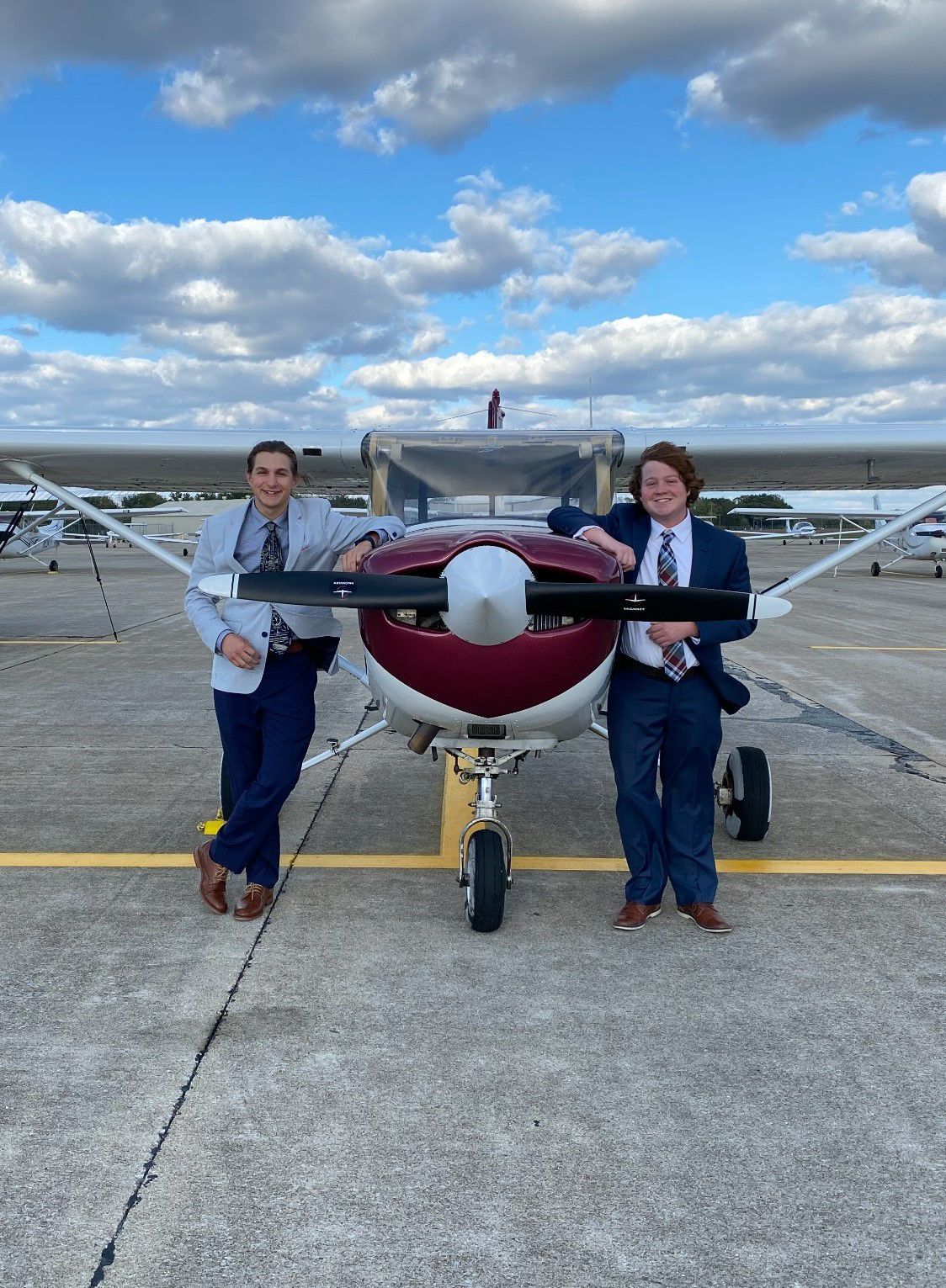 Joseph Ermel and Matthew Shaw at a Flying Salukis competition. 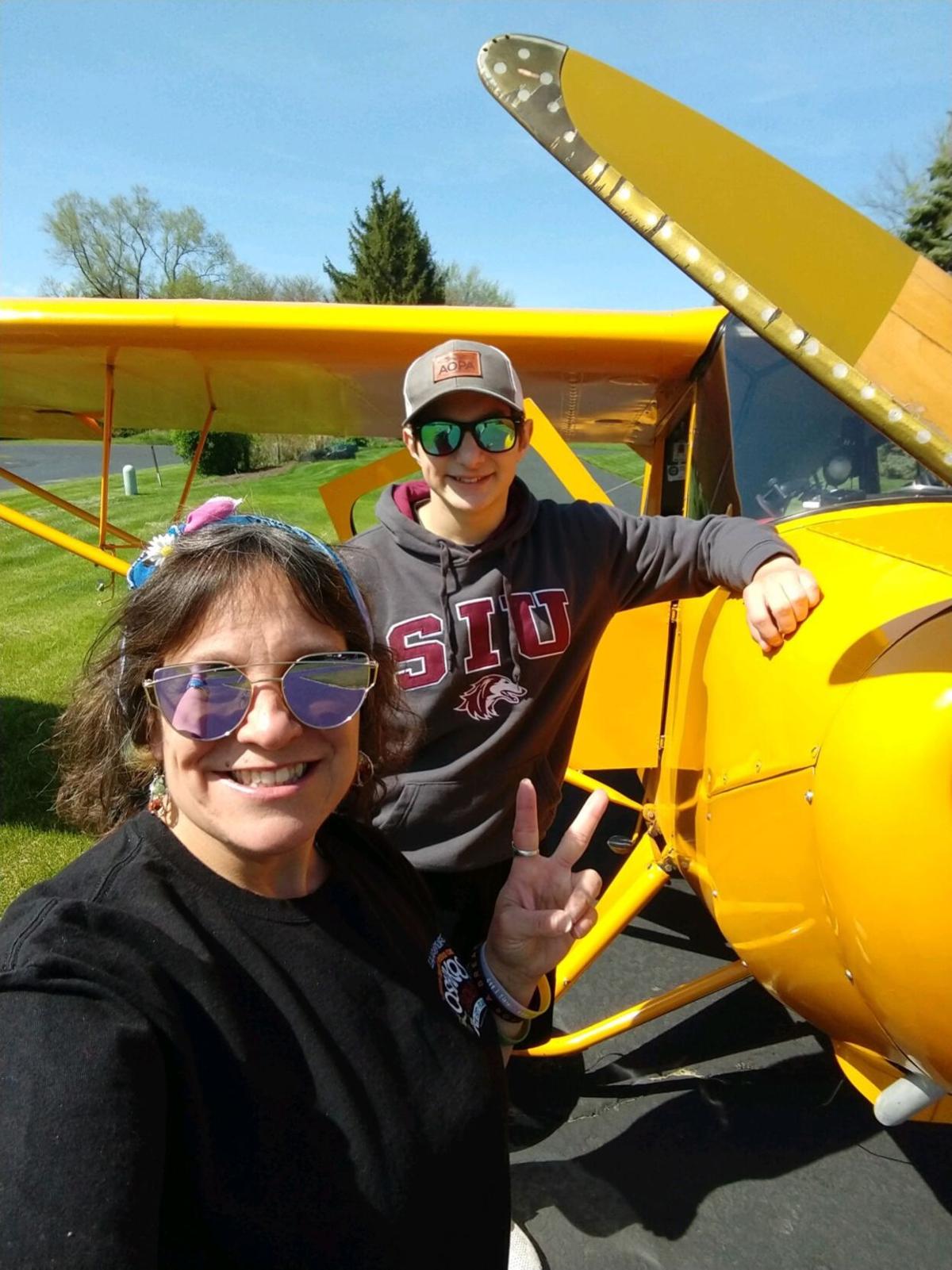 Joseph Ermel and his mother, Ayme Zimmerman, pose with an airplane. 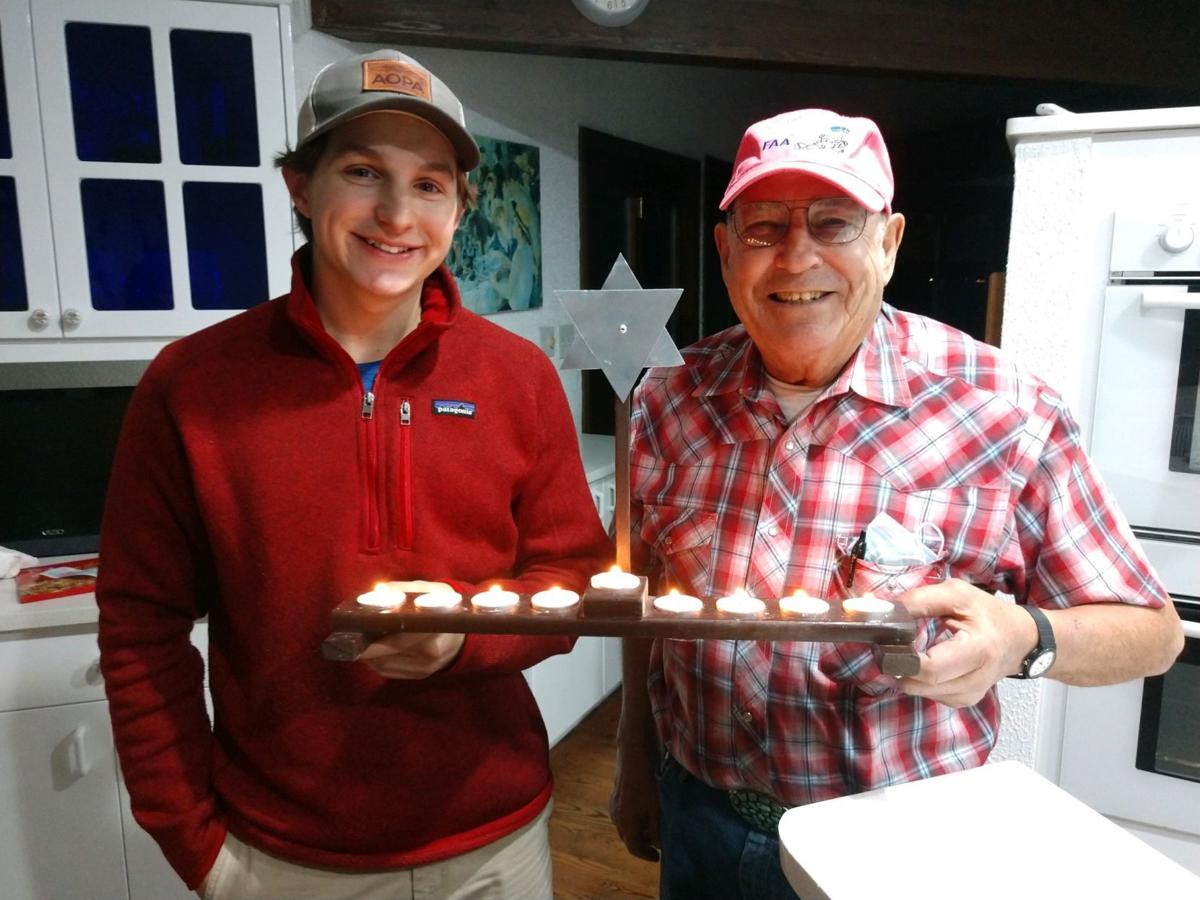 Joseph Ermel and his grandfather, Arnold Zimmerman, pose with a menorah they made together years ago. 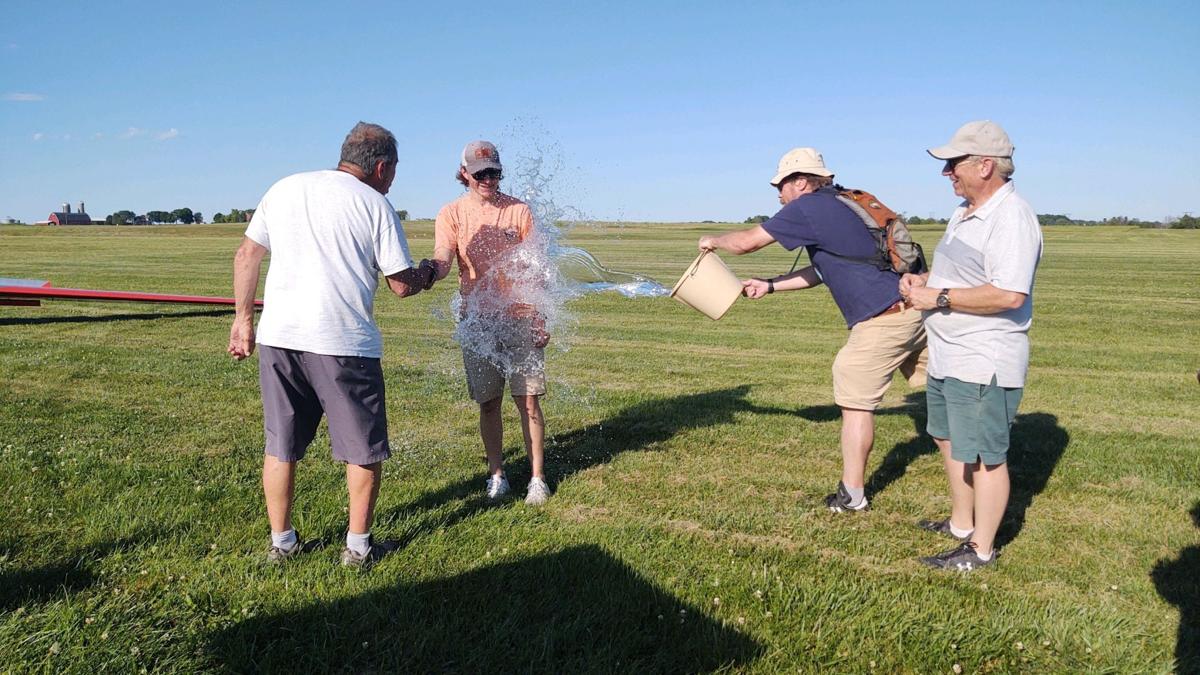 Joseph Ermel gets splashed with water right after he soloed a glider in Hartford, Wisconsin. 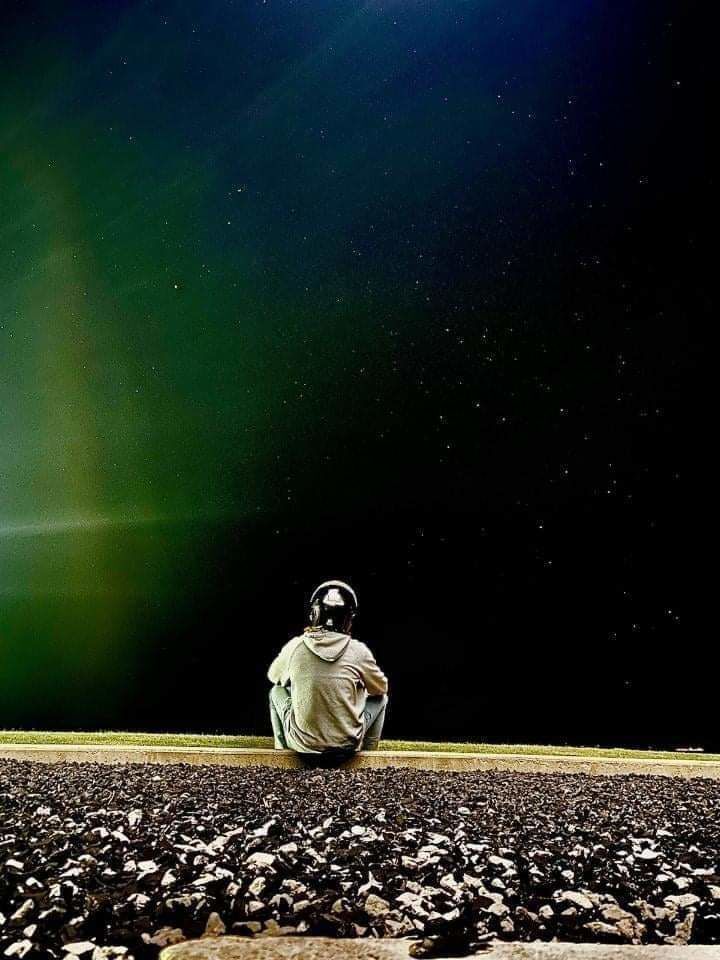 An edited photo of Joseph Ermel that he took for himself in the middle of one of his motorcycle rides. 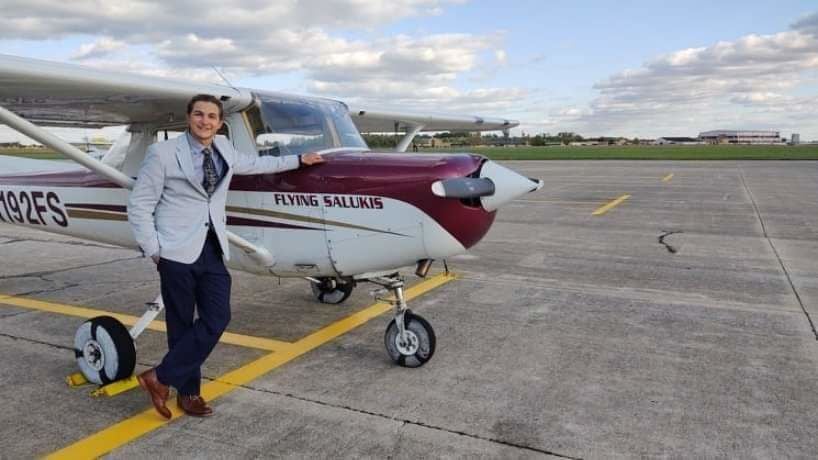 Joseph Ermel was destined for the sky.

At age two, his grandfather Arnold Zimmerman duct taped him and his brother into the seat of his Breezy airplane and took the boys up for Joey's first flight.

When they landed, all he could say was “Papa up, papa fly,” Joseph’s mother, Aymee Zimmerman, said.

From then on, Joseph was eager to follow in his grandfather’s footsteps. He soloed in two different airplanes on his 16th birthday, and received his private pilot’s rating on his 17th birthday.

And, before the ink could dry on his certificate, he was giving rides to kids and introducing them to aviation through EAA's Young Eagles program, Arnold Zimmerman said.

He eventually wound up at Southern Illinois University Carbondale, where he was majoring in aviation flight and technologies.

In a tragic motorcycle crash, the 19-year-old from Downers Grove died Oct. 27 near Alto Pass. He leaves behind countless grieving friends and family.

“He really truly was the lovingest glue I think there could be in our family,” his mother said. “He was a peacemaker and lighthearted little imp. Really, he was a jack of all trades in our family. He was truly a loving guy, always trying to make sure everybody was happy and getting along.”

Chad Carlson, president of the Experimental Aircraft Association 461 chapter, got to watch Joseph grow up — from a youngster receiving Young Eagle rides to an individual giving the rides to youngsters.

Many families credited Joseph with being the reason they kept their kids involved with the chapter, Carlson said.

“They told me ‘we’re here because of what you guys do, but we stayed for Joe,’ Carlson said. “They’d say ‘that kid looks like my kid. If he can do it, so can my kid.’ I think that the inspiration he sowed is going to continue to grow and develop for a long time.”

Carlson intends to keep all Joseph has done alive within the chapter.

“He’s not with us anymore, but spiritually his memory and legacy are with us. We intend to make good on those things and continue to help people find a path into aviation and to get involved in science, technology, engineering and math.”

Joseph was planning to major in aviation flight and aviation technologies. He worked at the SIU hangar in line service and was a proud member of the Flying Salukis aviation team.

His flying buddies became like a second family for Joseph. He was constantly working with them, joking with them and full of love, Matthew Shaw, a fellow Flying Saluki, said.

Both were plane pushers for the team, meaning they would put the planes in position for competition. Joseph, known for his celebrity impressions, could often be seen doing an impression of Borat during competition, Shaw said.

Family and friends of Joseph are trying to focus on his legacy instead of the loss.

“He just wasn’t meant to be here forever. He had a very full life. A pure life,” his mother said. “The only reason I can have this conversation so sanely is because we shared an insane amount of love in our family and he truly was one of my best friends. It makes it so much easier to keep it beautiful.”

Joseph, the youngest of three siblings, was both a straight-laced kid and jokester. He did well in his classes throughout his academic career, and was on the Dean's List and in the Honors Program at SIU. He never drank nor did drugs, Zimmerman said.

Joseph and Joshua Zimmerman enjoyed golfing, hunting and talking about their shoe collections.

Joseph was also a self-taught guitarist, and popular across campus for taking song requests in the dorm elevators, Shaw said.

He even had a TikTok where he would take virtual music requests throughout the pandemic.

His interest in music started young when the family would play the Beatles RockBand and Guitar Hero. Joseph and his dad, Andrew Ermel, and step dad, George Dellutri loved to play music together and browse the music stores, Aymee Zimmerman said.

His stepdad bought Joseph the Taylor guitar that Joseph played in his TikTok videos.

Joseph found another interest in his time at SIU — motorcycles. It became one of his favorite calming past times, Aymee Zimmerman said.

He invested in a helmet, passed his motorcycle safety class with flying colors, and rode with friends who were invested in safety. However, that didn’t prevent the tragedy of his death.

Joseph died in a motorcycle crash that occurred the evening of Oct. 27 near Alto Pass in Union County, according to the Illinois State Police.

Joseph and some of his friends were going for a ride along a new route that took them through the area that’s known for rather sharp curves, according to Aymee Zimmerman.

As Joseph approached one of the curves, he lost control of his bike, according to Zimmerman. He was then ejected and slid into a guardrail, according to police.

He was transported to Union County Hospital where he later died from his injuries.

Joseph died on his brother’s birthday — which, in retrospect, was a blessing in disguise, Joshua Zimmerman said.

“The reason I say it is kind of a blessing is because he did call me for my birthday. Him and I were able to speak and share some current updates on our lives. We ended the conversation with ‘I love you,’ and I’m really thankful that it occurred," he said.

Joseph’s body wasn’t able to make the final journey home for a few days, but when the trip was made, it was made in style.

The family was able to fly his body back to Downers Grove for the funeral, where more than 400 people showed up to honor his life and legacy, Aymee Zimmerman said.

Several people performed a fly-over memorial for him where they “waved their wings” for Joseph, Carlson said.

Even in death “he still brought people together,” said Shaw.

Joseph’s mother encouraged all to live as he did.

“Something so tragic can still bring beauty. A life can have an impact. Sometimes when a death occurs the impact becomes even greater,” said Aymee Zimmerman. “The best way you can honor your friend is to do your best. Make good choices. Live your impeccable best and love. If those things can happen as a result of this boy having to leave this Earth then imagine the next generation ..."

“I’m going to get a tattoo of a halo behind my ear on my right side, which is where most of my stitches are, once I’m fully healed, to symboli…

Marion police is set to receive their first therapy dog in January. The idea was sparked by a crisis intervention conference that reminded one officer of his own struggle with mental health on the job.

'Thankful' to be alive, SIU student Michelle Dietzel is recovering after shooting

The day ended for Michelle Dietzel, a SIU student from New Athens, with a bullet to the head and a trip to the hospital in an ambulance. The 19-year-old was one of two victims shot at a Halloween frat party shooting off-campus that night.

A Christopher man was killed in a crash Wednesday in Franklin County.

Which of Southern Illinois’ pink cookies tastes best is a matter of personal preference, and there's uncertainty as to which area bakery was t…

The building, 131 S. Division St., will include a roastery, full taproom and event center with outdoor seating.

Shots fired at group of people in Carbondale, police say

Police responded at 12:05 a.m. Tuesday, Nov. 16, to the area of the 400 block of Chestnut Street in reference to a report of shots fired, according to the Carbondale Police Department.

Southern Illinois University Carbondale will hold a recognition ceremony for 124 retired employees for their service to the university on Tuesday, Nov. 30 in the Student Center Ballrooms.

Joseph Ermel poses in his car during his drive-thru high school gradation.

A baby photo of Joseph Ermel in a toy airplane.

Joseph Ermel and Matthew Shaw posing in from of Ermel's grandfather's airplane.

Joseph Ermel and Matthew Shaw at a Flying Salukis competition.

Joseph Ermel and his mother, Ayme Zimmerman, pose with an airplane.

Joseph Ermel and his grandfather, Arnold Zimmerman, pose with a menorah they made together years ago.

Joseph Ermel gets splashed with water right after he soloed a glider in Hartford, Wisconsin.

An edited photo of Joseph Ermel that he took for himself in the middle of one of his motorcycle rides.