Become a Member
Read Today's E-edition
Share This
'Thankful' to be alive, SIU student Michelle Dietzel is recovering after shooting
0 comments
Share this 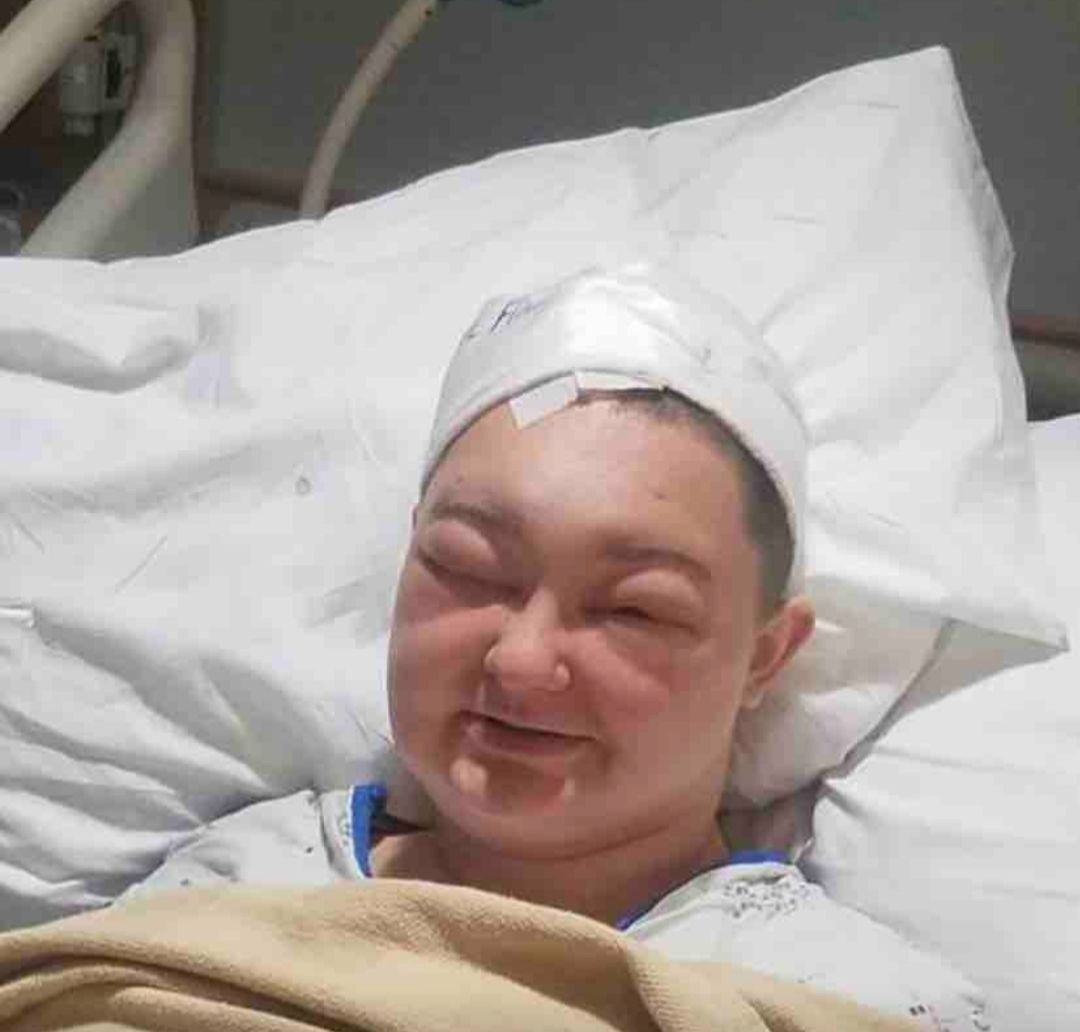 A photo of Michelle Dietzel in the hospital after brain surgery. 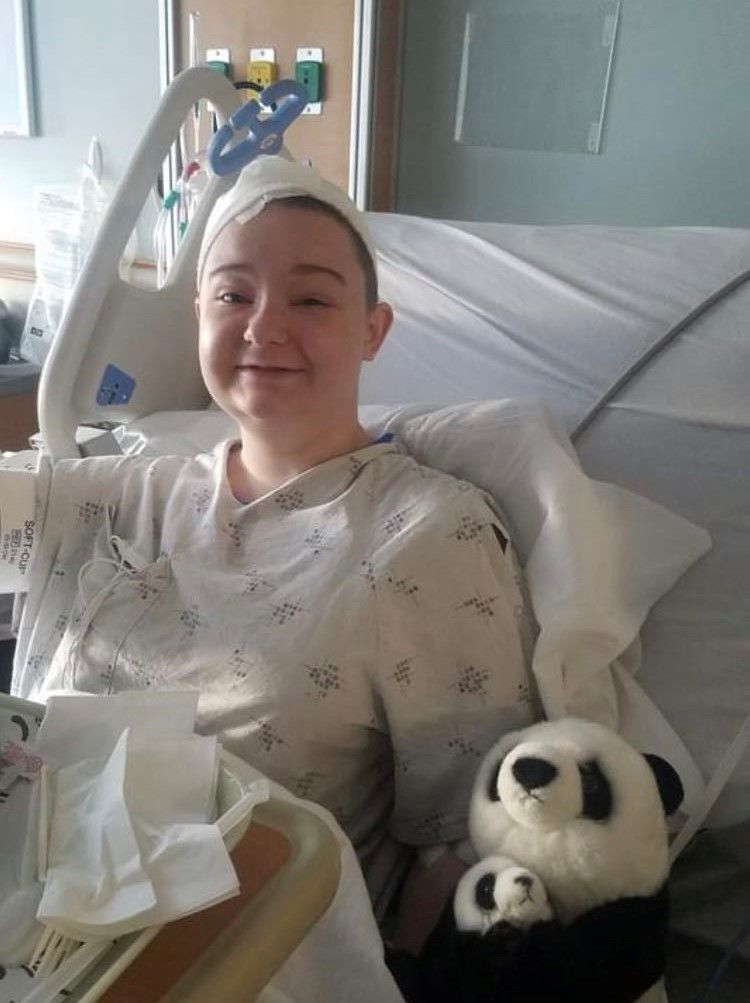 A photo of Michelle Dietzel in the hospital following the Halloween party shooting. 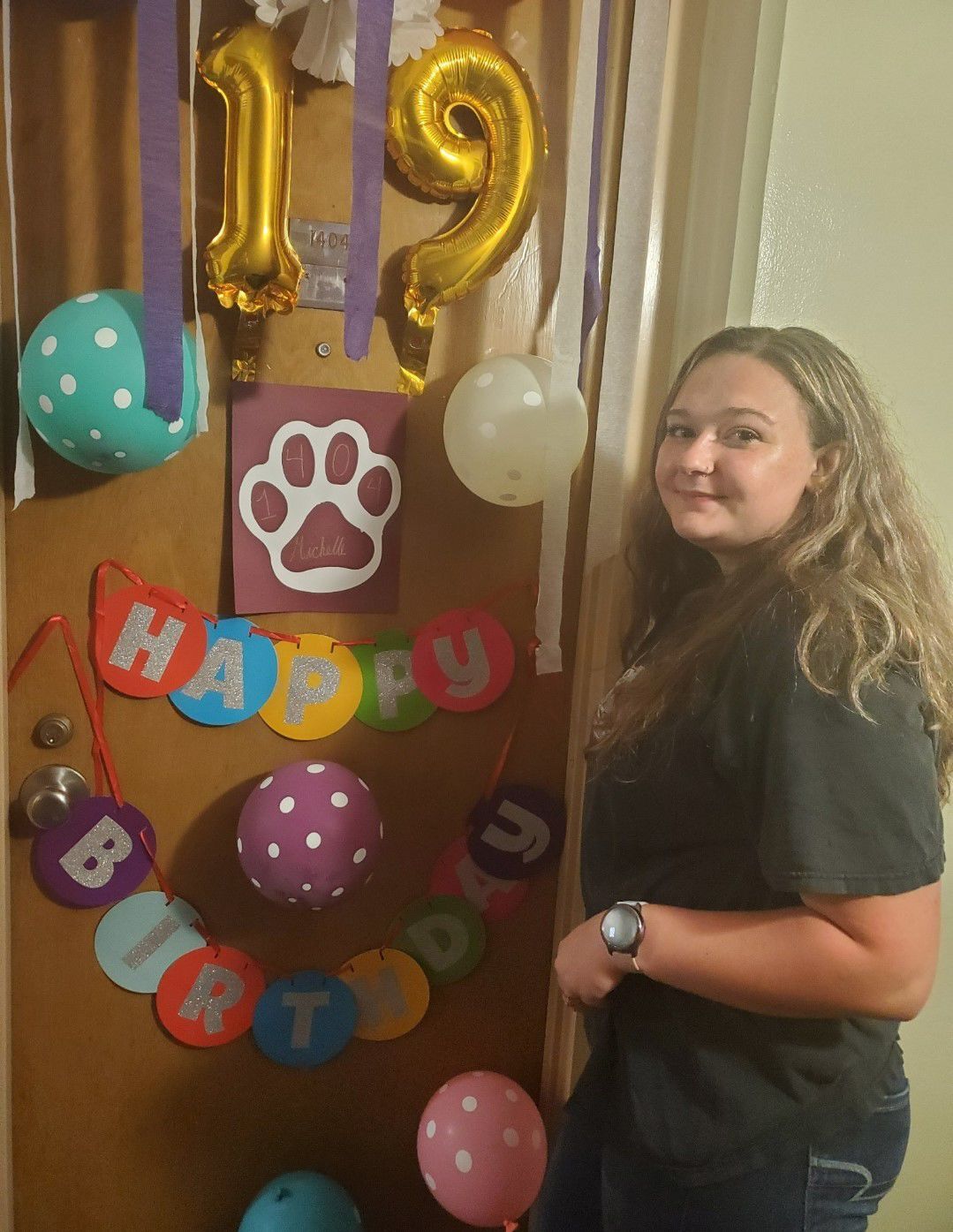 A photo of Michelle Dietzel. 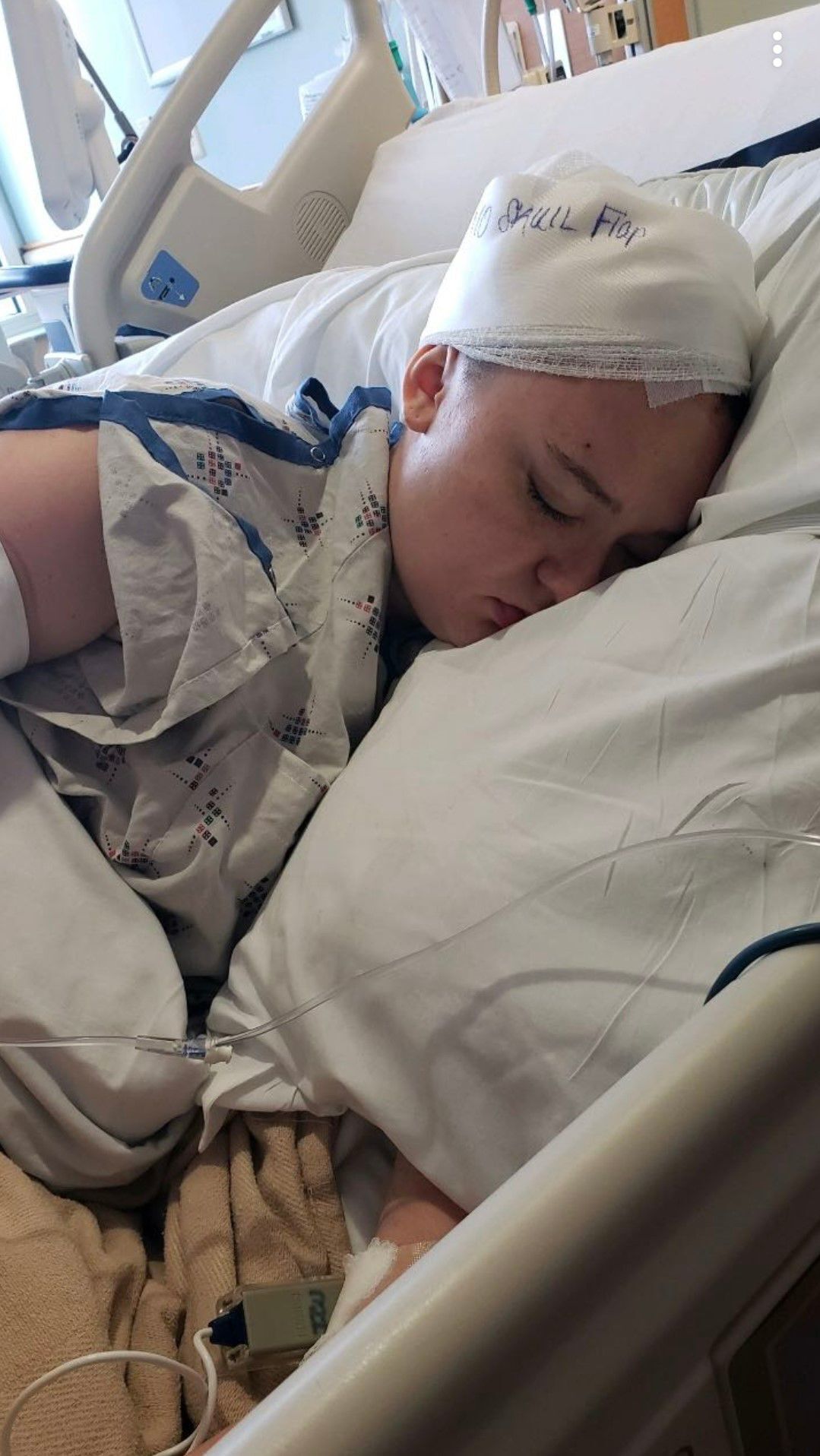 A photo of Michelle Dietzel in the hospital after the shooting. 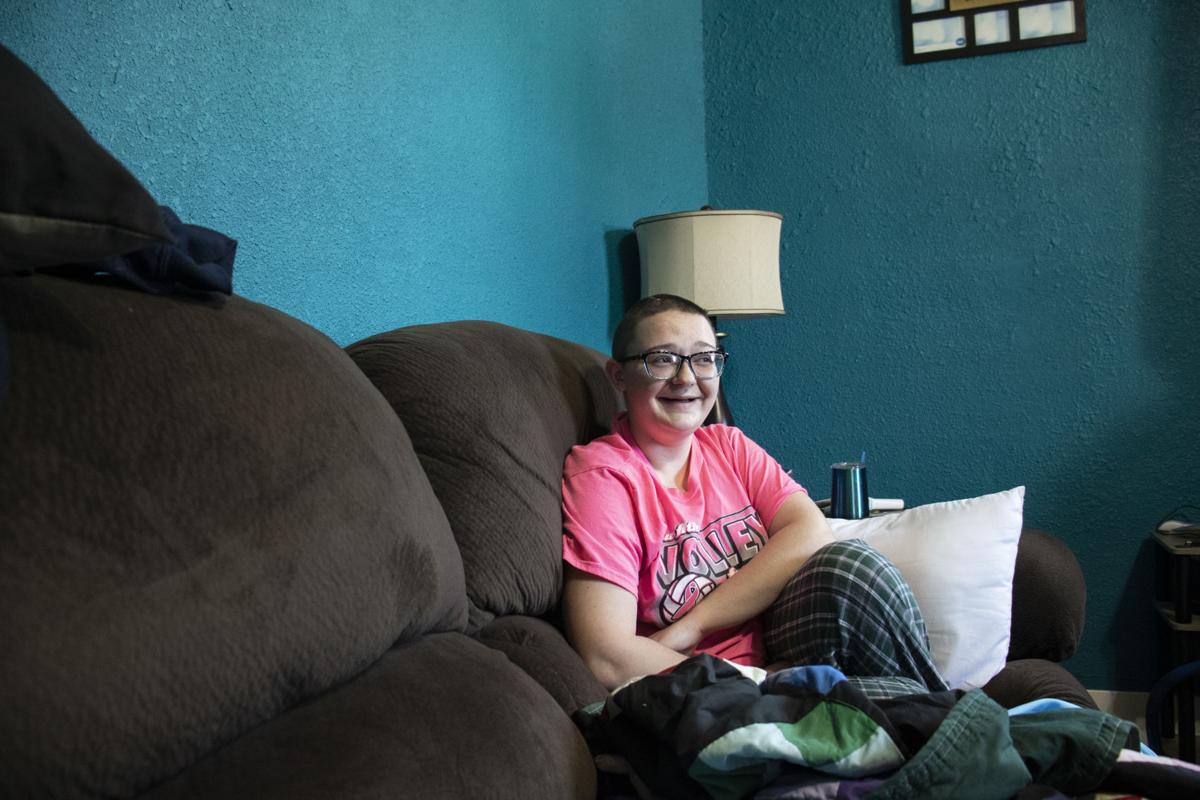 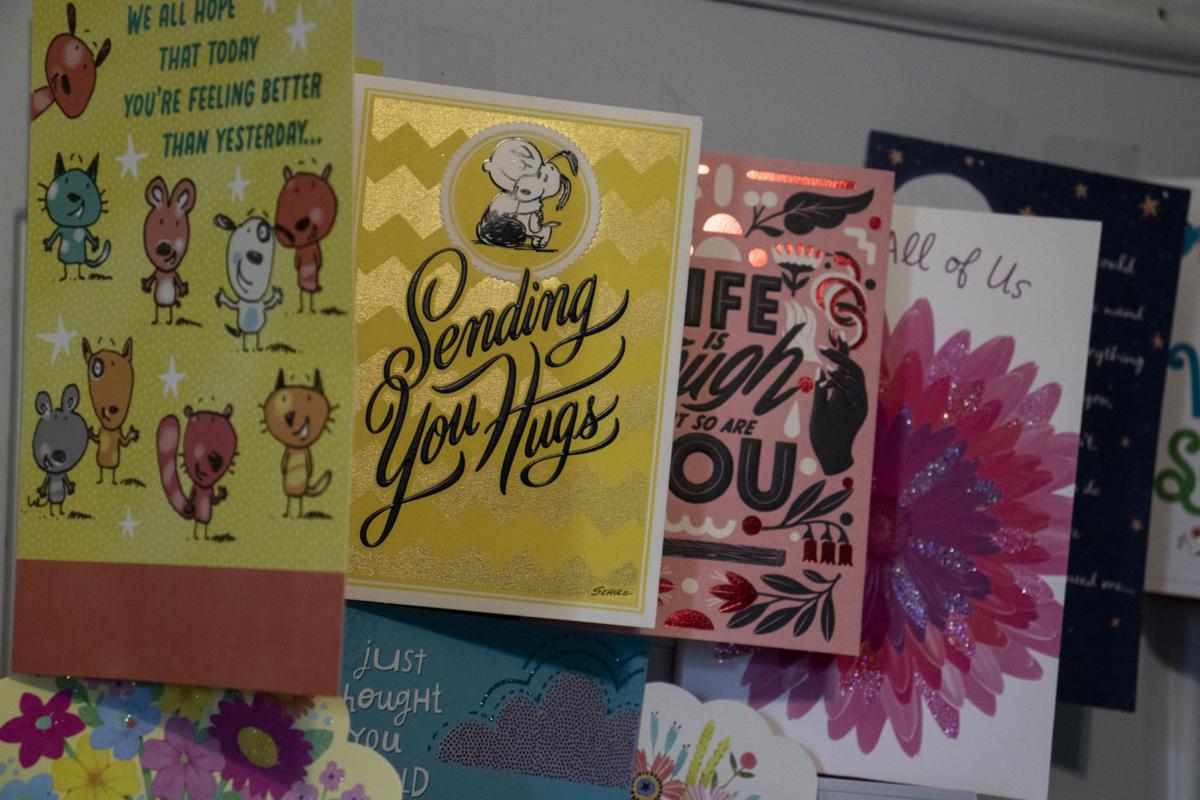 All of the get well cards Michelle as received hang on the inside of the front door Friday November 5, 2021 in New Athens, IL. 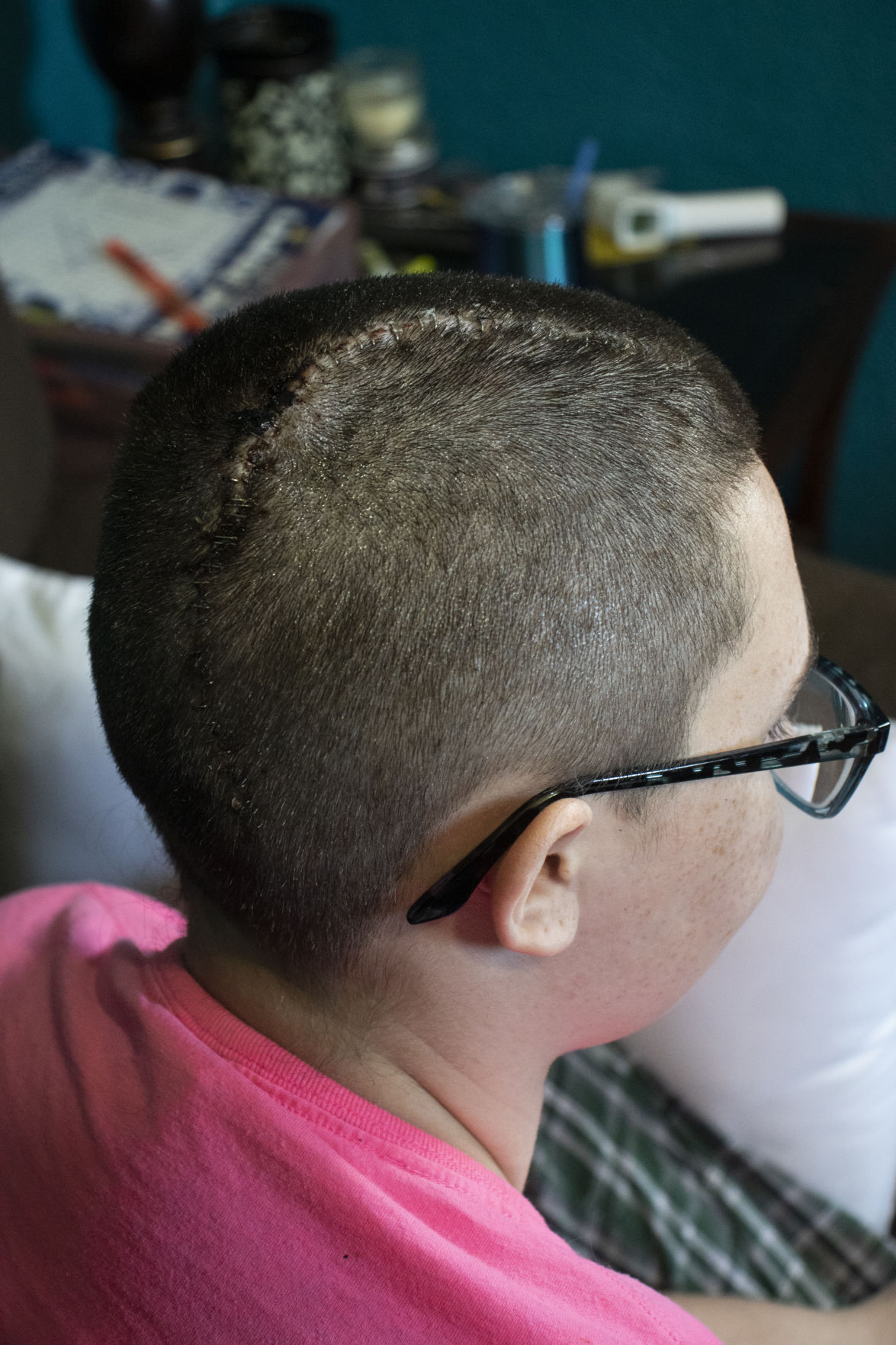 Michelle Dietzel poses for a photo of the stitchs from her brain surgery Friday November 5, 2021 in New Athens, IL. 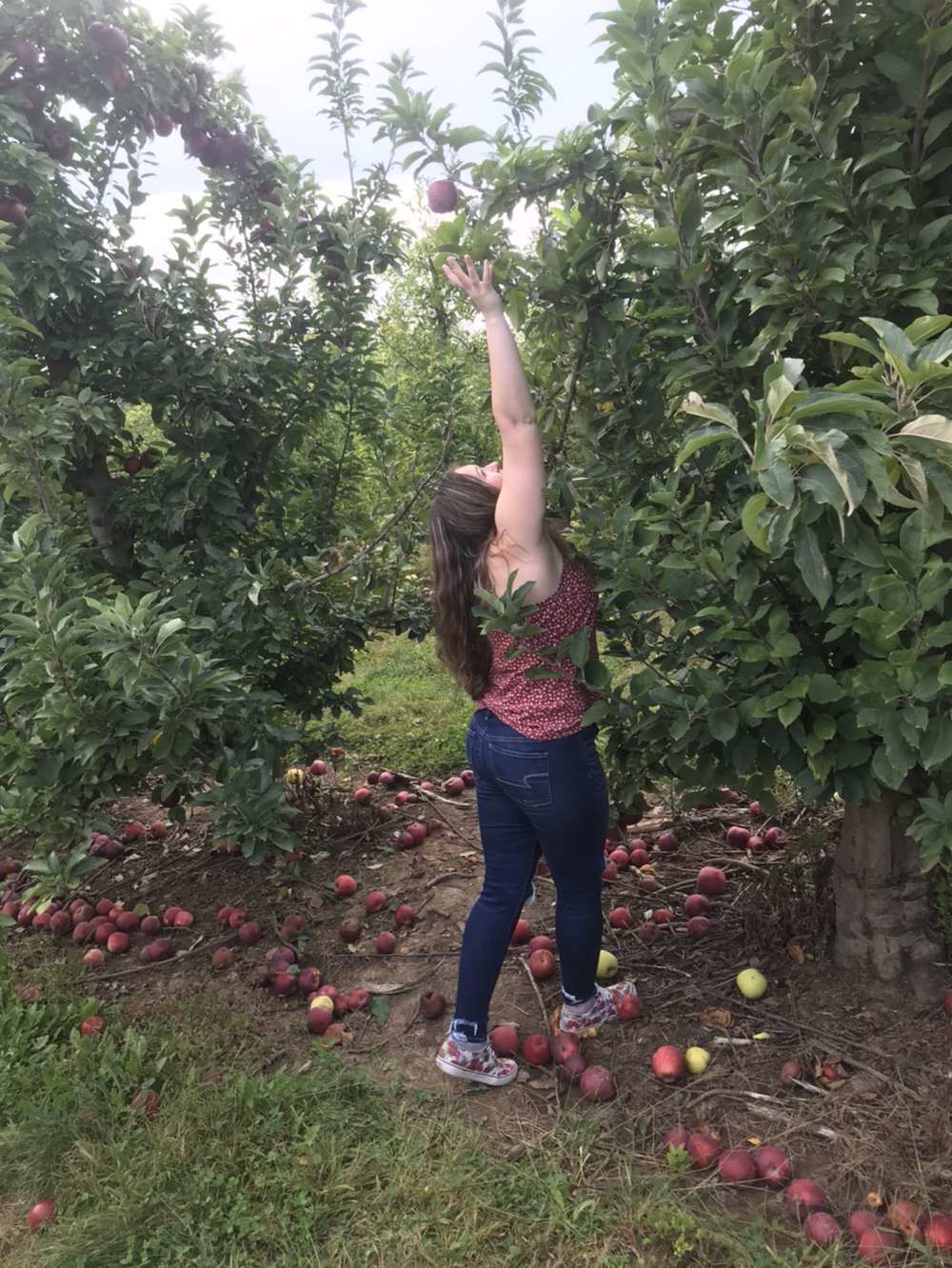 Michelle Dietzel reaches for an apple. 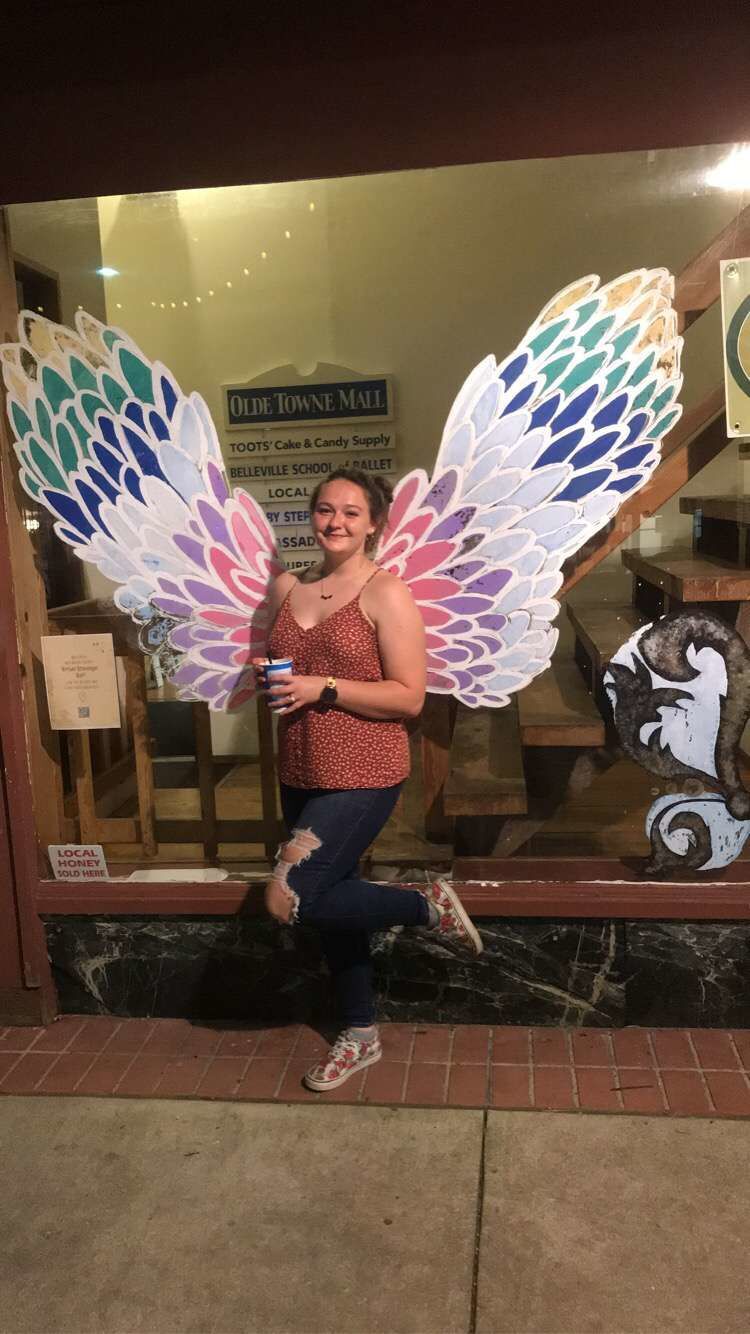 Michelle Dietzel poses in front of a wings mural. 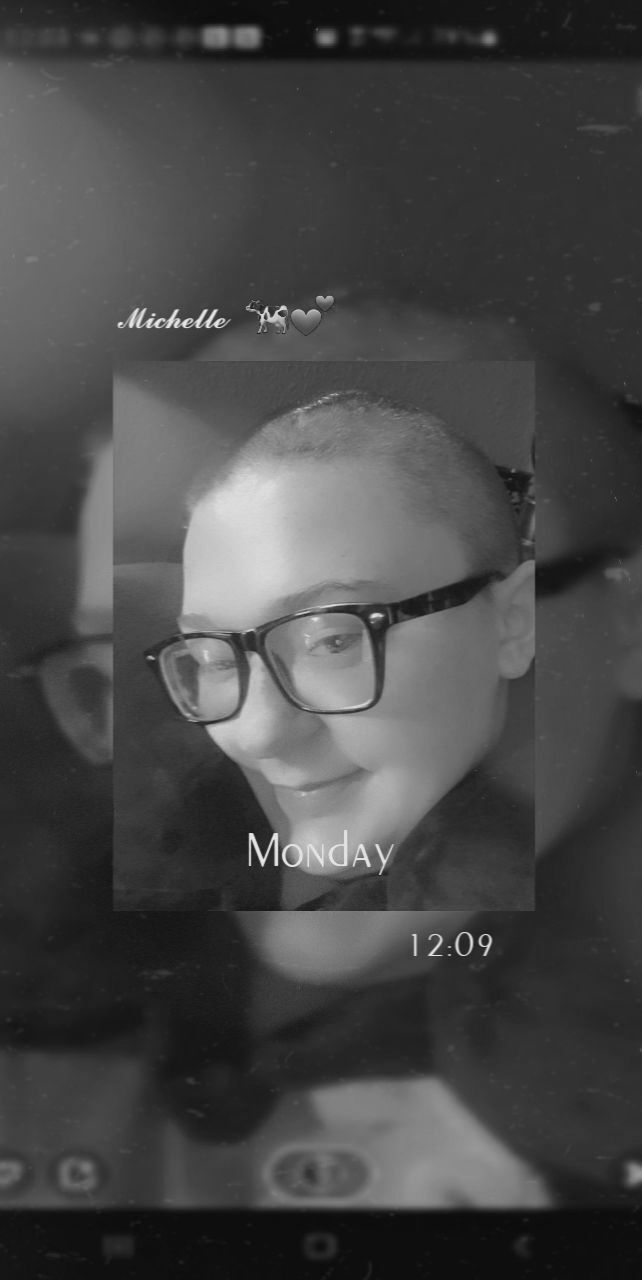 A snapchat photo of Michelle Dietzel. 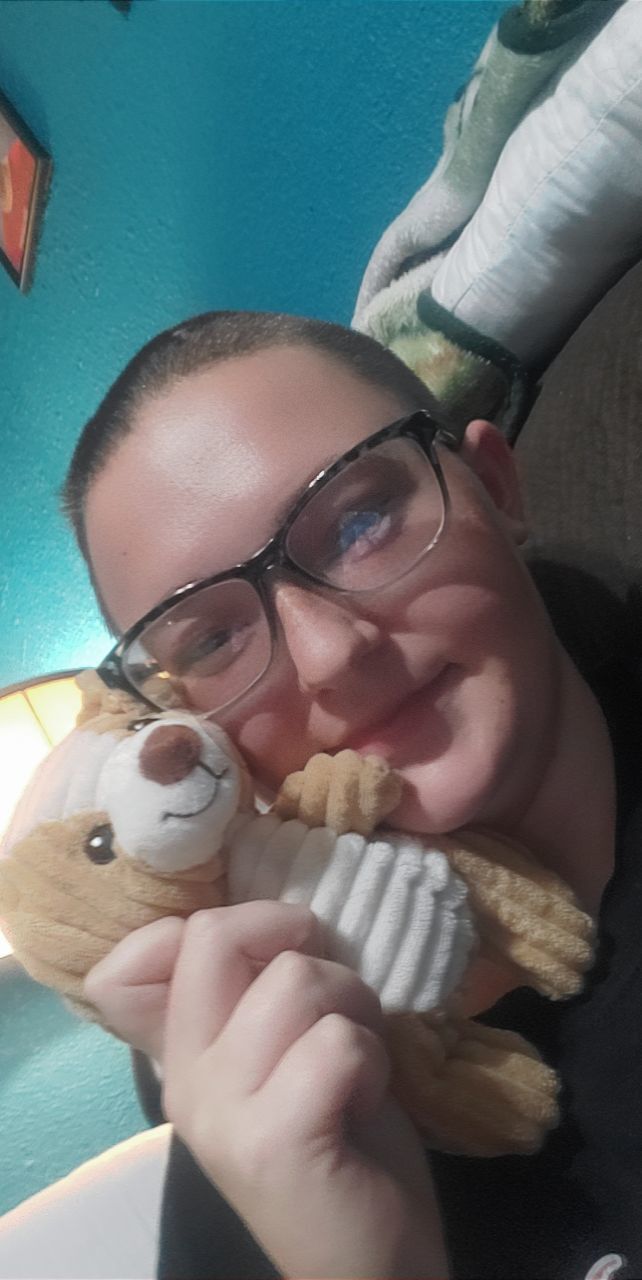 A photo of Michelle Dietzel with a stuffed animal. 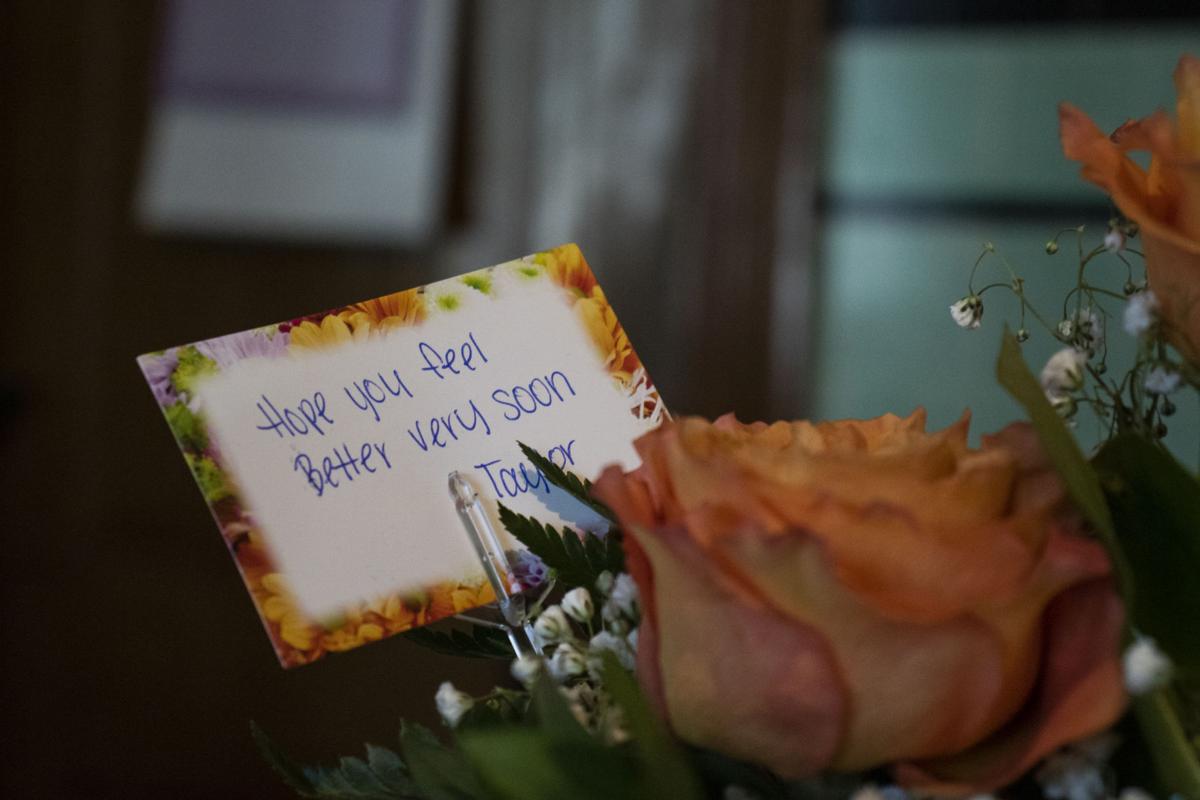 Michelle Dietzel has received so many get well flowers that she has started running out of vases to put them in Friday November 5, 2021 in New Athens, IL. 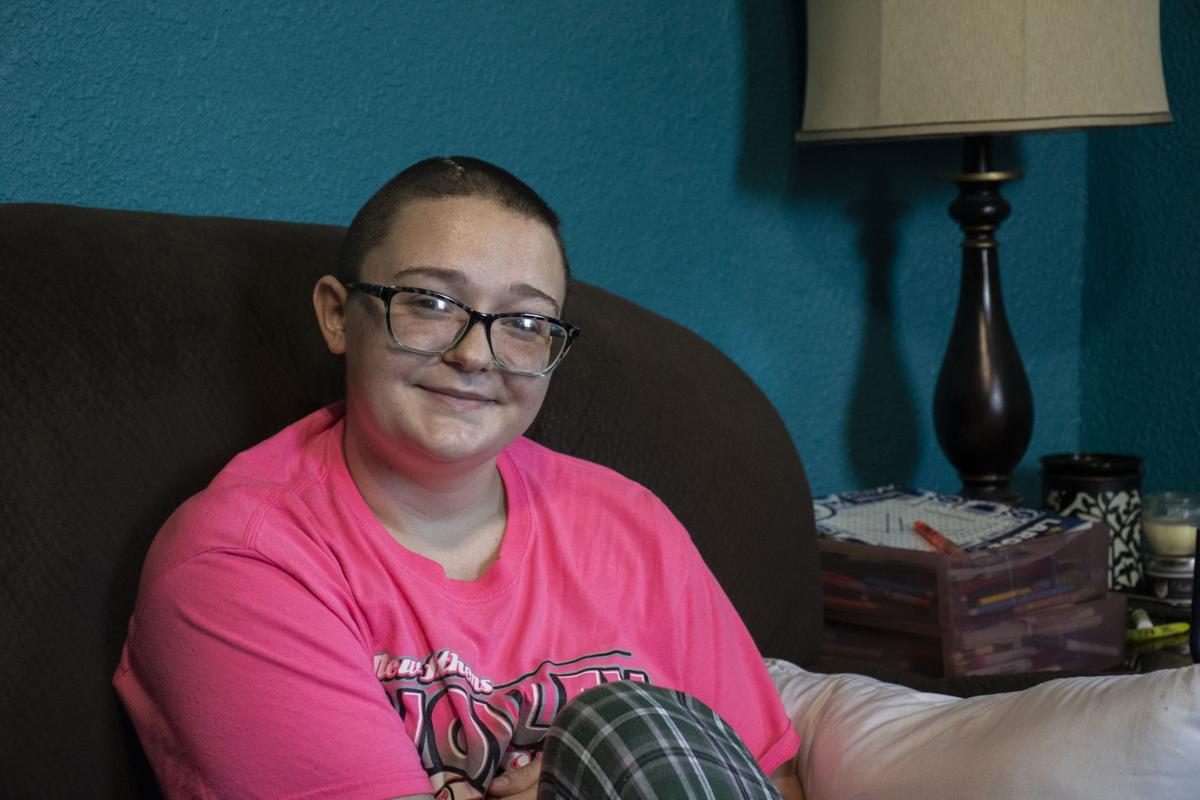 For Michelle Dietzel and her friends, Oct. 23 started out normal — with some last-minute Halloween costume shopping and grabbing a bite to eat ahead of a big party that night.

The day ended for Dietzel, a SIU student from New Athens, with a bullet to the head and a trip to the hospital in an ambulance. The 19-year-old was one of two victims shot during a Halloween frat party shooting off-campus that night.

However, hope has not waivered for Dietzel.

Dietzel was struck in the back of the head by a bullet that shattered her skull and nicked her brain.

“I didn’t really feel myself get shot. I just heard a ringing in my ear like the sound of a gun going off,” said Dietzel. “My vision blacked out so I didn’t really know what was happening. I felt something dripping down my back, and I thought it was sweat so I reached back and I felt this shard. I felt something really hot and cold at the same time. I kind of just put two and two together.”

She said a fight had broken out on the front porch of the frat house as Dietzel and her friends danced away to Latin music. Minutes later, students burst through the door yelling for others to get out of the way as shots were fired, she said.

Anna Schmersahl, Dietzel’s best friend, said she heard the shots, grabbed Michelle, threw her to the ground, along with another friend, and laid on top of them.

“My first thought was Michelle (and our friend) because I don’t know what I would’ve done if I lost them. It’s like flight or fight. I was definitely fighting for not just my life but their lives,” she said.

Once police arrived on scene, Dietzel was taken to SIH Memorial Hospital of Carbondale.

It was from here that her mom, Jennifer Dietzel, received the phone call every parent dreads getting.

“It doesn’t register,” said Jennifer Dietzel. “You feel it, but you don’t. It’s so hard to explain. It’s the weirdest feeling. All I could think about was my daughter. You hear your daughter has been shot in the back of the head and you don’t think she’s going to survive.”

She was taken in for emergency surgery, where they cut open her skull and removed the bullet, glass shards and part of the front of her skull.

According to Dietzel, doctors said had she not turned when she did, the bullet would have likely gone all the way through her brain.

It wasn’t until the next day that things really started looking up for Dietzel.

“After seeing her when she got the tube out and hearing her talk and ready to heal, I thought she was going to pull through,” said Jennifer Dietzel. “I was just more worried about what the aftermath was gonna be and how well she was going to heal.”

Her recovery has been exceptional, according to her family.

While she has regained most of her eyesight, she still lacks peripheral vision. She is expected to remain in occupational therapy for four to five more weeks for her eyesight, left-side weakness and balance.

She will have to have another brain surgery down the line to place a prosthetic in her skull over the soft spot, but her staples were set to come out this past Tuesday, Nov. 9.

Her mental status has recovered less quickly though and still remains a daily struggle for her, she said.

“When I close my eyes it's like I’m at the moment right before it happened,” Dietzel said. “It's loud, but it feels cold. I feel like there’s so much going on and then it gets real quiet and there's these gunshots. I feel myself fall and hit the floor. That’s when I kind of wake up and gasp for air.”

The shooting has awoken new fears in her.

“I don’t like the dark and I don’t like being by myself,” said Dietzel. “I have to know somebody is in the room with me. I can't sleep without knowing the doors are locked and my whole family is here cause I just freak out. It definitely, I feel, will be held over my head for a while.”

Arrest made in late-night stabbing on the Carbondale strip

Dietzel has not been alone in her struggle as her friends, family and the local communities have rallied behind her.

“A lot of people have been saying that I’m an inspiration to them and I’m just trying to get better,” said Dietzel. “I’ve always tried to make a good impact on everybody. To make everybody I know smile. So just that everybody I’ve known has been like ‘You're such an inspiration’ just really makes my heart really happy.”

A total of $5,380 has been raised for the Dietzel family to ease the financial burden caused by medical bills through a GoFundMe started by Jennifer Dietzel’s friend, Wendy Recker.

After Dietzel spent several days mourning the loss of her own hair, her father let her shave his head in support.

“I would never ask somebody to shave their head for me, but like, he just did it,” said Dietzel. “It meant that my dad cares a lot about not just me and how I think of myself. He just wants me to know that I’m not going to go through this by myself.”

She has also received countless gifts and cards. Numerous visitors, including the hosts of the party that night, have stopped by. The hosts bought her a Wonder Woman plush toy, she said.

“Anna basically saved my life,” said Dietzel. “When I got shot, I started to black out and pass out and she was just keeping me calm. Trying to ask me all these weird questions. She (dragged) me across the floor to get me to a safer spot. I’m just so thankful that I was there with those people.”

While Schmersahl is elated by Dietzel’s words, she said she doesn’t see herself as a hero, but rather just another victim.

“I told her mom and her I would do it a hundred times for her or anyone that I love,” said Schmersahl. “I don’t want to be seen as the hero. I want to be seen like I was protecting my friends, and I’m glad that they're alive.”

Jennifer Dietzel mirrors the sentiment that there were more than two victims that night.

To all that are struggling, Dietzel and Schmersahl shared a similar message of taking care of oneself while still living life that is best encapsulated by a common motto of Schmersahl’s mother.

The Carbondale Police Department is still investigating the event, and no new updates are available at this time.

Marion police is set to receive their first therapy dog in January. The idea was sparked by a crisis intervention conference that reminded one officer of his own struggle with mental health on the job.

When they landed, all he could say was “Papa up, papa fly,” Joseph’s mother, Aymee Zimmerman, said.

Chants of “We're not afraid of finals! We’re afraid of guns!” rang out Wednesday on SIU's campus as students gathered outside the Student Center.

A photo of Michelle Dietzel in the hospital after brain surgery.

A photo of Michelle Dietzel in the hospital following the Halloween party shooting.

A photo of Michelle Dietzel.

A photo of Michelle Dietzel in the hospital after the shooting.

All of the get well cards Michelle as received hang on the inside of the front door Friday November 5, 2021 in New Athens, IL.

Michelle Dietzel poses for a photo of the stitchs from her brain surgery Friday November 5, 2021 in New Athens, IL.

Michelle Dietzel reaches for an apple.

Michelle Dietzel poses in front of a wings mural.

A snapchat photo of Michelle Dietzel.

A photo of Michelle Dietzel with a stuffed animal.

Michelle Dietzel has received so many get well flowers that she has started running out of vases to put them in Friday November 5, 2021 in New Athens, IL.