BLOOMINGTON — An estimated 200 people marched through the streets of Bloomington-Normal Friday demanding justice for Jelani Day.

"The Bloomington police should be doing their job. They should be wanting to know what happened to Jelani as well, not because I made all this noise, but because Jelani was important," said Day's mother, Carmen Bolden Day, during the demonstration. "Jelani was somebody. It doesn't matter what color you are, everybody is important and he needed just as much attention looking for him as anybody else."

More than two months into the investigation into Day's mysterious disappearance and death, family members continue pleading desperately for anyone with information to come forward, often saying they have been left with more questions than answers.

The 25-year-old Illinois State University speech pathology graduate student was last seen in Bloomington on Aug. 24. His body was found Sept. 4 in the Illinois River in Peru, but it's unclear how he ended up there.

The LaSalle County coroner last week said the cause of death was drowning, but Day's family and others say he was murdered. They have repeatedly called on the FBI to take over as lead investigators in the case.

Peru Police Chief Robert Pyszka said last week that all files in the case have been given to the FBI. He said the FBI has told investigators that they will assist them, but they will not take over the case.

Bloomington Mayor Mboka Mwilambwe said Friday during the rally that the city's police have "been involved from the beginning (of the investigation) in a very significant way and we will continue to be until we're able to find answers."

A multi-unit task force comprised of the Illinois State Police, the Bloomington and Peru police departments, LaSalle County sheriff's and coroner's offices, and the FBI Behavioral Analysis Unit are conducting the investigation into Day's death.

Anyone with information about the case is asked to contact the LaSalle County Sheriff's Office at 815-433-2161.

On Friday, protesters gathered at the doorstep of the Bloomington Police Department to rally and demand justice for Day. The group, led by the Rev. Jesse Jackson and his organization the Rainbow People United to Serve Humanity (PUSH) Foundation, marched north to the ISU Bone Student Center.

Jackson has said the case looks similar to other racially motivated killings. He also led a march in Peru last month.

"Something is wrong in the city of Bloomington, and we're going to figure it out and we're going to get justice for Jelani," said Jonathan Jackson, a national spokesman for the Rainbow PUSH Foundation. "Please keep this family in your prayers."

Carrying signs that said "Justice for Jelani", the group embarked on a nearly 2.5-mile march. As the the group trekked down Main Street, employees of businesses lined sidewalks. When marchers made their way onto the ISU campus, students cheered from balconies, some joining the march to the Bone Student Center.

On the steps of there, ISU Black Student Union President Heaven Moore said she keeps getting asked why it is important for students to organize and support Day's family.

"I keep saying the importance is that Jelani was a member of our community," Moore said. "It is important that we show up. There is a difference between retweeting and coming out and marching and standing by this family as they continue to demand for justice."

Julie Jones, 54, Donnetta Tetter, 53, and Mary Diane, 59, drove up to Bloomington from Danville to support Day's family and to demand justice. Tetter, a relative of Bolden Day, said, "To be a mother that has lost a child, I don't cry for her, I cry with her. I know that pain. To not know what happened to your son, that is so devastating."

Jones said she joined the march to support Bolden Day, knowing "it could have been my child." She said everybody who turned out for the march wants justice for Day and his family.

Day, Tetter said, was known for his outgoing and loving personality, but most of all, his smile.

"You just couldn't go wrong with Jelani. When you look at the pictures, it's his smile; it's a smile that you just can't resist," said Tetter. She added, "We just want to see the mother get peace and to get answers to what happened to Jelani. We know that Jelani did not commit suicide."

Marchers move through Bloomington calling for an investigation into the death of Jelani Day. READ MORE HERE. 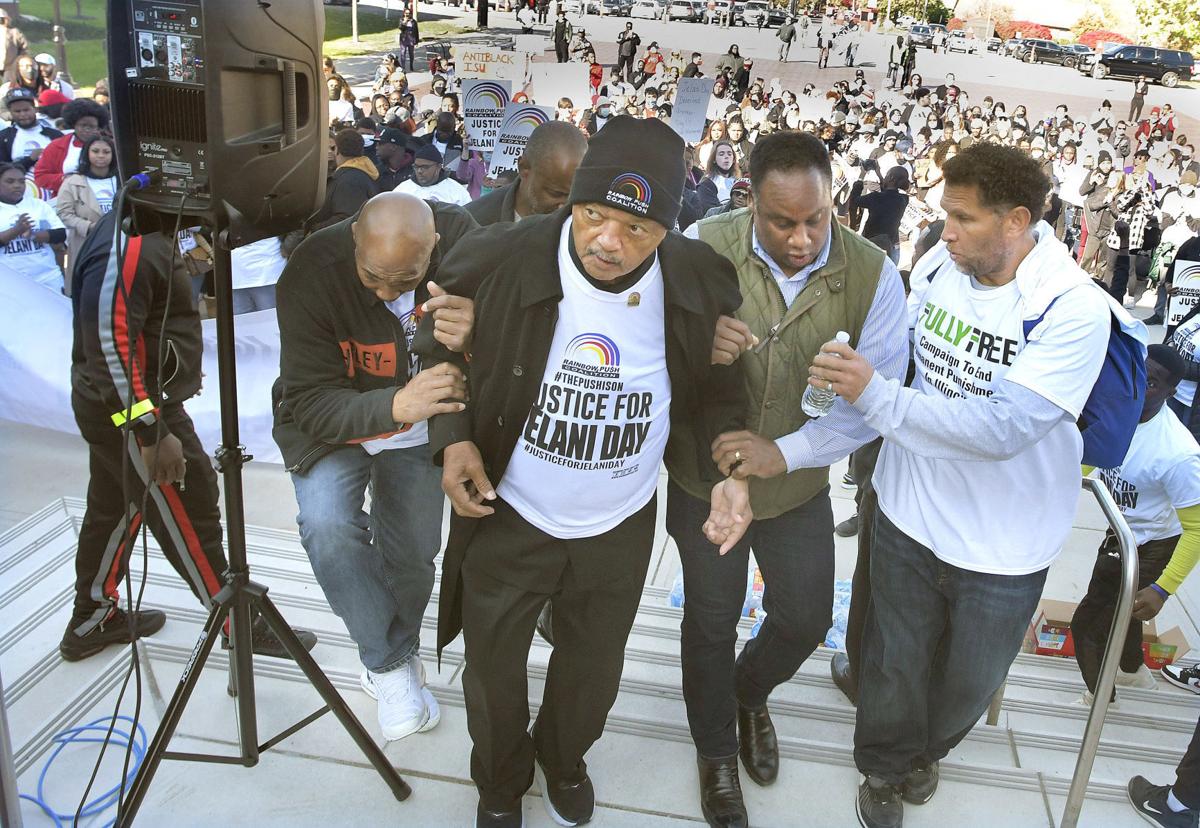 The Rev. Jesse Jackson climbs the steps at the Illinois State University Welcome Center Friday following a march for Jelani Day from Bloomington. Day, whose remains were found in the Illinois River, was studying at ISU. 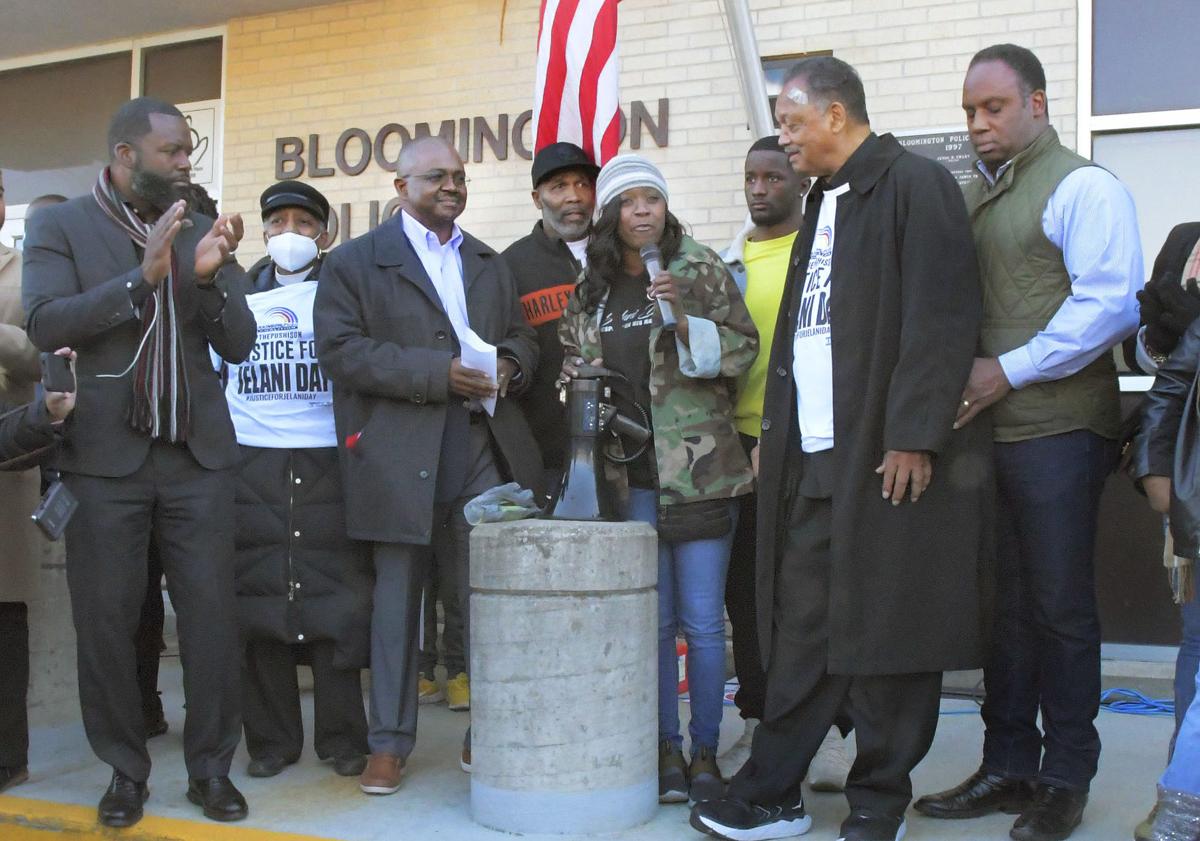 Mayor Mboka Mwilambwe, third from left, stands with Carmen Bolden Day and the Rev. Jesse Jackson at the Bloomington Police Department on Friday, where they urged those with information about the death of Jelani Day to come forward. The group marched from the police station to Normal. 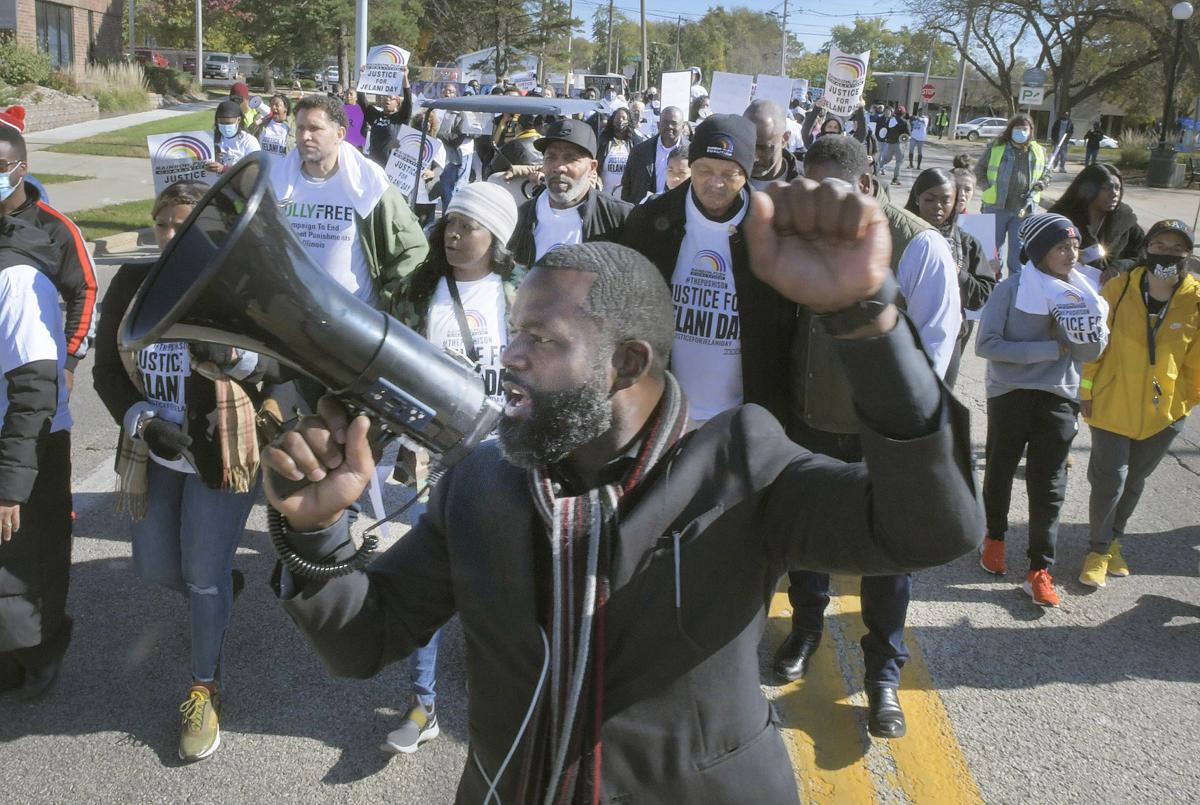 Carmen Bolden Day and the Rev. Jesse Jackson walk down Olive Street as they march to the Illinois State University Bone Student Center on Nov. 5.

Marchers move from Bloomington to Normal on Friday. They marched for Jelani Day, the Illinois State University student whose remains were found in the Illinois River. 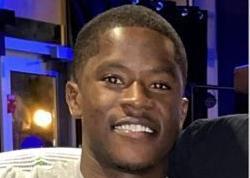