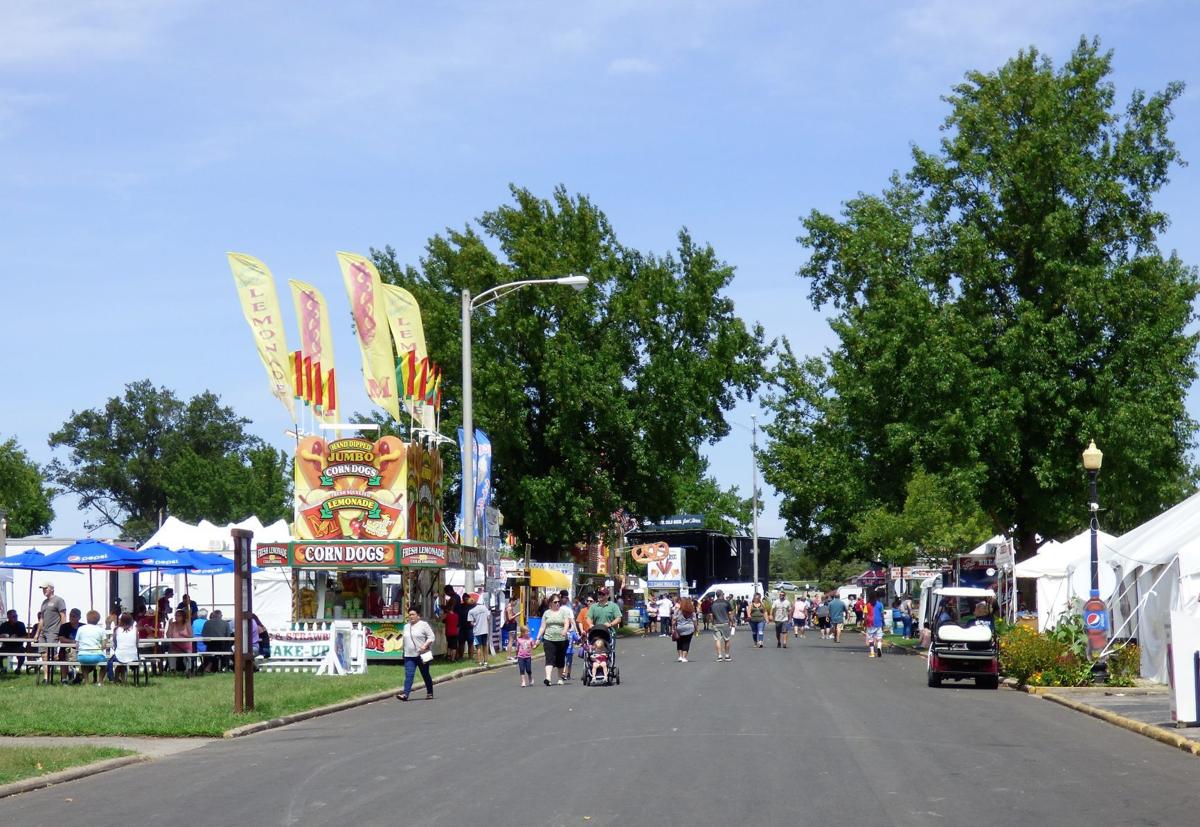 Grandstand Avenue vendors at the Du Quoin State Fairground were popular on Saturday during the first full day of the fair. 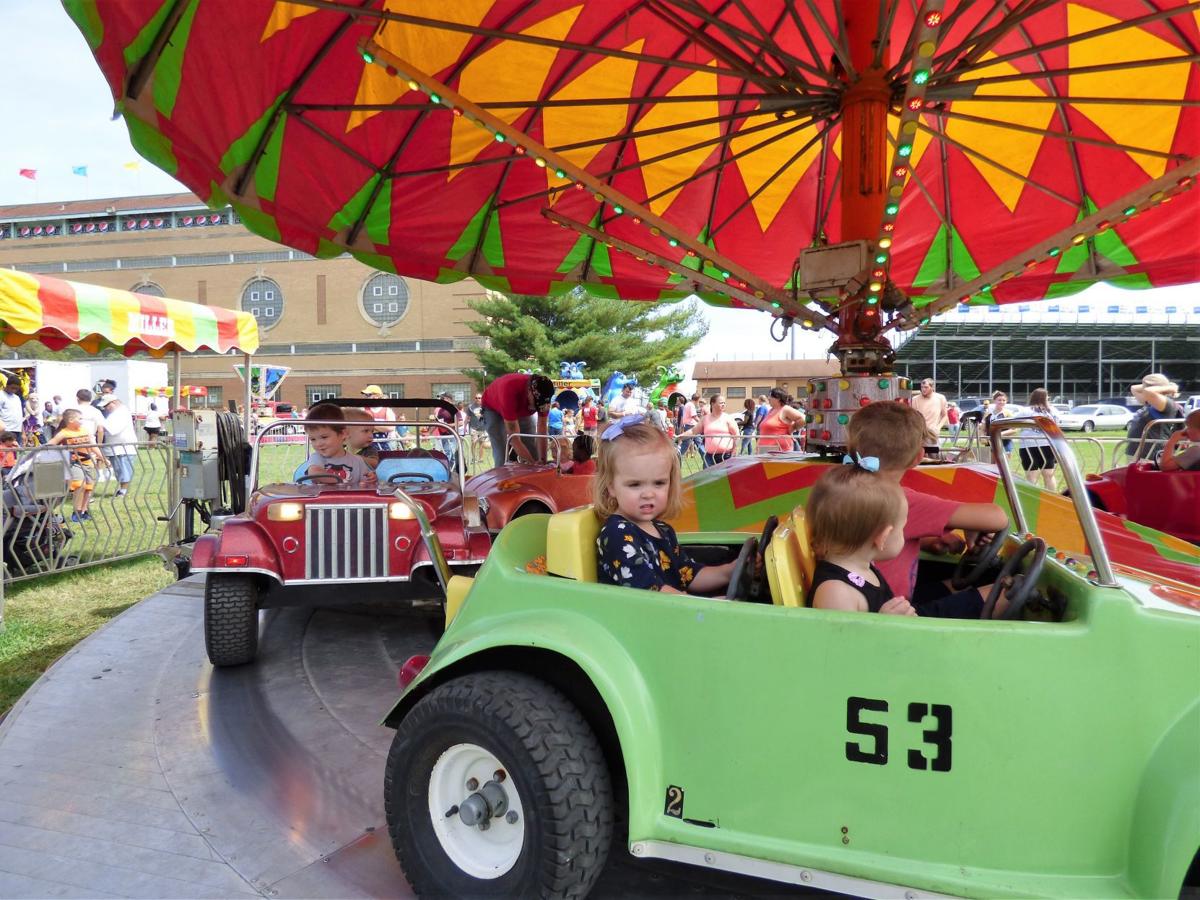 Lilly Hatfield, daughter of  does not like sitting in the back of car 53 on a ride in Kiddie Land at Du Quoin State Fair. She was happier when the ride started. 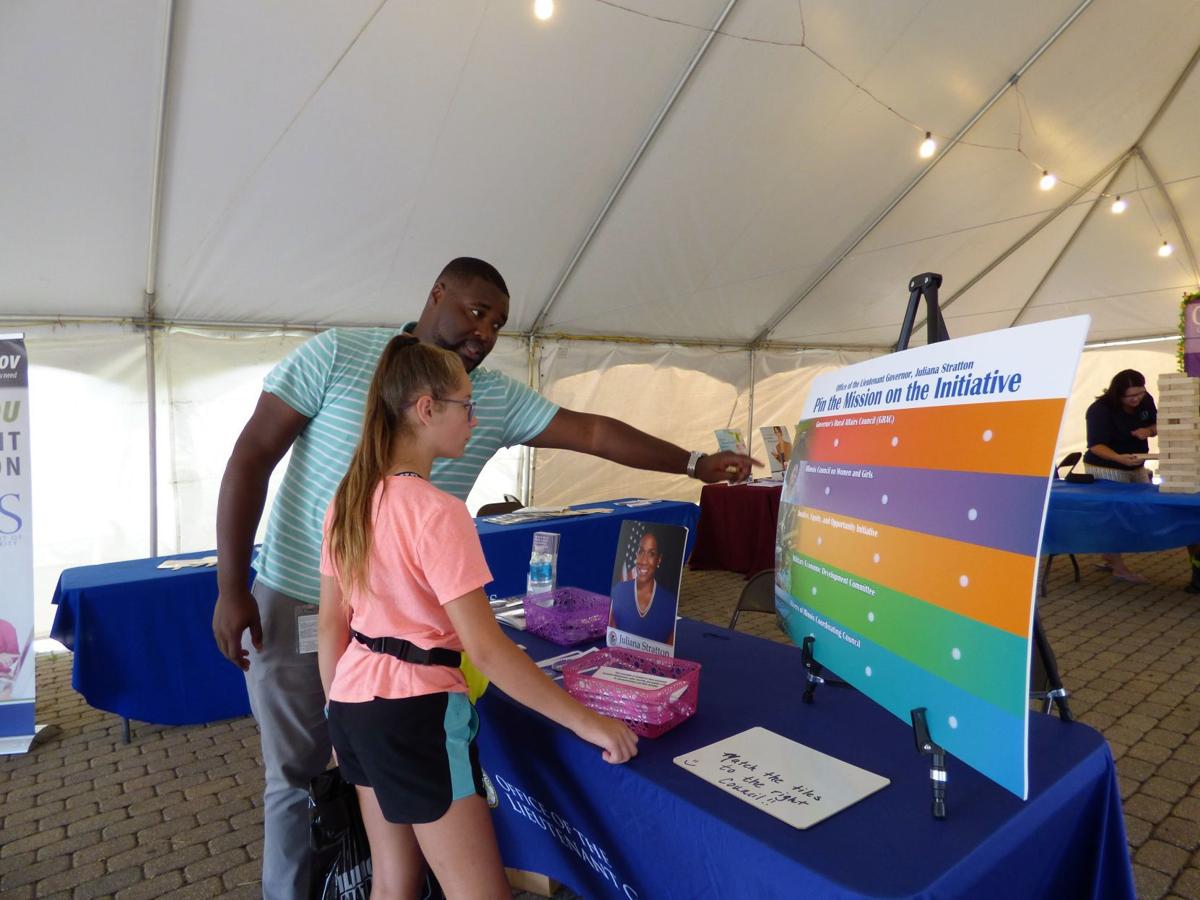 DU QUOIN The first weekend of the Du Quoin State Fair was supposed to feature harness racing, but John Demy, a race official from Hawthorne Racecourse in Cicero, said Mother Nature had a different idea.

Demy and other staff from Hawthorne are contracted to run the harness racing at Du Quoin.

“We were supposed to race at 7 p.m. Friday and today, but we were rained out last night. Track conditions, with it being a clay track, took in a lot of water which basically made it an unraceable surface,” Demy said.

Demy added that the track at Du Quoin is normally a fast track because of that clay dirt composition. The horsemen and race officials were ready to go, and people wanted to see races. Demy said they couldn’t take a chance of a horse slipping in the mud.

“It’s very disappointing,” he said. “The spectators are disappointed that we couldn’t put on a show for them.”

With races at Du Quoin State Fair returning to the weekend on Friday night with a Saturday matinee, race officials expected to break some records.

The horses will run the races that were scheduled for Du Quoin next weekend at Hawthorne. Some of those races include the Illinois Topline Stakes, County Fair Challenge, The Windy Skeeter, The Shawnee, The Pronto Don, Time Dancer, Darn Safe, The Governor’s Cup and the Dudley Hanover.

Fairgoers will find a new vendor at the fair, Sparta House of Wings. Kevin Wilkes was dishing up wings with special sauces he created, including a new sauce called Du Quoin Delish Sauce. Next weekend he will debut Saluki Sauce, in honor of SIU Day at the fair.

“This is not fried wings. We smoke every one,” Wilkes said. “What we are known for more than anything is tasty food.”

Race fans may have been disappointed the first full day of the Du Quoin State Fair, but children were not.

Lilly Hatfield was serious until the cars ride in Kiddie Land started. Lilly was at the fair with her parents Josh and Andrea Hatfield of Carterville. The family was attending the Pepsi MidAmerica picnic, just one of the many picnics scheduled at the fair.

Matthew Savin of Centralia and his children Noah, Adam and Trinity were playing games in the Lieutenant Governor’s tent. The tent has games to educate children about different issues in Illinois.

Five-year-old Marcus Jordan of Cairo was taking a break with his family in the Free Entertainment tent to eat ice cream. He had ridden just about every ride in Kiddie Land.

Reagan Lewis of Du Quoin spent the night with her grandparents, Steve and Launa Dinkins of Elkville, at the campground at the fairgrounds. She and her brothers came for the Twilight Parade and were having a good time at the fair.

“We got a bucket overflowing with candy at the parade,” Reagan said.

They rode bikes at the campground and rides on the midway. They also saw the Bubble Bus, a draft horse, cows, pigs and goats. The pigs were getting bathed in preparation for judging.

“I don’t think people realize how much is going on out here in the mornings,” Launa Dinkins said.

For more information and a daily schedule, visit the fair’s website, https://www2.illinois.gov/sites/dsf/Pages/default.aspx.

Purely dedicated: Behind the scenes with the volunteers for the Du Quoin State Fair kick-off party

DU QUOIN — One of the traditions at the Du Quoin State Fair is the annual kick-off party hosted by Wanda Rednour at her home on the fairgrounds.

Grandstand Avenue vendors at the Du Quoin State Fairground were popular on Saturday during the first full day of the fair.

Lilly Hatfield, daughter of  does not like sitting in the back of car 53 on a ride in Kiddie Land at Du Quoin State Fair. She was happier when the ride started.