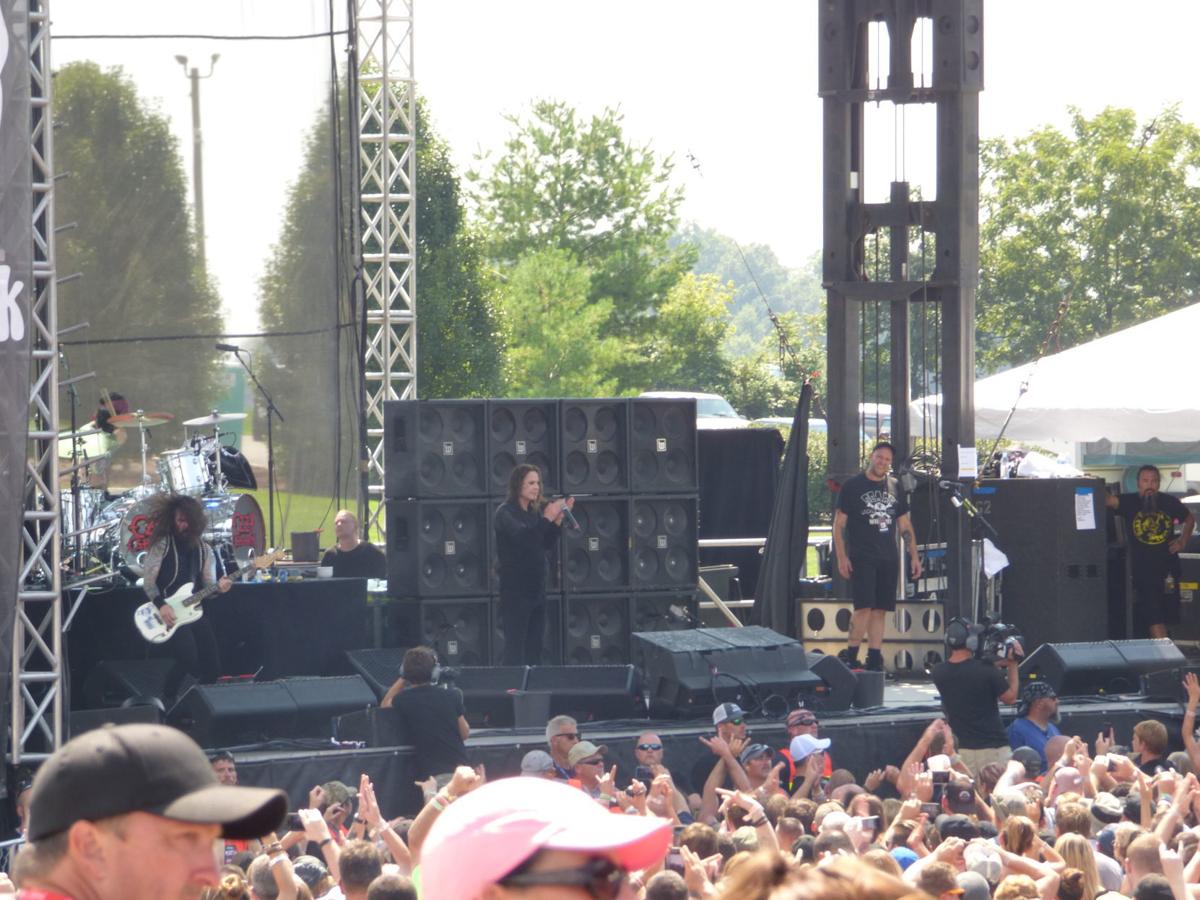 Prince of Darkness Ozzy Osbourne performs during a total solar eclipse on Aug. 21, 2017, at Walker's Bluff, near Carterville. 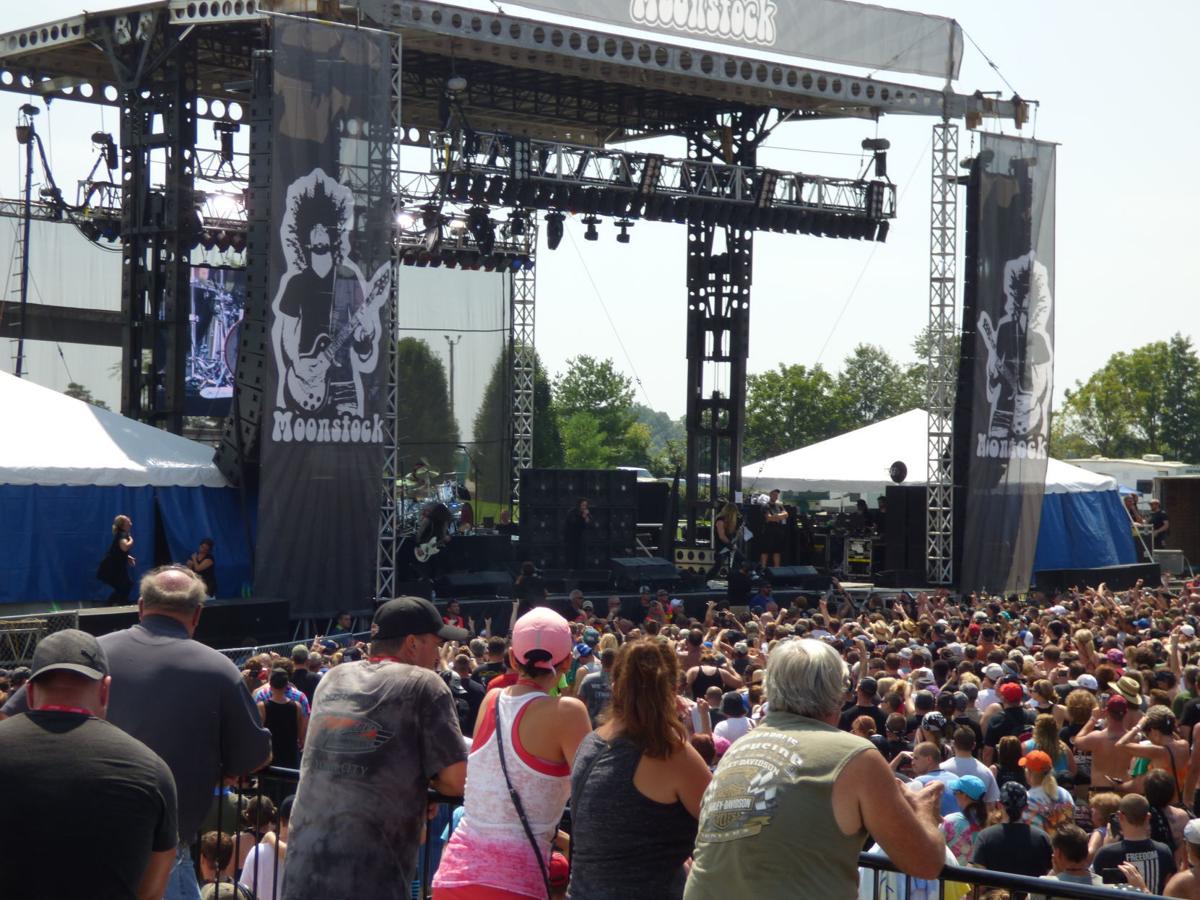 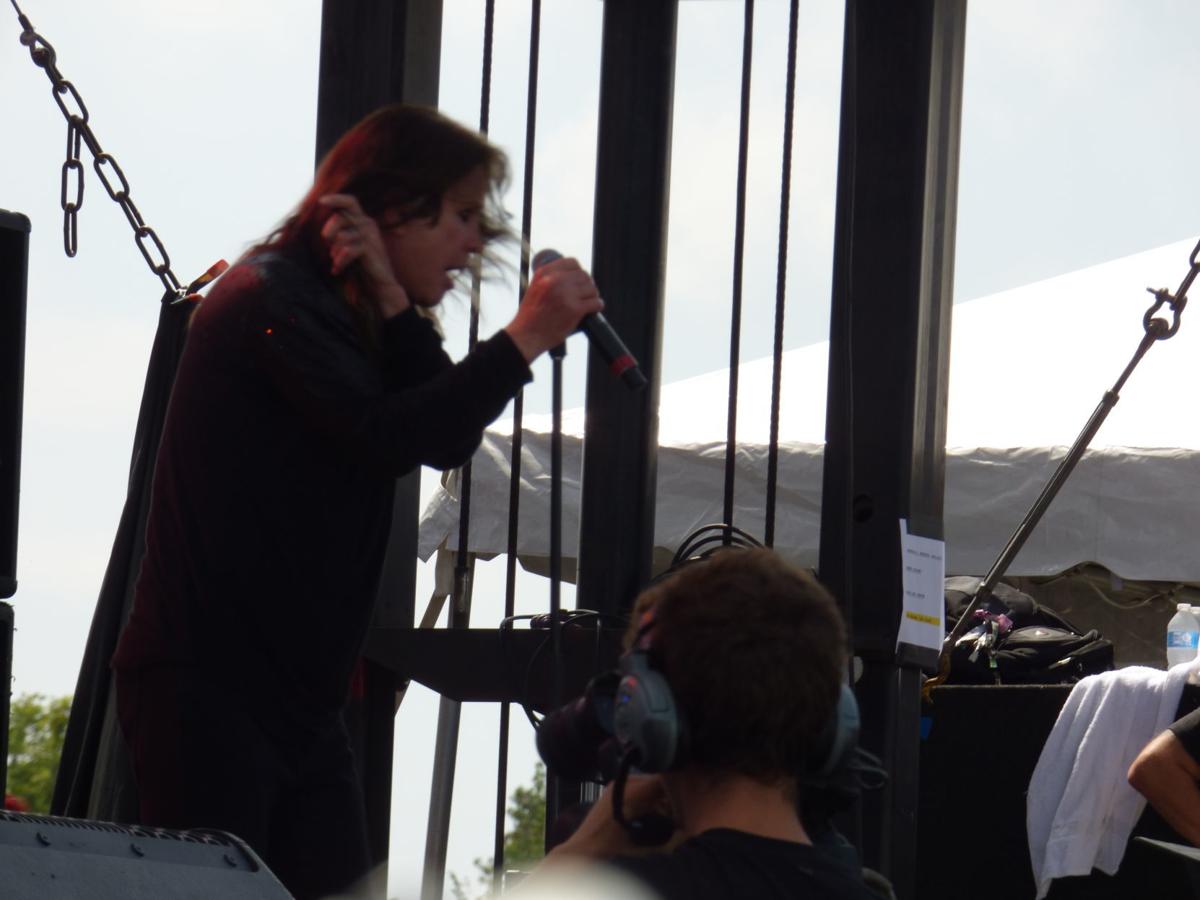 Prince of Darkness Ozzy Osbourne "barks at the moon" during totality Aug. 21, 2017, at Walker's Bluff near Carterville. 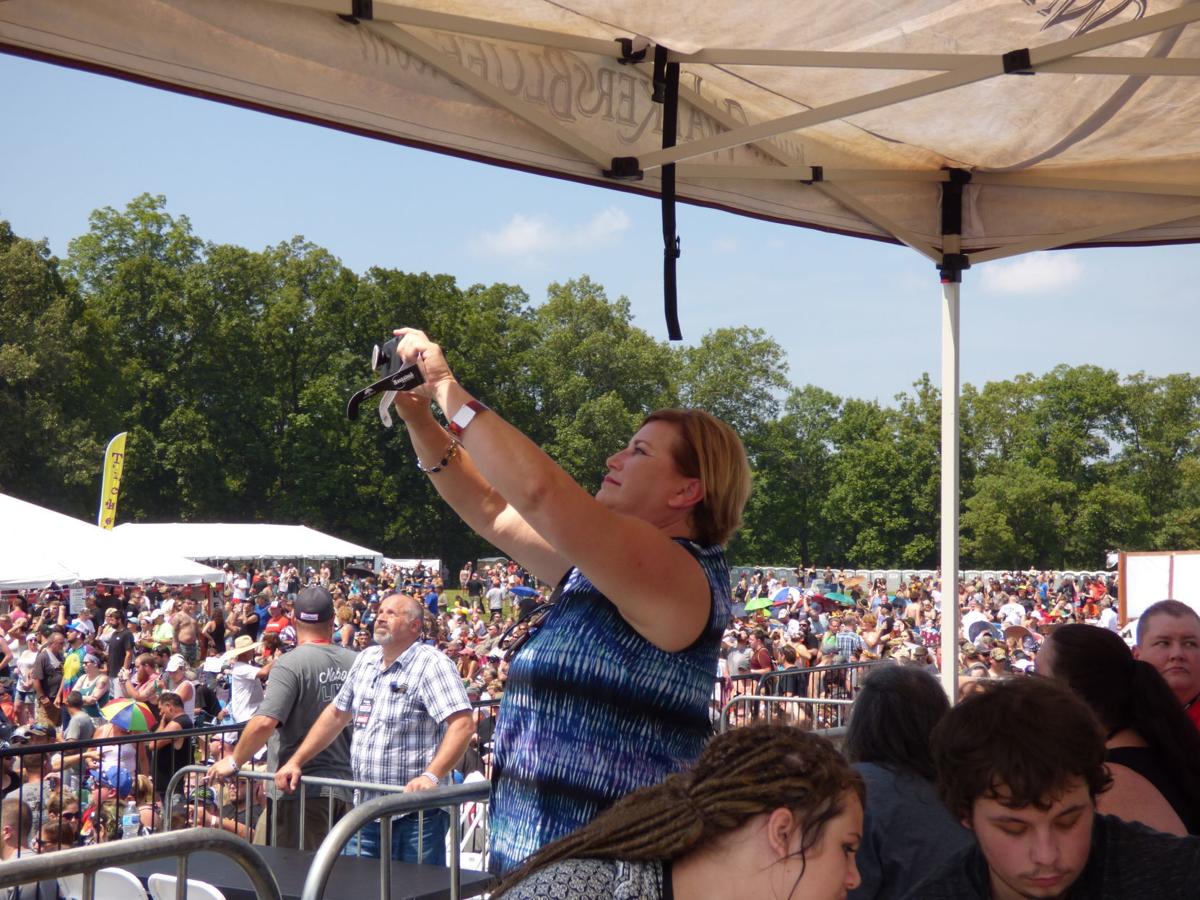 Walker's Bluff owner Cynde Bunch takes a picture of the crowd just before the Ozzy Osbourne concert during a total solar eclipse on Aug. 21, 2017, at Walker's Bluff. 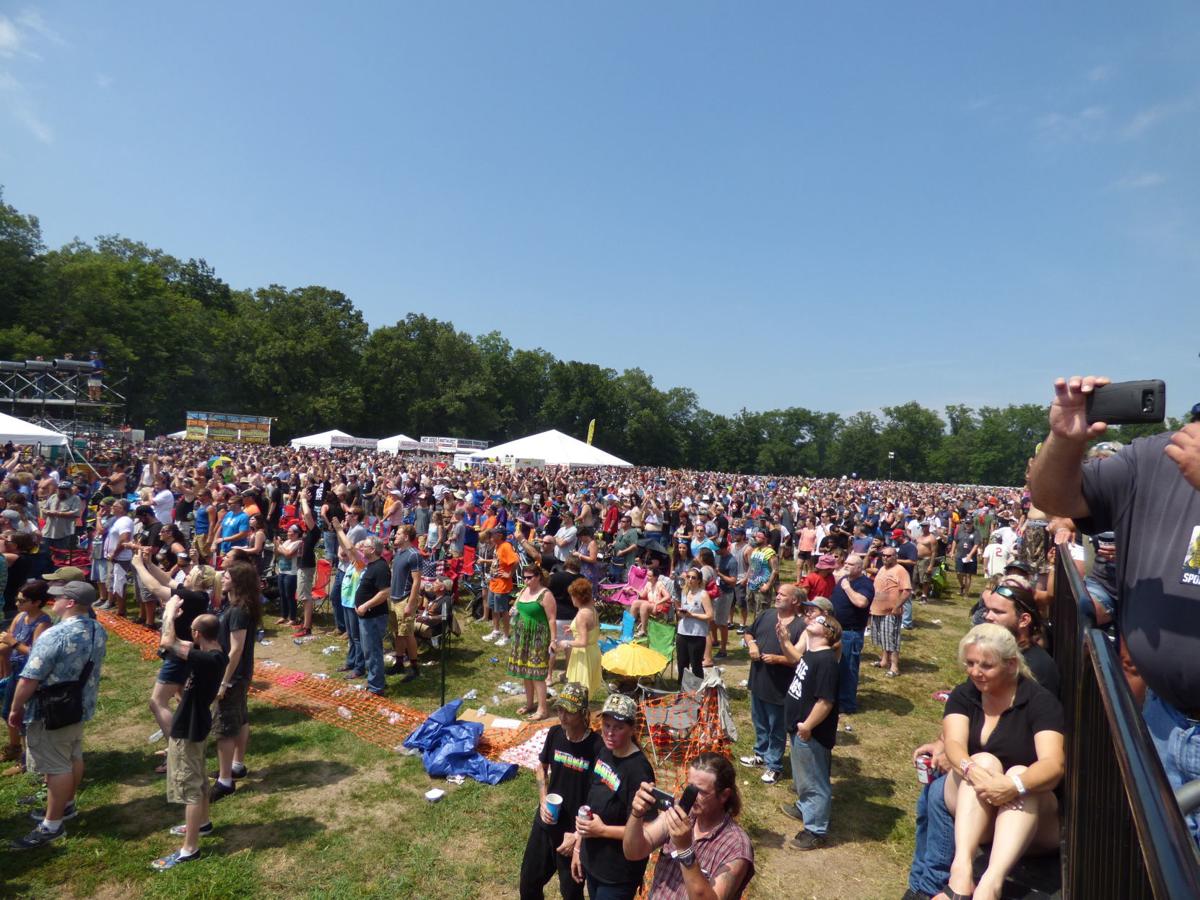 Fans of Ozzy Osbourne, prince of darkness, filled the area from the stage to the back fence during a total solar eclipse on Aug. 21, 2017, at Walker's Bluff, as this view from VIP seating shows.

CARTERVILLE — As the first diamond ring of the eclipse appeared, Ozzy Osbourne walked on stage at Walker’s Bluff and began to sing “Bark at the Moon” as the shadow of the moon swept across the crowd.

The crowd welcomed the cooler temperature and breeze that accompanied totality.

“I don’t think I’ve ever been in this part of the world before,” Osbourne told his fans. “I love you all. Thank you for coming to see me.”

Osbourne sang through the end of the eclipse, with only a few short breaks because of the heat. In addition to “Bark at the Moon,” he played a nice mix of hits from across the decades of his career, from his days with rock group Black Sabbath through his solo work.

The crowd was delighted. At some times with songs such as “War Pigs” and “No More Tears,” Osbourne sang one line, the crowd sang the next.

“It was awesome. It was dark and Ozzy was like ‘Bark at the Moon.’ It was so worth it,” David McDaniel of Jacksonville, Florida, said.

Phil Kappes of Pompano Beach, Florida, has been an Osbourne fan since his dad took him to see to see Osbourne in 1983. He was 11 at the time. He is such a fan that he has a picture of Osbourne tattooed on his right shoulder.

Kappes went to college in Missouri and Illinois, but had never been as far south in the state as Carterville.

“This is really cool. You are on two-lane roads and small towns, and all the sudden, you’re at this big vineyard,” Kappes said.

Fans were also excited to see guitarist Zakk Wylde. After Moonstock tickets went on sale, Osbourne announced Wylde would join him for his 2017 shows. Wylde has a 30-year history with Osbourne, playing with him three different periods from 1987 to 2009.

Kappes said he bought his ticket early, before the announcement that Wylde would join him. He said that was a bonus.

John Bunch, whose dad and stepmom own Walker’s Bluff, had some free time between his “official” duties to visit with a friend and grab a bite to eat in The Tasting Room.

“This is the biggest event we’ve had out here,” Bunch said.

Erica Garcia of Mission, Texas, flew to Chicago and spent a few days at the city’s breweries. She then took a five-hour train trip to Carbondale and an Uber ride from the train station to Walker’s Bluff to meet friends from Texas who drove to Southern Illinois.

“I’ve been to a lot of metal concerts and Ozzy’s the biggest,” Garcia said.

She said everyone she has met has been nice. The Uber driver even loaded her beer into his truck and unloaded, so she would not have to lift it. She also became an instant fan of Big Muddy beer.

Organizers expected nearly 12,000 people to see the eclipse and Osbourne at Walker's Bluff. Final numbers will not be in until later this week, but they seemed to be within a couple thousand of that number.

Cynde Bunch, owner of Walker’s Bluff, said one-fourth of the tickets sales were from outside the U.S.

“In the campground, we have 30 campers from different states and 12 camp sites rented by people from outside the country,” Bunch said.

The heat provided a few challenges for both organizers and fans attending the concert. A few people required treatment by emergency medical personnel. The response was quick and efficient.

Bunch said they worked with State of Illinois Auxiliary Police, meeting every week just before the event.

“They’ve done their job and done it well,” Bunch said.

Fowler added that the event had an incredible turnout. Moonstock shows why it is important to continue to lobby for a resort at Walker's Bluff, he said.

"Imagine the economic impact for the area, then think about the impact a resort would have," Fowler said.

‘It put us on the map’: As the dust settles, local officials reflect on eclipse mania

Photos: Southern Illinois had the best seats in the house on eclipse day 2017

Where were you five years ago on eclipse day 2017? From Bald Knob Cross to Saluki Stadium, our staff captured these awe-inspiring images from …

Prince of Darkness Ozzy Osbourne performs during a total solar eclipse on Aug. 21, 2017, at Walker's Bluff, near Carterville.

Prince of Darkness Ozzy Osbourne "barks at the moon" during totality Aug. 21, 2017, at Walker's Bluff near Carterville.

Walker's Bluff owner Cynde Bunch takes a picture of the crowd just before the Ozzy Osbourne concert during a total solar eclipse on Aug. 21, 2017, at Walker's Bluff.

Fans of Ozzy Osbourne, prince of darkness, filled the area from the stage to the back fence during a total solar eclipse on Aug. 21, 2017, at Walker's Bluff, as this view from VIP seating shows.