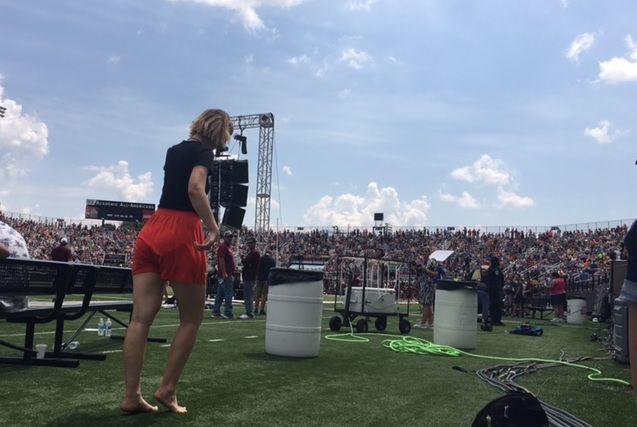 Among the many educational and entertaining aspects of the eclipse viewing event at Saluki Stadium Aug. 21, 2017, was the encouragement of participants to show off their "moonwalk" skills to a Michael Jackson medley. 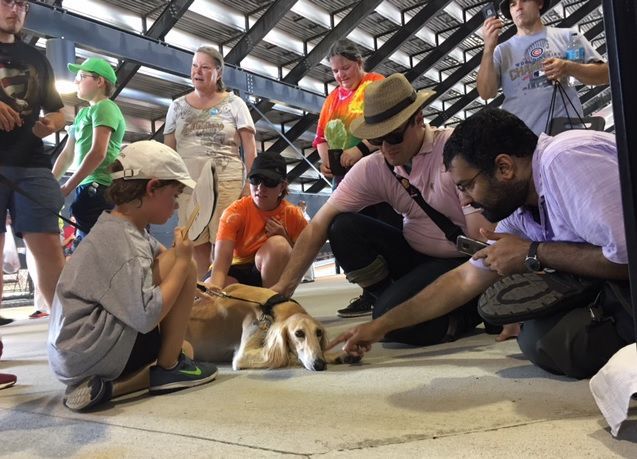 People from all over the world who attended the guided eclipse viewing event at Saluki Stadium on Aug. 21, 2017, were introduced to SIU's mascot via a few real-life furry friends. The Saluki is a native Egyptian hunting dog.

CARBONDALE — As a strange darkness blanketed Saluki Stadium just after 1 p.m. Aug. 21, the thousands of people who filled the bleachers grew quiet and still. Then, as the moment of totality began, all at once, the crowd erupted — in applause, screams of joy, stomping of feet, pointing, hugging, impromptu laughter and even some tears.

Saluki Stadium has hosted several large crowds and even witnessed a few emotion-packed nights over close wins or losses over the years.

But this was something else; it was celestial. The thunderous reaction emerged from a crowd subdued by a mix of the odd light, sweltering August heat and hours of anticipation — and came on fast and furious. The response was raw and electrifying at the same time, and seemed to rise from the basal instincts of humankind.

Maria Tome said it was as if time had been suspended during totality — which lasted about two minutes and 40 seconds. “Everything stops” she said, describing a scene she found so overwhelmingly marvelous that it brought tears to her eyes.

“The immensity of the universe, the strength of nature — it’s magic,” she said.

Tome traveled from Bordeaux, France, to Carbondale to watch the eclipse with her husband, Stephane Blanc, and her son, Matteo Maillet. It was the second one she’d seen — the first was in 1999 — and this total eclipse, just as the one she saw 18 years prior, did not disappoint, she said. “I thought it was amazing.”

Blanc said it was his first total solar eclipse, so he did not entirely know what to expect. He said that as the light grew dim, it seemed as if the mood in the arena changed, too. “It’s a strange light,” he said, “Like after a thunderstorm or something.”

“Then, when it reached totality,” he said, pausing, and drawing a breath — “it’s fantastic.”

Southern Illinois University Carbondale officials spent several years planning to host this eclipse event. The entire campus was open for viewing and many watched from the grounds. SIU hosted 14,000 people inside the sold-out Saluki Stadium for the guided experience.

The day’s events ranged from astronomy lessons on the serious end to audience members showing off their “moonwalking” skills, to some Michael Jackson hits on the lighter side.

Unfortunately, there was some cloud cover at the time of totality — despite the thousands of people who joined together in a chant encouraging the clouds to go away. But in the final few seconds, the clouds did give way for a partial diamond to appear, so the chanting must have worked.

At this sight, there was again an eruption of sounds from the crowd indicating astonishment and joy.

“I was bummed that we only got like 15 seconds of the corona,” said Mike Billitteri, of Minneapolis, who traveled to Carbondale to photograph the eclipse. “But it shined through the clouds so it was still amazing.”

Mat Kaplan, the host and producer of syndicated radio program Planetary Radio, who served as emcee of the event, said over the loud speaker at the conclusion of totality, “Congratulations, you have just been part of one of the greatest natural phenomenon in U.S. history.”

And that moment marked a wrap on a busy but overall successful few days that included moving in new students for classes that begin Tuesday, on top of SIU officials pulling off one of the largest and most complicated events in the school’s history.

According to SIU, the undertaking was made possible by the assistance of about 800 volunteers. The university provided more than 70,000 eclipse glasses to schools and organizations. In addition to members of the general public, the eclipse event at SIU drew amateur astronomers, scientists, more than 40 K-12 school groups and college students from 10 counties, 40 states and the District of Columbia.

Among the guests were hundreds of teens from Marian Catholic High School in Chicago. The students said they boarded a bus headed for Carbondale at 4 a.m.

Just before totality, as the sky darkened, Jalen Sledge marveled at the dimming light in the middle of the afternoon. “It looks like it’s 7 o’clock at night,” he said.

NASA streamed the coast-to-coast eclipse live from Carbondale. About 300 journalists from 80 news outlets requested press credentials, according to the university.

The Weather Channel and CBS News were among those live broadcasting on SIU’s campus Monday. SIU also worked in a few commercials showing off its campus and educational opportunities before the main event as thousands of people were packed inside the stadium — including many high school students who may soon be college shopping.

On a hilltop in Makanda, an eclectic group finds spirituality in totality

MAKANDA — On a hilltop west of Illinois 51, a special gathering of eclipse enthusiasts came together to celebrate Monday’s event.

‘It put us on the map’: As the dust settles, local officials reflect on eclipse mania

Opinion | Amy Fox: The Carbondale Eclipse: We did it!

As Dr. Seuss said, “Don’t cry because it’s over. Smile because it happened.”

The City of Carbondale is seeking feedback from the business community on their experiences over the busy eclipse weekend, according to a news…

Chaos in Cairo, total solar eclipse, SIUC restructuring: These are The Southern's top moments of 2017

The news staff at The Southern voted on the biggest stories of 2017 for Southern Illinois. Here are the top 10 stories that defined the year i…

CARBONDALE — In 2014, when Southern Illinois University Carbondale began preparing for the Aug. 21, 2017, total solar eclipse, there was no bl…

Photos: Southern Illinois had the best seats in the house on eclipse day 2017

Where were you five years ago on eclipse day 2017? From Bald Knob Cross to Saluki Stadium, our staff captured these awe-inspiring images from … 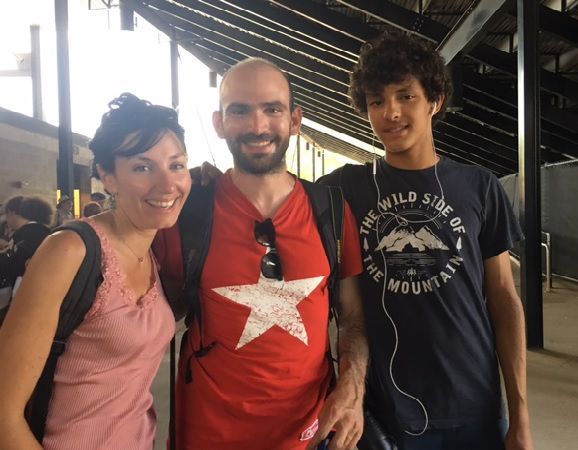 Husband-and-wife Marie Tome and Stephane Blanc traveled from Bordeaux, France, to Carbondale's Saluki Stadium to witness the Great American Eclipse 2017 event. Pictured on the right is their son, Matteo Maillet.

Among the many educational and entertaining aspects of the eclipse viewing event at Saluki Stadium Aug. 21, 2017, was the encouragement of participants to show off their "moonwalk" skills to a Michael Jackson medley.

People from all over the world who attended the guided eclipse viewing event at Saluki Stadium on Aug. 21, 2017, were introduced to SIU's mascot via a few real-life furry friends. The Saluki is a native Egyptian hunting dog.