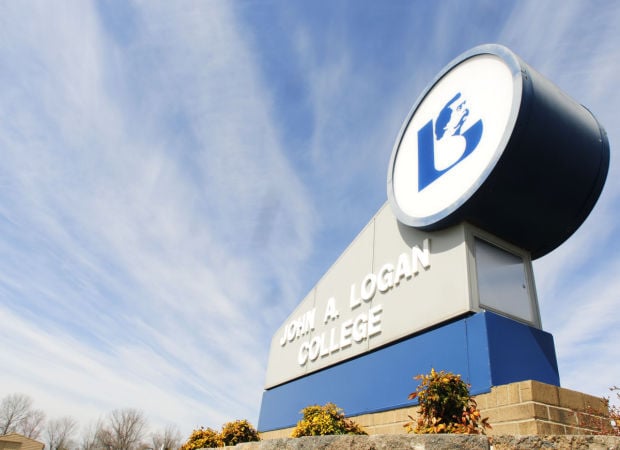 The entrance sign at John A. Logan College welcomes guests and students to campus.

So, with that, they were invited to compete in the laboratory’s prestigious 2017 Cyber Defense competition this past April.

Logan Defenders coach Mark Rogers said that there was a lot of curiosity as to how a small, Midwest college like John A. Logan College could have such a strong cyber security team.

“We were the only two-year college in the room. All the other teams were from four-year universities,” he said

Rogers said Argonne hosts these competitions, in part, as a recruiting tool for the cyber defense industry.

“You can’t open up a newspaper without seeing how valuable a degree in this field is. Last year, there were 1 million unfilled cyber security jobs in the United States,” Rogers said. “Our 46 students get a job offer as soon as they graduate.”

Burning Glass Technologies, which monitors the supply and demand for cybersecurity jobs, found that while cybersecurity job postings grew 74 percent between 2007 and 2013, those postings took 24 percent longer to fill than other information-technology jobs.

Rogers said that government agencies and private sector companies are looking at cyber competitions as a place to find future employees before they graduate. “Students who get a degree from our program can place in positions where the starting salary is $50,000. The need is that great right now.”

Karandeep Bedi will graduate Friday from JALC with dual associate degrees, one in computer forensics and one in cyber security. He intends to complete a degree with a four-year institution and pursue a career in corporate cyber security.

Bedi said the competition at Argonne asked the team to upgrade the security for the power and water networks of a fictitious country. While the team had a month to design a secure network that would hold up to attacks, the day of competition was not meditated.

“We didn’t know we were being attacked by until the moment it happened,” Bedi said.

The outcome, Bedi said, was that the team became incredibly focused.

“It was up to use to secure the water and the energy for a country," Bedi said. "What the other teams were doing didn’t matter. We had to concentrate and work together as a team to accomplish our own goal.”

Bedi said the environment mimicked situations the team would face in instances of government and corporate espionage.

“The attacks came in many forms," Bedi said, "from direct hits on the system, to one 'bad guy' secretly dropping microphones on the desks of each team to spy on what was being discussed.”

Students, like Bedi, who learn to detect and repel attacks on network infrastructure are becoming valuable commodities in the marketplace, not just for he jobs they fill, but for the money they save their employers.

A 2014 Price Waterhouse Global Economic Crime Survey found that 7 percent of U.S. organizations lost more than $1 million each to cybercrimes between 2011 and 2014, and 19 percent lost between $50,000 and $1 million each for the same time period.

Rogers, who is also an associate professor at JALC, formed the team after reading about the competitions that other schools attended.

“I thought we can do better than that," he said. "I knew I had really talented students, so I asked them if they wanted to compete. They said yes and the rest is history.”

The Defenders now have 12 students on the team and six to eight compete at any one time, many of whom began working in their associate degree with little or no computer experience.

“Of course we have students who can do Linux blindfolded,” Rogers said, “But some of them came in knowing how to do little more than turn on a computer and use the mouse and keyboard to browse the internet.”

Rogers said the students who succeed in his program do so because they are comfortable outside of their comfort zone. “They enjoy thinking critically and solving puzzles. They are also not afraid of failure, as they are going to get a lot of wrong answers, and run into a lot of dead ends.”

Kylee Williams, who was once a member of the team, is now the Defenders assistant coach and an adjunct faculty member at JALC and said the team does more than just compete.

“We get the students out into different environments to perform community service," she said.

Williams said that along with working with local Boy Scout troops, the team has held computer service days, has worked with local elementary schools students, and participated in the Black Diamond Harley-Davidson backpack giveaway to talk to parents and kids about cyber safety and cyber bullying.

Rogers said Lora Hines, the department chair for Business, Computer Science and Mathematics, has been an invaluable support to the team, and has found resources to keep the students competing.

Hines said that even in the face of the state budget crisis it is important to make sure the students have the resources they need.

“We worked with what we had," Hines said, "and found a way to make sure the students could attend the competitions they needed to attend.”

Hines also said the college was recently awarded a Center of Academic Excellence designation from the National Security Association and Department of Homeland Security. Only one other community college and six universities in Illinois have this designation.

This article has been changed to reflect the correct spelling of Mark Rogers' and Kylee Williams' name.

JALC Board of Trustees meets to discuss initial budget

This article has been updated to correct Scott Elliott's last name. The correct percent increase in total operating fund expenditures was also…

The entrance sign at John A. Logan College welcomes guests and students to campus.