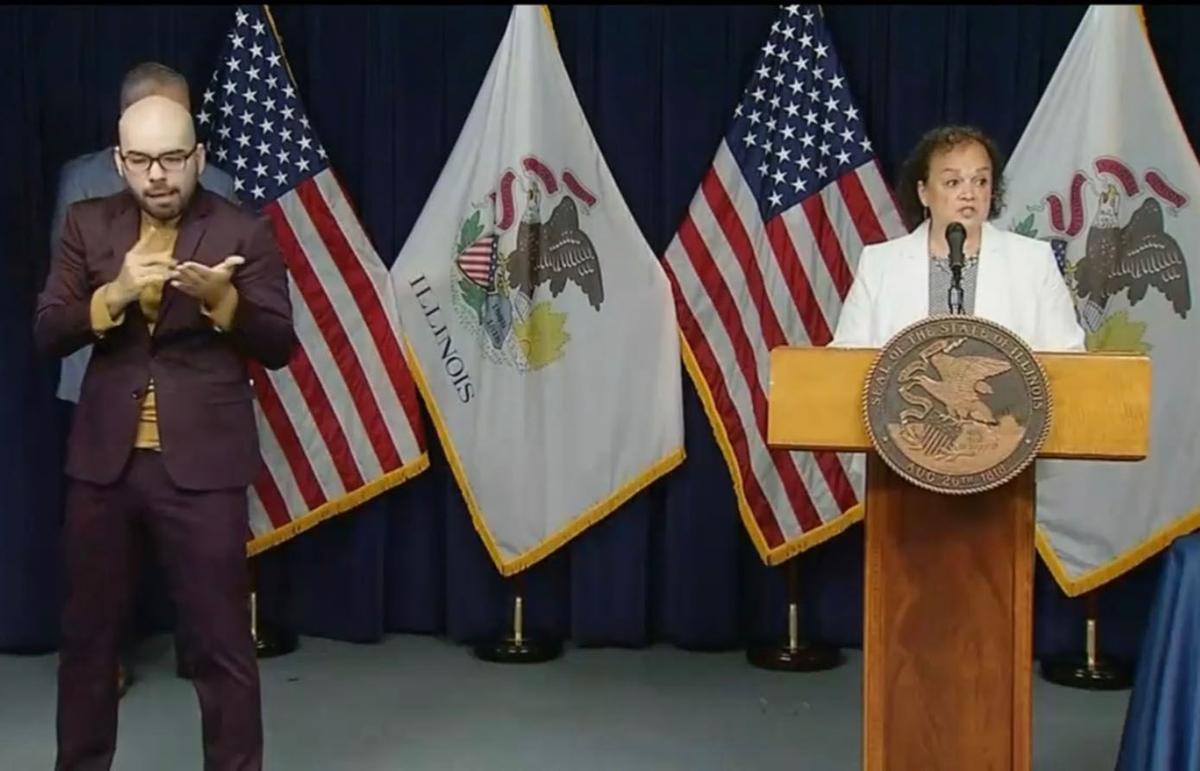 Illinois Education Superintendent Carmen Ayala talks about the reopening of Illinois schools to in-person instruction in the fall during a news conference Tuesday in Chicago. 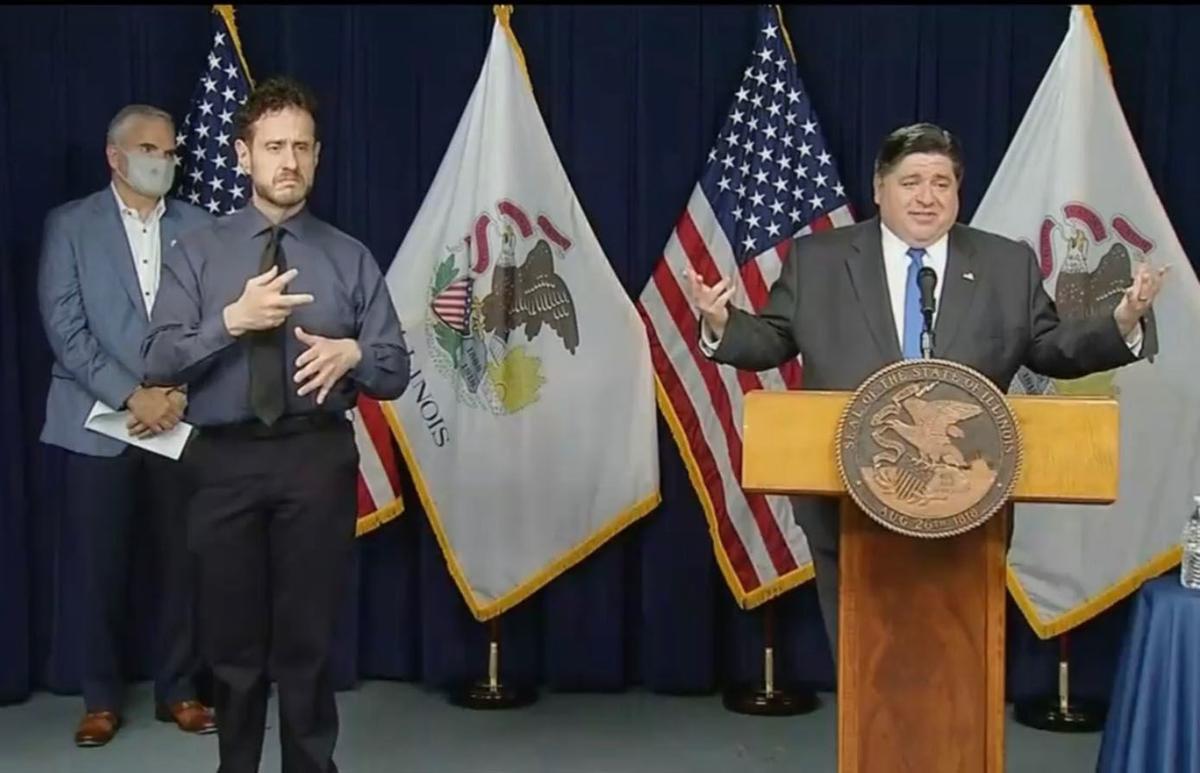 Gov. J.B. Pritzker answers reporters' questions about the state's guidance for Illinois schools to reopen in the fall during a news conference Tuesday in Chicago.

SPRINGFIELD — Illinois released new guidelines for schools, colleges and universities to return to in-person learning in the fall, but leaders warned those plans could change if health metrics related to the COVID-19 pandemic stop improving.

“This fall will not be business as usual, and we will update our guidance as needed,” State Superintendent of Education Carmen Ayala said during a news conference Tuesday in Chicago. “In response to challenging and changing public health conditions, schools and districts must be prepared to return to remote learning if the virus surges again.”

Students and teachers will be required to wear face coverings if they are medically able, gatherings in one place will be limited to no more than 50 people, and schools must adhere to stricter cleaning and disinfecting guidelines as well as conduct regular symptom checks.

Gov. J.B. Pritzker said at the news conference that every district must develop its own plan based on those guidelines. Ayala added districts and individual schools will soon send additional information to parents and students.

Pritzker said the Illinois Emergency Management Agency will provide public K-12 districts in Illinois with 2.5 million cloth face masks, allowing schools to provide one to all students and staff.

Universities and community colleges will have similar guidelines for a fall reopening, including social distancing and physical spacing requirements, hand sanitizing stations, face covering requirements and symptom monitoring. Schools are also developing policies around traffic flow, cleaning of public spaces and staggered schedules for the use of laboratories, auditoriums and other group facilities, according to guidelines.

At this time, the governor’s office said, colleges expect dormitories, cafeterias, libraries, bookstores and other amenities to be available to students provided they meet approved guidelines.

If someone in a school tests positive, those who were in close contact with them — that is, within 6 feet for 15 to 30 minutes without a face covering, according to Dr. Ngozi Ezike, director of the Illinois Department of Public Health — would be expected to quarantine for 14 days.

Pritzker said local and county health departments will play a major role in deciding a path forward when such a positive test occurs.

Ezike said the reopening being allowed this fall is the result of significant declines in new cases, deaths and hospitalizations since the peak of the pandemic in Illinois.

Those declines, she said, are the result of the vast majority of Illinoisans following basic safety guidelines that include frequent hand-washing, wearing face coverings when in public and practicing social distancing.

The fact that the state reports about 20,000 to 30,000 test results daily helps as well, she said. Nearly 1.4 million tests were completed in Illinois since the pandemic began, including 20,507 over the previous 24 hours.

Those yielded 601 new confirmed cases of COVID-19 — a 2.9% positivity rate. There were another 38 virus-related deaths over the previous 24 hours, bringing the statewide totals to 137,825 cases and 6,707 deaths. Ezike said the state has had five consecutive weeks of declining new cases and fatalities, and the statewide positivity rate from June 16-22 is 2%.

As of midnight Monday, there were 1,648 patients hospitalized for the disease including 424 in intensive care units, 236 of whom were on ventilators. While those all represent sharp declines from the peak of the pandemic in April and May, the total hospital beds in use increased by 20 from the previous day, and the total intensive care unit beds increased by five from the previous day while ventilators used continued to decline.

In advance of schools reopening, Ezike strongly encouraged parents and guardians to make sure their children are up to date on their vaccinations and that all Illinoisans get caught up on basic wellness procedures, including cancer screenings. She noted there have been steep declines in those procedures since the pandemic began.

“We need to make sure that the kids get checked out by their providers and get their life-saving immunizations,” she said. “Yes, there could be another surge of COVID-19 in the fall or perhaps earlier, but let's make sure we take this opportunity now to get to our doctors, let's get our immunizations, let's get our health screenings, let's get as healthy as we can. Your baseline health status affects how you fare against this virus.”

“Dr. Ayala and I are encouraging all districts to use this funding to close the digital divide by providing devices and internet connectivity and are directing the majority of the remaining funding to purchasing laptops, tablets, virtual coaching for new teachers and internet connectivity to advance a vision of equity for our schools and keep our kids on track for success,” the governor said.

Pritzker’s office said the Illinois State Board of Education will use another $54.1 million in CARES act funding to provide funding to schools in six categories: laptops and tablets, internet connectivity, virtual coaching for teachers, professional development, and support for entities that cannot receive direct funds.

— Peter Hancock contributed to this report

Southern Illinois school officials got their first glimpse of rules for in-person learning for the next school year on Tuesday and began planning to implement them before the mid-August start of the school year.

Illinois Education Superintendent Carmen Ayala talks about the reopening of Illinois schools to in-person instruction in the fall during a news conference Tuesday in Chicago.

Gov. J.B. Pritzker answers reporters' questions about the state's guidance for Illinois schools to reopen in the fall during a news conference Tuesday in Chicago.