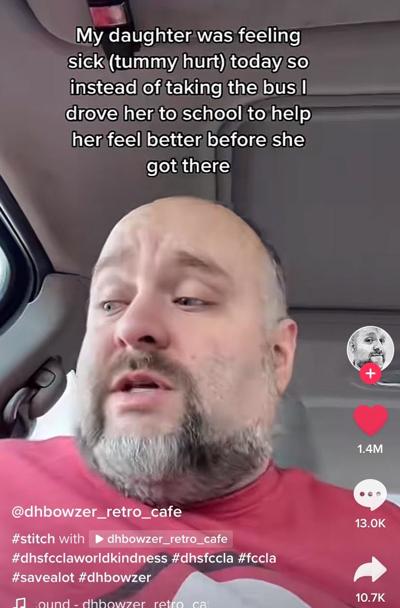 DuQuoin High School’s Family Career and Community Leaders of America club recently went viral on TikTok for an act of kindness that touched a man’s heart.

The video, posted by Derrick Bower on Friday, has received over 1.4 million views and shows Bower expressing gratitude for the thoughtfulness of the students.

“Thank you so much for what you are doing,” Bower said in the video. “You touched me today, you gave my kids something to eat tonight.”

The FCCLA club members were passing out $20 gift cards outside of the town’s grocery store for World Kindness Day.

In one of the TikTok videos Bower posted, he said he stopped back by to thank the students for the gift card. He tears up during the video when he mentions that he didn’t know what he was going to do for dinner that night, so the students gave him a second gift card.

The students chose to spend money on the cards to re-invest in their community after a good year of fundraising, the card reads.

On TikTok, Bower starts crying in the video and says:

After the video went viral, Bower made another video thanking those who were calling the school to make additional donations.

“This viral TikTok video ... from a recipient of their kindness shows how CTE and FCCLA is vital to students and communities nationwide and how we can help those around us,” the national FCCLA group posted on their Facebook.

Last year, Union County CEO group came up with an idea that could fight the pandemic and sold Christmas boxes.