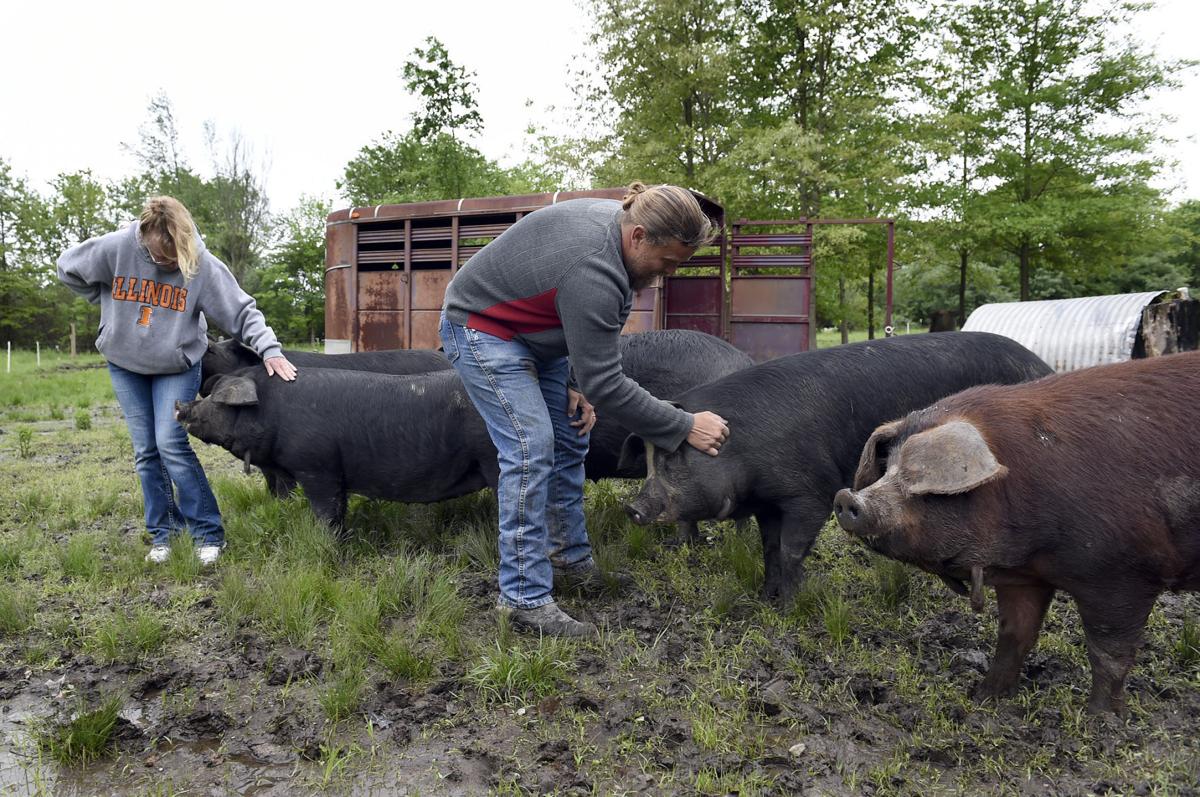 Tina and Roger Schuttek, owners of Big Muddy Hogs, check on their sows on Monday afternoon outside of Hurst. 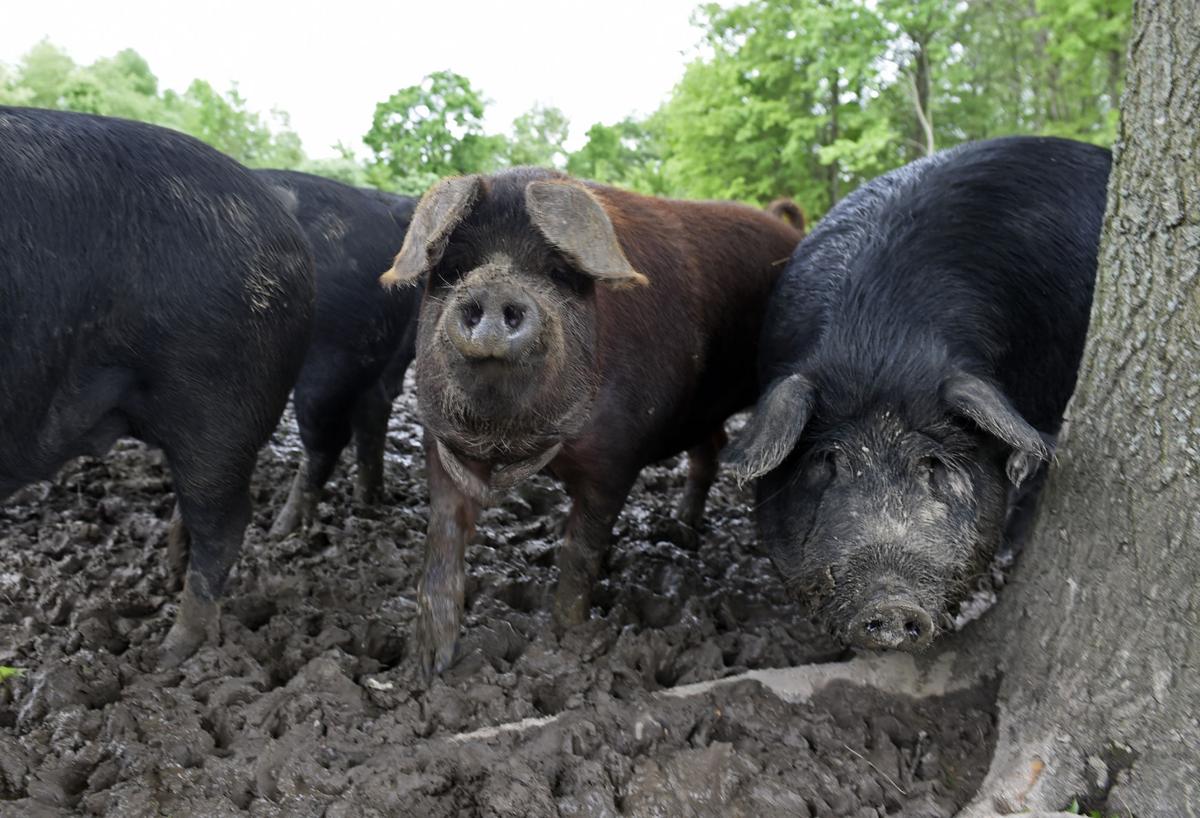 Pigs at Big Muddy Hogs enjoy the mud on Monday afternoon outside of Hurst.

Just over the railroad tracks, at what might best be described as the corner of Hurst and Bush, is Big Muddy Hogs, one of the few small team hog farms in the region.

Owner Roger Schuttek, and his partner Tina Benz, have been in the livestock business for about six years and are perfectly poised to capitalize on the farm-to-table movement sweeping the country.

Schuttek said he tries to raise all the animals on the farm with an eye toward what is organic and sustainable. This extends to how the business started and continues to run.

“We started off with a half-dozen chickens when we first came out here,” he said, “but then Tina saw a pig on Craigslist and things kinda took off from there.”

Benz said "initially, I was just looking at one pig, but then Roger said ‘you can’t get just one’ because they are such social animals. And so we got two or three more.”

And, now, Big Muddy Hogs has 12 breeder sows, two boars, and about 50 feeder pigs. The feeder pigs, of course, are those animals raised for harvest.

All the animals Schuttek and Benz raise on the farm, as well as on a strip of ground that follows along the railroad tracks, are free range.

“We use about 30 acres, and a lot of that we lease from the railroad,” Schuttek said. “A lot of the ground around here is former mining land, and it’s been left to grow over, which suits us just fine as the pigs are foraging animals and have no problem with a rough landscape.”

He said as the hogs are rotated from pasture to pasture, they help to clear out the invasive species that have grown into the countryside.

“You can put them in an area covered with Jerusalem olive, and all kinds of pricker bushes, and they will strip it down, turn over the soil and fertilize it all at the same time, which leaves it in better condition for other uses,” Schuttek said.

In the summer, the hogs generally eat what they find. But, Schuttek said during the winter, they get hay, grains milled on the farm, and mineral supplements.

In addition to raising the hogs, the farm also sports a flock of about 200 chickens, which Schuttek and Benz sell at the Neighborhood Co-op in Carbondale, as well as in the small farm store they operate on the grounds. Schutteck said the store is open 8 a.m. to 6 p.m. every day and he encourages people to come check it out.

“I work with an eye toward sustainability and transparency, and the easiest way to stay transparent is for people to come have a look at what we do,” he said.

Schuttek said that part of being sustainable is having the appropriate number of animals for the acreage they are kept on, and that they keep 100 to 200 hogs, depending on time of year. He is working with a few different breeds, all of which are heritage breeds, to produce the feeder pigs he raises.

“I’ve got Red Wattle, Mulefoot and some black pigs.” he said.

According to Slow Food USA, a nonprofit organization dedicated to preserving local food traditions, the Red Wattle hog is listed on the ALBC Conservation Priority List as being critically endangered. This means there are fewer than 200 annual registrations in the U.S., and the organization said there are fewer than 2,000 individuals raising this breed on a global level.

The Mulefoot hog, also a heritage animal, is an American breed with a solid hoof which resembles that of a mule. According to Slow Foods, the Mulefoot peaked in popularity with breeders in the Midwest about a century ago. But as the amount of area for foraging decreased and the practice of feeding hogs in pens increased, the hogs fell out of favor.

The large black is also listed as endangered by the American Livestock Breeds Conservancy, with fewer than 300 registered breeding hogs living today. The meat is known for being darker than the average hog and has a reputation for being great for bacon.

“All these animals have awesome meat,” Schuttek said, and offered that the natural of pork is actually a healthy pink to red in color, which can be very different from what is usual commercially available. “The Red’s meat is lean and juicy and the Mulefoot has a high fat content, so the marbling is great. These are absolutely the opposite of a factory market hog.”

Schuttek’s operation is the opposite of what would be found in factory farming.

“What I really want to get through to the people the most is these pigs are antibiotic free, and that they are humanely treated and raised," he said. "That is why we do what we do. To make sure that there is an alternative to the factory farm confinement meat.”

Even at the end of their life, Schuttek does his best to see that things end well. While he does not butcher the hogs himself, he engages another local business, Triple C Meats in Anna, to handle that part of the process.

“They know when I show up that they are going to have to let me take my time," he said. "At no point in this process do I let the animals get stressed or upset."

Schuttek believes that an animal deserves to be treated humanely and with respect for the duration of its earthly existence. It deserves healthy food and water, and good living conditions.

“The meat from animals raised under duress or killed in conditions that produce heavy stress simply don’t taste as good.” he said.

According to The Journal of Animal Science and researchers at the University of Milan's Faculty of Veterinary Medicine, tests recently confirmed that “fear experienced during slaughter significantly elevates meat's levels of stress hormones — adrenaline, cortisol, and other steroids.” The elevation of these hormones, the study showed, changes the PH level in the meat, which changes its quality.

“Big Muddy raises happy pigs, and that is important to me," said Nick Stewart of Cristaudo’s Café, Bakery & Catering in Carbondale. "I grew up in Iowa where the pork industry is, so there are a lot of corporate pig farms, but the best product comes from the local establishments that farm more sustainable and more humanely.”

Stewart said it was difficult for him to source plain ground pork as most producers immediately turn their meat into sausage.

“I don’t use sage in my sausage, I use rosemary, so to find the meat in its pure state was awesome,” he said.

“We’re lucky. In addition to our operation, Lick Creek Beef and Pork is operating in Buncombe, and Sorensen’s Heritage Farm is producing out in Thompsonville, as are a host of other smaller livestock farmers in the region.

"If you are not taking advantage of that fine level of produce, you are missing out.”

Tina and Roger Schuttek, owners of Big Muddy Hogs, check on their sows on Monday afternoon outside of Hurst.

Pigs at Big Muddy Hogs enjoy the mud on Monday afternoon outside of Hurst.