HARDIN — At 3 a.m. on May 6, Curtis Smith watched floodwaters bubble up through the hardwood floors he’d just refinished.

That’s when he surrendered it to the Illinois River.

Before that, every hour on the hour — for an exhausting 48 hours — Smith had filled his overworked sump pump with gas so that it could keep going. “I’d put 1 gallon of gas in the tank, close my eyes for a little bit, listen for it to start sputtering, and do it again.”

Conceding he’d lost the battle, “I woke up my wife and told her, 'It's time to go,'” he recalled of that moment six months ago Wednesday.

When the Smiths purchased their home six months prior on the eastern edge of Calhoun County in the tiny village of Hardin, they decided to skip flood insurance.

“If I had known I’d lose my house the first year, I would have paid it,” he said.

The home took in 4 feet of standing water in the main level. It’s essentially ruined. It would cost far more to repair the home than it’s worth, he said. They can’t live there. But they still must make monthly house and insurance payments to his parents, who bought it outright and sold it to them contract-for-deed because they were unable to qualify for a traditional bank mortgage.

James Sink, the regional flood insurance liaison for the Federal Emergency Management Agency, said that stories like this are all too common.

“Everyone needs to have flood insurance,” he said. “Anywhere it rains, it floods.”

Flooding, he noted, is the most common cause of disaster-related damages in the United States. The vast majority of standard home insurance policies do not cover flooding. To ensure coverage, most homeowners must purchase a separate policy backed by the federal government under the National Flood Insurance Program. Managed by FEMA, Congress created the program in 1968 to offer primary flood insurance to properties with significant flood risk as many private insurers stopped offering coverage. It was designed to reduce escalating costs associated with helping flood survivors recover losses.

Yet many homeowners still forgo it, even in floodplains. Anyone with a loan on property in a high-risk area that is insured or regulated by the federal government must buy flood insurance. But there’s no such requirement for others.

And while there are federal and state programs designed to help people recover from disasters when insurance claims are denied, or they lack coverage altogether, these programs are limited, and sometimes not made available at all.

This year’s historic flood event along the Mississippi and Illinois rivers has served as a harsh reminder of how uncertain recovery assistance is in the wake of a disaster.

Some East Cape flood victims live in crumbling homes or are displaced. FEMA has denied the state's request for help.

Following the flood event that spanned from February to July, local, state and federal emergency management officials identified $8.2 million in uninsured losses related to the flood. Citing that figure, and the fact that many affected households earn low or modest incomes, the state of Illinois has sought federal help from Federal Emergency Management Agency to help them recover. But FEMA has denied homeowners access to its Individuals and Households Program, saying the disaster in Illinois did not rise to a level of severity and magnitude to warrant it. The state is appealing the decision.

Some, like the Smiths, as well as others in East Cape Girardeau featured in a Sunday article in The Southern, did not carry flood insurance. In other cases, homeowners with flood insurance may have had their claims denied because their homes suffered damage when they experienced seepage in their basements, rather than from floodwaters entering the main level, according to area residents and two state lawmakers.

Sen. Dale Fowler and Rep. Patrick Windhorst, whose districts include Alexander County — home to East Cape Girardeau — both said they had heard concerns about insurance coverage denials related to damage from seepage. They both said they lacked concrete details at this time, but are looking into the matter and if they can do anything to assist.

Sink, with FEMA, said that the National Flood Insurance Program defines a flood as water flowing over normally dry land affecting two or more properties or 2 acres in a rural area.

But there are some gray areas with flood coverage, he said. For instance, damages caused by seepage and sewage backup can be covered if it can be shown that the problem was directly caused by flooding, even if floodwaters did not reach the home. But it’s also possible to be in an area affected by flooding and an adjuster determine that the flood was not the direct cause of the basement seepage.

Complicating matters, a handful of families in the East Cape Girardeau and McClure area have suffered damage related to sinkholes. Coverage for sinkhole damage is even more ambiguous than for flood-related seepage. A claim typically requires an engineering assessment to determine the direct cause, Sink said.

Still, he suggested that anyone with coverage whose property has suffered damage from a flood event file a claim. He also noted that homeowners can exercise appeal rights if an initial claim is denied.

In order for homeowners to access flood insurance, their communities must volunteer to participate in the program. In exchange for offering access to federal flood insurance for homeowners, participating local governments are required to create minimum floodplain management standards and adopt minimum mitigation standards. There are more than 22,000 participating localities across the nation, including hundreds throughout Illinois.

Floods account for 90% of declared disasters in the state, and some 250,000 structures are located in floodplains, according to the Illinois Department of Natural Resources, the state coordinating agency for the National Flood Insurance Program.

Ron Davis, IDNR’s mitigation program manager, said participation is not as high as it should be. The state, however, does offer other programs outside of direct FEMA assistance that can help after a flood. A buyout program administered by the state is one key part of the state’s mitigation strategy, he said. Davis noted that the state is in the process of helping the village of Hardin buy out some homeowners who were affected by this most recent flood. Smith said that program may end up being a lifeline for his family, though they still face significant challenges in rebuilding their lives.

Smith said he still struggles with his decision not to get flood insurance and won’t make that mistake again.

The real estate agent told them that the retaining wall around the property would likely protect it from high waters. Smith considered a policy anyway, and went so far as to get a price quote. He was told it would cost them about $2,500 a year, which would have more than doubled their annual housing payment, because their home is located in a high-risk area. The couple felt like it was more than they could afford. He has two jobs working as a butcher at the grocery store, and clerk at the gas station. His wife takes nursing classes at night, and works part-time at the same gas station. The couple moved here from Peoria, where he’s from, and where she was attending college. She wanted to be closer to her grandmother, and when they found their house, they thought it was the perfect place to start their lives together as a married couple.

Today, the couple and their pets — four dogs and a cat — are living in a trailer they purchased that’s parked in her grandmother’s driveway. She offers to let them stay inside, but they wanted their own space with all of their animals to care for, and as newlyweds. Smith said he’s still hopeful that FEMA will also come through with individual assistance for people like them. But in the meantime, he said, they’re trying to stay positive and look forward.

“We’re lucky compared to so many others who lost more,” he said.

But he won’t soon forget the date the Illinois River stole his home: It was their one month wedding anniversary.

Inspired by a commercial, businesses partner to bring a new food pantry storage shed to Karnak

After the federal government again turned it down, the State of Illinois will be going to plan B to get aid for individuals in 22 counties aff…

Voice of The Southern: There are intangibles for FEMA to think about when it comes to flood victims

Sometimes the math doesn’t add up. 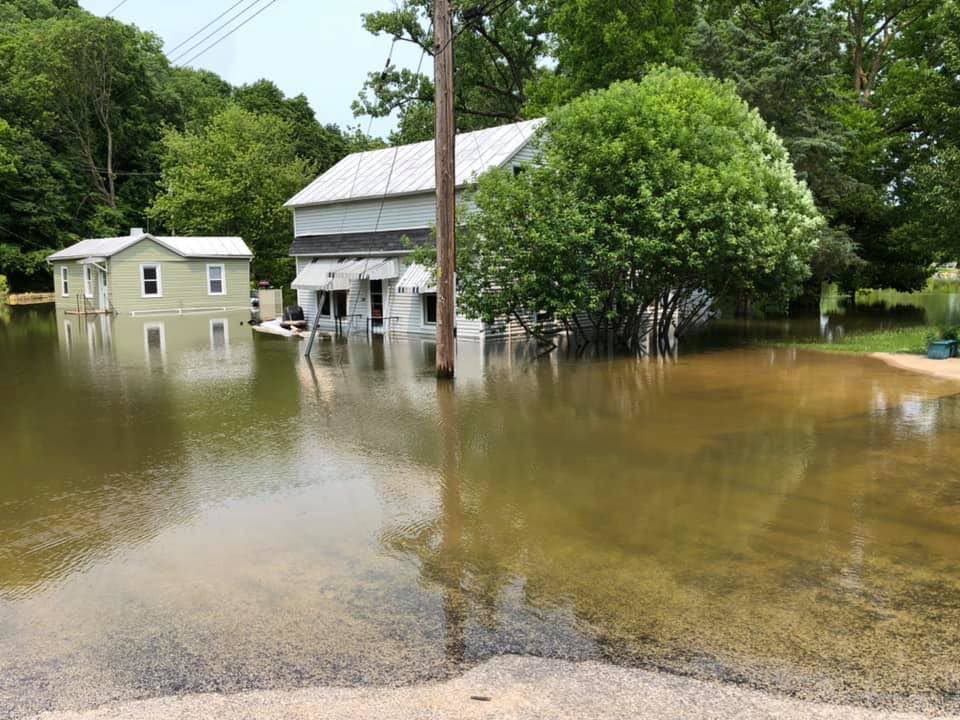 The Smiths' home in the west-central Illinois village of Hardin took in 4 feet of Illinois River floodwater on May 6. 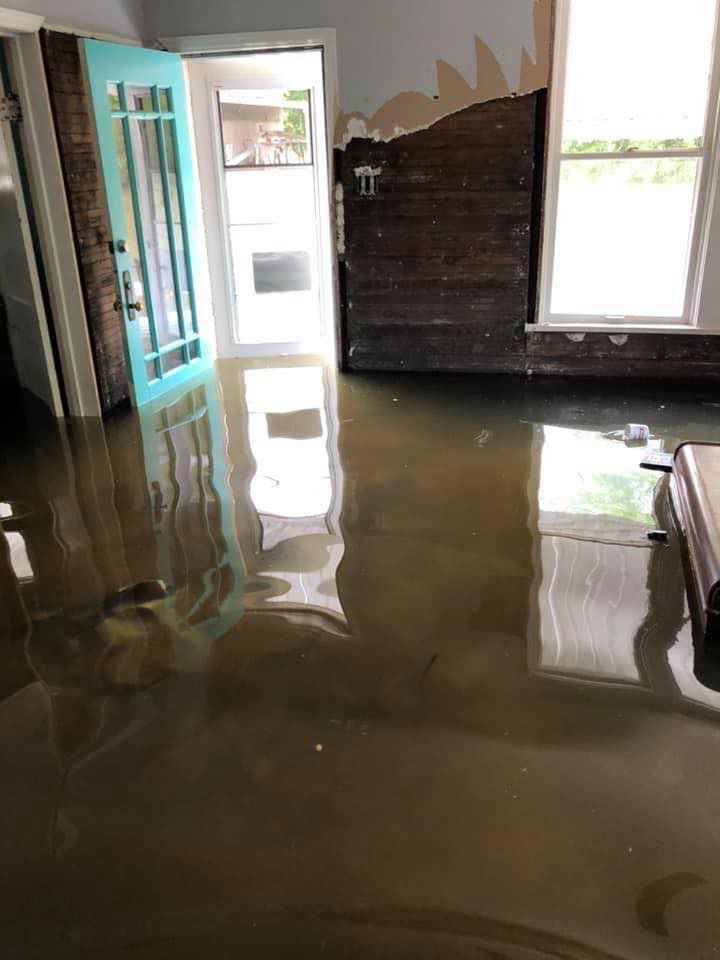 The Smiths' living room is shown here covered in floodwater.