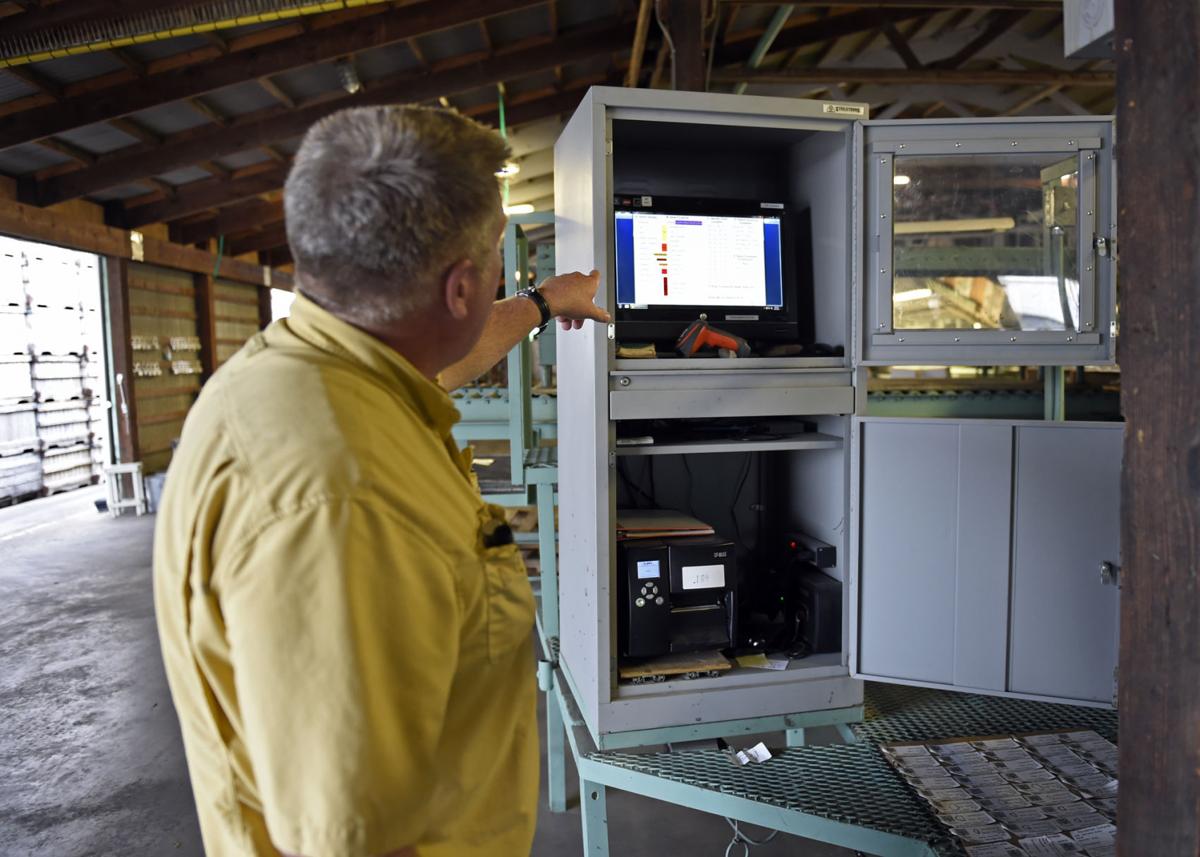 Wayne Sirles, vice president of Rendleman Orchards, explains how the company uses technology to track the apples being processed at their facility near Alto Pass. 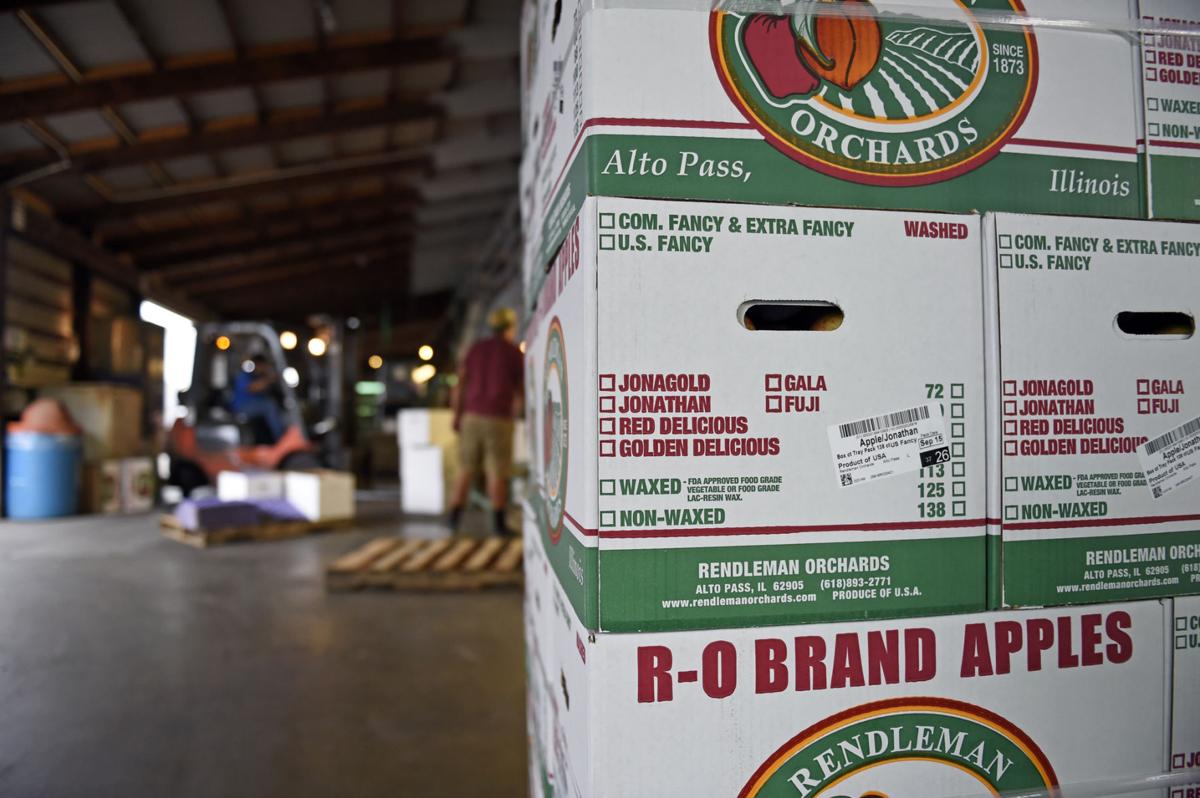 Packing labels on boxes of apples from Rendleman Orchards provide a wealth of information. 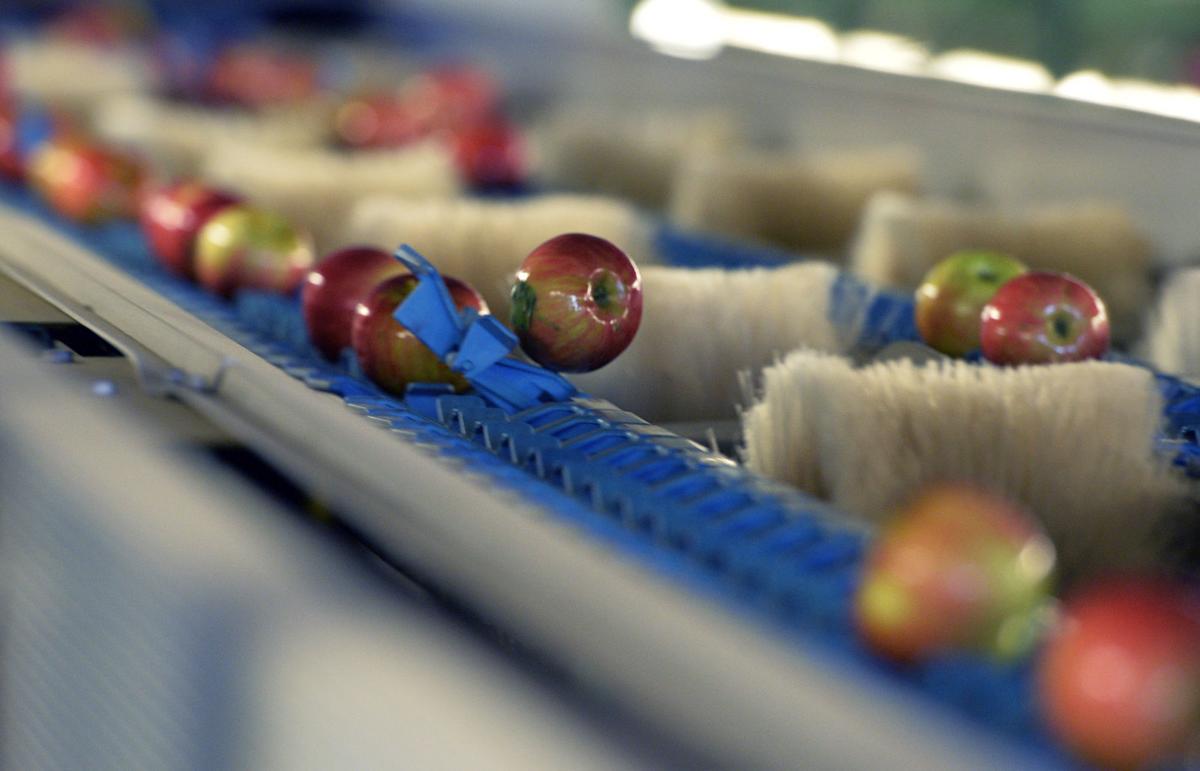 Apples are sorted by weight and-or size on the electronic weight sizer at Rendleman Orchards near Alto Pass.

Illinois Humanities hosted the third and final installment of its “Seeding Change? The Future of Our Farms and Communities” in August at the Old Feed Store in Cobden. This traveling program series gathered people to talk about the future of agriculture and rural Illinois communities.

The event, part of a larger series focusing on the future of agriculture in central and Southern Illinois, featured a presentation about how technological innovation might change the future of small farms and industrial agriculture by King. Other presenters and audience members were invited to respond from a regional perspective, and share thoughts about how agricultural shifts could affect local communities in the coming years. The goal of Illinois Humanities was to start the discussion.

Meacham set the tone of the evening with a quote from “The Transformation of Rural Life: Southern Illinois 1890-1990” by Jane Adams: “Farm Families and people who have grown up in rural areas seem caught on the horns of a dilemma: the old way was materially impoverished but far richer socially than the present. Most one quality be lost in order to have the other?”

The quote resonates as much today as it did when the book was originally published in 1994. It opened the way for King’s discussion of how farming is changing and the growing role of technology in farming.

“Everyone knows the Midwest is the agricultural center of the U.S., but it wasn’t something I ever had to be told,” King said.

King, who grew up on a farm in rural Michigan, said our ancestors would be very familiar with the principles of farming today, but the practices would be very different from their farming experiences.

But today’s innovations go much further and are computer-driven. Those include data driven agriculture, which uses sensors and computers to monitor field and crop conditions; self-driving tractors; farm drones that can monitor crops or create maps for chemical use; and systems that link farm implements and yield monitors to track field productivity.

“But are they actually good for the average farmer?” King asked.

He also discussed the “eat local” trend, calling people who want to eat food grown close to home locavores. He added that the this trend has given rise to an interest craft, hand-made processes and slow living, as well as people beginning small farms.

King added that one quarter of all farmers are beginning farmers.

“The desire to eat locally has seen a huge rise in farmers’ markets and also in CSAs or community supported agriculture,” King said. “Is the locavore helping farmers?”

Plumer works mostly with farms that have between 15,000 and 40,000 acres. He said we must continue increase our food production if we are going to feed the world’s population, adding that U.S. farmers are the most efficient in the world.

A normal goal of a farmer in the U.S. is to produce 160 to 170 bushels of corn or soybeans per acre. Last year, one Georgia farmer broke 500 bushels per acre.

“We also have to look at the economics. Is it economical and feasible?” Plumer said.

One issue in the U.S. is degraded soils. Illinois soils have been degraded after only 200 years of farming, while farms in Africa are not seeing the same issues even after farming much longer.

One way farmers share what they’ve learned is through blogs like Ag Talk. A farmer can ask a question on the blog, and those who have experience in that area can respond. Since the internet-based blogs have no boundaries, a farmer in one part of the U.S. can learn from other farmers across the country and possibly the world.

Plumer also said some technology is too expensive for small Illinois farms.

“Do we feed the world by using technology and risk our water quality and soil?” Plumer asked.

Sirles, a fifth generation farmer, works on at a farm and orchards that have been in his family 140 years. Rendleman Orchards employs about 70 people in the growing and harvesting seasons and 18 to 20 during the winter months. Their operation grows, packs, sells and markets produce and fruit to grocery stores.

“People want to know where their food comes from and how it is grown,” Sirles said.

Rendleman Orchards uses cover crops to sustain their environment and maintain the soil on their hilly farm. They also use GPS to help with soil samples and create maps for chemical use.

To see technology in use at Rendleman Orchards, visit the packing shed.

As apples are picked in the orchard fields, they are placed in large wooden bins. Those bins travel by tractor load to the packing shed. A computer at one end of the apple line prints labels, and each crate is labeled as it comes into the shed.

“We can trace an apple all the way from the field to the end user,” Sirles said.

As labels are printed, information is registered in a database. The database makes it easy to not only track the fruit, but also to see the productivity of each field and variety. The database is networked with the farm’s Quick Books accounting software to create inventory which is used by the ordering system to know what is available for sale.

The apples start down the packing lines by first being floated out of the bins. The water is chlorinated to help reduce contamination. Apples are then sorted to remove the fruit that has large spots and brusing.

Next the apples are sorted by grade by a group ladies and washed. The USDA sets the grades of apples, and Apples of lower grades may not be as pretty as top grades, but the grading system does not take flavor or sugar contest into consideration. The number 1 grade continues down the packing line. Other grades are sorted for use in processing, such as making cider or applesauce.

“Some of these ladies have worked for Rendleman Orchards for years. They are well-trained and good at what they do,” Sirles said.

Apples are washed in a sodium hyperchlorite through a system that includes 30 brushes. The system is controlled by computer and includes a series of sensor probes that monitor the washing solution for levels of chlorine, temperature and electrical conductivity.

“It automatically injects chlorine to keep the proper levels and acidifier to keep Ph at proper levels. It’s all run by computers,” Sirles said.

Apples then travel through the electronic weight sizer, which divides them by weight. It also is controlled by computer and can sort apples to within an ounce of weight. Sirles can control the mix of apples by size, depending on the needs of his customers.

One of the few things the orchard cannot control is the weather.

“Farmers are some of the most adaptable people I know because the weather rules our lives,” Sirles said.

Dennis Watson, associate professor of plant, soil and agricultural systems at SIU, said technology is already being used on many farms.

“We are getting into harvest time right now. The technology in combines can tell as they go through the field what the yield is,” Watson said.

They can also use grain carts that coordinate movement with a combine. The combine tells the tractor where it needs to go, how fast it moves and when it dumps its grain.

At a recent Farm Progress Show in Iowa, Case IH demonstrated a tractor that had no cab. Watson said the tractor could make its own decision where to go by knowing the boundaries of a field.

“We are not at the point where op are ready to send a tractor out on its own,” Watson said.

Some computer software is cloud-based, but what happens if a farmer changes software. Watson suggests backing data up on a local computer.

“It’s very convenient, but with added convenience there are potential drawbacks you need to mitigate,” Watson said.

Farm Focus: A look at agriculture in Illinois

Regarding plant populations, farmers are finding that while less may not mean more, more doesn’t necessarily mean more, either.

Rendleman Orchards is celebrating its 145th growing season this year.

Wayne Sirles, vice president of Rendleman Orchards, explains how the company uses technology to track the apples being processed at their facility near Alto Pass.

Packing labels on boxes of apples from Rendleman Orchards provide a wealth of information.

Apples are sorted by weight and-or size on the electronic weight sizer at Rendleman Orchards near Alto Pass.