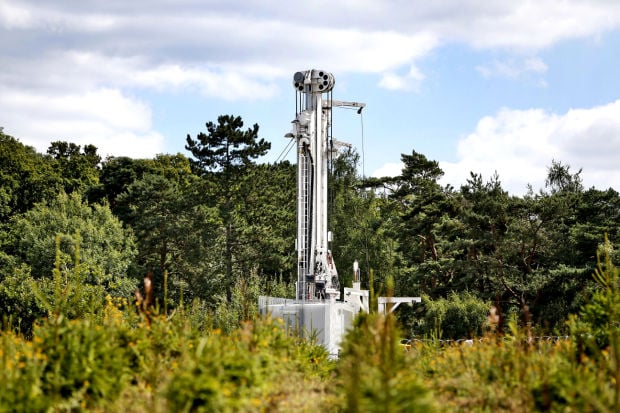 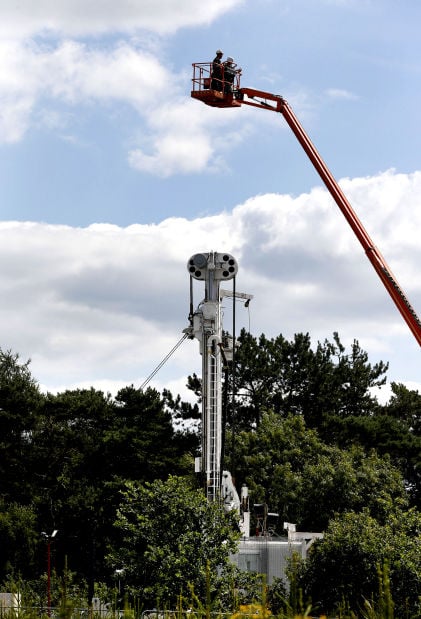 View of the Cuadrilla exploratory drilling site, as Cuadrilla employees survey the scene from a cherry picker in Balcombe, West Sussex, England, as anti-fracking demonstrations by environmental activists continue at the site, Tuesday, Aug. 20, 2013. (AP)

Most speakers were opponents of fracking.

The sole purpose of the hearing conducted by the Illinois Department of Natural Resources was to gather views and comments on the rules proposed for the act that was signed into law last June.

The Carbondale hearing was the final of five hearings scheduled around the state.

More than 250 people attended the hearing, expressing concerns about the proposed rules and the fracking process.

And heard they were Thursday night.

For just more than two hours, citizens took turns in four-minute increments to raise questions about the process and the possible effects it could have on the health and safety of the region’s residents, wildlife, environment, water, soil and air quality — as well as the economy.

Many commenters said they were worried about whether the rules were strong enough to ensure a safe water supply and avoid contamination of water and soil. Some discussed the possible dangers of the chemicals involved in the process while some spoke of the need for tougher regulation of the industry.

Others talked about fears that the process could trigger earthquakes in an area that sits between the New Madrid and Wabash Seismic Zones.

“The proposed administrative rules place the people of Illinois in grave danger,” Carbondale activist Treesong said. “Fracking is not safe and it cannot be made safe with a set of haphazard rules.”

Some citizens spoke about the need for more local input, involvement and control.

Health departments are the guardians of water resources, Jackson County Health Department Director Miriam Link-Mullison said. She asked that the rules be increased to enhance local control and the information released to public health departments in regards to the drilling operations.

“The best medicine is always prevention. If there are spills, we want to know as soon as possible,” she said.

Link-Mullison and other commenters also requested more testing and monitoring during well operations.

Several people demanded either an outright ban on fracking or at least a two-year moratorium to allow for more study and more public input.

Marion resident Wendell Lambert was one of the audience members who came to the public hearing to listen and learn.

“It’s a lot more complicated than I thought,” he said. “There seem to be a lot of strong feelings about it.”

Public comments will be accepted online or by mail through Jan. 3. IDNR will review the comments and decide whether the proposed rules should be amended before they are submitted to the Joint Committee on Administrative Rules of the General Assembly for approval.

Tornadoes not covered in fracking rules

Proposed rules that will regulate high volume horizontal hydraulic fracturing in the state fail to mention tornadoes, an oversight some people…

Fracking to appear on March ballot in Johnson County

VIENNA — A question on the March ballot will give Johnson County voters a voice on the issue of high-volume horizontal hydraulic fracturing.

What next in debate over fracking?

SPRINGFIELD — The clock is winding down on Illinoisans hoping to influence new rules governing the controversial practice of fracking.

View of the Cuadrilla exploratory drilling site, as Cuadrilla employees survey the scene from a cherry picker in Balcombe, West Sussex, England, as anti-fracking demonstrations by environmental activists continue at the site, Tuesday, Aug. 20, 2013. (AP)