SPRINGFIELD — Illinois Gov. J.B. Pritzker’s administration estimates state revenues will come up billions of dollars shorter than expected this fiscal year and next due to the novel coronavirus’s economic impact.

The Governor’s Office of Management and Budget revised revenue estimates downward by $2.7 billion for the state’s current fiscal year, which ends June 30. About $1 billion of that decline is due to the three-month extension of the income tax filing deadline.

The impact to Illinois’ next fiscal year, beginning July 1, is two-fold. GOMB estimates the state will experience a shortfall of at least $4.6 billion in revenue, which, coupled with short-term borrowing needed this fiscal year, means the next state budget will be $6.2 billion short.

It is a trend shared by “every state,” the governor said.

“That’s true regardless of political affiliation and regardless of how fast or slow a state’s leadership moved to implement social distancing measures,” Pritzker said Wednesday in Chicago. “Even those few states still operating without a stay-at-home order are facing massive fiscal hardships.”

The estimated budget deficit for fiscal year 2021 is $7.4 billion if voters do not approve the graduated income tax structure change Pritzker has championed since taking office.

Currently, Illinois’ constitution dictates a flat income tax framework, charging the same tax rate for all residents regardless of income. The graduated structure would allow the state to charge higher income tax rates on greater levels of income.

In response to questioning from reporters, Pritzker said that amendment may be necessary “now more than ever.”

“This isn’t about just one year — it’s about fixing the structural deficit that exists for the state,” he said. “We’re in a pandemic; we’re in an emergency. This crisis is causing a significant disruption to our fiscal year coming up, but we have many years ahead and I think a fairer tax system makes sense to me.”

The governor’s office must work with both parties in the General Assembly to pass a budget, the governor stressed, but it is unclear when the Legislature will return to Springfield for such action.

“Illinoisans are all too familiar with the pain the lack of a state budget can cause, so let me just say up front, we will not go without a state budget,” Pritzker said. “We will need to make extraordinarily difficult decisions on top of the difficult decisions that we’ve already made, but together, with the state legislature, we will make them and we will do so with an unswerving dedication to fairness.”

Pritzker said agency directors have been asked to enact spending reductions and efficiencies, and even before the pandemic, his office asked those directors to identify possible cuts and savings.

“That said, my cabinet members are hard at work realizing as much of those savings far sooner,” he said. “Beyond that, my team has been working with the treasurer and the comptroller to leverage over $700 million in other state funds to support the operations of state government.”

The Illinois Department of Public Health on Wednesday reported an increase of 1,346 confirmed COVID-19 cases in Illinois in the previous 24 hours, bringing the total to 24,593 in the state. Residents in 89 counties are affected.

There were 80 additional virus-related deaths in 12 counties over that same time, bringing the state’s total fatality count to 948.

Dr. Ngozi Ezike, the department’s director, said “community mitigation strategies” such as washing hands frequently, cleaning commonly-used items, wearing a mask when outside and social distancing are contributing to a “slowed rate of increase.”

Both she and Pritzker said the number of residents who have or had COVID-19 is likely higher than what the state reports due to lack of available tests.

“We have to stay the course,” Ezike said. “... Remember that actions that we take today will set us up for a better future. We are doing this together.”

The governor added that one “mitigation measure” he is contemplating is a mandate for residents to wear masks in public.

“Anything that we can do going forward that will protect people and at the same time make it more likely that we can have slightly different conditions for stay-at-home, better conditions, is a good move,” Pritzker said.

The governor said he will rely on epidemiologists, scientists and other experts to determine what measures should be taken to protect Illinoisans.

His administration is still considering what steps should be taken by April 30 to either lift or extend the stay-at-home order.

The governor added, “decisions need to be made soon” about schools, so parents and students have an idea of what the next two months will be like. A final determination will come “in the next two weeks,” he said.

Voice of The Southern: Thumbs up to SIUC professor, students and volunteers; thumbs down to state's finances

Thumbs up to volunteers at SIUC producing vials of liquid critical to COVID-19 fight, Jayden Scrubb, the creation of a state hotline and a new Starbucks; thumbs down to what the virus is doing to the state's finances.

In the week ending April 11, another 141,049 Illinoisans filed initial unemployment claims, bringing the total number during the latest four weeks of the novel coronavirus pandemic to more than 634,000 in the state.

Gov. J.B. Pritzker announced Thursday that he and five other Midwestern governors have agreed to coordinate with one another as they make plans for reopening their economies after the COVID-19 pandemic subsides.

A statute dating back to the early 1800s cannot be applied to daily fantasy sports betting, Illinois’ highest court ruled Thursday. Fantasy sports, the court ruled, are games dominated by skill, not by chance. 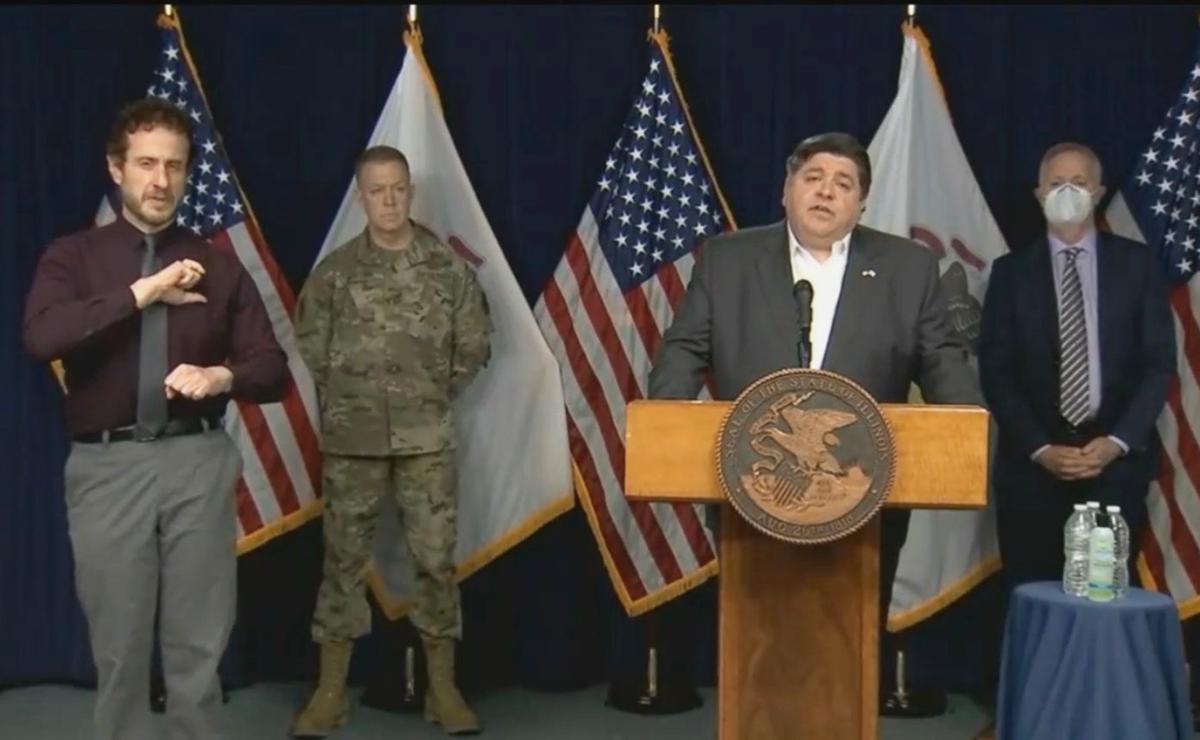 During his daily news conference Wednesday in Chicago, Gov. J.B. Pritzker says the coronavirus pandemic and the economic slowdown related to the stay-at-home order will hit the state budget hard. “We will need to make extraordinarily difficult decisions on top of the difficult decisions we’ve already made, but together with the state Legislature, we will make them, and we will do so with an unswerving dedication to fairness," Pritzker said. 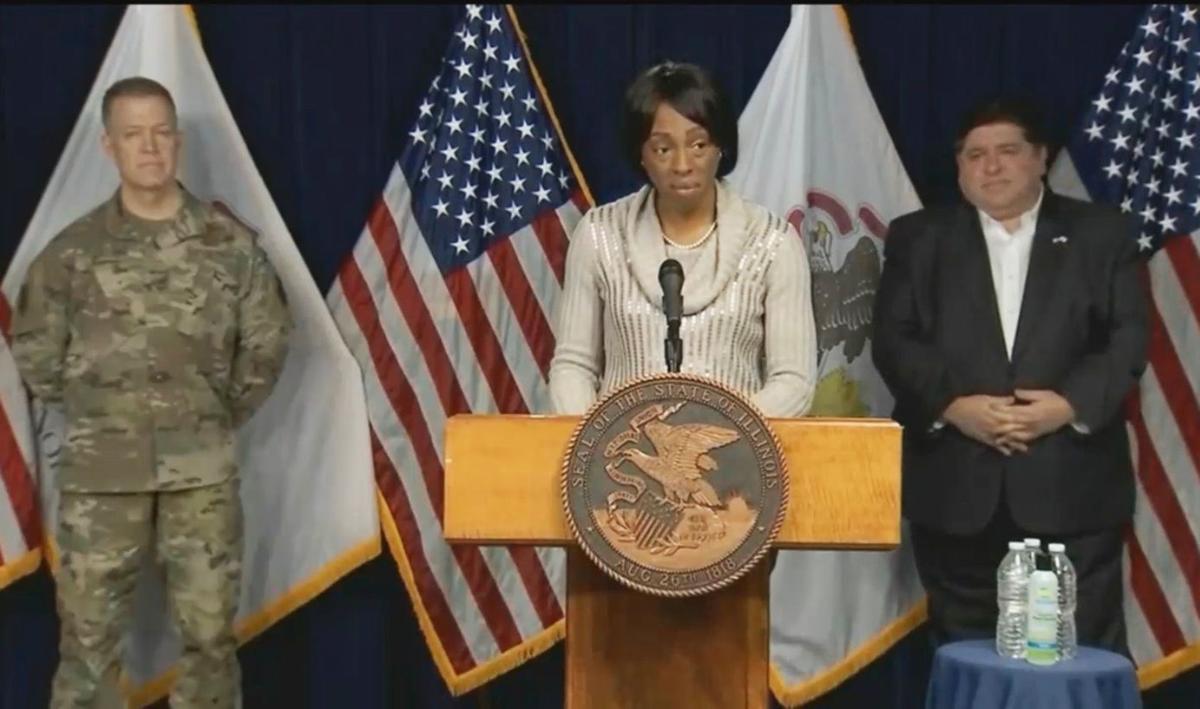 Dr. Ngozi Ezike, director of the Illinois Department of Public Health, announced during Wednesday's daily news conference in Chicago that there were 1,346 new confirmed cases of COVID-19 and 80 additional deaths in the previous 24 hours.